Malignant peritoneal mesothelioma (MPM) was first described in 1908 by Miller and Wynn. It is a rare neoplasm with a rapid fatal course. In Japan, only approximately 300 cases have been reported so far. The appearance of MPM on CT has been described in approximately 60 cases. However, few data have been reported concerning the yield of PET-CT scan in the diagnosis of MPM.

A 47-year-old man was referred to our hospital because of a 2-month history of dry cough, 2-kg weight loss, and a feeling of abdominal fullness. His medical history was unremarkable except for a fractured clavicle 2 years earlier. He worked in a construction company as a site foreman. He had been exposed to no dust since he was 20 years old, when he had been engaged in a decommissioning operation. On physical examination, the chest had absent breath sounds and dullness to percussion over the lower one-third of the right hemithorax. Laboratory examination showed normal values, including serum tumor markers. Chest radiography (Figure 1A) showed tiny nodules scattered throughout bilateral lung fields, a right pleural effusion, and bilateral hilar lymphadenopathy. Contrast-enhanced chest computed tomography (CT) demonstrated scattered tiny nodules in bilateral lung fields (Figure 1B), as well as lymphadenopathy of various sizes in hilar (Figure 1C), anterior mediastinal, pretracheal, tracheal bifurcation, cardiophrenic (Figure 2A), and intraabdominal (at the level from the celiac artery to the renal hilus, Figure 2B) regions. The CT also showed fine, nodular soft tissue (Figure 2B, thin arrow) and a large mass-like lesion (Figure 2B, thick arrow) within the greater omentum, predominantly in the left upper abdomen, suggesting omental caking. The CT also showed a moderate right pleural effusion as well as a small amount of ascites with parietal peritoneal thickening (Figure 2B, arrowhead), but no obvious pleural thickening. To further evaluate the expanding area of the unknown primary origin tumor, after right thoracic drainage, a whole body fluorodeoxyglucose (FDG) positron emission tomography (PET)-CT scan was performed, which revealed intense standardized uptake values (SUVs; 2.6-3.7) in the area mentioned above (Figure 2C,D). The right pleura was partially enhanced, which was considered to be the result of right thoracic drainage, however, no intense SUVs were noted in the pleural cavity. 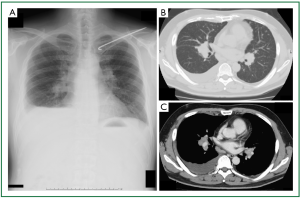 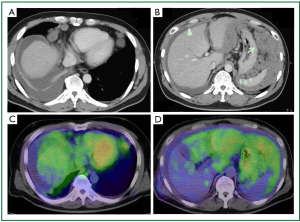 Figure 2. Chest CT taken on the first visit demonstrates cardiophrenic (A), and intraabdominal lymphadenopathy (B). The CT findings also show a small amount of ascites with smooth parietal peritoneal thickening (B, arrowhead), fine, nodular soft tissue (B, thin arrow), and a large mass-like lesion (B, thick arrow) within the greater omentum, predominantly in the left upper abdomen. PET-CT scan taken 3 weeks after his first visit to our department depicts the intense SUV of subphrenic lymphadenopathy (C), and intraperitoneal cavity (D), especially in the omentum. PET, positron emission tomography.

To make a diagnosis and characterize the multiple lung nodules, partial resection of the right lower lobe by open lung biopsy with sampling of mediastinal tissue and a right phrenic nodule was performed. On macroscopic examination (Figure 3), multiple white-colored nodules as large as 3 mm in size were scattered in both the parietal (asterisk) and visceral pleura (double asterisk). On hematoxylin and eosin staining of right lower lobe specimen (Figure 4A, 40×), atypical cells could be seen to have infiltrated within the visceral pleura and connect to the interstitium in the myxoid background. On the magnified image (Figure 4B, 400×), these atypical cells formed tubular and papillary patterns and were cuboidal in appearance, with atypical nuclear features, a high nuclear to cytoplasm ratio, and little to moderate amounts of eosinophilic cytoplasm. The specimen was positive for calretinin (Figure 5A), hector barrifora-mesothelin-1 (HBME-1) (Figure 5B), WT-1 (Wilm’s tumor-1) (Figure 5C), and cytokeratin5/6 (Figure 5D) and negative for cartinoembryonic antigen or thyroid transcription factor-1 (TTF-1) (Table 1). Thus, the patient was diagnosed with malignant mesothelioma, epithelial type. The patient was treated with cisplatin (75 mg/m2) and pemetrexed (500 mg/m2) for 4 cycles, which resulted in a partial response. However, 2 months after completion of treatment, the disease recurred predominantly in his left upper abdominal area, and omental caking emerged again. He was again treated with the same regimen for two more cycles, but he died 1 year after the start of the second treatment. 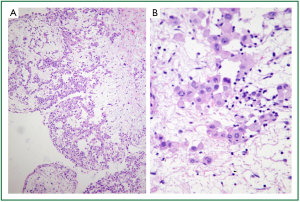 Figure 4. A. On hematoxylin and eosin staining from the right lower lobe specimen, atypical cells can be seen to infiltrate within the visceral pleura and connect to the lung parenchyma in the myxoid background; B. On magnified image (400×), those atypical cuboidal cells form tubular and papillary structures. 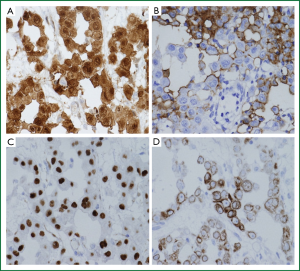 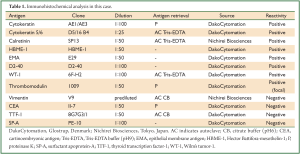 Malignant peritoneal mesothelioma (MPM) was first described in 1908 by Miller and Wynn. It is a rare neoplasm with a rapid fatal course, median survival of 6-12 months, and mean the time from symptoms to death was 345 days (1). In the United States, the incidence of MPM is reported to be only 2.2 cases per million people each year. In Japan, from 1911 until today, only approximately 300 cases have been reported (2). MPM accounts for 0.2% of all malignant disease and only 12.5-25% of malignant mesotheliomas (3,4). It usually occurs in middle-aged men who commonly complain of abdominal pain or a feeling of fullness, abdominal distention or increasing abdominal girth, nausea, anorexia, and weight loss, as in the present case. The association between mesothelioma and asbestos exposure was first described by Wagner et al., and the time from the initial exposure to the development of MPM required a mean latency period of 40 years (5). Roggli et al. (6) reported that asbestos exposure has been shown to be the etiology in 90% of pleural malignant mesotheliomas and 60% of peritoneal malignant mesotheliomas. The present patient had a history of asbestos exposure 27 years earlier. Although the mechanism for the oncogenic-process in peritoneal mesothelioma with asbestos inhalation has not been proven conclusively, it is considered to be lymphatic spread to peritoneum. MPM usually remains confined to the peritoneal cavity for most of its natural history, but metastasis to other organs has been reported via lymphatic or hematologic spread (1). The actual occurrence of metastases to the thoracic cavity and/or the extraperitoneal cavity has not been seen in a patient with MPM, though Naka et al. (7) described that the incidence and the median survival time in patients with MPM in his intense research in Japan from the year of 1911 to 1982 was approximately 12% and 5 months, respectively.

The appearance of MPM on CT has been described in approximately 60 cases, mainly as single cases or small numbers of patients (8). MPM produces two distinct patterns on CT, including diffuse involvement of the peritoneal cavity and/or focal intraperitoneal masses. The former consists of thickening of the peritoneum in a sheet-like fashion, reflecting the tumor infiltration. The latter is characterized by moderate to large-sized intraperitoneal masses, usually in the upper abdomen, and discrete nodules scattered over the peritoneum. In the present case, both patterns were seen on CT as thickening of parietal peritoneum (Figure 2B, arrowhead) and omental caking, which manifest as a peritoneal nodule (Figure 2B, thin arrow), and a large mass-like lesion (Figure 2B, thick arrow) in the omentum. However, these signs are not specific for MPM, but have been seen in other metastatic peritoneal carcinomatosis, mainly from ovary, colon, and stomach cancer, and less commonly from pancreas, uterus, and bladder cancers (9). Benign diseases such as tuberculous peritonitis, extramedullary hematopoiesis, and inflammatory disease of the mesentery have also been noted (8). Thus, the differential diagnosis between metastatic peritoneal carcinomatosis and MPM is the critical issue.

In this regard, the yield of whole body fluorodeoxyglucose (FDG) positron emission tomography (PET)-CT scan in the diagnosis of MPM needs to be considered, though few data have been reported (10,11). Yildrim et al. (12) identified malignant pleural mesothelioma by PET-CT with high specificity (92.9%) and sensitivity (88.2%). Furthermore, Tan et al. (13) showed that PET-CT identified recurrence of malignant pleural mesothelioma with high specificity (100%) and sensitivity (94%). On the other hand, Carnochan FM et al. (14) described that PET-CT under-staged chest wall, mediastinal invasion, and metastatic nodules in the lung among lung cancer patients. The major sources of variability in the SUVs independent of actual lesion characteristics are well known as patient size, standardized measurement times, plasma glucose levels, and recovery coefficients and partial volume effects (15). The present case had no specific condition which may reduce the SUVs on PET-CT. Keyes JW (15) and Cheran SK et al. (16) reported that potential limitations of PET in the evaluation of small nodules less than 10 mm which may be predisposed to false-negative results on PET-CT, either because of technical limitations of PET or low overall tumor cell volume. Indeed, the present case showed multiple scattered metastatic nodules in the chest wall of which size measured around 3 mm. This case clearly demonstrated the distribution of the MPM, with the bulk of the tumor located in the peritoneal cavity rather than in the pleural cavity on PET-CT. Those findings led us to the diagnosis of MPM. Furthermore, the present case demonstrated some of the limitations of PET-CT in the diagnosis of malignant mesothelioma with thoracic metastasis presented as scattered small nodules less than 10 mm, which resulted in false negative study. In mesothelioma, PET-CT has been evaluated predominantly in diagnosis and preoperative staging. Those findings remind us the fact that PET-CT might fail to detect the tumor despite of the aggressive pleural involvement.