Patients with cancer frequently suffer from sarcopenia (2). Sarcopenia in cancer patients is associated with various physiological and metabolic events, including systemic inflammation and alternations in basal metabolic rate. The prognosis depends not only on the cancer’s aggressiveness but also on the patient’s physical condition. Thus, sarcopenia can predict poor survival in patients with various types of cancers (3-5). Stene et al. showed that up to 71% of advanced lung cancer patients undergoing palliative chemotherapy suffered from sarcopenia (6) and had poor prognoses. On the other hand, patients who undergo surgery for lung cancer are often at early stages and have good performance status. As a result, the prevalence of sarcopenia is lower in these patients [9–56% (7,8)].

Recently, reports focusing on patients with early-stage lung cancers are increasing, and they have analyzed the effect of sarcopenia on postoperative short- and long-term outcomes (7-16). Several of these studies indicate that sarcopenia may be a useful risk assessment tool for postoperative complications as well as a prognostic biomarker. However, reports on several factors such as pathological stage, surgical procedure, diagnostic tool for sarcopenia, and the cut-off value vary. Here, we reviewed these various factors and investigated the ability of sarcopenia to predict postoperative prognosis and complications in lung cancer patients. We present the following article in accordance with the PRISMA reporting checklist (available at http://dx.doi.org/10.21037/jtd-20-3072).

We performed a systematic literature search in Medline via PubMed (155 hits) on March 1, 2020. No language restrictions and no filters were applied to the search. The search was performed using the following Mesh terms: “sarcopenia” and “lung neoplasm”, “pulmonary neoplasms”, “non-small cell lung cancer”, and “lung carcinoma”. The abstracts identified by the literature search were screened using our inclusion and exclusion criteria. If an abstract was judged as potentially relevant, the full text of the publication was screened. Selected studies were those that included the following contents: (I) sarcopenia assessed by diagnostic tools such as DEXA, BIA, or computed tomography (CT), (II) patients received surgery for lung cancer, (III) short-term outcomes (postoperative complications) or long-term outcomes [overall survival (OS), disease-free survival (DFS)], and (IV) comparing the survival of patients with sarcopenia and those without sarcopenia. Studies excluded were those that included the following content: (I) patients with small cell carcinoma, and (II) papers other than the original article. This study did not include experimentation on human or animal subjects; thus, institutional review board approval was not required.

Two authors independently reviewed the extracted information. We obtained clinical data of patients, pathological stages, surgical procedures, diagnostic tools of sarcopenia, cut off values, OS, DFS, postoperative complications and smoking history. If there was a discrepancy, the authors discussed and resolved it.

Since the meta-analysis was based on observational studies, we used the Newcastle-Ottawa Scale (NOS) as previously used (17), which consists of three factors: patient selection, comparability of the study groups, and assessment of outcomes, to assess the quality and risk-of-bias analysis of observational studies. We assigned a score of 0–9 (9 is the highest quality) to each observational study (Table 1). 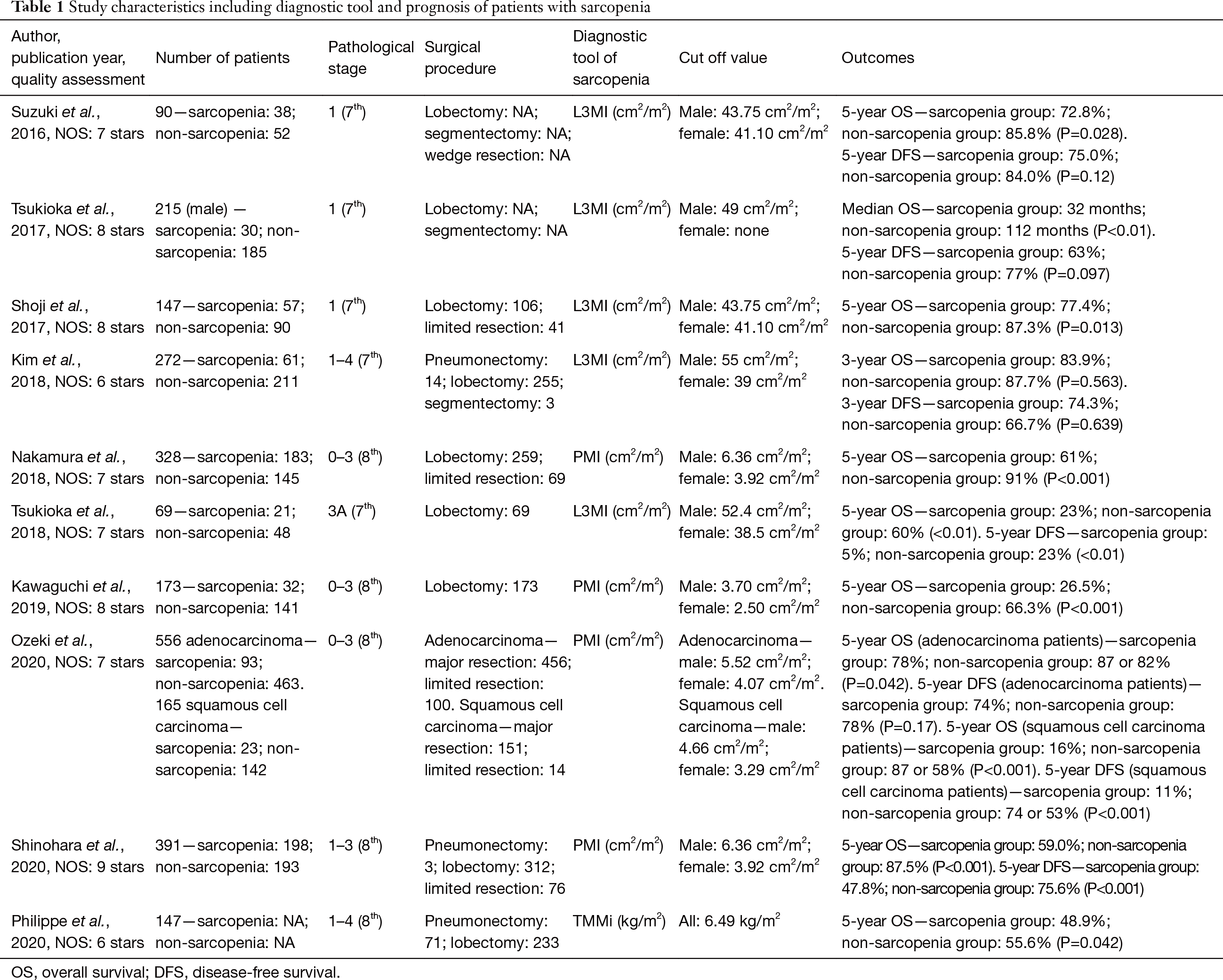 A meta-analysis was performed for perioperative complications rate and survival using Review manager version 5.3 (The Nordic Cochrane Center, Copenhagen, Denmark). Heterogeneity was assessed using I2 statistics for describing the proportion of the variability of the observed effect estimates that is caused by the heterogeneity of studies rather than sampling error. Two-sided P values <0.05 were considered statistically significant.

A flow chart of our search results is shown in Figure 1. A total of 155 articles were found in the initial research. We found 13 articles for detailed evaluation. However, some of those papers were later excluded because there was no information on survival. Finally, a total of ten retrospective studies on long-term outcomes (7-16), and six studies on short-term outcomes (8-11,13,14) were included. 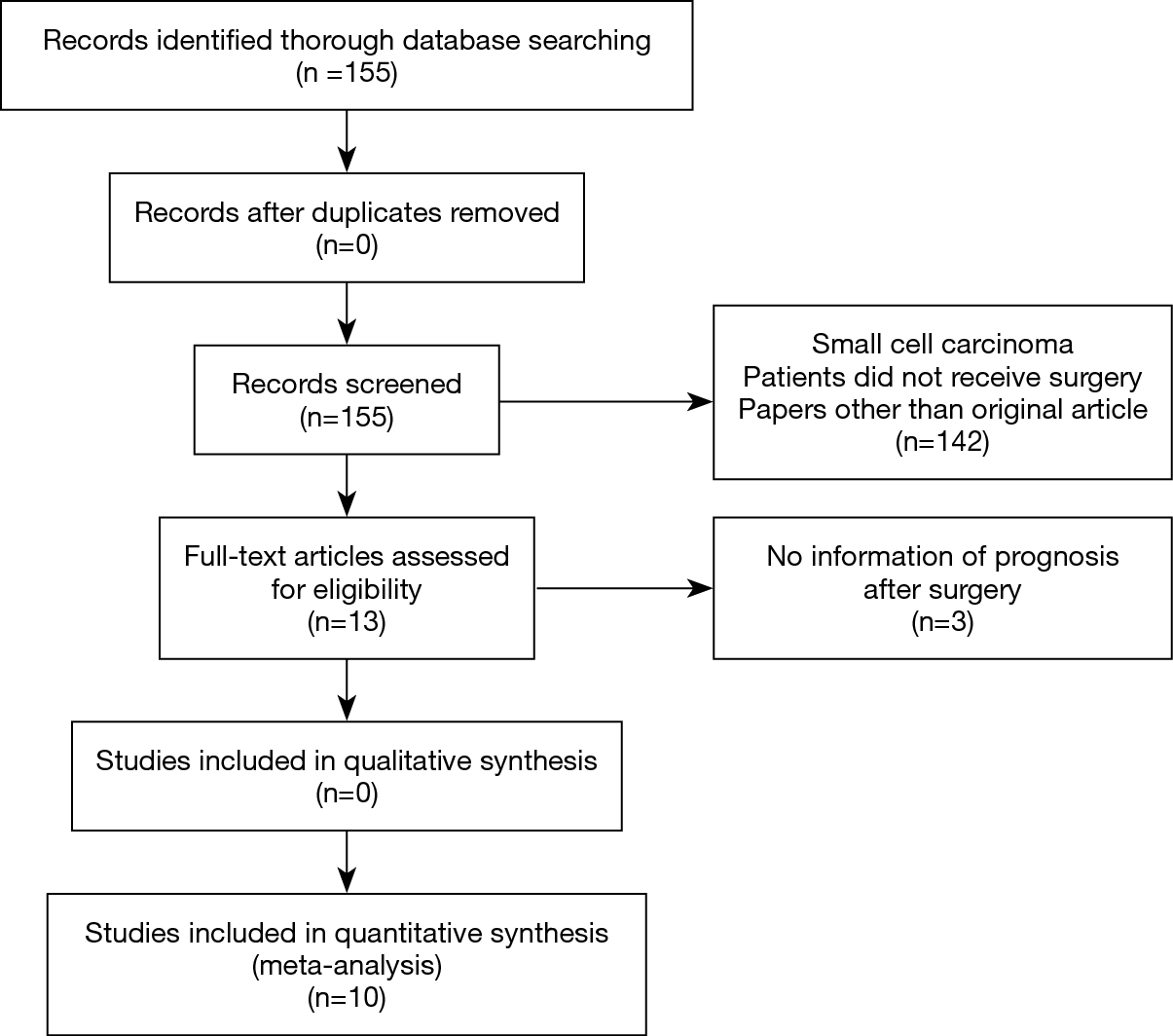 Figure 1 A flow chart describing the selection process of our study.

Patients’ characteristics and surgical details are shown in Table 1. All studies included were single institutional retrospective studies published from 2016 to 2020. The total number of patients included in this review was 2,643 patients, with the number of patients in the reviewed articles ranging from 69 to 556 patients. Although the pathological stages were mainly within 0 to 3, twelve patients with stage 4 were included in two studies. We judged this had little influence on survival since these patients were in stage 4 because of oligometastases, and these cases were few (12 out of 2,643 cases). Many surgical procedures were lobectomies, but limited resections were also performed. With the use of the Newcastle-Ottawa Scale, one study scored nine stars, three studies scored eight stars, four studies scored seven stars and two studies scored six stars (Table 1).

Sarcopenia predicts poor prognosis after surgery in patients with NSCLC

Figure 3 Meta-analysis of sarcopenia and disease-free survival. Forest plots of odds ratio for disease free survivals of each study and pooled odds ratio. 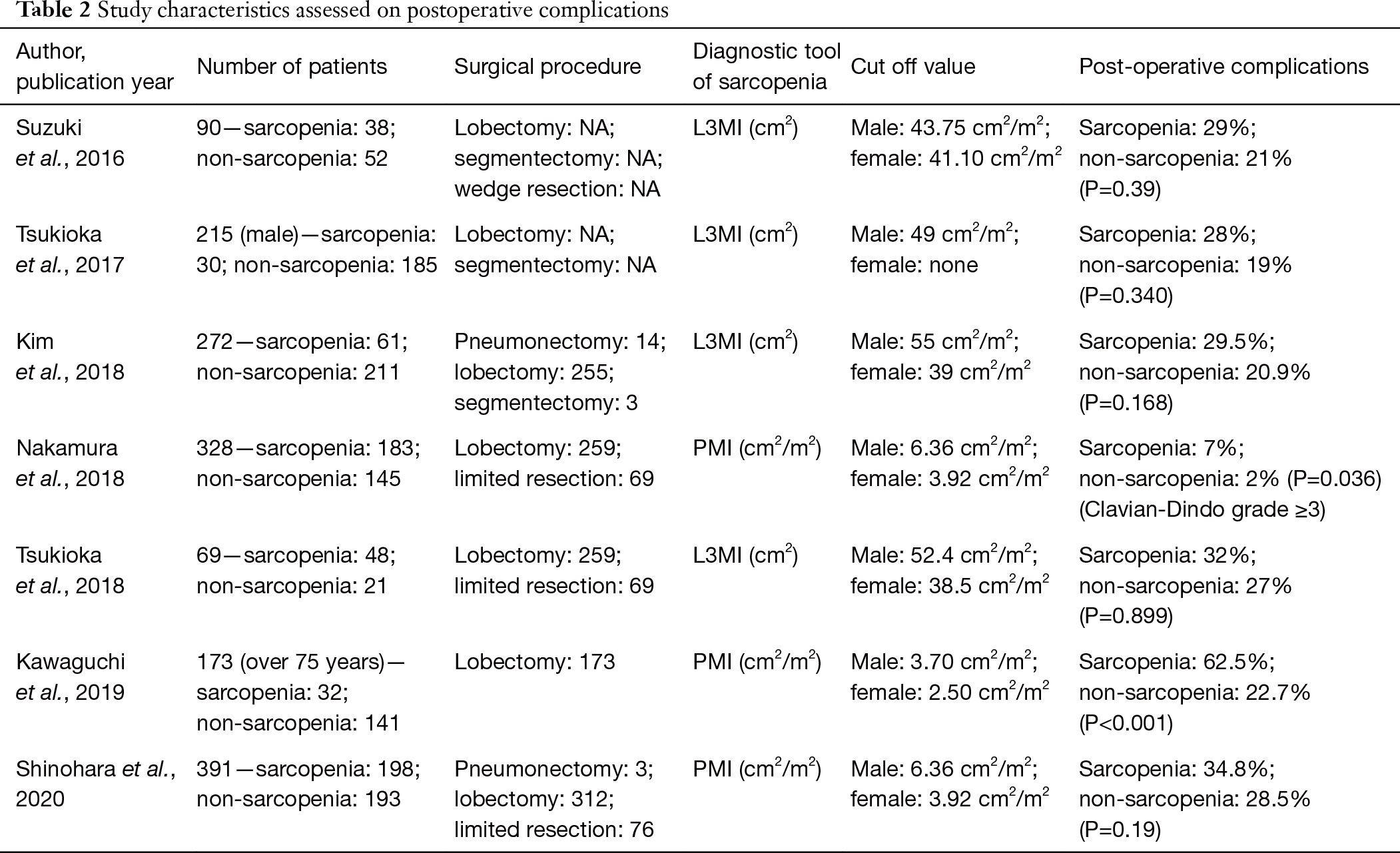 Optimal diagnostic tool and cut off value for sarcopenia

The association between sarcopenia and smoking history

Of the ten studies, five reported the smoking history of patients (Table 3). Three studies demonstrated that sarcopenia was significantly associated with smoking history, which included an ever smoker and a current smoker.

Table 3 The association between sarcopenia and smoking history
Full table

In this meta-analysis, we found significantly poor postoperative OS and DFS in lung cancer patients with sarcopenia. In patients with other types of malignancies, sarcopenia also predicted poor survival (3-5). There are four reasons for the poor prognosis after surgery in patients with sarcopenia. First, sarcopenia itself is a poor prognosis. Even if the cancer is completely in remission, the loss of muscle mass and strength continues, resulting in physical disability and death (1). Second, postoperative complications negatively affect prognosis. Patients with sarcopenia tend to have postoperative complications. The incidence of these complications may strongly predict a poor prognosis because physical ability is decreased by complications, resulting in poor responses to treatment for not only cancer but also other diseases (18). Third, a tumor occurring in sarcopenia patients has a more malignant potential than that occurring in patients without sarcopenia. As a result, even if the pathological stages were the same in both sarcopenia and non-sarcopenia patients, the tumor recurrence will be frequently observed in sarcopenia patients (11). Finally, the most interesting theory is that muscles have a potential tumor inhibitory effect via the help of myokines. Skeletal muscles have recently been identified as secretory organs, that produce myokines, which suppresses the growth of cancer cells and are involved in the control of immune cells (19,20). For example, muscle-derived myokines, such as Oncostatin M, Irisin, and SPARC inhibit the growth of mammary and colonic cancer cell in vitro (21,22). In a study using mouse models, wheel running exercises induced muscles to release IL-6, and this muscle-derived IL-6 mobilize natural killer cells to attack tumors and reduces tumor growth (23). Furthermore, exercise-induced catecholamines activate the Hippo Tumor Suppressor Pathway to reduce tumor growth (24). Ozeki et al. reported that high volume muscle mass group prolonged DFS after surgery in patients with squamous cell carcinoma, which might indicate the tumor inhibitory effect via myokines (7).

Based on these results, sarcopenia can be used to identify patients at a high risk of postoperative complications, and it requires intensive care after surgery. Furthermore, surgeons can consider a less-invasive treatment such as limited resection or stereotactic irradiation for patients with sarcopenia (27).

It is unclear whether therapeutic intervention for sarcopenia prevents postoperative complications or improves OS and DFS (29). However, we believe that sarcopenia can become a treatment target when trying to improve outcomes in NSCLC patients who have undergone surgery. Treatment for sarcopenia consists of three approaches: exercise, nutrition, and medication (Figure 5).

Physical inactivity increases the risk of development of colon (30) and breast cancers (31). Some studies in patients with breast cancer have shown the association between exercise after cancer diagnosis with improved survival (32,33). For example, Chen et al., demonstrated that patients who engaged in exercise regularly during the first six months after diagnosis had significantly higher OS and DFS (HR: 0.62, HR: 0.39, respectively) than those who did not exercise (32). However, it is challenging to define “exercise” because the type and strength of exercise in studies vary, for example walking, gymnastics, body building and traditional Chinese exercises. Some reports recommend about 2.5 hours each week of moderate-intensity physical activity, like walking, as exercise (32,33); this may be reasonable to perform routinely, and it demonstrated an improving prognosis.

Nutrition is also crucial in the treatment of sarcopenia; however, there are few reports on nutritional interventions. In lung cancer patients, sarcopenia was significantly associated with an inadequate intake of protein (34). Eicosapentaenoic acid (EPA), docosahexaenoic acid (DHA), and (n-3) fatty acids from fish oil have immune-modulating effects and may improve nutritional status in cancer patients. These dietary supplements contribute to weight maintenance and improvement of walking function (35). Two feasibility studies evaluated the multimodal therapy of exercise and nutrition. In the Pre-MENAC research, the treatment arm consisted of celecoxib 300 mg once daily, EPA 2 g/day, training, and nutrition guidance for patients with lung and pancreatic cancer. Patients in the treatment arm increased in weight more than those in the control arm; however, muscle mass was not different between the two groups (36). In the MEXTAC study, supplements rich in branched-chain amino acids, nutrition guidance, and exercise were given to elderly patients with lung cancer, which showed proper compliance and safety (37). These studies are now in phases 3 and 2, respectively.

Several studies have indicated that smoking may contribute to the development of sarcopenia (41). In our study, three studies showed the number of patients with smoking history were larger in sarcopenia than non-sarcopenia. So, quitting smoking may become one of the therapies for sarcopenia.

These above-described interventions focused on patients with advanced cancer. However, we believe that interventions for sarcopenia with a resectable lung cancer also improve their prognosis. Presently, we propose exercise and an improvement of the nutritional status. Muscle mass can improve with exercise and the administration of nutrients (42), which can improve their prognosis.

Several limitations existed in this study. Due to the observational design of the included studies, the respective meta-analysis may be affected by the biases found in the original data. Especially we should be careful for three biases. One is a publication bias, which were tested by funnel plot for the analysis of OS, DFS and postoperative complications, and these plots had a symmetrical appearance (Figure 6). Second, there was heterogeneity in the assessment or definition of sarcopenia. In addition, the tumor stage and the number of patients involved in the analysis of the prognosis in each article was varied. Third, our extracted papers are biased toward the Asian countries (Japan: 8, Korea: 1, and France: 1).

In conclusion, the results of this systematic review and meta-analysis demonstrated that resectable NSCLC patients with sarcopenia had significantly worse OS, DFS, and frequent development of postoperative complications than that of patients without sarcopenia. To diagnose sarcopenia, CT-based skeletal muscle measurements, like PMI, were useful. In the future, it is necessary to explore the mechanisms of sarcopenia and the roles of optimal intervention, such as exercise, nutrition, and drug therapy in its management.

Reporting Checklist: The authors have completed the PRISMA reporting checklist. Available at http://dx.doi.org/10.21037/jtd-20-3072

Conflicts of Interest: All authors have completed the ICMJE uniform disclosure form (available at http://dx.doi.org/10.21037/jtd-20-3072). The authors have no conflicts of interest to declare.

Ethical Statement: The authors are accountable for all aspects of the work in ensuring that questions related to the accuracy or integrity of any part of the work are appropriately investigated and resolved. This study did not include experimentation on human or animal subjects; thus, institutional review board approval was not required.