Chronic obstructive pulmonary disease (COPD) is a common respiratory disease affecting ≥5% of the population (1). The prevalence of COPD among the population aged ≥40 years ranged between 13.1–14.6% during 2010-2015 in Korea (2). COPD is currently the fourth leading cause of death in the United States (3). It is the 8th leading cause of death in Korea with a 5-year mortality rate of 25.4% (29.9% in males and 19.1% in females) (4). Patients with COPD struggle with the disease and the associated financial costs. COPD is a costly disease and the burden increases with increasing prevalence. In 2010, COPD-attributable costs for both direct medical care and absenteeism in the US were estimated USD 36 billion, with an expected rise to USD 49 billion by 2020 (5). The estimated total costs for COPD were approximately 1.245 billion USD in Korea in 2015 and direct non-medical costs, such as nursing costs made up the largest percentage (39%) (6). Meanwhile, the average number of days of out-patient care and hospitalization for COPD were 40±36 and 11±33 days, respectively (7). Lost days for care in COPD lead to an inability to work and unemployment. Predictably, an inverse relationship exists between the prevalence of COPD and income levels. COPD prevalence is 1.5–3 times higher among people with low socioeconomic status than among those with higher status and low-socioeconomic status patients occupy two-thirds of the COPD population despite comprising <20% of the general population (8). COPD patients of a lower socioeconomic status tend to have higher rates of emergency room visits and hospitalizations due to acute exacerbations (9). By the way, COPD is linked to several conditions, such as lung cancer, cardiovascular disease, osteoporosis, psychiatric illness, and cognitive dysfunction that may require hospital admission (10). However, the burden of hospitalization for comorbidities has not been well-elucidated in COPD. In addition, the association between the severity of obstruction and the burden of hospitalization rates and costs has not been well-evaluated in COPD.

The present study evaluated the association between economic status and hospitalization rate with the severity of COPD using data from the Korean National Health and Nutrition Examination Survey (KNHANES) collected for 2007–2015. We present the following article in accordance with the STROBE reporting checklist (available at http://dx.doi.org/10.21037/jtd-20-2683).

We analyzed the KNHANES data for 2007–2015. KNHANES is a national surveillance system that has been assessing the health and nutritional status of Koreans annually since 1998. It is an ongoing, population-based, nationwide, cross-sectional survey conducted by the Korea Centers for Disease Control and Prevention (KCDC). KNHANES encompasses approximately 3,800 households across 576 survey areas selected to represent the civilian non-institutionalized South Korean population. Stratified, multistage, and clustered sampling based on National Census Data is used to ensure that survey results represent the general Korean population (11). Results from each year can be merged into a combined database that allows the review of health trends over long periods. All KNHANES survey protocols were approved by the KCDC institutional review board (2015-01-02-6C). Written informed consent was obtained from all the participants and all procedures were conducted in accordance with the Declaration of Helsinki (as revised in 2013).

KNHANES has three component surveys: a health interview, health examination, and nutritional survey. The health examination includes a pulmonary function test (PFT) that is performed in subjects ≥40 years by well-trained technicians following the American Thoracic Society European Respiratory Society criteria for standardization using a dry rolling-seal spirometer (Vmax-2130, Sensor-Medics, Yorba Linda, CA, USA). The diagnosis of COPD should be based on the post-bronchodilator PFT findings under the criteria of the Global Initiative for Chronic Obstructive Lung Disease (GOLD) guidelines. However, the KNHANES is not specifically designed to the diagnosis of COPD and post-bronchodilator PFT was not available, therefore, pre-bronchodilator PFT findings were used in the present study. When the ratio of forced expiratory volume in one second (FEV1) to functional vital capacity (FVC) was <0.7, subjects were considered to have COPD. The severity of airflow limitation was classified according to the GOLD criteria (stage I: mild FEV1 ≥80%, stage II: moderate 50%≤ FEV1 <80%, stage III: severe 30%≤ FEV1 <50%, and stage IV: very severe FEV1 <30%).

Continuous variables were presented as means ± standard deviations and categorical data as frequencies and percentiles. Intergroup comparisons of continuous variables and categorical data between the two groups were performed with t-tests and chi-square tests, respectively. Multiple group analysis among the four stages of COPD GOLD and non-COPD was done with ANOVA. Binary logistic regression analysis for hospitalization with each stage of GOLD was done and adjusted for age, sex, smoking status, and household income. The results were analyzed using SPSS version 16.0 (SPSS Inc., Chicago, IL, USA). Two-tailed analyses were conducted and P values <0.05 were considered significant. 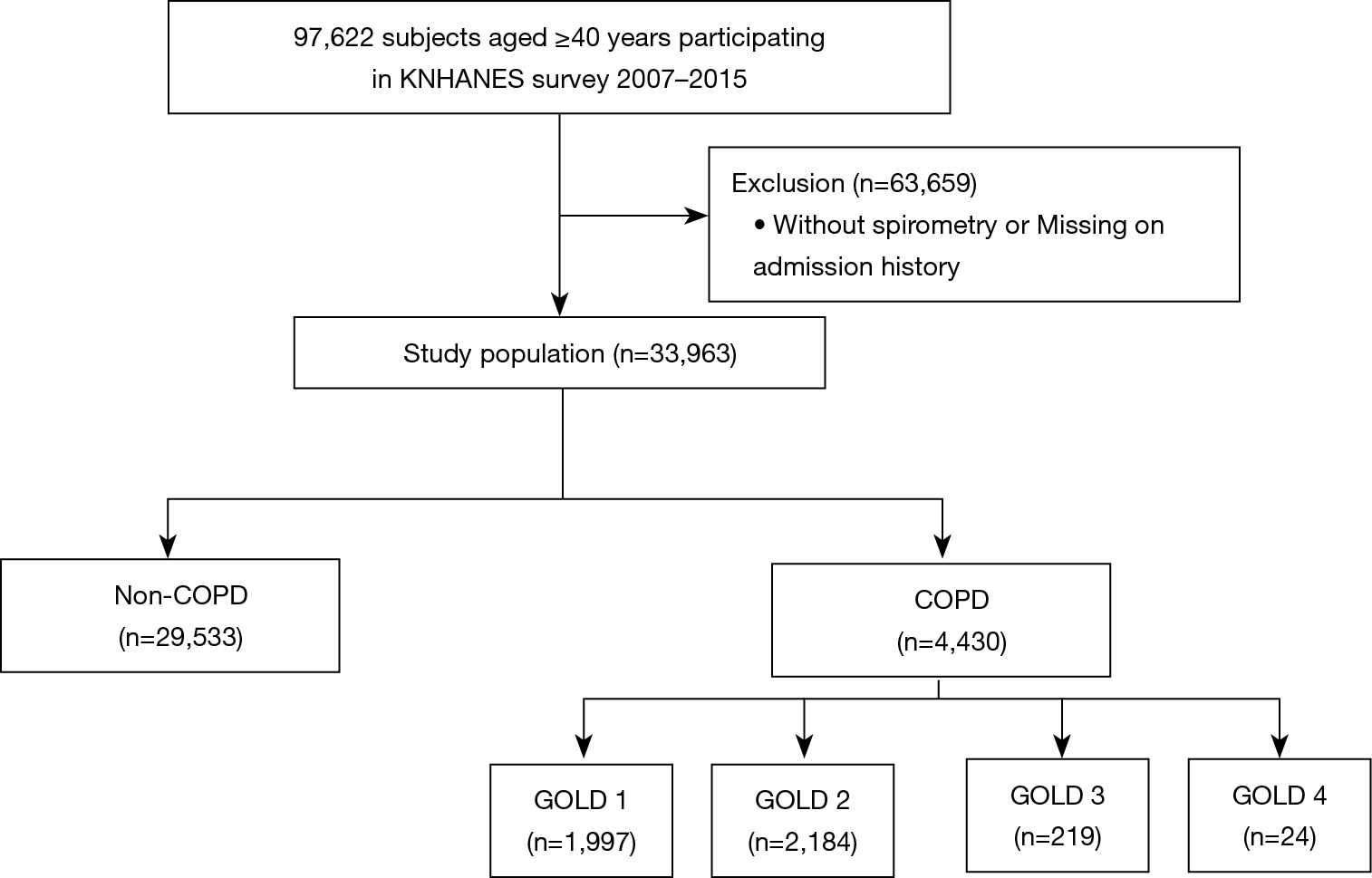 Comparison of characteristics between participants with and without COPD 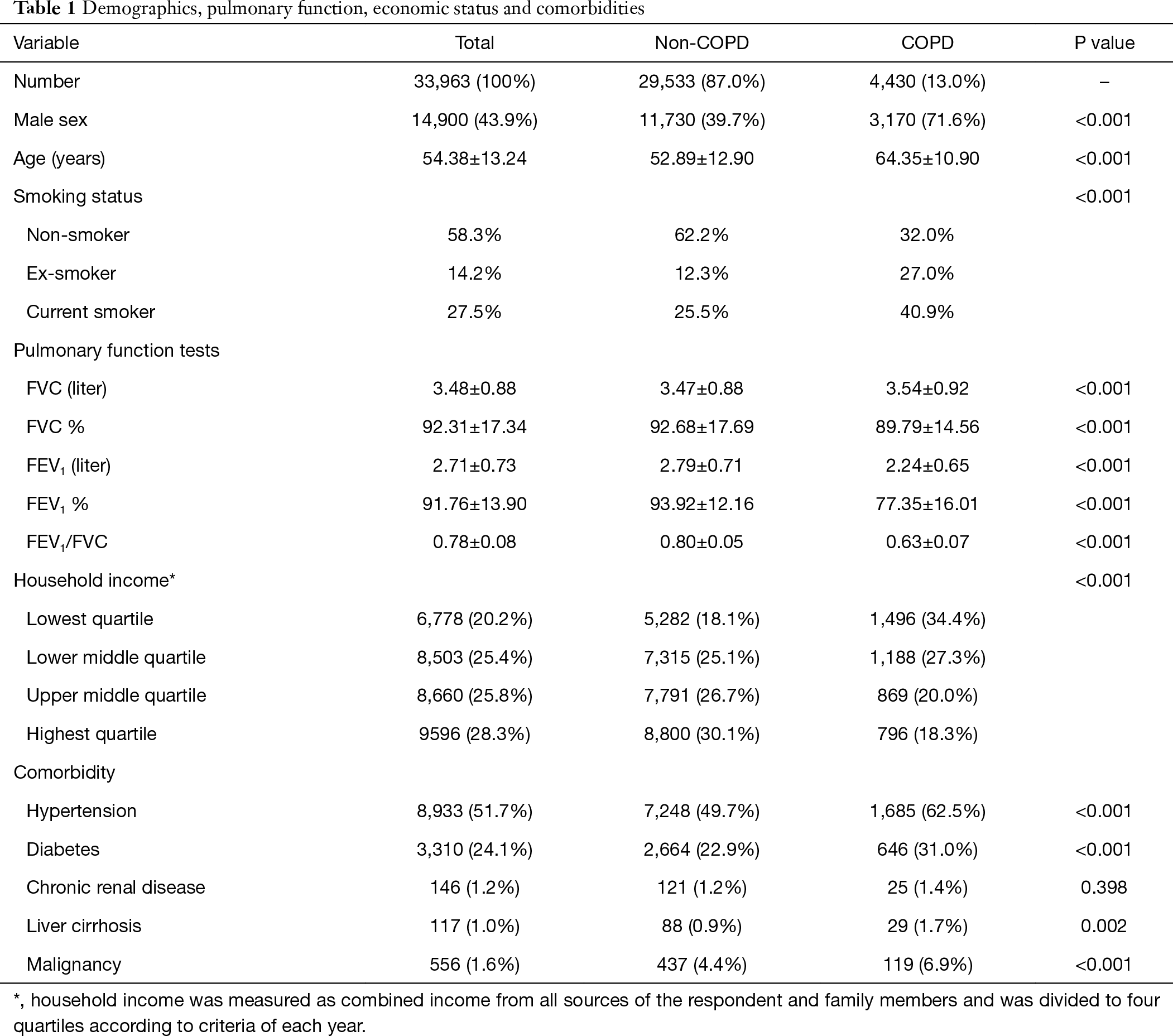 As the stage of COPD advanced from GOLD 1 to 4, the current smoking rate increased, while the percent predicted FEV1 decreased as expected. The proportion of the lowest quartile of household income increased significantly in the late stages of COPD (GOLD 1–4; 35.2%, 32.1%, 44.9%, and 70.8%, respectively, P<0.01) (Table 2). 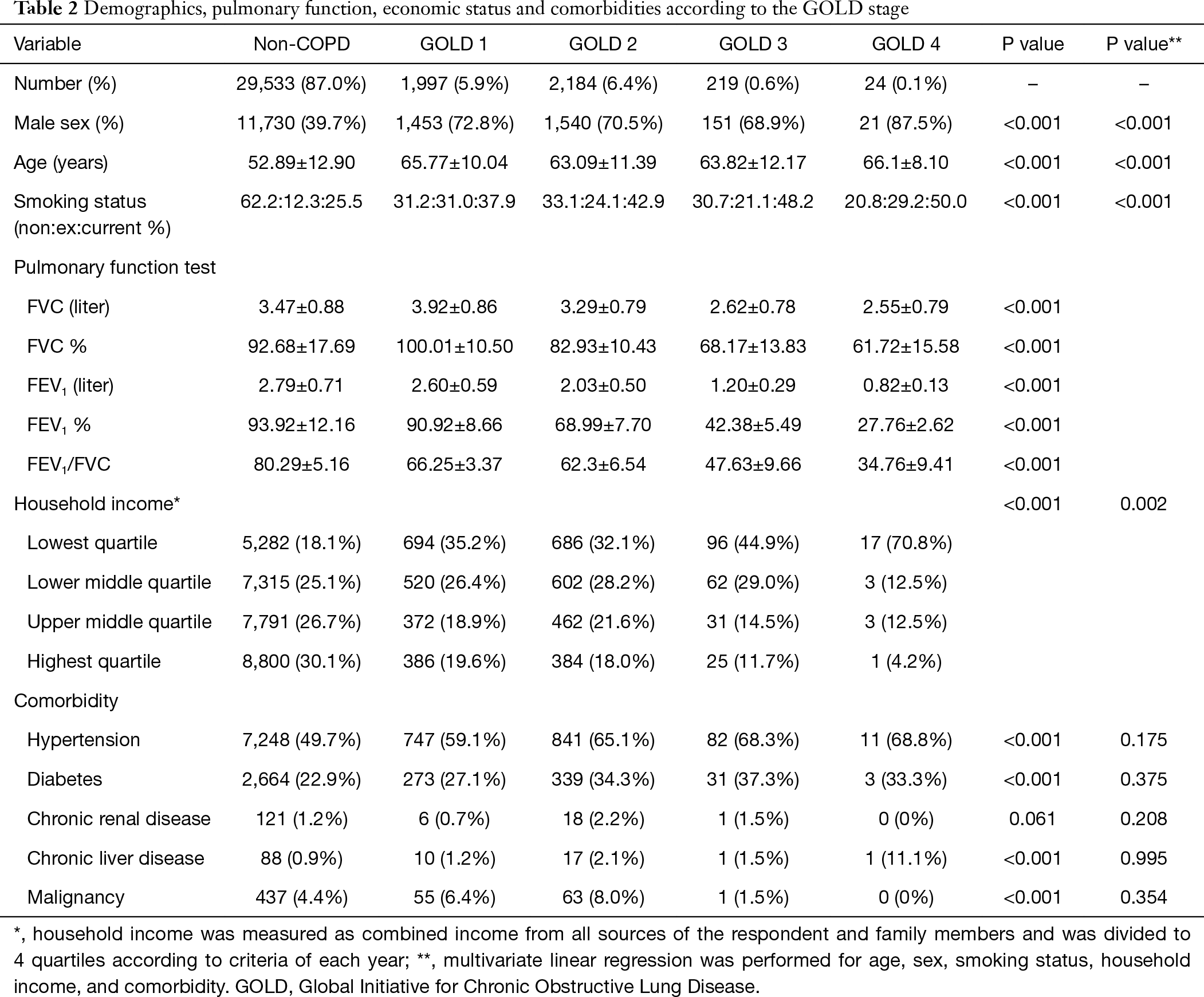 The rate, number, and causes of hospitalization

Hospitalization rate according to GOLD stage 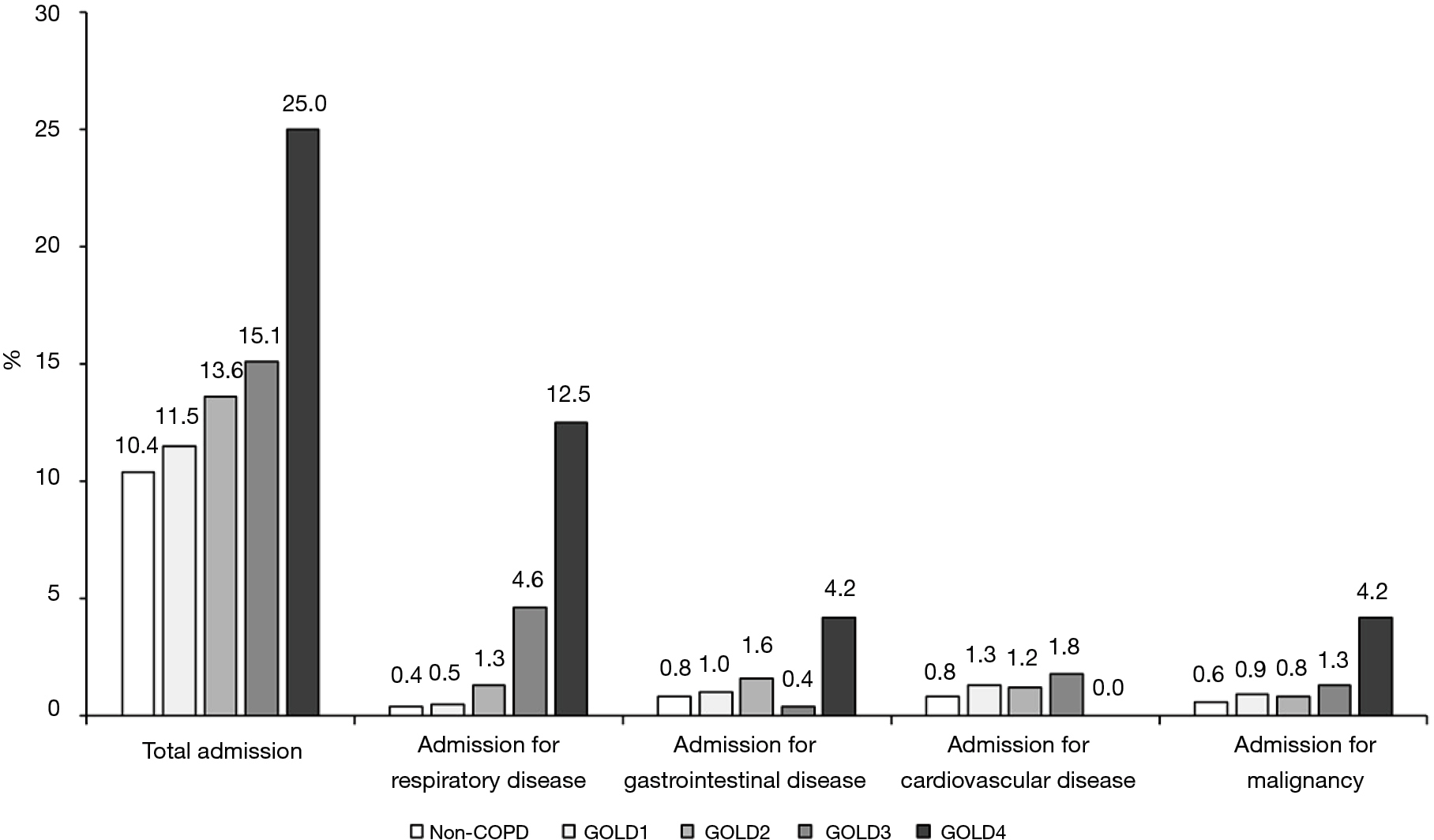 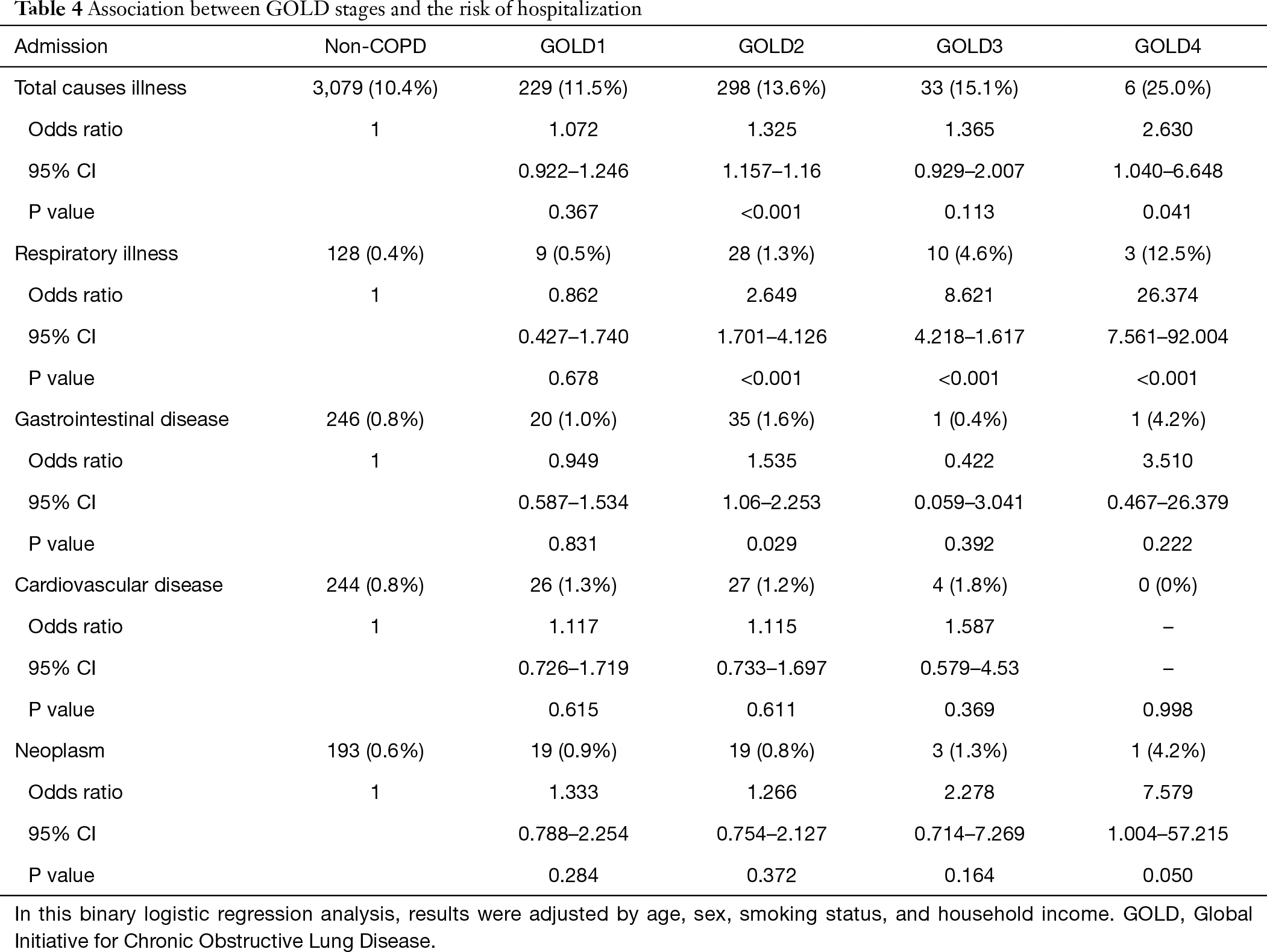 The present study evaluated the burden of hospitalization for the number, rate and economic aspect among KNHANES participants for 2007–2015, depending on the presence and severity of COPD. We showed that participants with COPD had a higher rate and frequency of hospitalization in the previous year than those without COPD. For causes of admission, patients with COPD had a higher rates and frequency of hospital admissions than those without COPD for respiratory illnesses, gastrointestinal diseases, and cardiovascular causes. Of note, the admission rate increased for total and respiratory causes as the stage of COPD advanced from GOLD 1 to 4, while the economic status deteriorated in the late stages of COPD.

As expected, patients with COPD had a higher number and rate of hospitalization in the previous year due to respiratory illnesses. In one large population-based study, COPD always occupied the first place in the frequency of hospital admissions for adult patients among four major respiratory diseases such as COPD, pneumonia, lung cancer, and asthma (12). It is well-known that patients with COPD often suffer from multiple comorbidities (13,14). In particular, COPD is associated with increased an risk of cardiovascular morbidities and approximately one-third of COPD deaths are estimated to be due to cardiovascular causes (15,16). Moreover, physical inactivity accompanying COPD frequently leads to functional constipation, and the use of inhaled long-acting muscarinic receptor antagonists may cause anti-cholinergic adverse events such as constipation in patients with COPD (17). Corticosteroid use is associated with an increased risk of duodenal ulcer perforation. Because inhaled and systemic corticosteroid are frequently used in the management of COPD, up to 30% of COPD patients have been found to have peptic ulcers, and COPD frequency in peptic ulcer disease is 2–3 times the general population (18). This finding is consistent with our results that participants with COPD had more major comorbidities such as hypertension, diabetes, liver cirrhosis, and malignancy than those without COPD (Table 1). Furthermore, our analysis showed that COPD patients were more frequently hospitalized than those without COPD not only due to respiratory causes but also for cardiovascular and gastrointestinal illnesses.

Previous reports have shown that the severity of COPD is associated with the frequency of hospitalization. Patients in the GOLD D category experienced nearly three times the number of exacerbations and COPD-related admissions as those in the GOLD A category (19). The present analysis showed that both acute exacerbation and respiratory illnesses generally increased hospitalization in COPD. Moreover, the total hospitalization rate increased as the stage progressed in COPD (Figure 2).

Patients with COPD suffer from the diseases and their associated financial burden. COPD is a disease of the poor. The Center for Disease Control and Prevention reported that 20.4% of those with COPD were unable to work compared to 4.8% without the disease (20). Americans older than 50 years who had COPD were less likely to be employed than those without COPD or those with cancer, heart disease, hypertension, or diabetes (21). Frequent hospitalization places a tremendous financial burden on individuals of low socioeconomic status. Unfortunately, that was what happened in the real world; the hospitalization rate increased as the COPD stage advanced (Table 3, Figure 2), while the lowest quartile of household income increased sharply in the late stages of COPD (Table 2). A striking observation was that the percentile of the lowest quartile of household income in GOLD 4 was >70%.

The present study has some limitations. First, the KNHANES dataset is a cross-sectional dataset. The positive associations between the number and rates of hospitalization for COPD do not imply causality. Second, although we were able to determine that low economic status was associated with the late stages of COPD, we were unable to determine the underlying causes. Third, the diagnosis of COPD was based on the pre-bronchodilator PFT findings instead of post-bronchodilator ones because it was only available in the KNHANES, which is a deviation from GOLD guideline of COPD diagnosis. Nevertheless, to the best of our knowledge, this is the first nation-wide analysis showing that hospitalization increased in the later stages of COPD not only for respiratory and cardiovascular diseases but also for gastrointestinal and all related causes. Moreover, we were able to determine the burden of hospitalization for the number, rate, and economic aspects according to the severity of COPD.

In conclusion, the hospitalization rate increased as the stage of COPD advanced, while the economic status of the patients deteriorated in GOLD stages 3 and 4. The burden of admission, including the rate, number, and costs increased in the late stages of COPD.

Funding: This study was supported by Pfizer Grant W1221325. Except the financial support, Pfizer did not involve any process of the present study including the design of the study to the writing of the manuscript.

Reporting Checklist: The authors have completed the STROBE reporting checklist. Available at http://dx.doi.org/10.21037/jtd-20-2683

Conflicts of Interest: All authors have completed the ICMJE uniform disclosure form (available at http://dx.doi.org/10.21037/jtd-20-2683). The authors have no conflicts of interest to declare.

Ethical Statement: The authors are accountable for all aspects of the work in ensuring that questions related to the accuracy or integrity of any part of the work are appropriately investigated and resolved. The study was conducted in accordance with the Declaration of Helsinki (as revised in 2013). All KNHANES survey protocols were approved by the KCDC institutional review board (2015-01-02-6C). Written informed consent was obtained from all the participants.