Lung cancer has been the most common cancer in China and globally for several decades (1,2). Approximately 75% to 80% of lung cancer patients have non-small cell lung cancer (NSCLC) (3). Pneumonectomy can significantly affect quality of life and long-term survival for several reasons. First, pneumonectomy carries the risk of complications, including decreased respiratory function, bronchopleural fistulas, progressive pulmonary hypertension, and elevated right-heart pressure, amongst others (4,5). Second, it has been reported that patients who receive right- or left-sided pneumonectomy may have different prognoses (6,7), and pneumonectomy of the right lung was associated with a higher incidence of mortality and morbidity than that of the left side (8), mainly because the right lung contributes more to overall lung function than the opposite side (9). Third, the anatomical structure, blood supply, and metastatic lymph node routes of the bilateral lungs are not totally identical. Therefore, right- and left-sided pneumonectomy may have distinctive long-term survival, but this problem has not been fully elucidated.

Although adjuvant chemotherapy has been the standard treatment for stage II-IIIA patients with surgery, few studies have examined patients undergoing pneumonectomy. Adjuvant radiotherapy was recommended for stage N2 NSCLC patients especially for those with multi-station mediastinal lymph node metastasis. But the long-term risks and benefits of adjuvant radiotherapy after pneumonectomy remain controversial. It is of great importance to determine the influence of adjuvant therapy on pneumonectomy patients. Therefore, the purpose of this study was to assess whether primary tumor sidedness could influence long-term survival in stage I–IIIA NSCLC patients who received pneumonectomy using a novel and validated PSM approach, and to further develop the best treatment strategies for these patients.

We present the following article in accordance with the STROBE reporting checklist (available at http://dx.doi.org/10.21037/jtd-21-264).

We accessed data from the Surveillance, Epidemiology, and End Results (SEER) database from the United States for the present study (10). Data codes were recorded by the North American Association of Central Cancer Registries (NAACCR) (11). The 3rd edition of the International Classification of Diseases for Oncology (ICD-O-3) was used to code primary tumor histology.

NSCLC patients aged 18 years or older from 2004 to 2014 were included in this study. Patients with unknown primary tumor location were excluded. All patients received pneumonectomy. The study was exempted from ethical review by the Beijing Cancer Hospital. We obtained the data agreement and data files were downloaded directly from the SEER website (12). A flow chart of patient selection in this study is shown in Figure S1.

Patients were categorized into left-sided and right-sided pneumonectomy. We used the chi-square test or Fisher’s exact test between groups to perform univariate analysis. A propensity score was constructed to reduce potential bias. A multivariate logistic regression model was constructed, including variables such as age, gender, race, year of diagnosis, tumor stage, T stage, N stage, original site, histology, number of lymph node dissections, radiotherapy, and chemotherapy. Matching (1:1) across the 2 groups was achieved with a 0.2-width caliper of the standard deviation of the logit of the propensity score. To evaluate the matching performance, baseline variables were compared using the McNemar’s test between the matched groups, and a difference between −0.1 and 0.1 is generally considered negligible for the calculation of standardized differences. 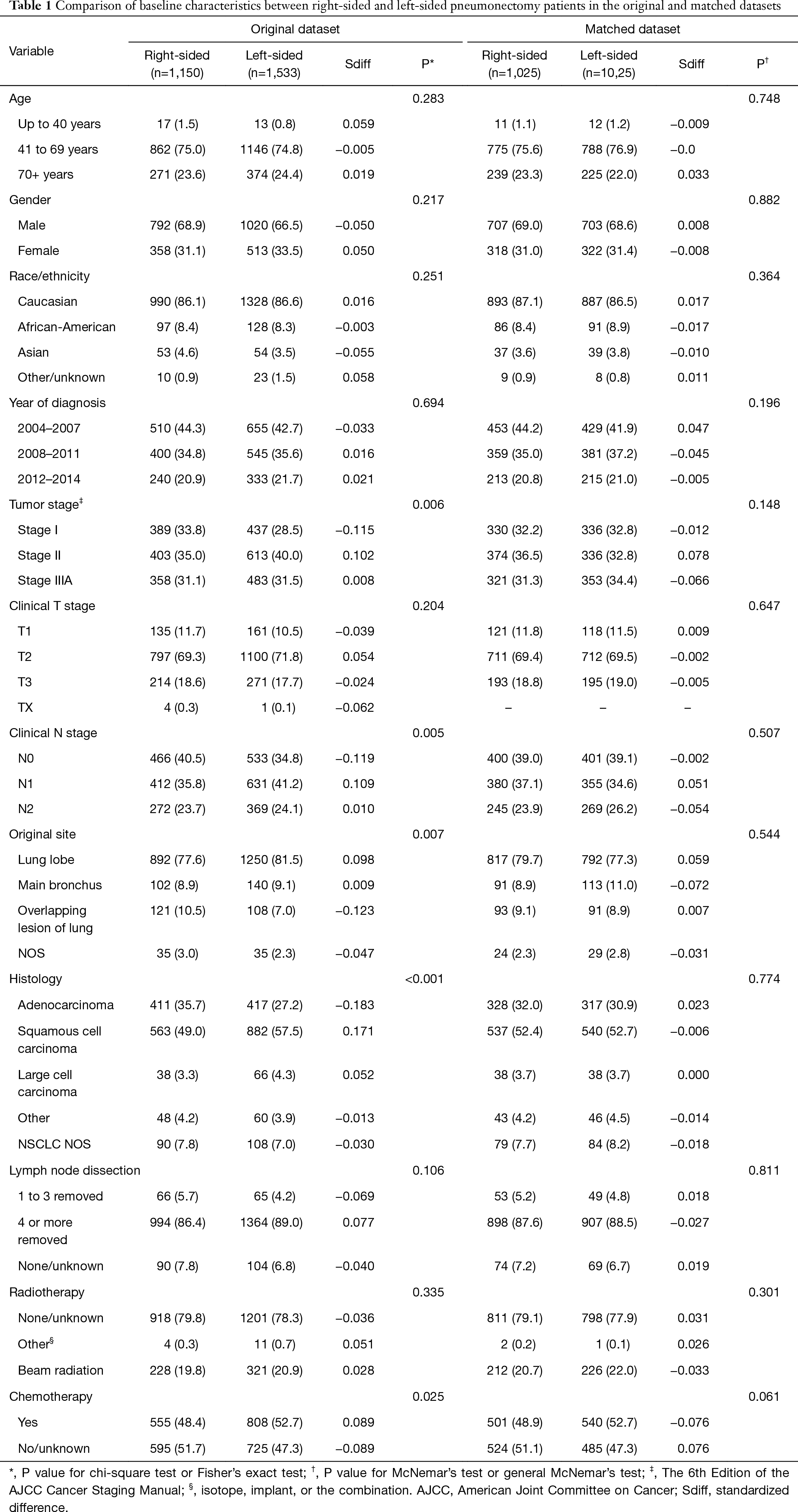 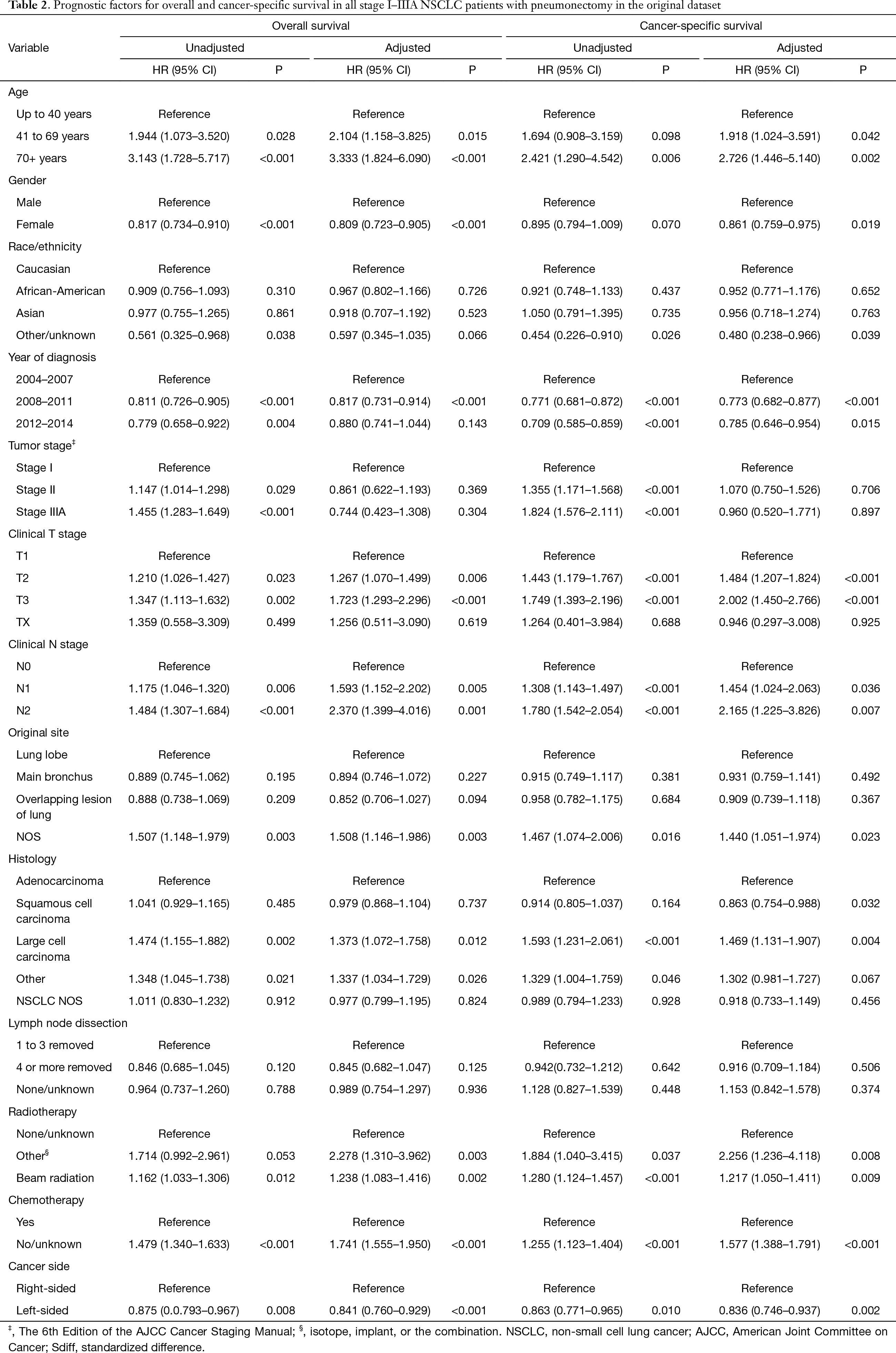 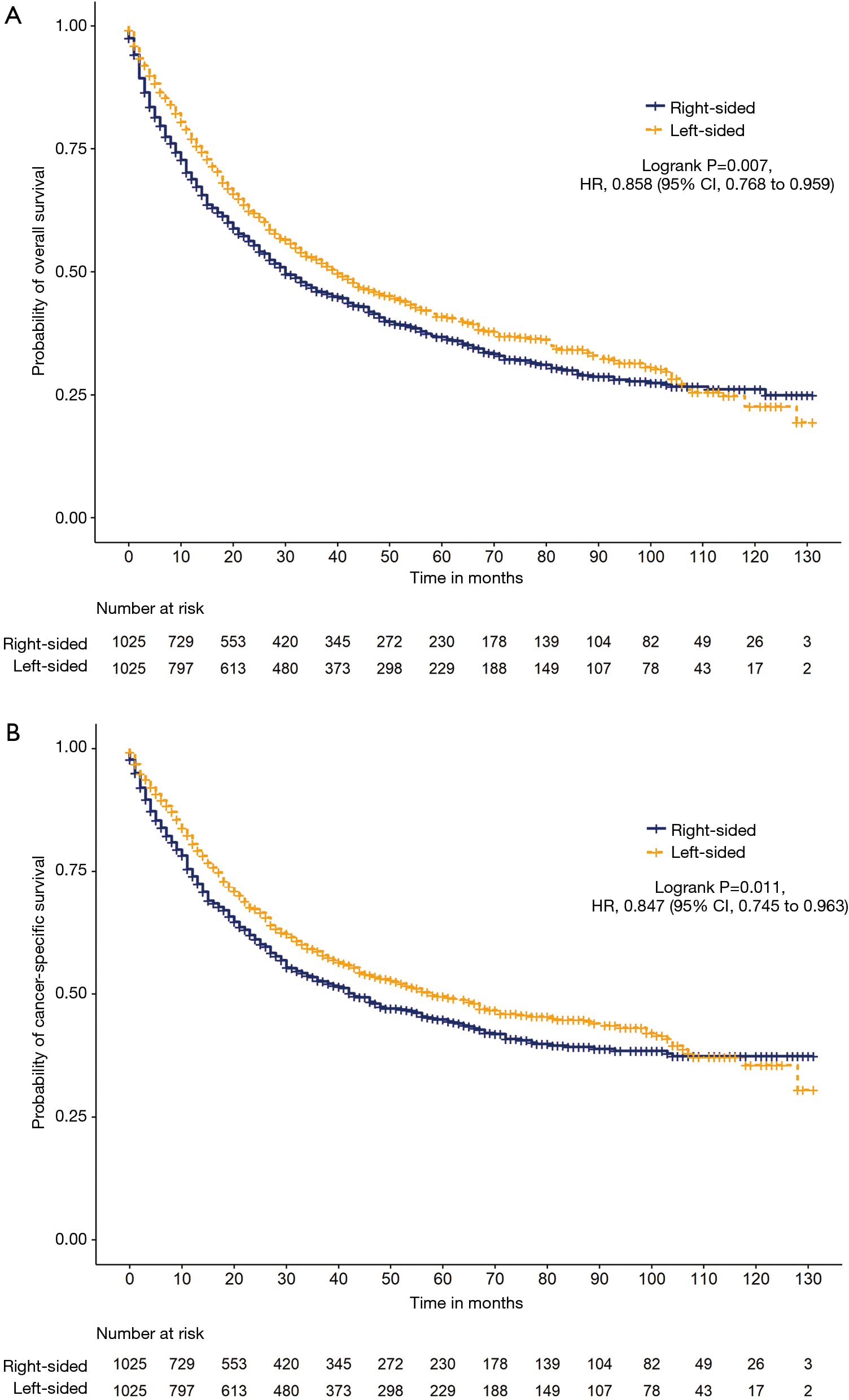 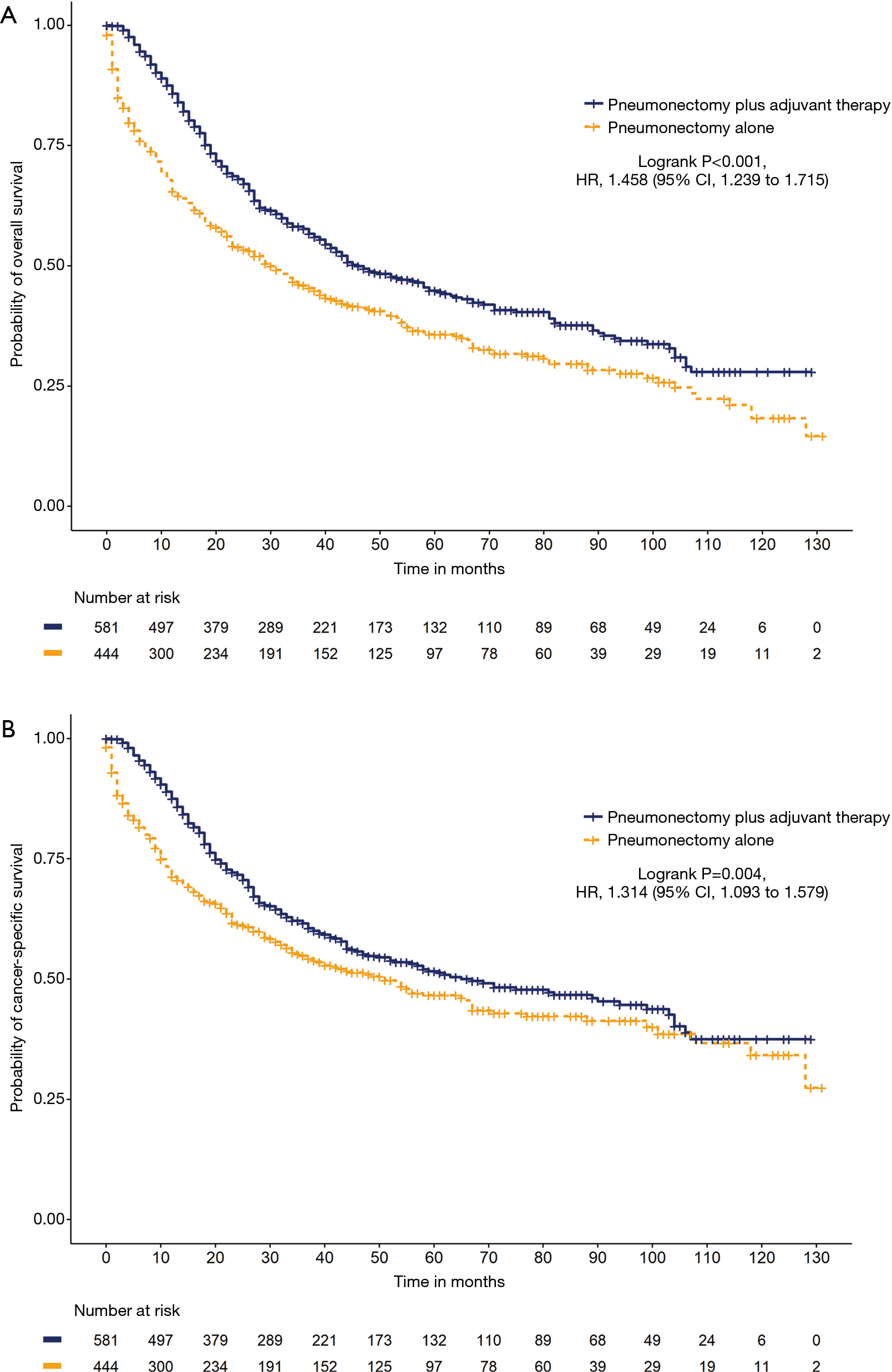 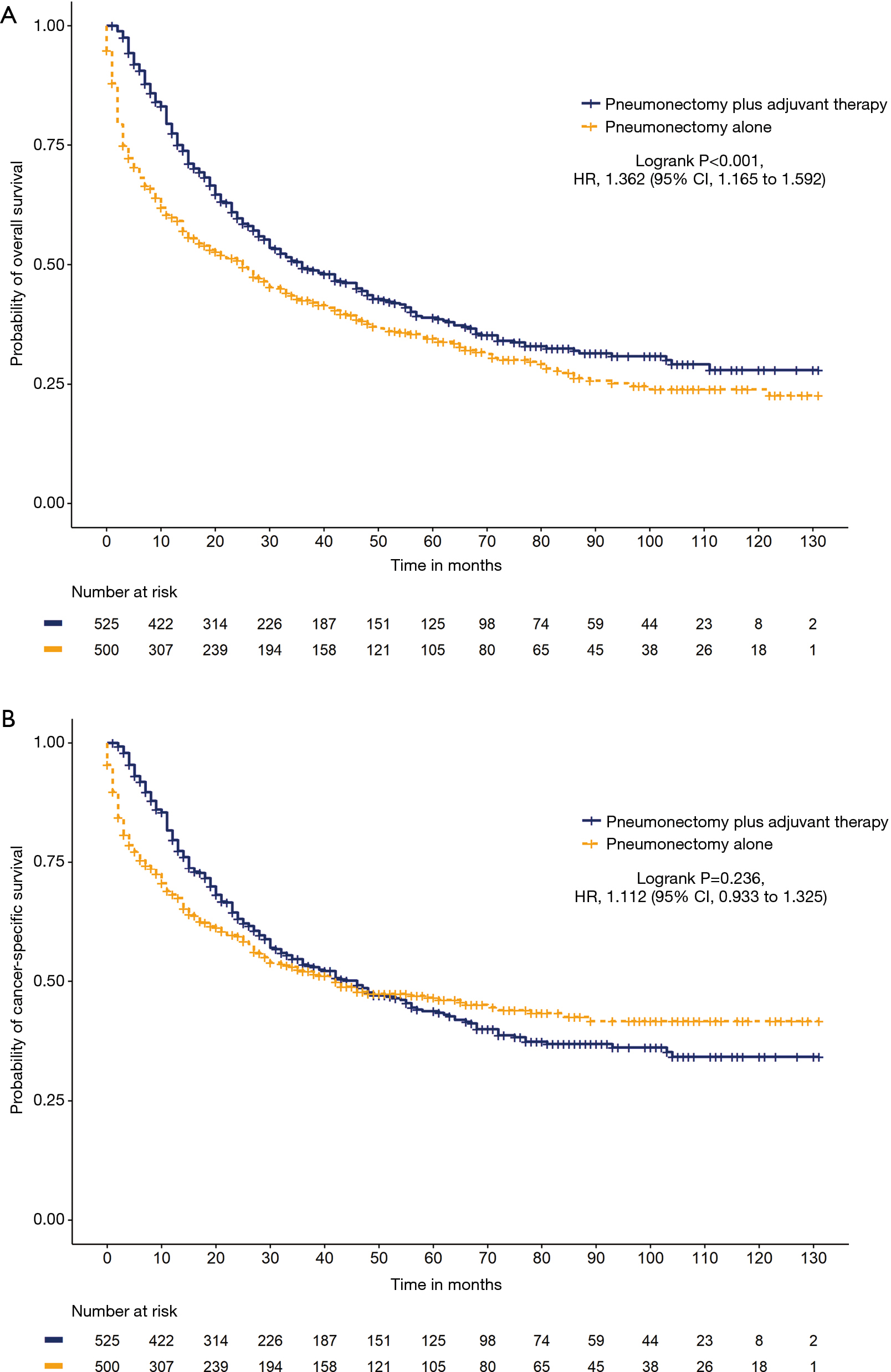 OS was favorable for left-sided pneumonectomy across clinical subgroups, including stage II or IIIA, squamous cell carcinoma, and those who received chemoradiotherapy or radiotherapy (Figure 4). 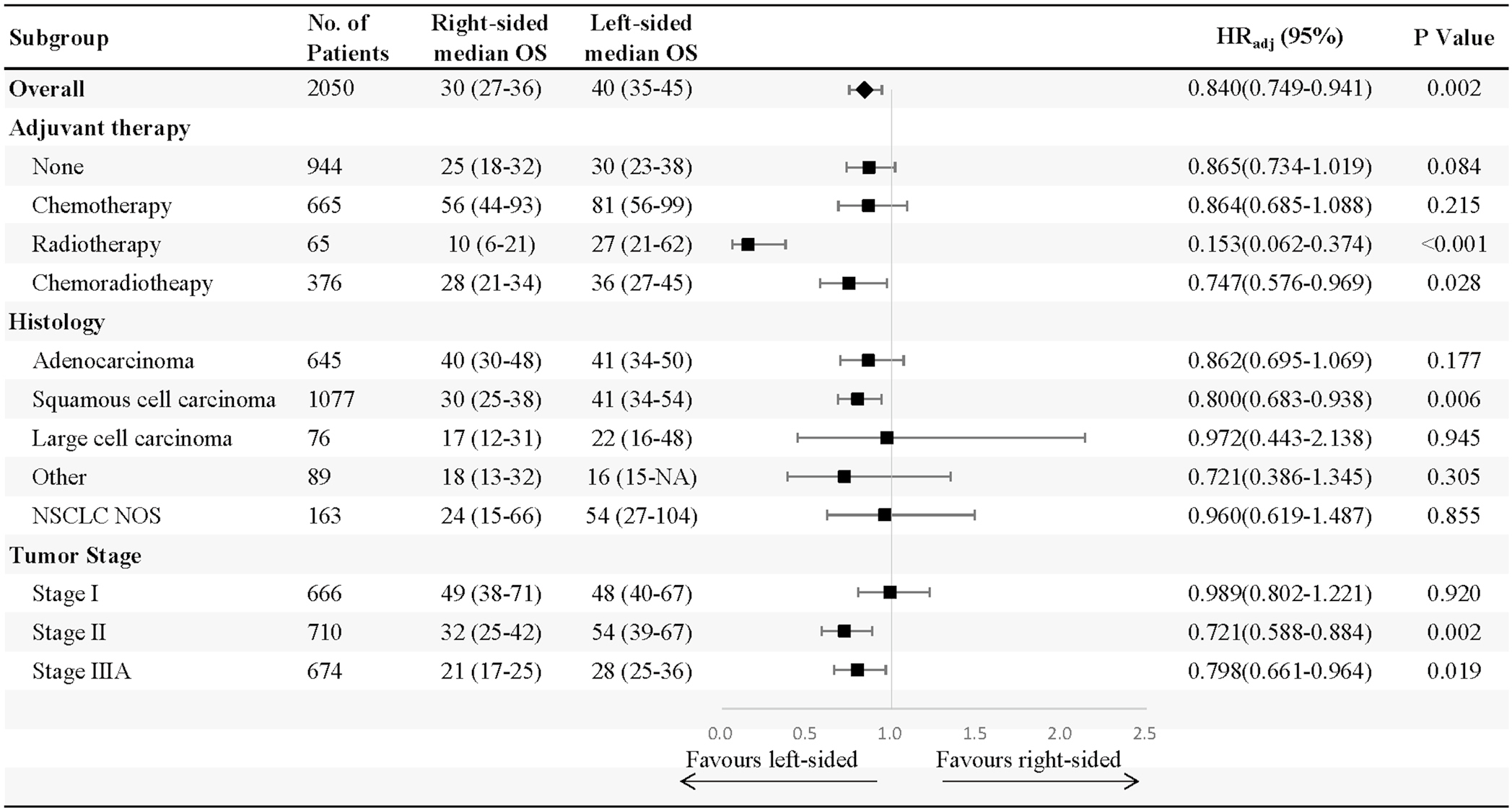 To our knowledge, this is the largest and the first population-based study using a novel propensity score matching analysis to assess the influence of pneumonectomy side on the survival outcomes of NSCLC patients. This study indicated that pneumonectomy side may be an important factor when physicians determine the most optimal treatment strategies.

There were some limitations in this study. First, we used the 6th edition of the American Joint Committee on Cancer staging manual rather than the 7th edition. This is because we selected patients in the SEER database from 2004 to 2014 and all patients had staging records based on the 6th edition in the database. If we chose the 7th version, there would be many missing values. Furthermore, there were no significant differences between the 6th and 7th edition stages, which did not have a considerable effect on the study results. Second, some variables, such as surgical quality or R0 margin, were not actually available in the SEER database, and we were unable to analyze these data (19). Therefore a large sample study with more information should be conducted to further verify our conclusion. Third, Uniportal video-assisted thoracic surgery (UniVATS) technique was a new surgical method with less invasion. The efficacy of UniVATS pneumonectomy for NSCLC patients needed further study. But this information was not recorded in database.

We acknowledge the SEER*Stat team for providing patient information. This manuscript has been released as a pre-print at [Research Square], [].

Reporting Checklist: The authors have completed the STROBE reporting checklist. Available at http://dx.doi.org/10.21037/jtd-21-264

Conflicts of Interest: All authors have completed the ICMJE uniform disclosure form (available at http://dx.doi.org/10.21037/jtd-21-264). The authors have no conflicts of interest to declare.