Coronary artery disease (CAD) is still the leading cause of mortality in developed countries (1). The gender differences in development of atherosclerosis and prevalence followed by worse clinical outcomes were reported (1-7). The first major adverse cardiovascular event (MACE) is diagnosed almost 10 years earlier in males than in females (2,3). The mortality risk from CADs is higher in females comparing with men despite similar atherosclerotic plaque morphology. Women are characterized by worse revascularization outcomes and higher all-cause mortality than men which may be related to smaller coronary arteries diameters (4-6). Previous studies included non-direct evaluations with the use of computed tomography or coronary angiography. We performed late all-cause survival analysis in relation to gender differences and aimed to find an objective direct method of coronary artery diameter assessment. We present the following article in accordance with the STROBE reporting checklist (available at http://dx.doi.org/10.21037/jtd-20-3356).

The left mammary artery and parts of saphenous vein for venous grafts were harvested. Intravenous heparin was used to achieve therapeutic activated clotting time (ACT) with a mean value ± SD of 420±40 s. We used Octopus III (Medtronic, USA) stabilizer and deep pericardial stich. The anastomoses were performed after local stabilization and artery longitudinal incision was followed by intraluminal shunt application. After coronary artery incision, shunts were applied into the lumen of the artery according to their sizes. The shunts were adequate to allow blood flow but to limit bleeding. All anastomoses were performed with running 7-0 monofilament suture.

Patients were provided with written informed consent for surgery but the ethics committee for neither surgical technique nor for shunts application was not required as this type of surgery is common surgical practice. This study is retrospective evaluation of data obtained during standard clinical practice related to operative hospitalizations and outpatient clinics.

The study was conducted in accordance with the Declaration of Helsinki (as revised in 2013). The study was approved by institutional ethics committee of Poznan University of Medical Sciences in Poland with No. 55/20 and informed consent was taken from all the patients.

The patients were first involved in the research by verifying their survival and participation was voluntary by informing the subject of the study. Survival was additionally assessed by national electronic verification data available for our country.

Continuous variables were reported as mean ± SD. Categorical variables were reported as frequencies and percentages. Shunts diameters in analyzed groups did not follow the normal distribution, and the differences were evaluated by the Mann-Whitney U test. The frequencies were compared by test for proportions. Relationship between analyzed parameters was assessed by Spearman’s rank correlation coefficient. The Kaplan-Meier estimate was used in order to assess the survival proportions of analyzed subgroups. The significance of survival curves was checked by log-rank test. The Cox’s proportional hazards model was performed to analyze potential risk predictors for late overall mortality. The analysis was performed both as univariate and multivariate, which adjust the estimated coefficients to the coexistence of other predictors. The multivariate analysis was performed with stepwise, backward selection procedure. The obtained results were presented as hazard ratios (HRs) and its 95% confidence intervals (CIs). All tests were considered significant at P<0.05. The analysis was performed by StataCorp. 2019. Stata Statistical Software: Release 16. College Station, TX: StataCorp LLC. All patients included into the study fulfilled the criteria of obtained data. 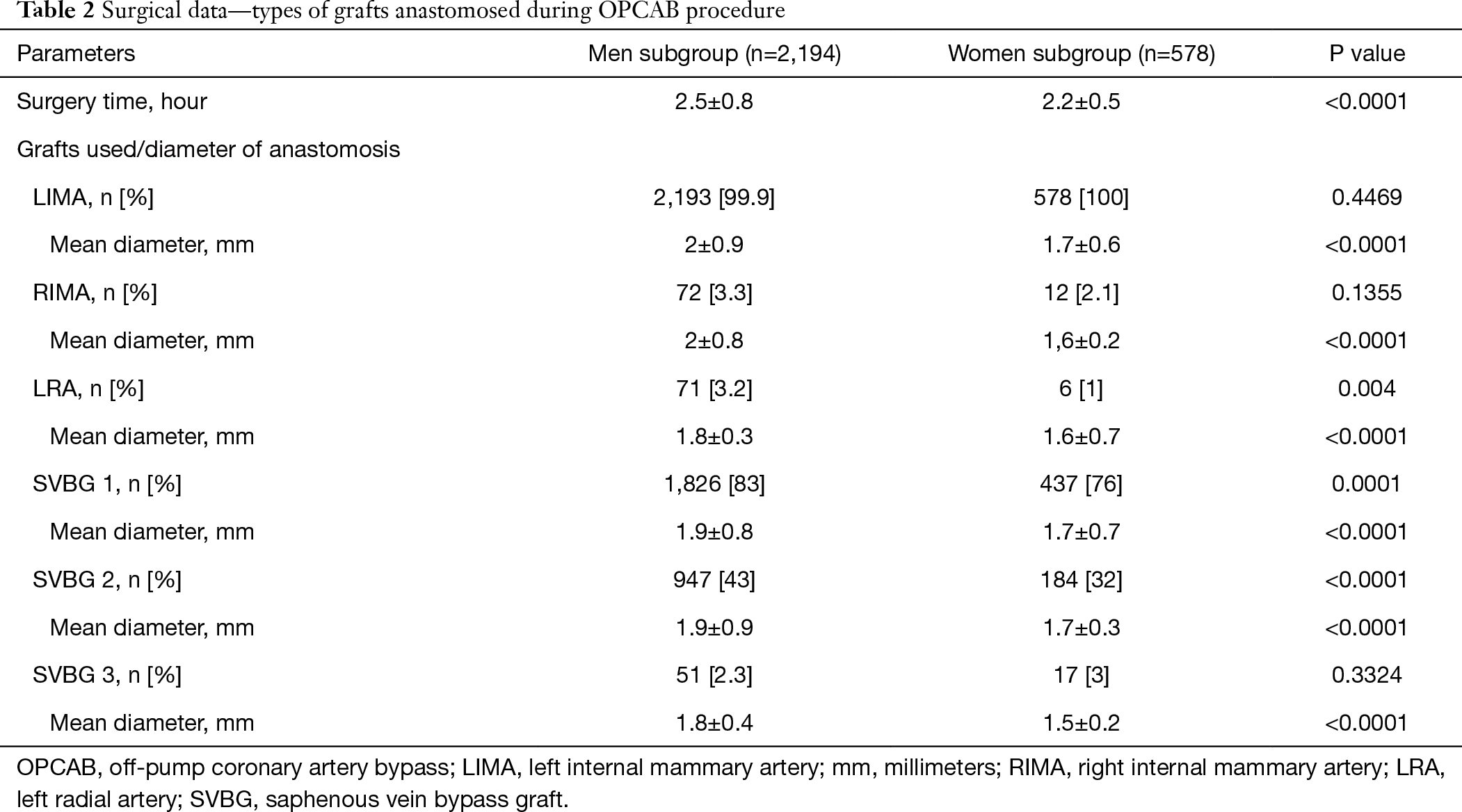 We analyzed the relationship between the mean shunts diameters applied into all three arteries with the BSA. The Spearman’s rank correlation between BSA area and mean shunts applied during anastomosis of LAD (r=0.18; P<0.0001), Cx (r=0.11; P<0.0001) and RCA (r=0.12, P<0.0001) shows a positive, low correlation. The Kaplan-Meier analysis shows a significant difference in survival proportions between males and females (P<0.0001). The 5-year survival rate was 86% vs. 94% and follow-up survival rate was 73% vs. 94% for males and females respectively, Figure 1. 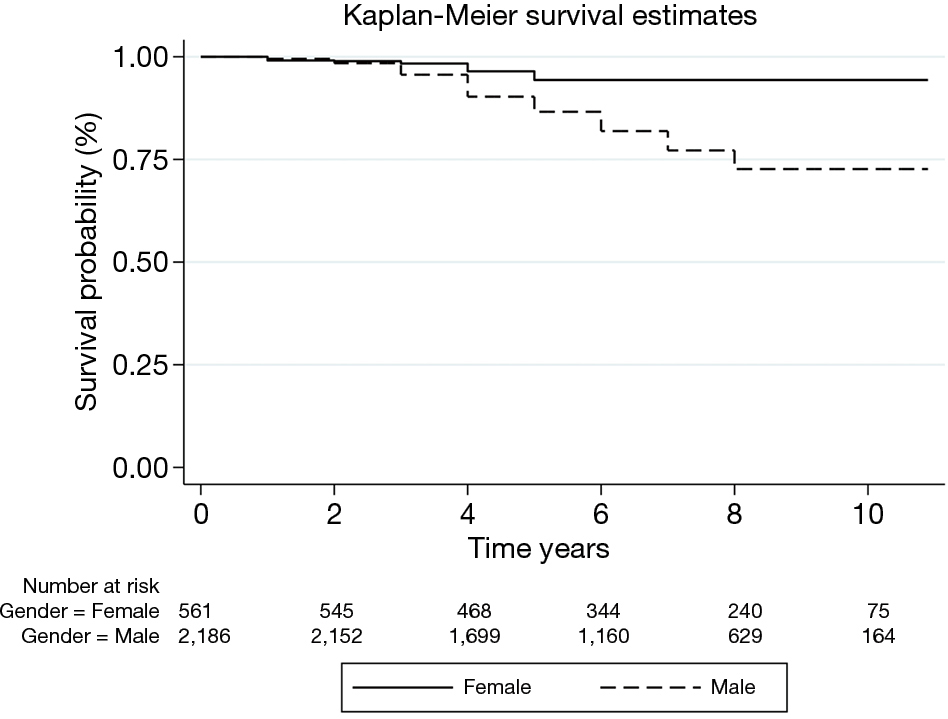 We used Cox’s proportional hazards model to determine if gender, BSA, coronary arteries diameters and number of applied grafts, were the risk predictors of all-cause mortality. The analysis was performed for whole group of patients and separately for females and male subgroups. The univariate model applied to all patients shows that male sex [HR =4.27; 95% CI: (2.88–6.30)] is significant risk factor for all-cause mortality. On the contrary, the completeness of revascularization (presented by number of applied grafts) reduces the risk of all-cause mortality [HR =0.84; 95% CI: (0.74–0.93)]. The same predictors remain statistically significant in multivariate model, Table 3. The sub analysis for males shows similar results. The elevated BSA as well as completeness of revascularization reduces the risk of all-cause mortality in males, Table 3. 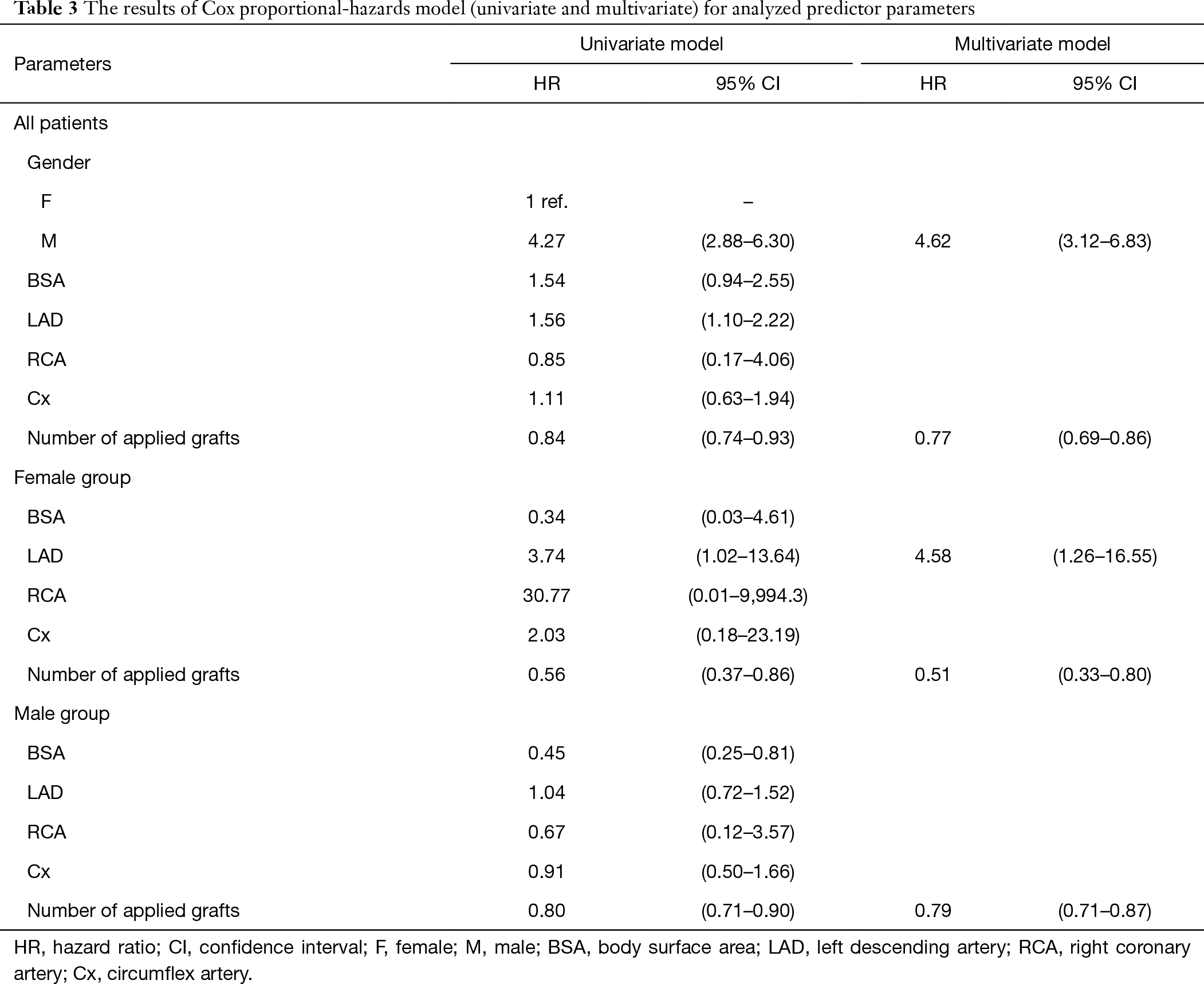 According to the results of our study, females have smaller coronary artery dimensions evaluated by surgical shunts diameters during performing the anastomosis. The smaller BSA, which is characteristic for women, is also the significant risk factor for smaller diameters of coronary arteries. Despite lower diameters of coronary arteries, the Cox’s proportional hazards model finds male sex as significant risk factor for all-cause late mortality following OPCAB grafting. Furthermore, in males, paradoxical, the overweight or obesity reduces the risk of late mortality.

Previous reports involved non-invasive estimation of coronary artery diameters based on computed tomography scans or intravascular ultrasounds results (8,9). The former publications were based on computer calculations, the latter are related to proximal segment measurements (10,11). Our study proves also that BSA is the significant indicator of coronary artery lumen differences. Our suggestion of intraoperative analysis is helpful in practical daily use, does not require additional, detrimental and exams. Lower diameter of coronary arteries in women may explain the observation that mortality rate is higher in ischemic heart disease in women than in men (12). In contrary, all-cause late mortality, according to our results, is lower in women group and confirm the benefit of surgical revascularization. The lower late overall survival in female sex was postulated after percutaneous interventions, though main reasons are non-cardiac (13).

Female gender is an independent risk factor for increased mortality after surgical revascularization. Worse outcome of invasive treatment in CAD in women was proved in several studies (7-16) and therefore female gender was included in predictive preoperative scores, including EuroScore calculator and STS score. Perioperative mortality in our study described by EuroScore II were insignificant between both groups with mean values of 1.16±0.2 and 1.21±0.3 (P=0.0327). Results presented in our study confirm the male sex as significant factor for lower all-cause late mortality.

Increased morbidity in females associated with surgical revascularization is attributed to several factors, including their smaller coronary artery diameters (6). The late worse results of surgical and percutaneous revascularization in women despite medical advances remain a challenging problem that may be related to differences in coronary arteries diameters. The higher rate of bleeding events, thromboembolic events, procedural complications and lower graft patency were reported (9). The differences in long term results depending on types of grafts utility (arterial vs. venous) have a significant impact on clinical outcomes in women (17). Moreover, women benefit more from the OPCAB technique than from on-pump technique in terms of mid-term mortality, while this difference is not visible in men (18). The difference may result from the bleeding risk, re-exploration needs and red blood transfusions (12).

It is a single-center study with retrospective analysis based on intraoperative and all-cause mortality data. During surgery none of the patients suffered from active form of neoplasm, but neither previous nor postsurgical history of any oncological disease was taken into consideration estimating all-cause long-term mortality. The study did not refer to the results of surgical technique and did not compare them as the follow up data were not presented. The aim of the study was to compare the overall survival and diameters of the tool used during surgery. The diameters of coronary arteries were assessed on accuracy of the shunt sizes applied during surgery. The diameter of the shunt was adjusted by surgeon to achieve bloodless field.

Female sex is associated with better late survival following surgical revascularization despite smaller diameters of coronary arteries in direct measurement with the use of intraluminal shunt application.

Reporting Checklist: The authors have completed the STROBE reporting checklist. Available at http://dx.doi.org/10.21037/jtd-20-3356

Conflicts of Interest: All authors have completed the ICMJE uniform disclosure form (available at http://dx.doi.org/10.21037/jtd-20-3356). The authors have no conflicts of interest to declare.

Ethical Statement: The authors are accountable for all aspects of the work in ensuring that questions related to the accuracy or integrity of any part of the work are appropriately investigated and resolved. The study was conducted in accordance with the Declaration of Helsinki (as revised in 2013). The study was approved by institutional ethics committee of Poznan University of Medical Sciences in Poland with No. 55/20 and informed consent was taken from all the patients.