Surgical stabilization after complex chest wall traumas, especially in case of flail chest and critical respiratory conditions, still remains a challenge for thoracic and trauma surgeons (1-7). An early definitive ribs stabilization is mandatory to significantly reduce early and late respiratory complications (4-6). The timing when to perform a surgical stabilization is not precisely defined, however, it should be performed within the first 72 hours of injury shortening the intensive care unit (ICU) stay, the number of ventilator days and the days under continuous intravenous narcotic medicaments (2,7-12). Throughout the years different techniques and materials for surgical fixation have appeared such us metal and absorbable bioprosthetic materials. Absorbable materials seem to have mechanical and clinical advantages compared to metal (easier to customize, no need to remove the prosthesis, stimulation of new bone formation). However, up to now, titanium bars still remain the most commonly used prosthesis (2,4,8,13-15). Our aim is to present, in accordance with the STROBE reporting checklist, a prosthetic-free ribs stabilization technique which doesn’t require prosthetic material, is easily reproducible and can achieve an efficient mechanical stabilization also in the case of a complex chest wall destruction with associated flail chest.

We present the following article in accordance with the STROBE reporting checklist (available at http://dx.doi.org/10.21037/jtd-21-111).

Patients who met at least two or more of the following criteria on the time of the admission were eligible for the surgical treatment and ribs stabilization:

Hemodynamically and respiratory stable patients underwent a preoperative CT scan with 3-dimensional reconstruction to exactly localize the fractures and to plan the optimal surgical approach and type of reconstruction. Operative treatment of thoracic injury was performed in all patients within 72 hours of trauma.

Analyzed variables in all patients were:

The study was conducted in accordance with the Declaration of Helsinki (as revised in 2013). The study was approved by regional ethics board of Vorarlberg and individual consent for this retrospective analysis was waived.

This is a retrospective study with one single group and no statistical analysis was conducted. 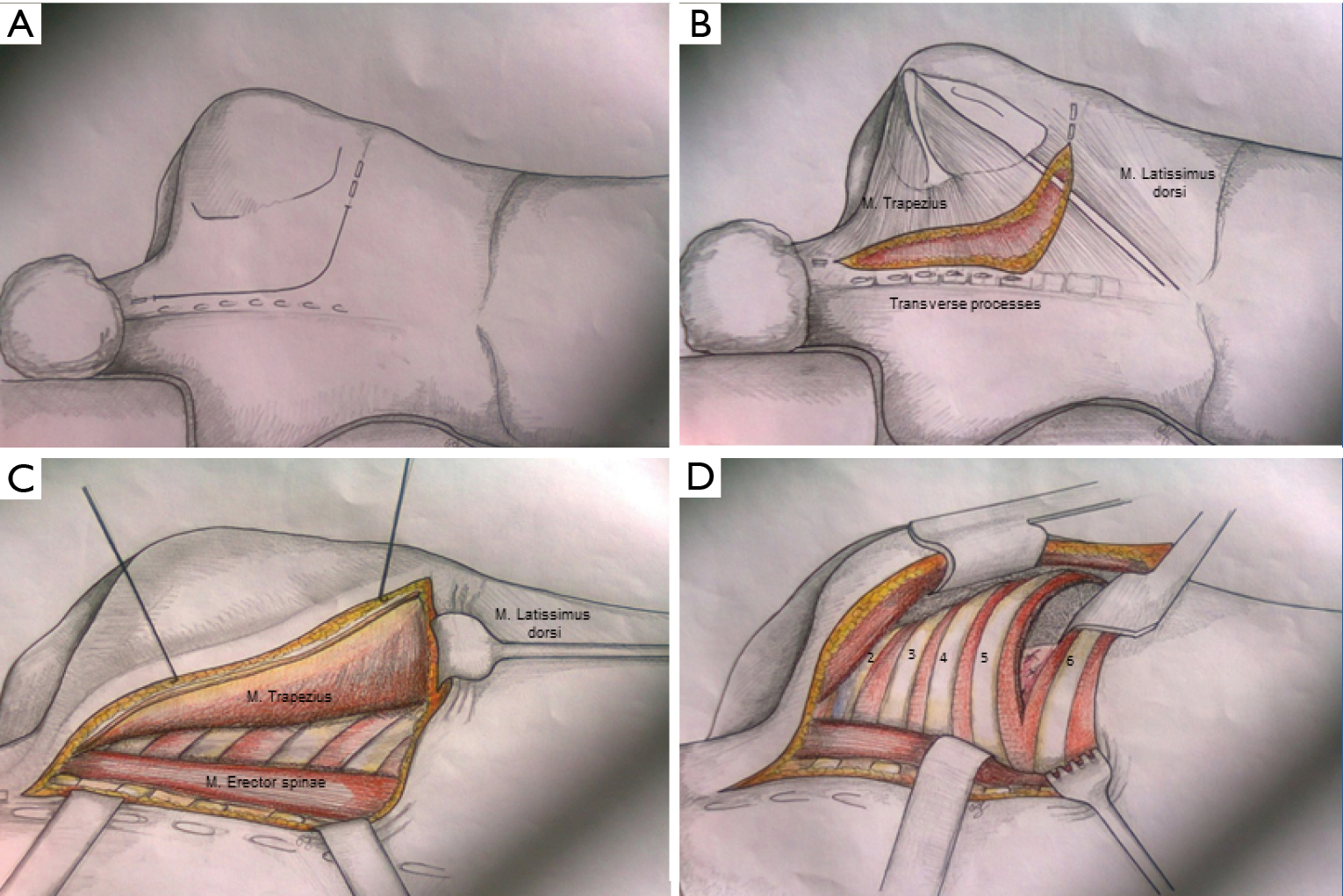 We stabilize the ribs following the cranial-caudal and posterior-anterior direction. Fractures are fixed due to single sutures with absorbable thread Maxon™ 1 BGS-25 Covidien following our technique as showed in Figure 2. We fix from the second to the eighth ribs. At the end of the fixation, two 28-French pleural drains are placed, one of which is placed in the costophrenic angle. 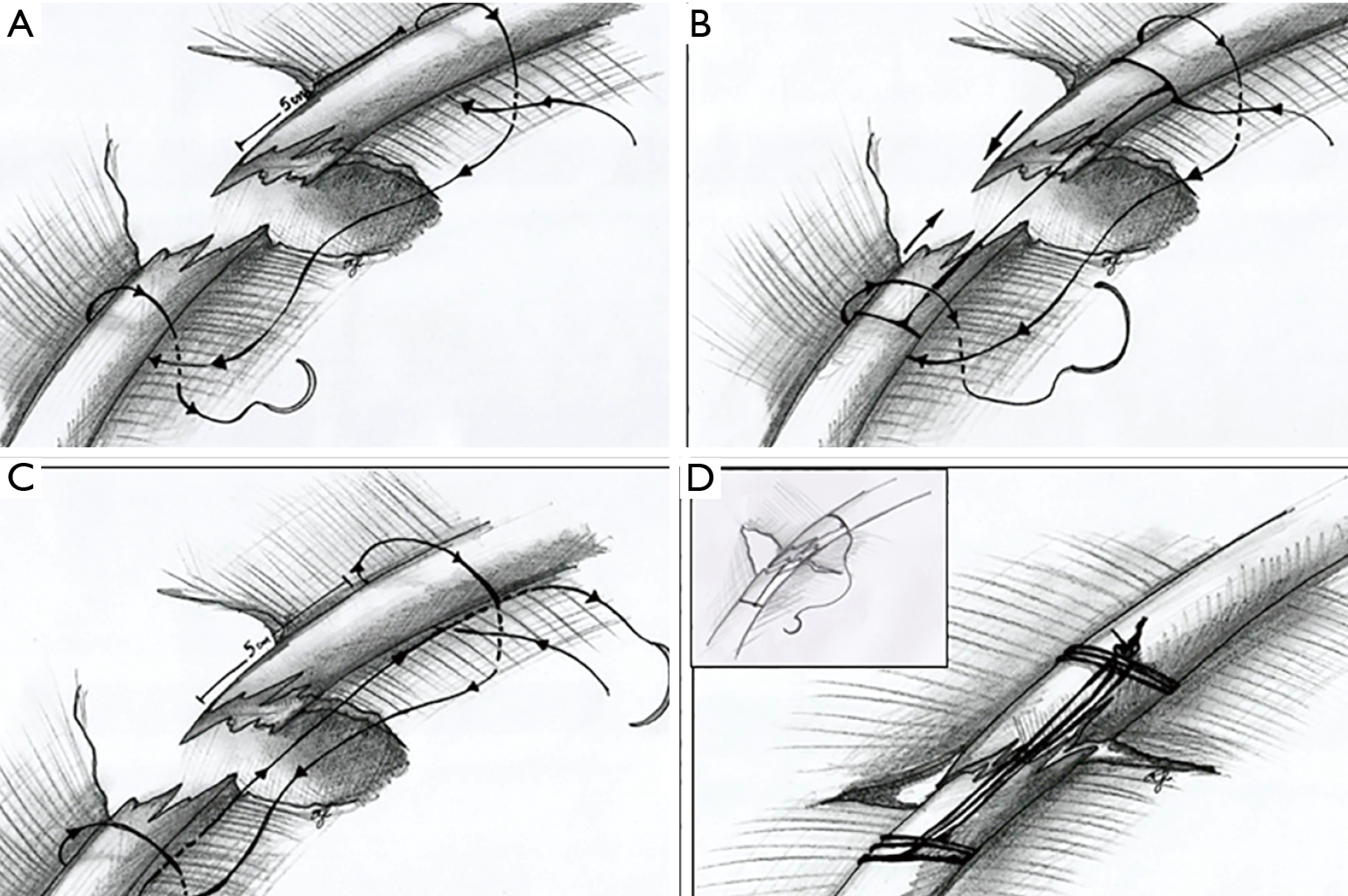 The technique of rib fixation follows a standardized technique:

The first step consists of overbridging the rib fracture with two loops surrounding the rib on both sides, 5 cm far from the fractures ends (Figure 2A). Secondly, the thread passes through the loops as a U-suture to the origin of the suture. (Figure 2B). This stitch is done at least three times before pulling the knot, always maintaining the tension of the thread during the suture (Figure 2C). Following this technique the fracture is approximated and the two edges of the ribs fit together (Figure 2D).

Subsequently, if a heightened chest wall stability is required after a complete destruction of the first 5 ribs, we fix the scapula by a single stitch with Prolene 0 V-34 (Ethicon) on the posterior arch of the sixth rib (Figure 2D).

We retrospectively evaluated ten consecutive patients (6 male/4 female) which underwent a chest wall stabilization because of a complex thorax trauma with associated flail chest from 01 January 2018 to 01 June 2020. Preoperative data are shown in Table 1. Median age was 52 years (range: 45–65 years). Most of traumas were vehicle traumas (six patients), 4 patients had sport accidents. Seven patients were intubated on admission, and nine patients had a clinical evident flail chest on first clinical evaluation. Nine patients had more than one associated abdominal or osseous trauma: one patient had a liver and one a spleen injury. These two patients required also an emergency laparotomy: the first patients underwent a left lateral liver resection and the second a splenectomy. 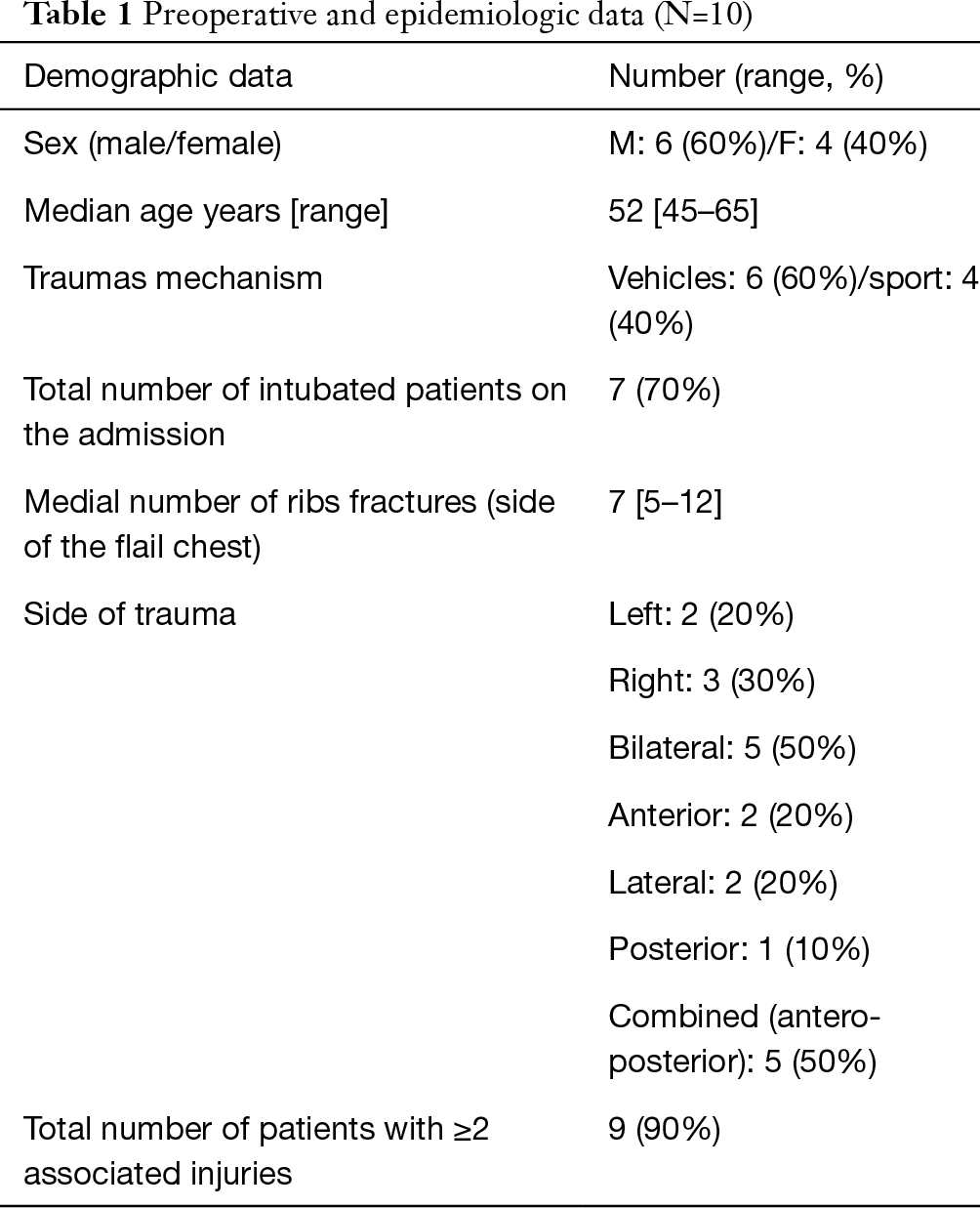 All patients required a single unilateral chest wall stabilization. Figures 3,4 show preoperative and postoperative CT-scan and 3D reconstruction of one patient after vehicle trauma who had right lung hemothorax associated with bilateral multiple ribs fractures and right flail chest. After 24 hours of his admission, the patient underwent a right side thoracotomy: ribs from second to eighth were fixed and an upper-lobe wedge resection was performed due to a parenchymal laceration. 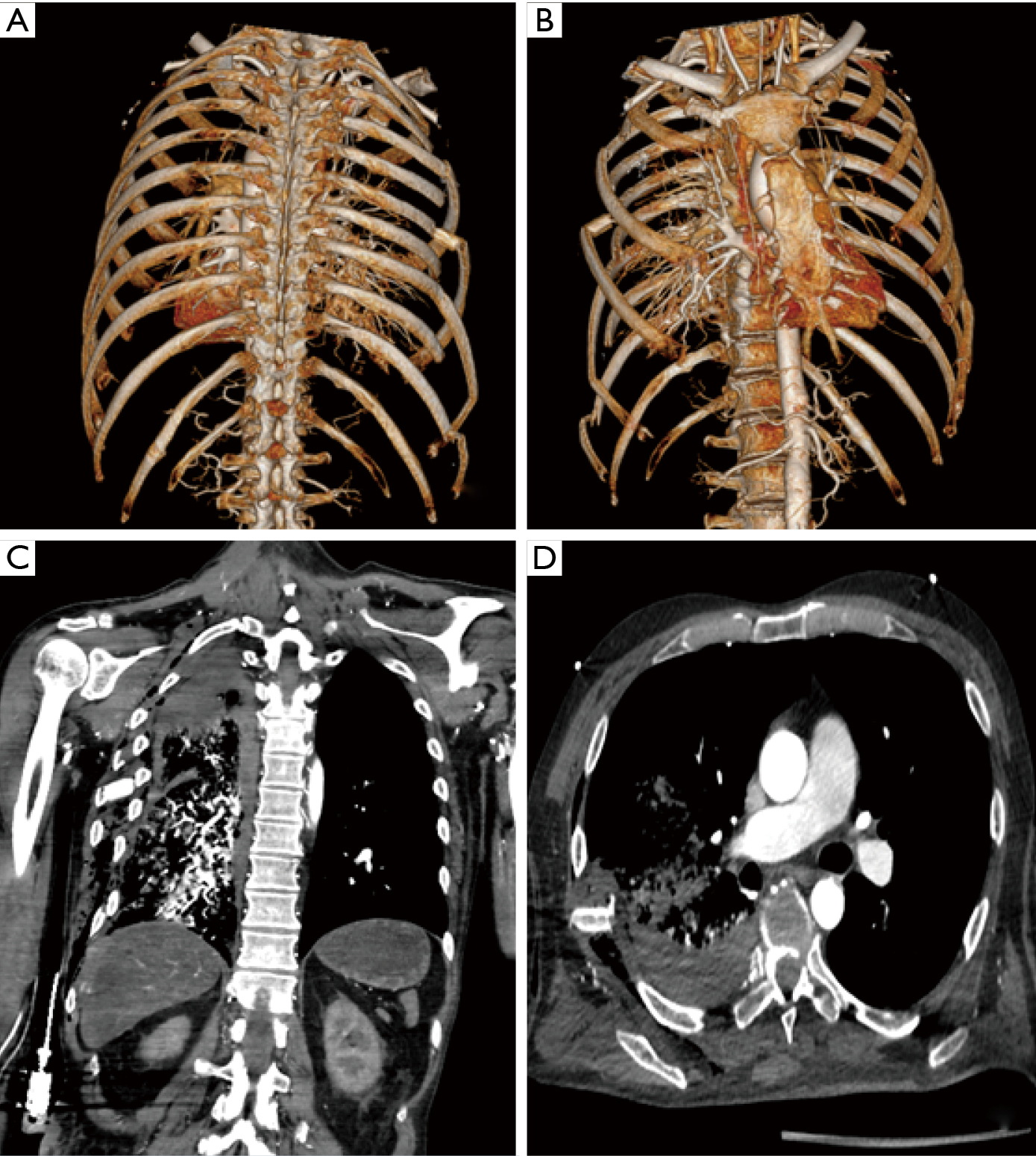 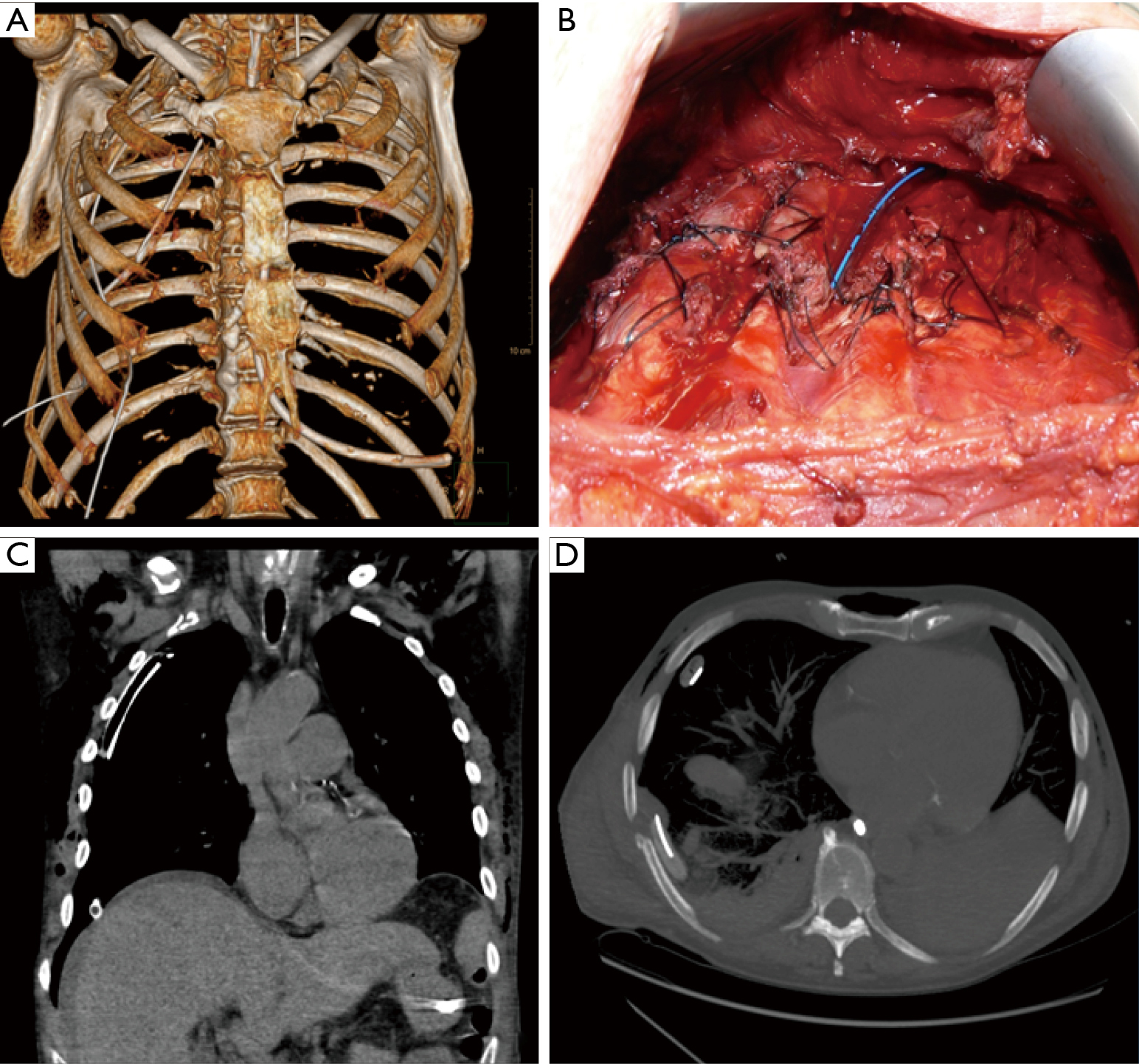 Figure 4 (A) 3D-Reconstruction CT-scan after stabilization (from second to eighth ribs were fixed). (B) Intraoperative picture after stabilization. CT-scan showing the results of the surgical procedure and the restoration of the anatomical ribs curvature: (C) coronal view and (D) transverse view.

Three patients underwent an associated lung resection (non-anatomic resection in two patients and a right upper lobectomy in one patient). In over 90% of cases, ribs fractures occurred between the second and the sixth. The median number of stabilized ribs was 5.5 (range, 4–7). We observed following postoperative minor complications: two patients developed at fifth and sixth postoperative days pneumonias that required antibiotic therapy. Regarding minor complications (Dindo-Clavien ≥ III): one patient developed an intrathoracic hematoma on the second postoperative day. Hematoma was removed by a video-thoracoscopic approach. In another patient a cholecystectomy was required due to an acute cholecystitis which occurred on the fifth postoperative day. No chest wall deformities during a CT-scan follow-up after seven, thirty and ninety days were observed and no patients underwent additional early or late stabilization procedures. Median lost lungs volume Δ was 5% on the follow-up CT-scan on seventh day (patient with lobectomy excluded). Only one patient developed pain with a nonunion ribs fracture after 3 months, confirmed in CT scan. Six months after the nonunion region was resected without reconstruction.

There is no data in literature which technique of rib stabilization in complex chest traumas should be used (2,6) and in many cases the choice of the technique depends on surgeons’ skills and preference.

Operative treatment should be considered in two cases of severe chest wall traumas: flail chest or non-flail chest but with more than 3 severely (bicortical) displaced ribs fractures (2,6,7,11,12,16). Many authors report that patients undergoing ribs stabilization for flail chest have decreased pain, shortened duration of mechanical ventilation, decreased incidence of pneumonia, decreased likelihood of tracheostomy and decreased length of stay in ICU and hospital (2,7,9-12). Furthermore a surgical intervention can be planned if the patient is undergoing a thoracotomy for other indications (2,7,8). As mentioned above there is no consensus about the perfect timing for surgery. However, an early approach, specifically within the first 72 hours, may result in a better outcome and less early and late complications. The ongoing inflammatory process or an initiated callus formation may render the normal alignment of the ribs more difficult causing rigidity with deformity of the chest wall (2,4,6). Most importantly, hemodynamic stability of the patient is mandatory before surgery is taken into consideration (2).

Moreover, muscle sparing technique and the muscles root re-insertion at the end of the fixation, without section of the muscles fibers, reduces postoperative pain and is associated with a low rate of early/late postoperative complications, as we report also in our study, even if this surgical approach appears to be very invasive (19).

The best prosthetic material to be used for fixation still remains controversial (2,6). Resorbable material for the fixation seems to avoid the main complications of the prosthetic material itself (4,10,13-15). In intra-medullary fixation for example, there is postoperative risk for wire dislodgement; moreover, migration through the skin has been reported in animal testing (8). Ribs cerclage may potentially crimp the intercostal neurovascular bundle, which may lead to postoperative and chronic pain (2,6-8) Metal and titanium prosthesis in younger patients, where the process of skeletal growth is still ongoing, are not primarily recommended to be used, also because of a second intervention for prosthetic removal (20).

In addition, ribs do not have the stress tolerance such as other bones and so do not often have the ability to hold cortical screws (2,10,15). All these complications could be avoided simply by utilizing resorbable material. This has shown to allow micro-movement of the fracture line, stimulating osteoclast activity and so callus formation, as well as a gradual force transfer from the stabilization material to the rib which thus enables the stresses and mechanical loads to be gradually transferred to the rib until there is a complete healing of the fracture favouring a more genuine healing of the bone (10,13,15). In addition, the bioprosthetic materials can be easily shaped according to the anatomy of the rib, and can potentially do not impair the elasticity and compliance requirements of the thorax (8,13).

This study was unavoidably limited by its retrospective nature and by the small sample size. In conclusion, our study shows that in the case of severe thoracic trauma and chest wall destruction, which resulted in flail chest and respiratory distress, our modified “Shaw-Paulson approach” and prosthetic-free fixation technique should be considered as a valuable option of chest stabilization, with the possibility of simultaneous lung exploration without using prosthetic material.

Reporting Checklist: The authors have completed the STROBE reporting checklist. Available at http://dx.doi.org/10.21037/jtd-21-111

Conflicts of Interest: All authors have completed the ICMJE uniform disclosure form (available at http://dx.doi.org/10.21037/jtd-21-111). The authors have no conflicts of interest to declare.

Ethical Statement: The authors are accountable for all aspects of the work in ensuring that questions related to the accuracy or integrity of any part of the work are appropriately investigated and resolved. The study was conducted in accordance with the Declaration of Helsinki (as revised in 2013). The study was approved by regional ethics board of Vorarlberg and individual consent for this retrospective analysis was waived.