Sepsis has a massive impact on human lives worldwide and results in millions of deaths each year. The definition and diagnosis of sepsis have evolved through 3 historic stages. In Sepsis 1.0, the initial definition, sepsis was viewed as resulting from systemic inflammatory response syndrome to infection. In 2001, the 2nd consensus was formalized, expanding the diagnostic criteria. It was not until 2014, when the 3rd definition was published, that sepsis was recognized as life-threatening organ dysfunction caused by a dysregulated host response to infection. Sepsis 3.0, which was released in 2016, established sepsis as a syndrome shaped by host factors and pathogenic infection which leads to organ dysfunction, and also updated our knowledge of septic shock (1,2).

Sepsis-induced cardiomyopathy (SICM), or sepsis-induced myocardial dysfunction, was first recognized in 1984. Multiple mechanisms have been proposed in SICM, such as systemic inflammation, oxidative stress and mitochondria dysfunction. However, it still lacks definitive diagnostic criteria. Consequently, SICM is often underdiagnosed or missed during regular clinical work, and it is believed to result in high mortality (3). Most experts agree that characteristics of SICM include acute and reversible cardiac dysfunction within 7 to 10 days after sepsis, with left ventricular dilation, global dysfunction, or reduced contractility. Patients with SICM rely on catecholamines and have diminished responses to fluid resuscitation (4). In this single-center study, we retrospectively analyzed data of patients who had developed postoperative SICM after undergoing general thoracic surgical procedures (in the lung, esophagus, trachea, and mediastinum) between 2018 and 2019. We present the following article in accordance with the STROBE reporting checklist (available at http://dx.doi.org/10.21037/jtd-21-492).

From October 2018 to October 2019, 15,484 consecutive patients received general thoracic surgery in Shanghai Chest Hospital, Shanghai Jiao Tong University. Among them, 163 patients with sepsis were enrolled into the present study. This study was approved by Shanghai Chest Hospital Clinical Research Ethics Committee (No. IS2115) and was conducted in accordance with the provisions of the Declaration of Helsinki (as revised in 2013). Individual consent for this retrospective analysis was waived.

Sepsis was defined according to Sepsis 3.0, i.e., a change in sepsis-related organ failure assessment (SOFA) score ≥2 points as a consequence of infection. Patients who were previously diagnosed with structural heart disease, coronary artery disease, or preoperative cardiac dysfunction were excluded.

Sepsis severity was determined according to the SOFA score (Table 1). During sepsis, troponin I (TnI) and B-type natriuretic peptide (BNP) were measured, and echocardiography was performed. SICM was confirmed by echocardiography. Echocardiographic measurements were performed using a GE ultrasound system (Vivid 9, GE, Norway). Stroke volume (SV), left ventricular ejection fraction (LVEF), and the mitral peak velocity of early filling/early diastolic mitral annular velocity (E/e’) (e’ was obtained by Tissue Doppler imaging) were calculated from the apical 4-chamber view using Simpson’s method. Since LVEF is often “better” than preoperative LVEF in patients with sepsis, we chose SV for grouping. Taking 60–80 mL as the normal SV and SV <60 mL as SICM, after propensity score matching, we divided the patients into 2 groups: the SICM group (SV <60 mL) and the non-SICM group (SV ≥60 mL). Twenty-one perioperative characteristics were compared between the 2 groups.

All statistical analyses were performed with SPSS 25.0 (IBM, USA) for Windows. Quantitative variables were described as means and standard deviations. The test of homogeneity variance was used to determine the distribution of quantitative data. When variables had a normal distribution, the independent-samples t-test was used to compare the quantitative sizes of 2 independent samples. The dependence of qualitative variables was assessed using the chi-square (χ2) criterion. Multivariate stepwise forward logistic regression analysis was adopted for the identification of independent risk factors for perioperative survival in our center. To reduce the influence of confounding factors, propensity score matching was carried out (Tables 2,3). Receiver operating characteristic (ROC) curves were drawn to assess the sensitivity and specificity of predictors of SICM. 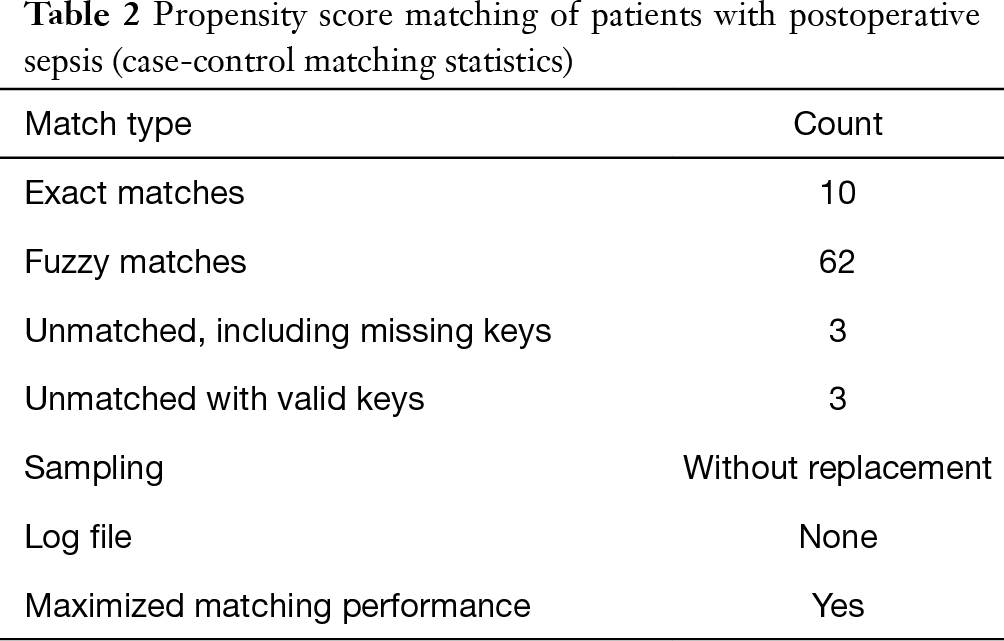 Between October 2018 and October 2019, 163 consecutive patients who developed sepsis after undergoing general thoracic surgical procedures, including lung, esophageal, tracheal and mediastinal operations, in Shanghai Chest Hospital were included in our study. The patients ranged in age from 22 to 87 years old, with a mean age of 64.32±9.93 years old. Males accounted for 84.7% of enrollees.

For the patients in the study, the mean SOFA score was 5.94±1.85. The overall in-hospital mortality rate was 32.5%. The incidence of postoperative SICM was 53.99%. Perioperative characteristics of the patients are shown in Table 4. Multivariate logistic regression analysis revealed SV and C-reactive protein (CRP) to be independent predictors of mortality in patients with postoperative sepsis (Table 5). 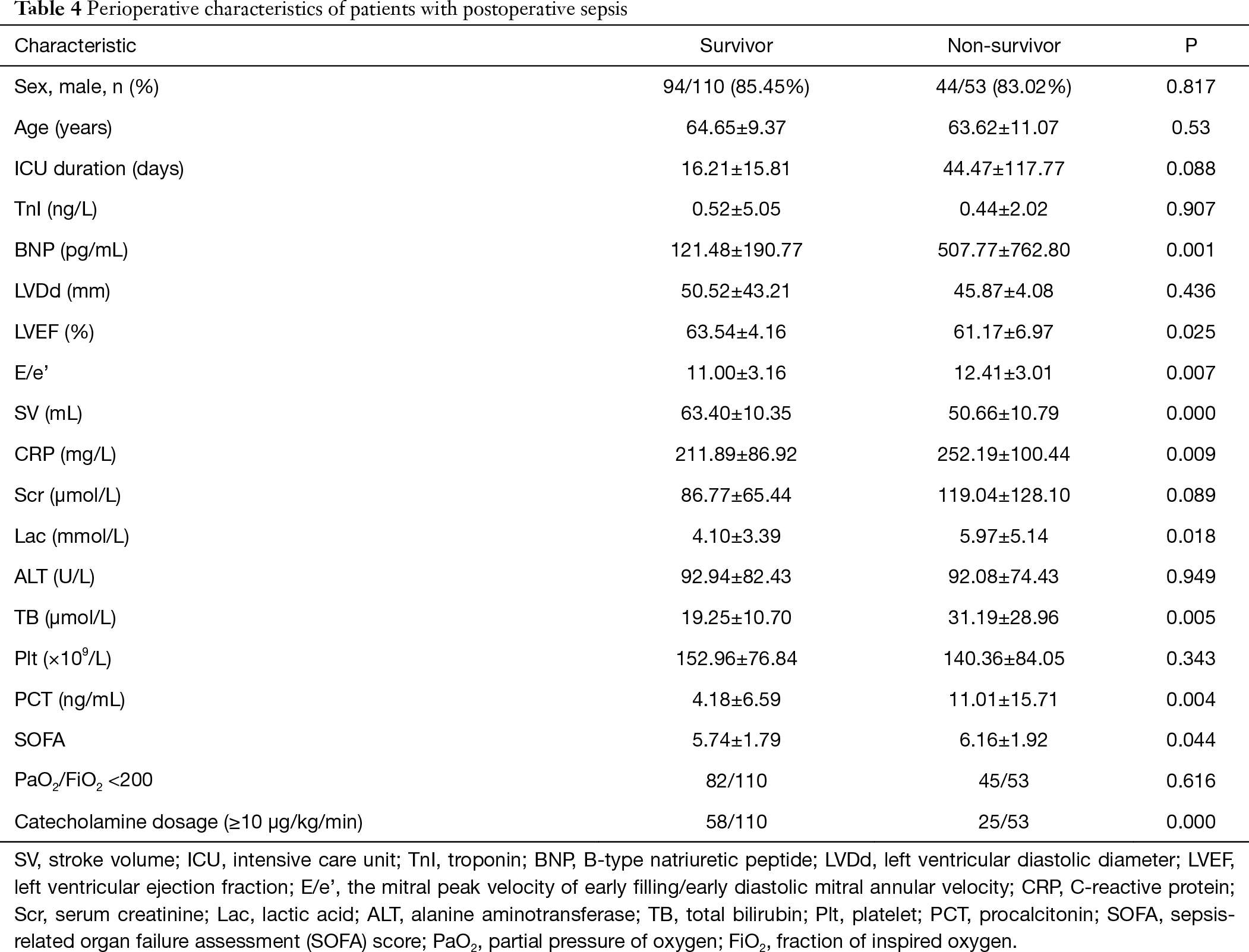 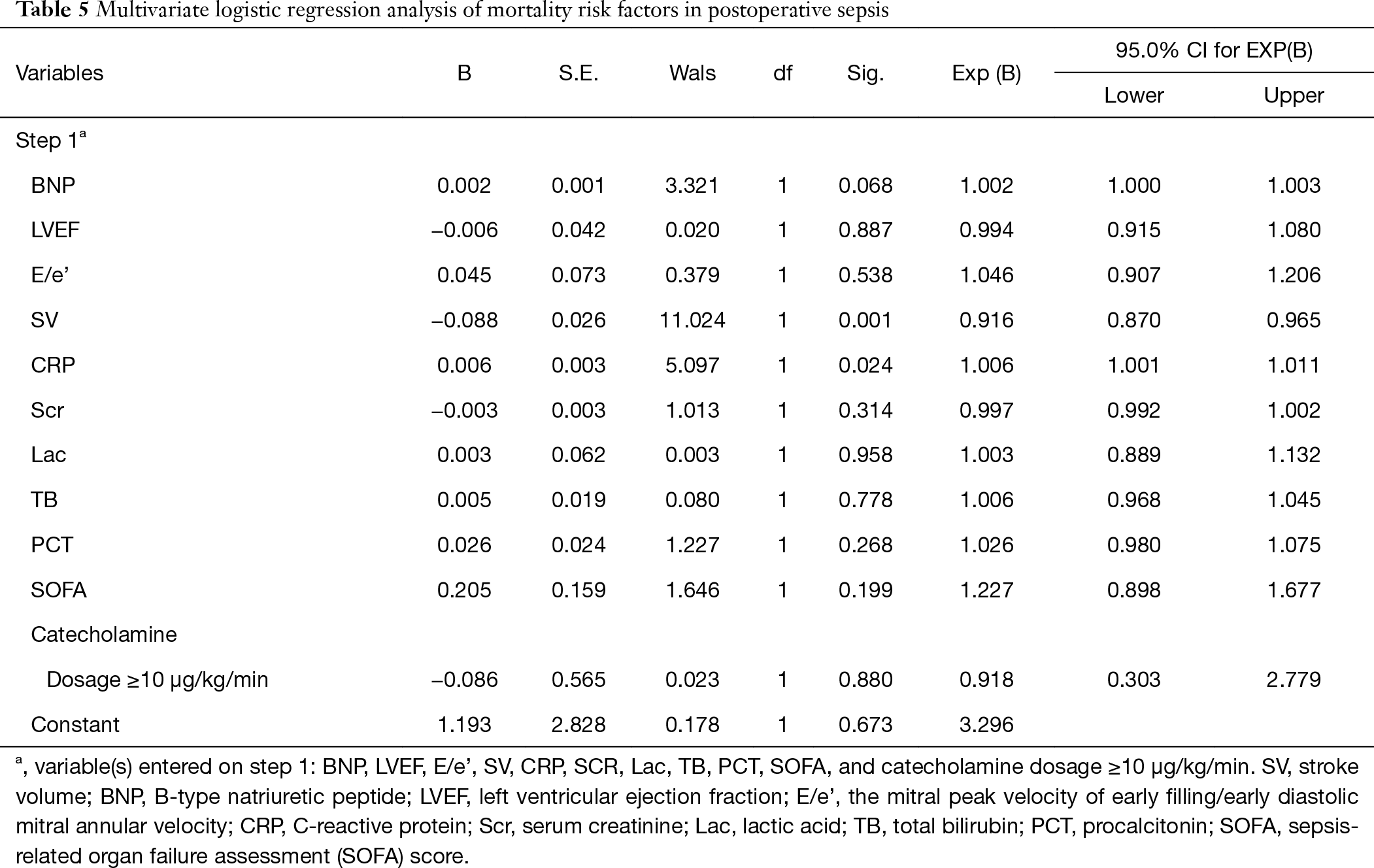 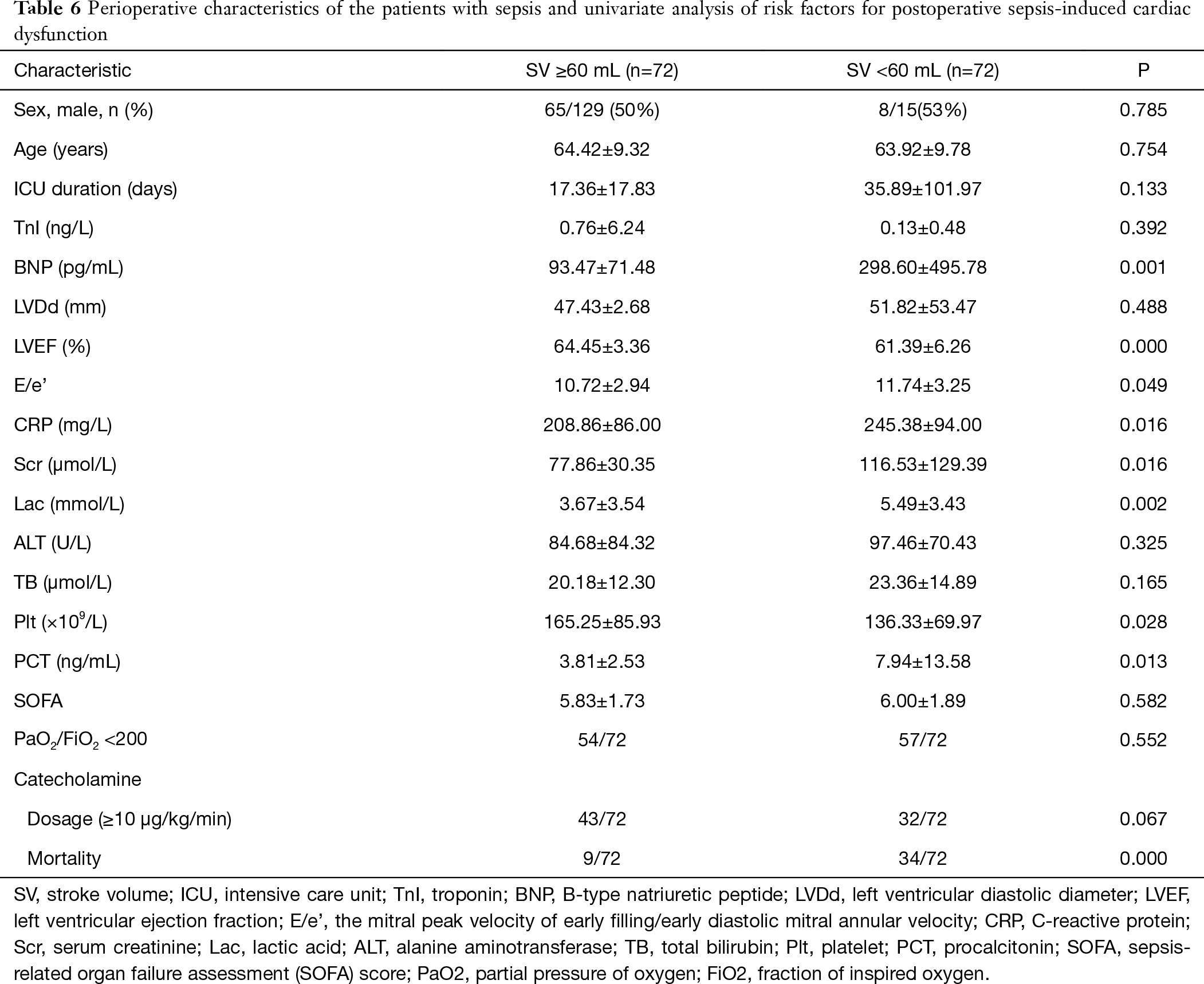 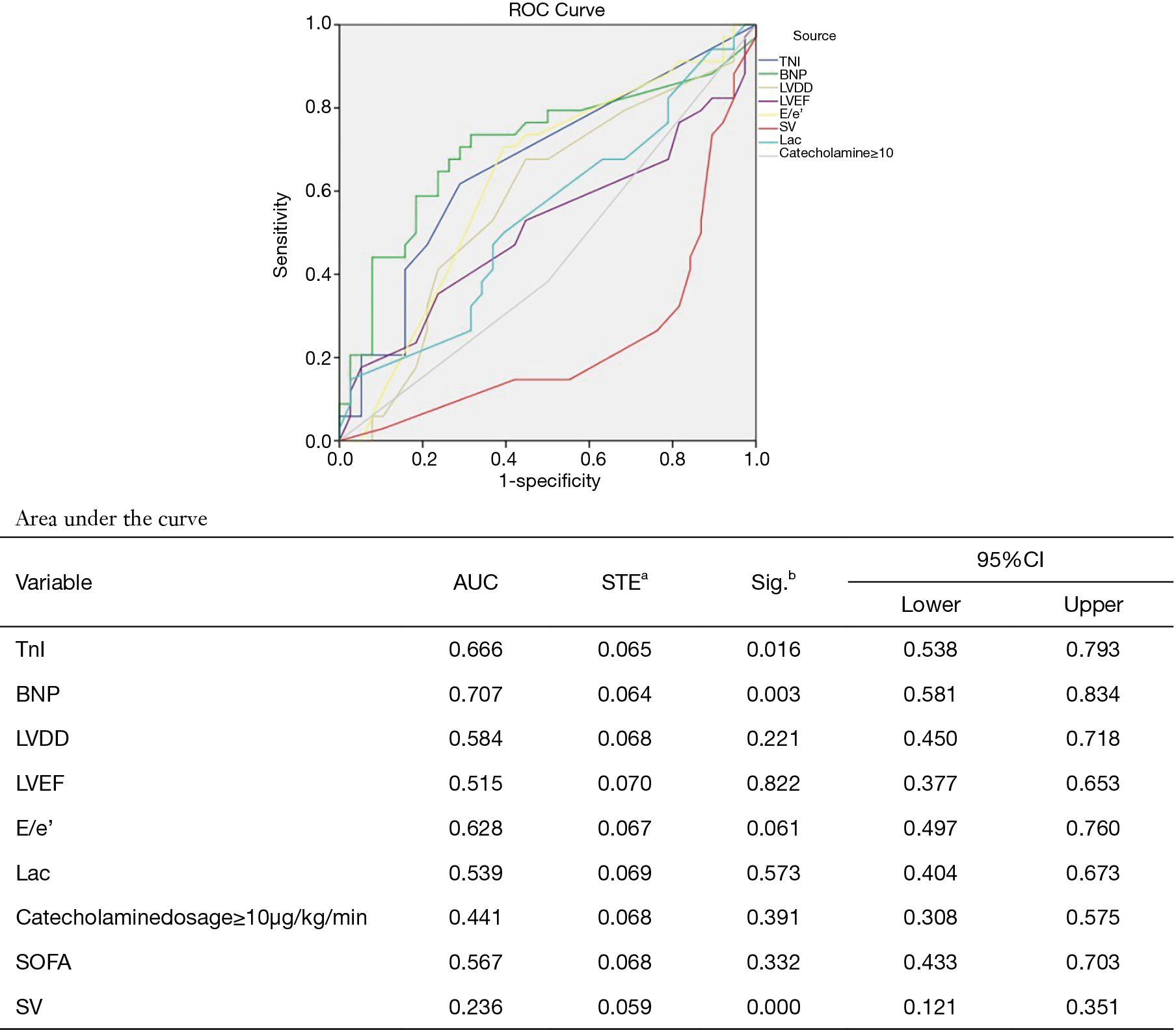 SICM is defined as reversible myocardial systolic and diastolic dysfunction caused by sepsis. Previous studies have shown that approximately 50% of patients with sepsis exhibit signs of myocardial dysfunction, such as poor systolic or diastolic function, ventricular dilation, and a poor response to resuscitation with fluids and catecholamines (5,6). However, in the absence of definitive diagnostic criteria, SICM is often underdiagnosed or missed during regular clinical work. Few studies have reviewed the clinical data of SICM after general thoracic surgery. Therefore, our study set out to determine the incidence of SICM among patients with sepsis following thoracic surgery, and to identify the risk factors and potential management strategies for SICM.

Sepsis is a hyperdynamic process characterized by an increase in cardiac output and low systemic vascular resistance (7-9). Septic shock is a type of sepsis that manifests with unstable hemodynamics and abnormal metabolism (10,11), for which the mortality rate exceeds 40%. Sepsis 3.0 updated our knowledge of sepsis and septic shock. The most popular scoring systems for assessing critically ill patients are APACHE II (Acute Physiology and Chronic Evaluation Scoring System II) and the SOFA score. The SOFA score has been proposed as a rapid clinical scoring system for the prognostic stratification of patients with sepsis (12). Organ dysfunction can be identified by an acute change consequent to infection. A SOFA score ≥2 reflects an overall mortality risk of approximately 10% in patients with infection (12). A high SOFA score is often associated with mortality. Therefore, our study enrolled patients with postoperative sepsis who had a SOFA score ≥2. Previous reports have shown that cardiac TnI is correlated with a high degree of left ventricle dysfunction, severity, and mortality in patients with sepsis (13). BNP also has prognostic value in sepsis (14,15). Some studies have already assessed diastolic function in SICM (4,16,17). A reduced e wave (e’ <8 cm/s) and an increased E/e’ ratio are common findings in patients with sepsis and are strong predictors of diastolic cardiac dysfunction in septic shock (18). Recently, an increasing number of studies have focused on right ventricular dysfunction in patients with sepsis (19,20). In the current study, the overall mortality rate among the 163 patients enrolled was 32.5%. SV and CRP were identified as independent predictors of postoperative sepsis outcome. Further, E/e’, BNP, LVEF, SOFA, Lac, PCT, and TB were also found to be associated with mortality. Among these mortality-associated variables, LVEF, SV, E/e’, and BNP were uncovered as risk factors for SICM. The E/e’ ratio was used as an index of LV filling pressure and a measure of diastolic dysfunction. E/e’ >8 means impaired diastolic reserve with the inability to increase SV after a fluid bolus.

In sepsis, relative hypovolemia and a reduction in vascular tone may result in preserved ejection fraction, temporarily masking cardiac dysfunction. SV and its surrogates are known to perform well as predictors of cardiac function, preload, and fluid responsiveness (17,21). Thus, SV acquired by echocardiography was chosen to group the patients. In this study, SV <60 mL identified patients as SICM. The survival rate, BNP, LVEF, E/e’, Scr, Lac, Plt, PCT, and CRP differed significantly between the 2 groups, suggesting that multiple organ dysfunction, metabolic disorders, and infection were more severe in the SICM group. Moreover, BNP appeared to be the best biomarker for predicting the occurrence of SICM.

In our practice, we focus on the clinical manifestations of both infection and organ dysfunction. For patients who remain hypotensive after initial fluid resuscitation, echocardiography and heart-related biomarkers may aid in recognizing cardiac dysfunction and determining the necessity for inotropes to be administrated. Echocardiography is the cornerstone for the diagnosis of SICM. There is a consensus that all patients who are hemodynamically unstable should receive critical care echocardiography. Hence, besides the standard management, it is equally important to improve diagnostic approaches to SICM. Also, effective drainage and supportive care are essential for patients following surgery. Drainage may sometimes be more efficient than broad-spectrum antibiotics. Supportive care, such as invasive positive pressure ventilation and continuous renal replacement therapy, can be prescribed to improve cardiac function and control systemic inflammatory response. Also, extracorporeal membrane oxygenation may be able to provide hemodynamic rescue for patients who are critically ill with SICM (4,27).

In the present study, over 50% of patients with sepsis exhibited signs of myocardial dysfunction. SV and CRP may be 2 independent predictors of outcomes in postoperative sepsis. BNP is potentially the best biomarker for predicting the occurrence of SICM. A combined strategy comprising early detection of suspected infection, adequate use of antibiotics, close monitoring, effective drainage, and supportive care may improve the outcomes of patients with postoperative SICM.

This research has several limitations. First, the patient population enrolled for analysis was small, and propensity score matching resulted in slight shrinking of the data. Second, this is a single-center investigation. Third, owing to their critical status, the patients in this study did not undergo full examinations. Finally, as this is a retrospective study, potential bias from misclassification could not be completely excluded.

We would like to thank all the surgeons in the Department of Thoracic Surgery in Shanghai Chest Hospital, who perform more than 15,000 surgeries every year.

Funding: This work was supported by grants from the National Natural Science Foundation of China (81830010), the Science and Technology Commission of Shanghai Municipality (18411950400), and the Clinical Research Plan of SHDC (16CR1012A).

Reporting Checklist: The authors have completed the STROBE reporting checklist. Available at http://dx.doi.org/10.21037/jtd-21-492

Conflicts of Interest: All authors have completed the ICMJE uniform disclosure form (available at http://dx.doi.org/10.21037/jtd-21-492). The authors have no conflicts of interest to declare.

Ethical Statement: The authors are accountable for all aspects of the work in ensuring that questions related to the accuracy or integrity of any part of the work are appropriately investigated and resolved. The study was conducted in accordance with the Declaration of Helsinki (as revised in 2013). This study was approved by Shanghai Chest Hospital Clinical Research Ethics Committee (No. IS2115). Individual consent for this retrospective analysis was waived.