Lung cancer is the one of the major causes of cancer-related deaths worldwide (1,2), and non-small cell lung cancer (NSCLC) accounts for 85% of lung cancers (3). In various types of tumors, the crucial role of programmed death (PD)-1 in tumor-induced immunosuppression has been demonstrated (4). Immune checkpoint inhibitors (ICIs) recently became a main anticancer treatment modality in NSCLC due to understanding of the PD-1/PD-ligand 1 (PD-L1) pathway in tumor-related immune reactions (5-7). Nivolumab, a PD-1 ICI antibody, significantly improved survival in patients previously treated for advanced NSCLC compared with docetaxel (8,9). Pembrolizumab and atezolizumab also showed favorable results (10,11).

Biomarkers that are predictive of treatment responses are essential to determine indication for ICI treatment in NSCLC patients (12). Such parameters with prognostic value will enable pretreatment risk-stratification and an appropriate treatment strategy for an individual patient (13). PD-L1 is the only reliable biomarker used to predict ICI responses (10,14). However, despite favorable results in trials, not all PD-L1-positive NSCLC patients benefit from immunotherapy, with substantial heterogeneity in treatment response and survival (15-17).

Systemic inflammation has been proposed as a mechanism of resistance to antitumor activity in cancer and promotes cancer growth, metastasis, and oncogenic signal activation (18). Furthermore, increased systemic inflammatory biomarkers were reportedly associated with poor outcomes in NSCLC patients (3,19-21).

Neutrophil-to-lymphocyte ratio (NLR) predicts disease progression and overall survival (OS) in NSCLC patients (22-24). Derived NLR (dNLR) was used as an alternative to NLR in studies in which lymphocyte count was not available (25) and was shown to predict poor prognosis in both hematologic and solid tumors (26-29). Although NLR and dNLR were shown to have prognostic value in patients with advanced NSCLC who were receiving ICI (22,23), the biomarkers measured at baseline do not reflect changes in inflammatory status after initiation of chemotherapy. Immune responses and the associated expression in tumor cells and cytokines change after starting ICIs, and these variations may be associated with anticancer treatment response (30-32). Early changes in inflammatory biomarkers are potentially a more accurate predictive tool. The serial change in NLR reportedly showed prognostic value in patients with advanced NSCLC who were taking nivolumab (33). However, dNLR has not been evaluated for early variation after immunotherapy.

In the present study, the predictability of clinical outcomes associated with early changes in NLR and dNLR was assessed in a retrospective cohort of patients with advanced NSCLC administered ICI.

We present the following article in accordance with the STROBE reporting checklist (available at http://dx.doi.org/10.21037/jtd-20-3416).

None of the patients enrolled received ICI treatment as first-line treatment due to a government-supervised medical reimbursement policy in Korea.

Response evaluation was performed following Response Evaluation Criteria in Solid Tumors version 1.1 (34). Patients underwent a computed tomography scan after every two treatment cycles, while treating physicians and independent radiologists evaluated the responses. OS was defined as time duration from the date of ICI initiation to death. PFS was defined as the time from ICI initiation to disease progression after first-line treatment. Patients were considered censored when they died or lost contact during the follow-up period (20).

All statistical analyses were performed using the Statistical Package for Social Sciences software version 20.0 (SPSS Inc., Chicago, IL, USA). Data of continuous variables are shown as mean or median with range. The Chi-square test was performed to compare categorical parameters, and continuous variables were compared using two-sided t-test or the Mann-Whitney U test depending on whether the variable were normally distributed.

Comparison between groups stratified based on change in NLR or dNLR 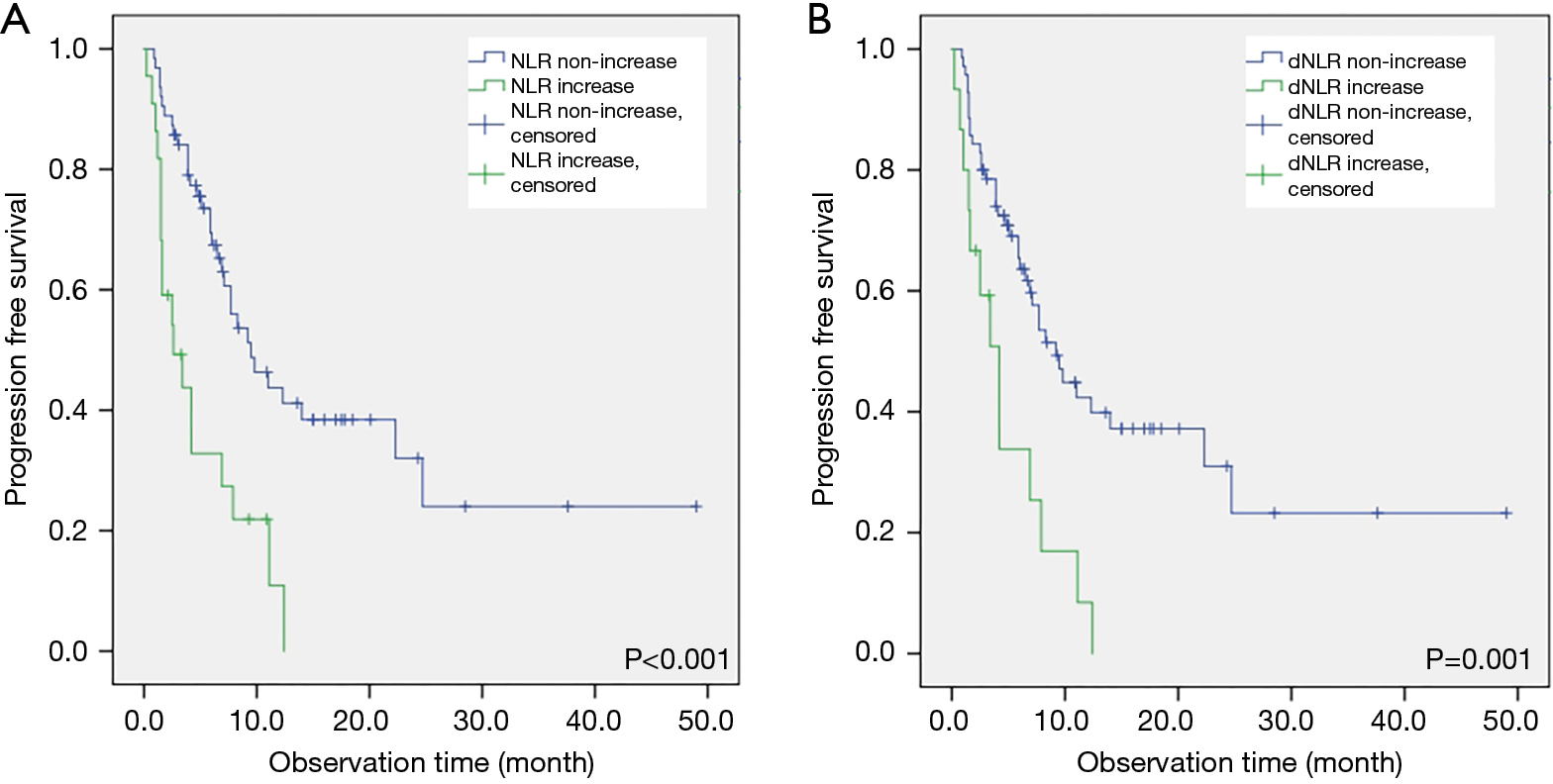 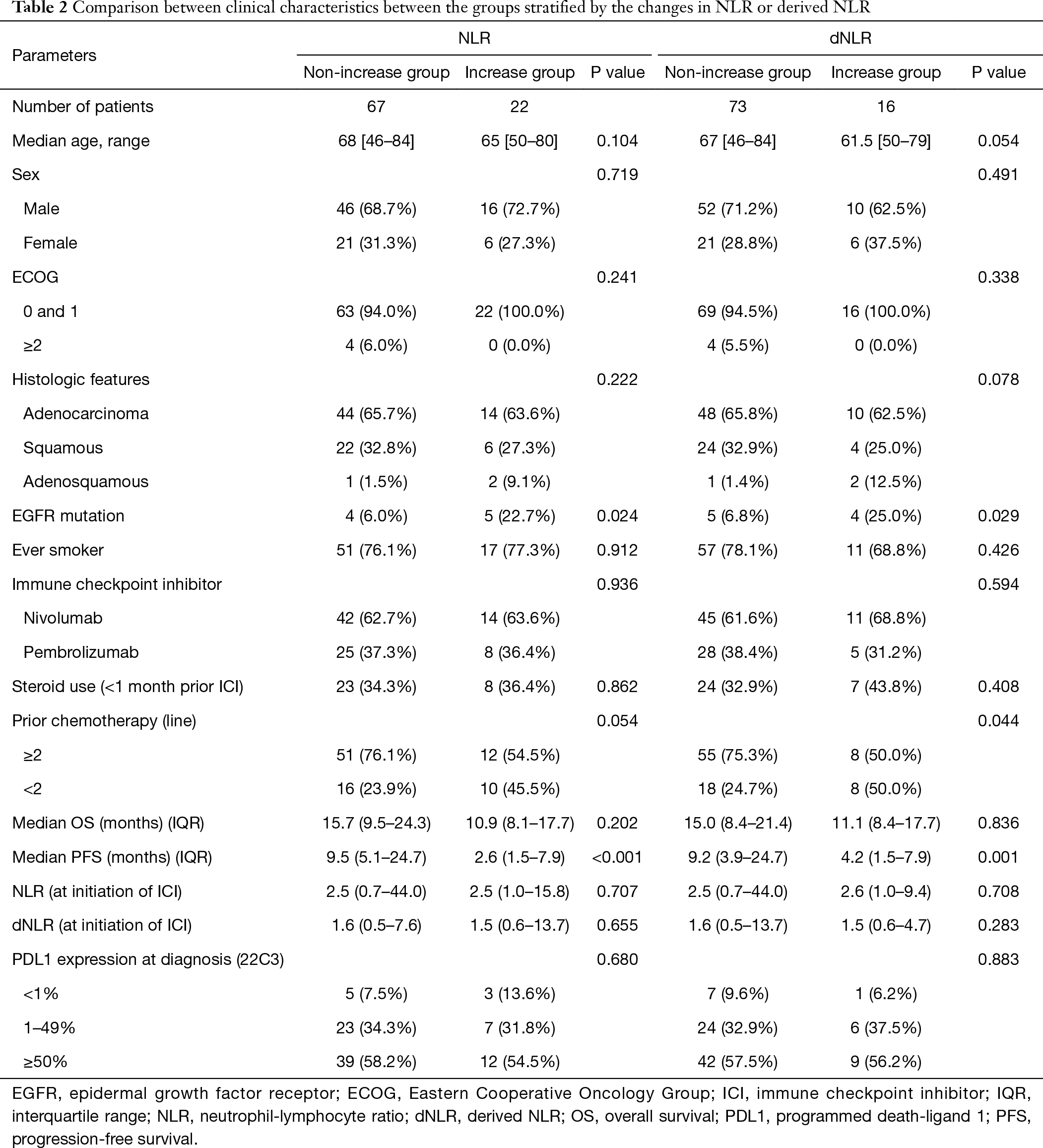 Association with OS and PFS 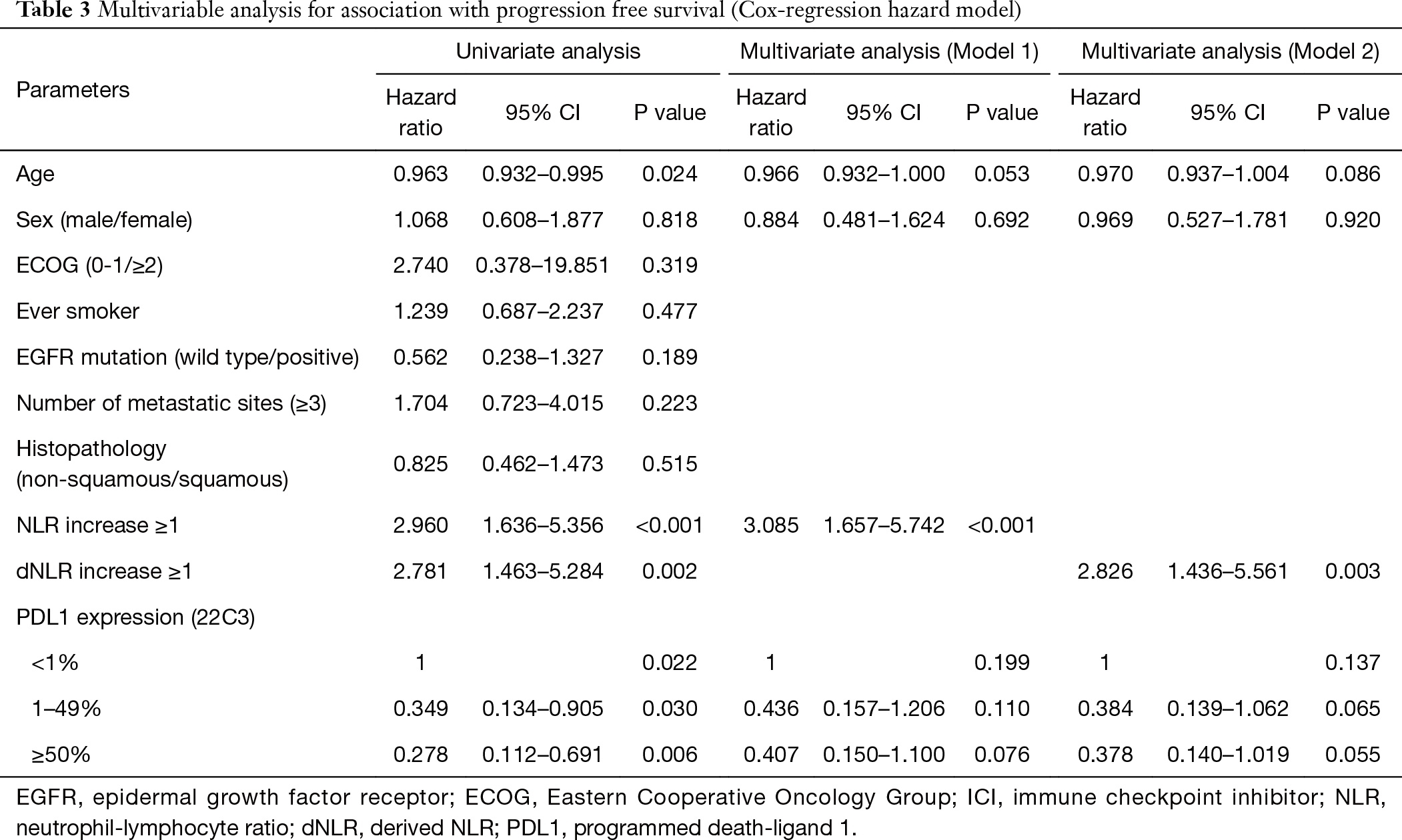 Variation in systemic inflammatory status after initiation of ICI has been reported in several studies. Significant changes in serum cytokine concentrations were observed after initiation of ICI in patients with NSCLC. In the study by Boutsikou et al., early changes in IL-6 and IL-8 were observed and associated with treatment response and survival (32). Sanmamed et al. reported that early change in serum IL-8 level after the start of ICI therapy was associated with treatment response in a study of NSCLC patients treated with nivolumab or pembrolizumab (30). It is assumed that immune responses against tumor cells and associated systemic inflammatory status are not static but dynamic.

ICI has become a mainstay treatment modality for NSCLC, yet, due to relatively shorter clinical treatment experiences, more efforts and studies are necessary for evaluation of biomarkers predicting treatment responses. PD-L1 expression detected based on immunohistochemistry is the most widely used biomarker for identifying candidates with advanced NSCLC who are likely to show favorable response to immunotherapy (35). Other potential biomarkers for response to ICI include tumor mutational burden, which is the total number of mutations, tumor-infiltrating lymphocytes, tumor-specific genotypes, and gene expression signatures from the cancer tissue (36-40). However, tissue-based biomarkers are unfit for serial monitoring, and factors such as sites of biopsy and status of pathologic samples may be bias factors.

NLR and PLR are biomarkers that can be measured in the serum of patients and show correlation with treatment responses to ICI (24,41). Because serum-based biomarkers are available and suitable for multiple measurements, several efforts have been made to increase their predictability. In the present study, early increase of NLR and dNLR showed high predictability for disease progression. Although early change of dNLR was shown to have predictive value in the present study, this biomarker could be used as an adjunct to NLR to assess longitudinal change in inflammatory status associated with tumor cells. This is an inexpensive and easily available biomarker.

The mechanism of the association of increase of dNLR with poor prognosis must be determined. The systemic inflammatory status changed in a relatively short time interval but not in favor of anticancer activity. Neutrophilic inflammation is reportedly associated with metastasis, angiogenesis, and cancer cell proliferation (42-44) and has negative effects on antitumor activities.

When combined with cell-free DNA, an increase in NLR was associated with poor prognosis in a study of patients with NSCLC who were taking nivolumab (33). Similar to NLR, we assumed that early change of dNLR can be used to predict treatment response to ICI, and dNLR may be useful in situations where exact complete blood differential count is not available (45). The serial change of dNLR is significantly more informative than a single measurement. Furthermore, considering that lymphocytes were suggested to have essential roles in antitumor activities (28,46), it is likely that an early increase in dNLR represents inefficacious treatment response after initiation of ICI therapy.

Several limitations are present regarding the study results. First, the small number of study patients is a limitation of the present study. It is possible that clinical effects of some parameters would change if the number of study patients was larger. Despite the small sample size, the biomarkers investigated showed significant association. Second, a direct comparison with other reported biomarkers such as baseline NLR was not done in our study due to the limited sample size. Future studies including larger study cohorts are necessary for further validation.

As early change in dNLR was shown to have prognostic value for patients undergoing immunotherapy, it can be used to predict early disease progression in patients with advanced NSCLC receiving ICI treatment.

Reporting Checklist: The authors have completed the STROBE reporting checklist. Available at http://dx.doi.org/10.21037/jtd-20-3416

Conflicts of Interest: All authors have completed the ICMJE uniform disclosure form (available at http://dx.doi.org/10.21037/jtd-20-3416). The authors have no conflicts of interest to declare.