In recent years, opportunities for lung segmentectomy for early-stage lung cancer with ground glass opacities and small nodules have been increasing (1). Segmentectomy is also an effective surgical procedure for frail cases that cannot tolerate radical surgery for primary lung cancer and cases with metastatic tumors near the hilum. Segmentectomy is usually categorized into common (simple) and uncommon (complex) segmentectomy, and uncommon segmentectomy is technically more complicated because blood vessels and bronchi need to be identified to the periphery and dissected, and there are multiple intersegmental planes to be separated.

Rocco first reported Uniportal video-assisted thoracoscopic surgery (U-VATS) for wedge resection in 2004 (2). Gonzalez-Rivas first reported single-incision VATS lobectomy in 2012 (3,4), and afterwards reported U-VATS segmentectomy (5). The potential benefits of U-VATS reported so far are wound pain reduction, neuralgia reduction, and cosmetic aspects (6-10). However, U-VATS has some difficulties compared with multiportal VATS (M-VATS) because the angle of the forceps is limited, and the stapler is inserted in only one direction. Therefore, there are concerns that uncommon segmentectomy by U-VATS will have some technical problems and increase the risk.

We present the following article in accordance with the STROBE reporting checklist (available at http://dx.doi.org/10.21037/jtd-21-292).

The study was conducted in accordance with the Declaration of Helsinki (as revised in 2013). The study was approved by the institutional ethics board of Maebashi Red Cross Hospital (NO.: 2020-52), and individual patient consent for this retrospective analysis was waived. 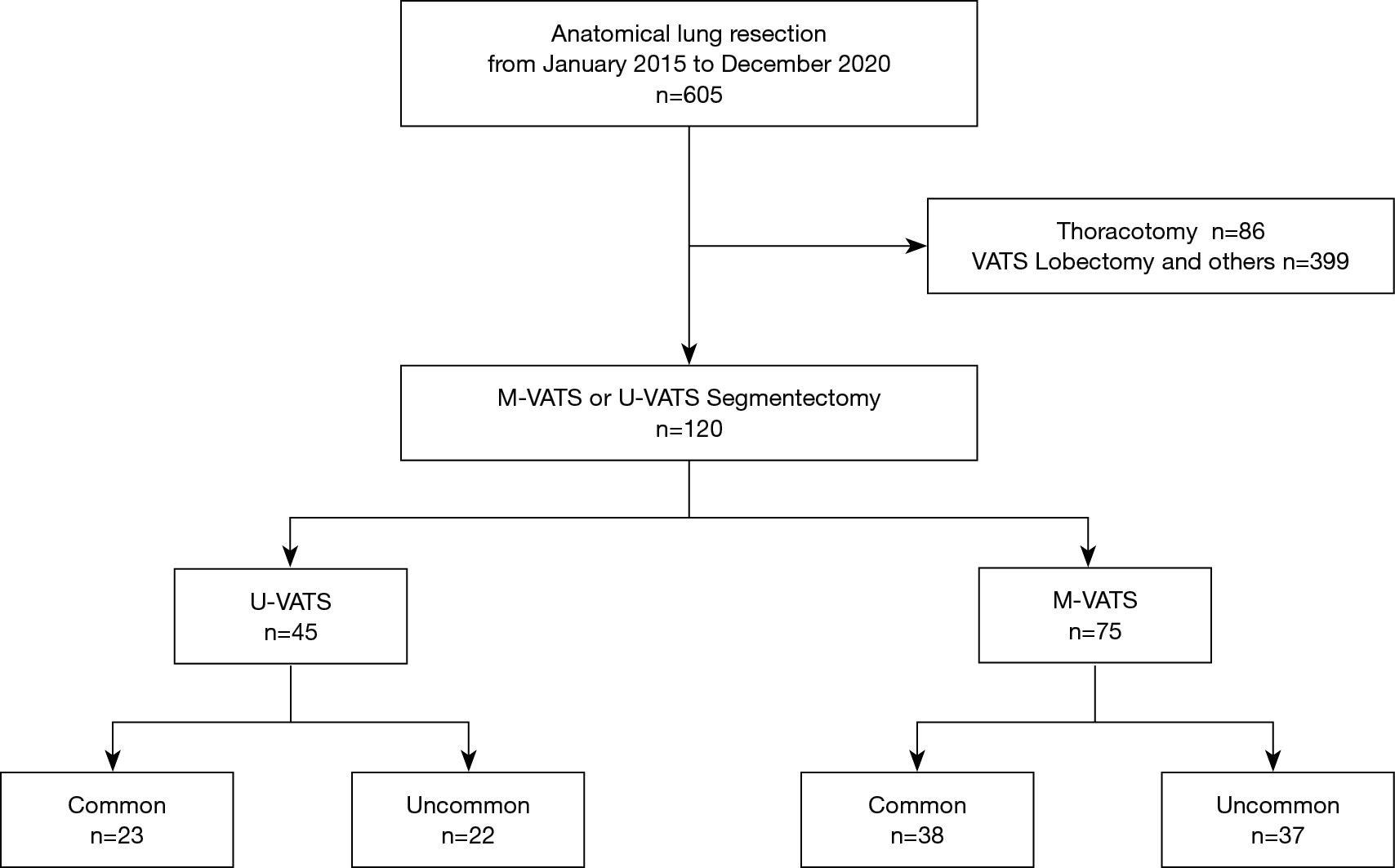 All patients in our department, except for cases with contrast agent allergy, underwent preoperative three-dimensional computed tomography (3D-CT) angiography and bronchography to image bronchovascular structures and tumor location and determine the resection line.

In our department, the standard curative surgery for primary lung cancer is lobectomy with systemic lymph node dissection. In patients who underwent intentional segmentectomy for primary lung cancer, clinical stage 0-IA1 (Tis-1aN0M0) was confirmed by careful preoperative staging with CT and/or FDG-PET. For patients who could not tolerate radical surgery due to complications and poor pulmonary function, segmentectomy was also performed as reduction surgery. In patients with metastatic lung tumors, segmentectomy was performed only when it was difficult to secure enough margin in wedge resection due to the location and size of tumor.

The study was approved by the institutional ethics board of Maebashi Red Cross Hospital (NO.:2020-52), and individual patient consent for this retrospective analysis was waived.

Surgery was carried out under general anesthesia in all cases, with the patient in the lateral decubitus position under differential lung ventilation. The operator always stood on the ventral side and the assistant on the dorsal side of the patient. A 3.5–4.0-cm skin incision was made in the fourth intercostal anterior axillary line for right upper lobectomy or the fifth intercostal anterior axillary line for other types of surgery and an XS Alexis wound retractor (Applied Medical, Rancho Santa Margarita, CA, USA) was fitted. Either a 5-mm or 10-mm 30º degree thoracoscope was immobilized on the dorsal side of the wound margin, with the ventral side providing space for the operator to manipulate the scope. Vessel and bronchial transection were in principle carried out with an automated suturing device, but suture ligation with 3-0 silk was performed if required by the vessel diameter. The inflation-deflation technique was normally used for segment identification. From May 2020, indocyanine green (ICG) was administered intravenously and an infrared thoracoscope was also used for observations. In almost all cases, intersegmental division was accomplished using only an automated suturing device, but for some patients a cautery was used where necessary. The chest drain was placed from the ventral side of the wound. As an example, detailed procedures for right apical segmentectomy (S1) are shown in Figure 2. 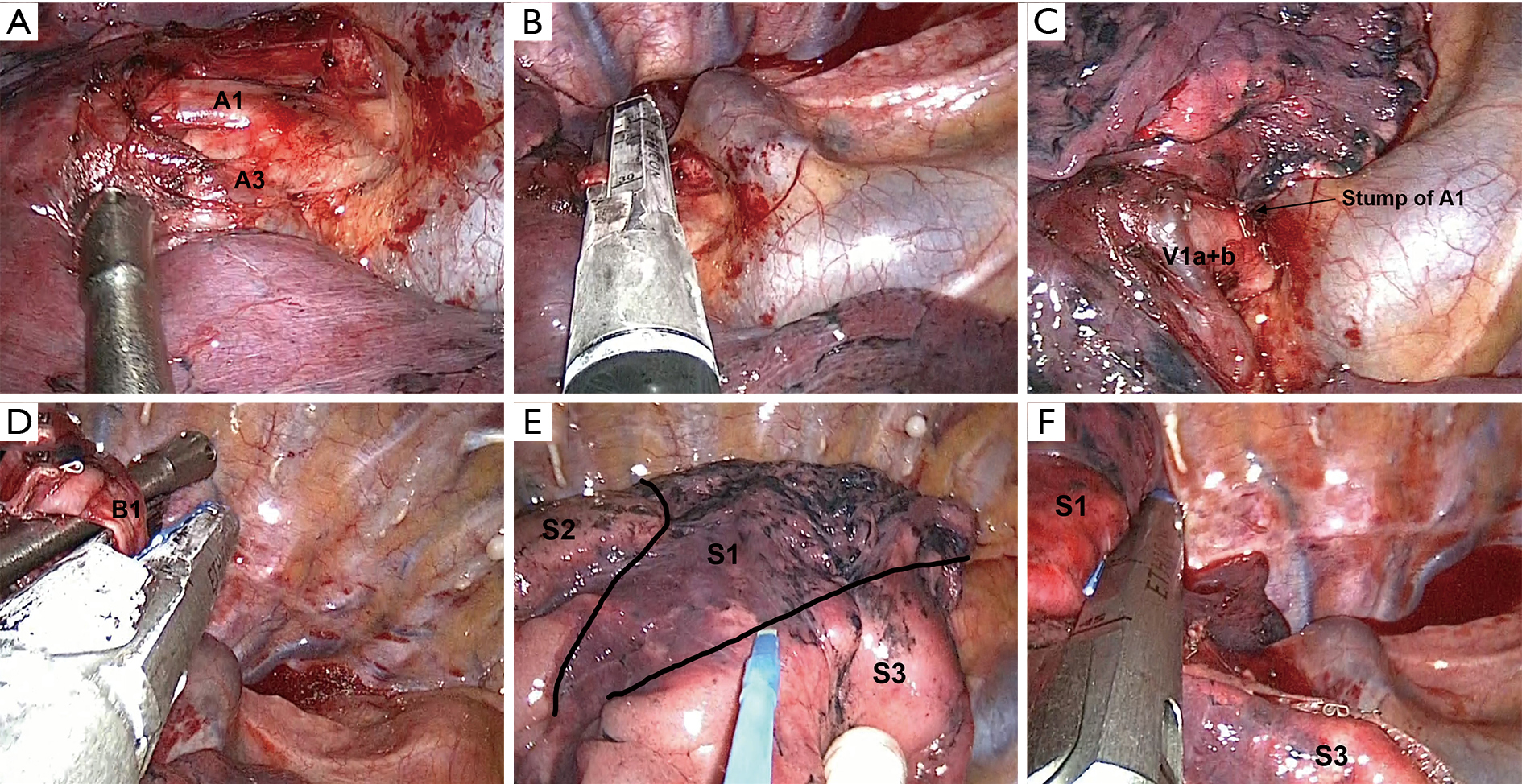 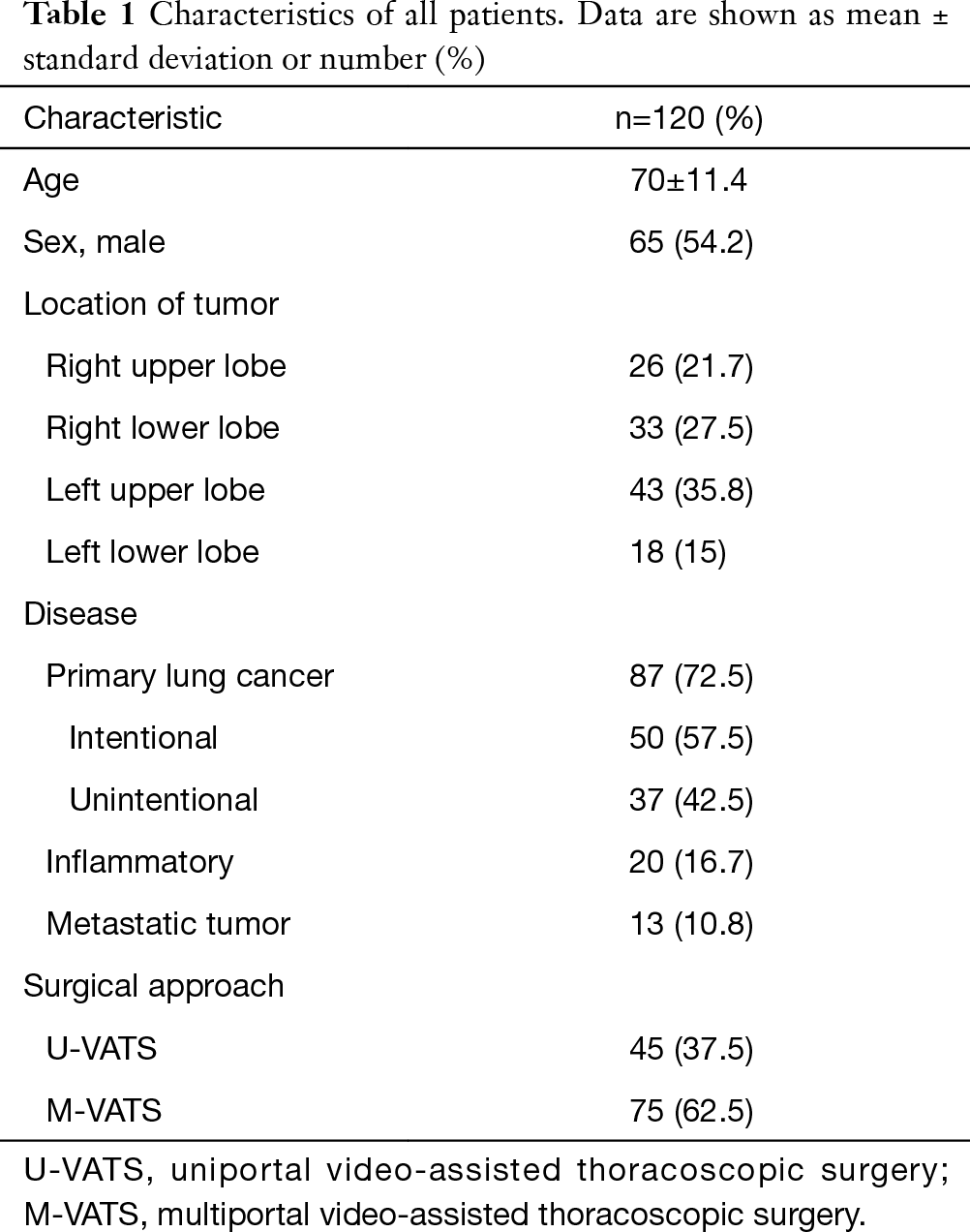 Table 1 Characteristics of all patients. Data are shown as mean ± standard deviation or number (%)
Full table 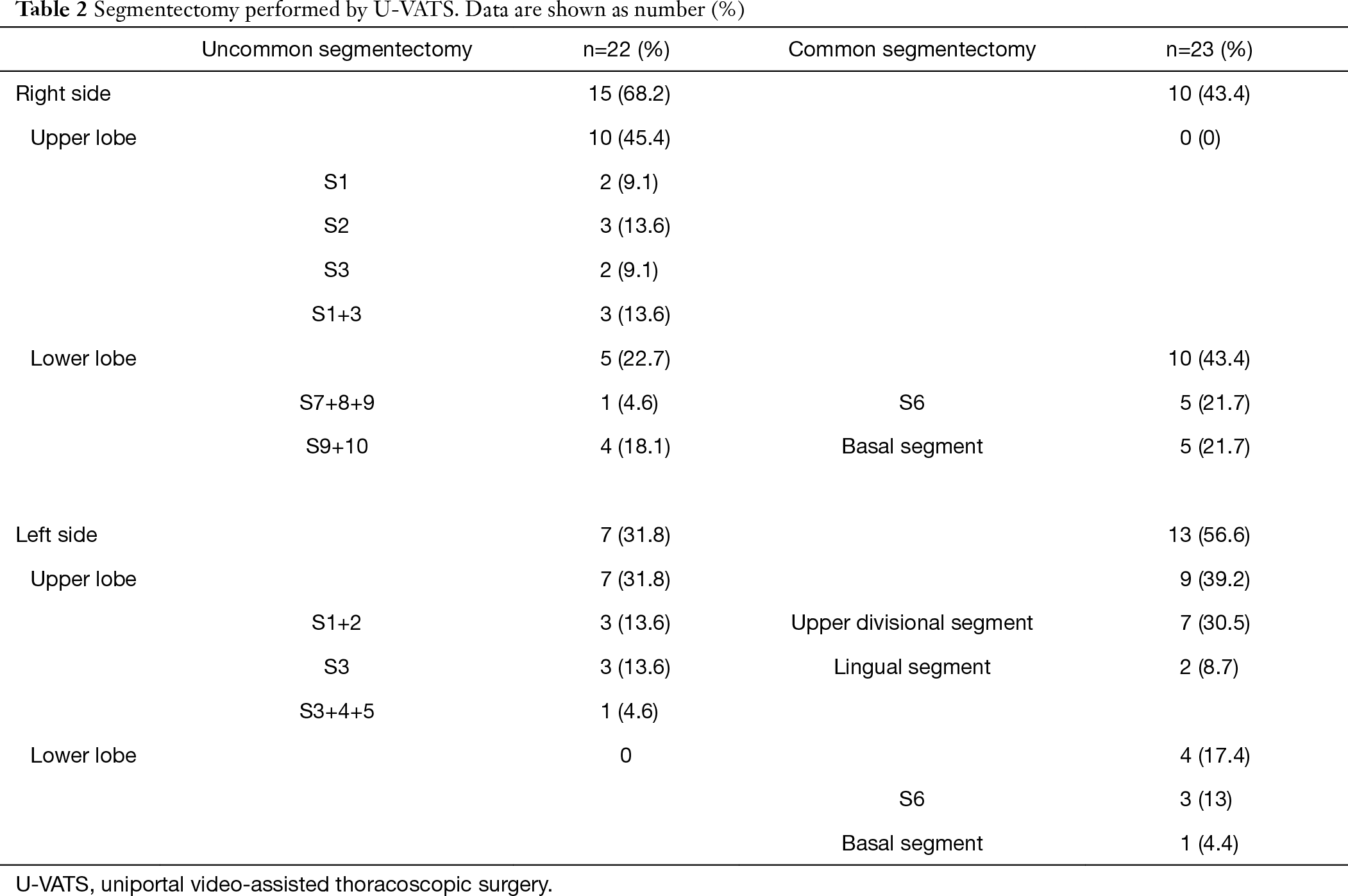 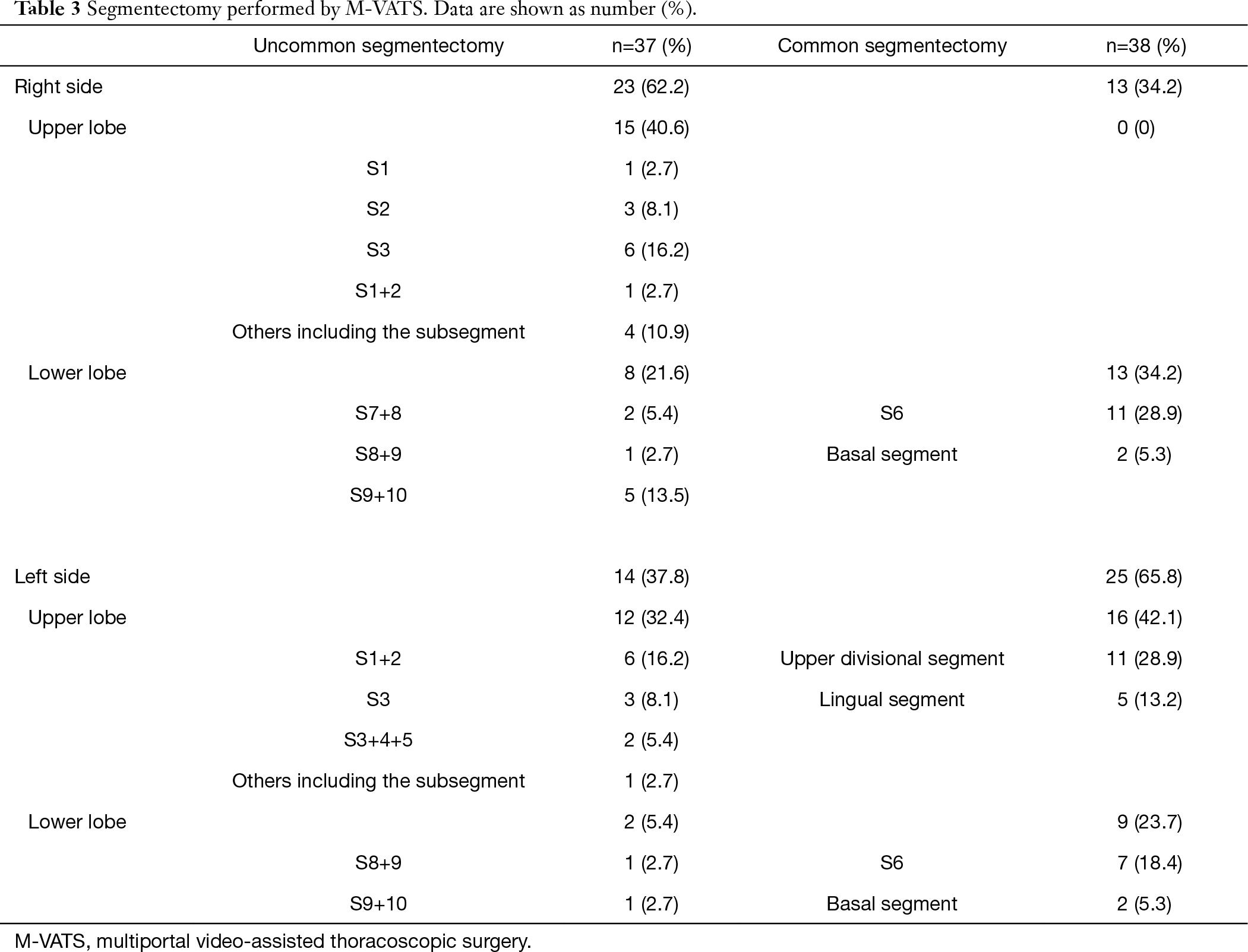 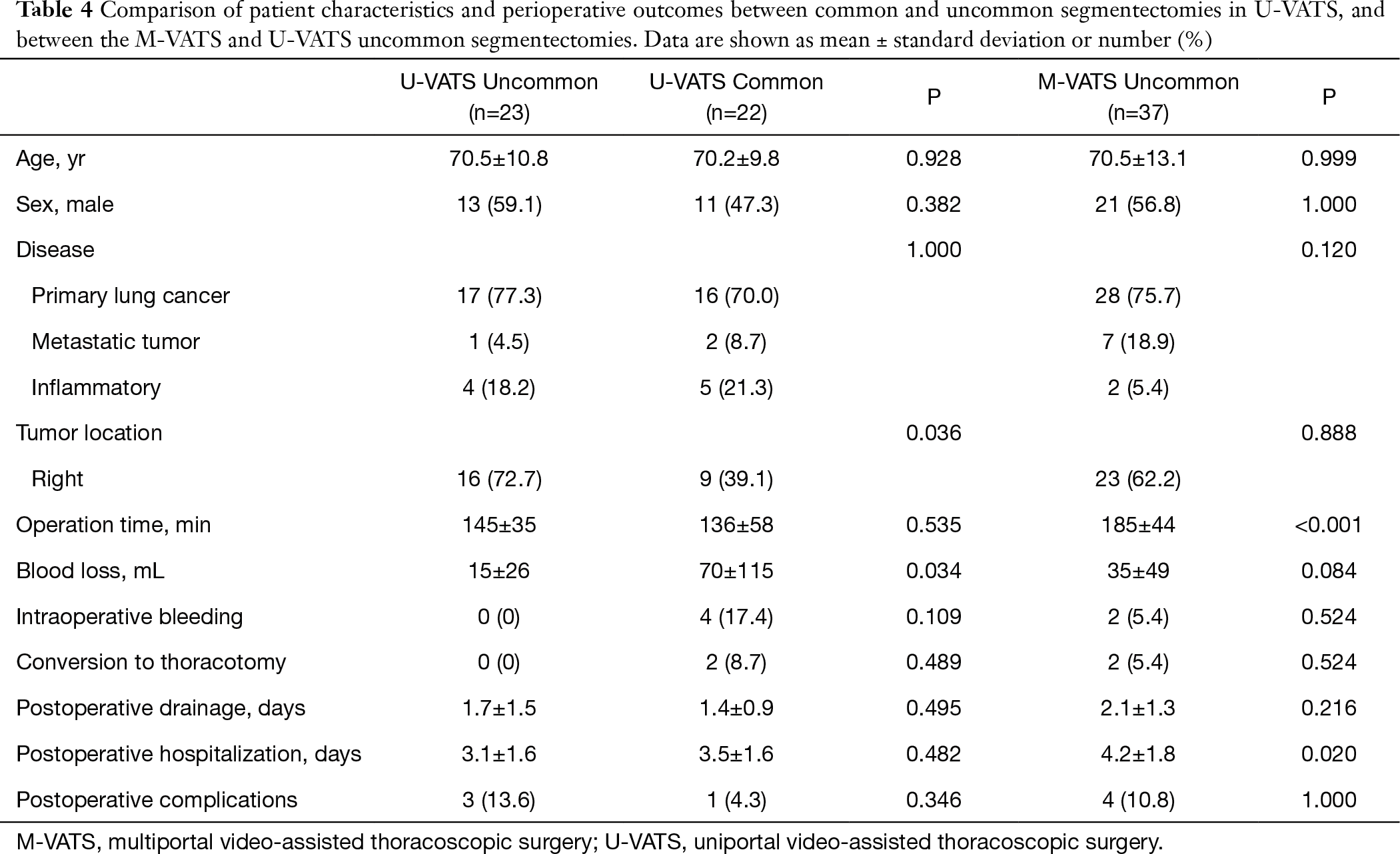 Although the standard radical surgery for primary lung cancer is still lobectomy (12), ground glass opacity (GGO) on thin-section CT has been shown to have a very good prognosis, and sublobar resection has become widespread (13). For metastatic lung tumors and inflammatory disease, sublobar resection is also performed. Segmentectomy can be performed even for lesions that are not present on the periphery of the lung and cannot be palpated, while ensuring sufficient margin, combined with preoperative 3D-CT simulation. However, uncommon segmentectomy is technically challenging in terms of treating fragile vessels and peripheral bronchi and creating several intersegmental planes. Handa et al. evaluated operative and postoperative outcomes of complex and simple segmentectomies and showed that only median operative time (180 vs. 143.5 min, P<0.0001) was significantly longer in the complex group (11). Xie et al. also reported that in both U-VATS (P<0.001) and M-VATS (P=0.011), operation time was significantly longer in the complex segmentectomy group than in the simple segmentectomy group (14). Moreover, in a randomized controlled trial to confirm the noninferiority of segmentectomy to lobectomy (JCOG0802/WJOG4607L), complex segmentectomy was a predictor of air leak and empyema (grade ≥2) (odds ratio, 2.07; 95% CI, 1.11–3.88; P=0.023) (15). This may be due to the procedure of creating a fissure, which included cautery, stapler and cautery, or stapler. We mainly use a stapler to create an intersegmental plane, and we previously reported no significant differences in perioperative results including blood loss, operation time, drainage, hospitalization and morbidity between common and uncommon segmentectomy group (16).

Several papers comparing the results of segmentectomy by M-VATS and U-VATS have been reported, all of which were comparable (14,17,18). A technical difficulty with U-VATS is that the angle of the forceps and stapler insertion is limited. In U-VATS, the camera is basically fixed to the dorsal side of the wound edge to secure the operator’s space on the ventral side, and a curved long suction tube is used to avoid interference of the forceps. By arranging them in the optimal position inside and outside the thoracic cavity, smooth operation is possible. Ligation with 3-0 silk is also useful for vessel dissection when a stapler is not adequate in segmentectomy. Before creating the intersegmental plane, the distal bronchial and vessel stumps are fully dissected from the surrounding tissue to the periphery, creating the space for stapler insertion. When inserting the stapler, it is important to move the lungs significantly to match the stapler insertion angle.

Cheng et al. reported about the learning curve for U-VATS segmentectomy, showing that an experienced surgeon can achieve a relatively stable level after 33 cases (19). In the present study, operation time was significantly shorter in the U-VATS uncommon segmentectomy group than in the M-VATS uncommon segmentectomy group. Possible reasons include the following. Firstly, U-VATS was started in 2019, and there may have been an effect due to differences in experience and skill when operators who had previously mastered segmentectomy by performing it numerous times in M-VATS shifted to U-VATS. Secondly, in U-VATS the camera is inserted from the same angle as the operator, meaning that its field of view is consistent with the operator’s viewpoint, and this gives the operator a sense similar to conducting open-chest surgery. Finally, the use of forceps and energy devices designed and developed for U-VATS enabled the operator to carry out dissection effectively and rapidly.

This study has several weaknesses because of its retrospective design. The total number of cases is relatively small, so a prospective and multicenter study is required. In addition, the study period was too short to evaluate long-term outcomes. In particular, it is necessary to examine the long-term oncologic results of cases of primary lung cancer.

Reporting Checklist: The authors have completed the STROBE reporting checklist. Available at http://dx.doi.org/10.21037/jtd-21-292

Conflicts of Interest: All authors have completed the ICMJE uniform disclosure form (available at http://dx.doi.org/10.21037/jtd-21-292). HI serves as an unpaid editorial board member of Journal of Thoracic Disease from Aug 2020 to Jul 2022. The other authors have no conflicts of interest to declare.

Ethical Statement: The authors are accountable for all aspects of the work in ensuring that questions related to the accuracy or integrity of any part of the work are appropriately investigated and resolved. The study was conducted in accordance with the Declaration of Helsinki (as revised in 2013). The study was approved by the institutional ethics board of Maebashi Red Cross Hospital (NO.:2020-52), and individual patient consent for this retrospective analysis was waived.