Despite the rapid expansion of transcatheter approaches for aortic valve implantation, the treatment of choice in patients presenting with multiple valvular heart disease remains surgical aortic valve replacement. Nonetheless, it is well known that cardiopulmonary bypass time and aortic cross-clamp time are important independent predictors of mortality in patients undergoing multivalve procedures (1). Approaches enabling a reduction in ischemia-reperfusion injury during valve procedures are very desirable, especially in the setting of complex valvular pathology and in patients with multiple comorbidities.

Although successful outcomes have been described after SU-AVR for extended indications, including infective endocarditis and bicuspid aortic valves (2), knowledge regarding the presence of a previously implanted mitral valve prosthesis or concomitant mitral valve surgery remains scarce. Indeed, SU-AVR in multivalve disease procedures is generally seen as problematic due to the possible interference of both prostheses at the level of the aorto-mitral continuity (5). Given this concern, SU-AVR is often excluded during when deciding the surgical approach of choice in patients presenting with multiple valvular pathologies.

To examine the validity of this concern, we sought to review our clinical experience with SU-AVR in the setting of multivalve procedures and address the postoperative outcomes and technical challenges.

We present the following article in accordance with the STROBE reporting checklist (available at http://dx.doi.org/10.21037/jtd-21-300).

Preoperative evaluation of patients was performed by the interdisciplinary Heart Team at our institution, consisting of a cardiac surgeon, interventional cardiologist, and cardiac anesthesiologist. Postoperative echocardiographic evaluation of the implanted valve prosthesis function was performed before hospital discharge. Data was collected prospectively as a part of our institutional database, including detailed information on patients’ demographics; baseline clinical characteristics; their laboratory, echocardiographic, and hemodynamic parameters; intraoperative variables; and postoperative outcomes. The study was conducted according to the Declaration of Helsinki (as revised in 2013). The ethical board of our institution approved the study protocol and data gathering and waived the need for individual informed consent (number of ethics approval 20-9738-BO). All patients signed the informed consent on follow-up.

The chest was accessed via median sternotomy. Normothermic cardiac arrest was performed for all procedures. Cardiopulmonary bypass (CPB) was initiated with the direct cannulation of the ascending aorta and right atrium (with the exception of procedures involving tricuspid valve, here the bicaval cannulation was performed). Custodiol-HTK (Köhler Chemie GmbH, Bensheim, Germany) was administered via aortic route. A high transverse aortotomy was performed and the native aortic valve was decalcified and excised in toto.

Consequently, the Perceval S (LivaNova) sutureless aortic valve was implanted. It is crucial to size the sutureless prosthesis after the mitral valve procedure is completed. Indeed, the retractors used for the mitral valve procedure might lead to malpositioning of the sutureless aortic valve prosthesis. It should be noted that even the correct implantation of the prosthesis causes partial restriction of the LVOT. Therefore, the size of the sutureless prosthesis measured prior to the mitral valve implantation might not fit anymore. Following the decision on the size of the prosthesis, three 4.0-prolene guiding sutures were placed in the middle point of each nadir, and the subsequent implantation was carried out in Snugger-technique, as previously described (6). The aortotomy was closed with 4.0-prolene double layered suture. After assessment of the prosthetic valves performance and careful de-airing using transesophageal echocardiography, the patient was separated from the CPB. The anticoagulation was reversed and after securing the hemostasis, the chest was closed with steel wires in routine fashion.

In patients requiring coronary artery bypass surgery (CABG) left internal thoracic artery (LITA) was harvested using a pedicled or skeletonized technique, at the surgeon’s discretion. As soon as cardioplegic arrest was initiated, target coronary vessels were identified and distal coronary anastomoses were performed in a regular fashion. If any proximal coronary anastomoses are required, they should be performed in cardiac arrest without additional clamping of the aorta to prevent damaging of the sutureless prosthesis.

The primary end-points of this study were 30-day mortality and device success, evaluated via echocardiography. The secondary end-point was the development of any postoperative adverse events defined by the Valve Academic Research Consortium (VARC-2) (7). Patients presenting with logistic EuroSCORE >20% were defined as high-risk patients.

The data were analyzed using IBM SPSS Version 27 (IBM Corporation, Chicago, IL, USA). We used the Shapiro-Wilk test to assess normality of the data. Quantitative data are expressed as the mean and standard deviation (SD) or median and interquartile range (IQR), according to distribution. Categorical data are expressed as frequency and percentage. 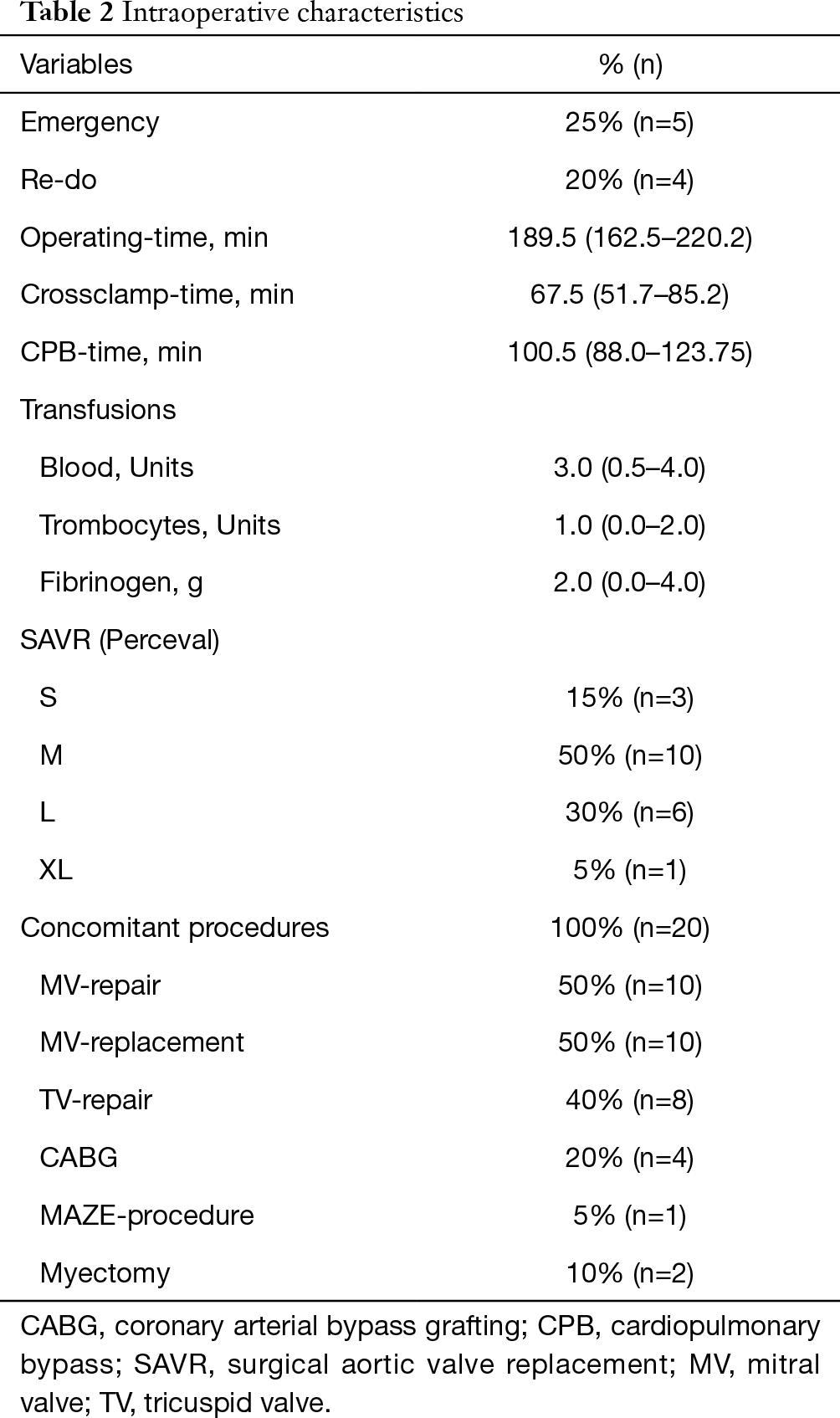 Postoperative outcomes are listed in Table 3. In 20 patients (100%), optimal device success of the sutureless aortic valve prosthesis was achieved. One patient died in tabula following atrioventricular rupture after decalcification of a severe calcified mitral valve, another patient died at postoperative day 2 because of acute right heart failure. We thus observed a 30-day mortality of 10%. Postoperative mean and peak gradients after SU-AVR implantation were 5.7±1.9 and 11.7±2.3 mmHg, respectively. We observed no PVL and no postoperative mitral valve regurgitation. One patient suffered from postoperative third-degree atrioventricular block and underwent a permanent pacemaker implantation. We detected no postoperative stroke in our cohort. 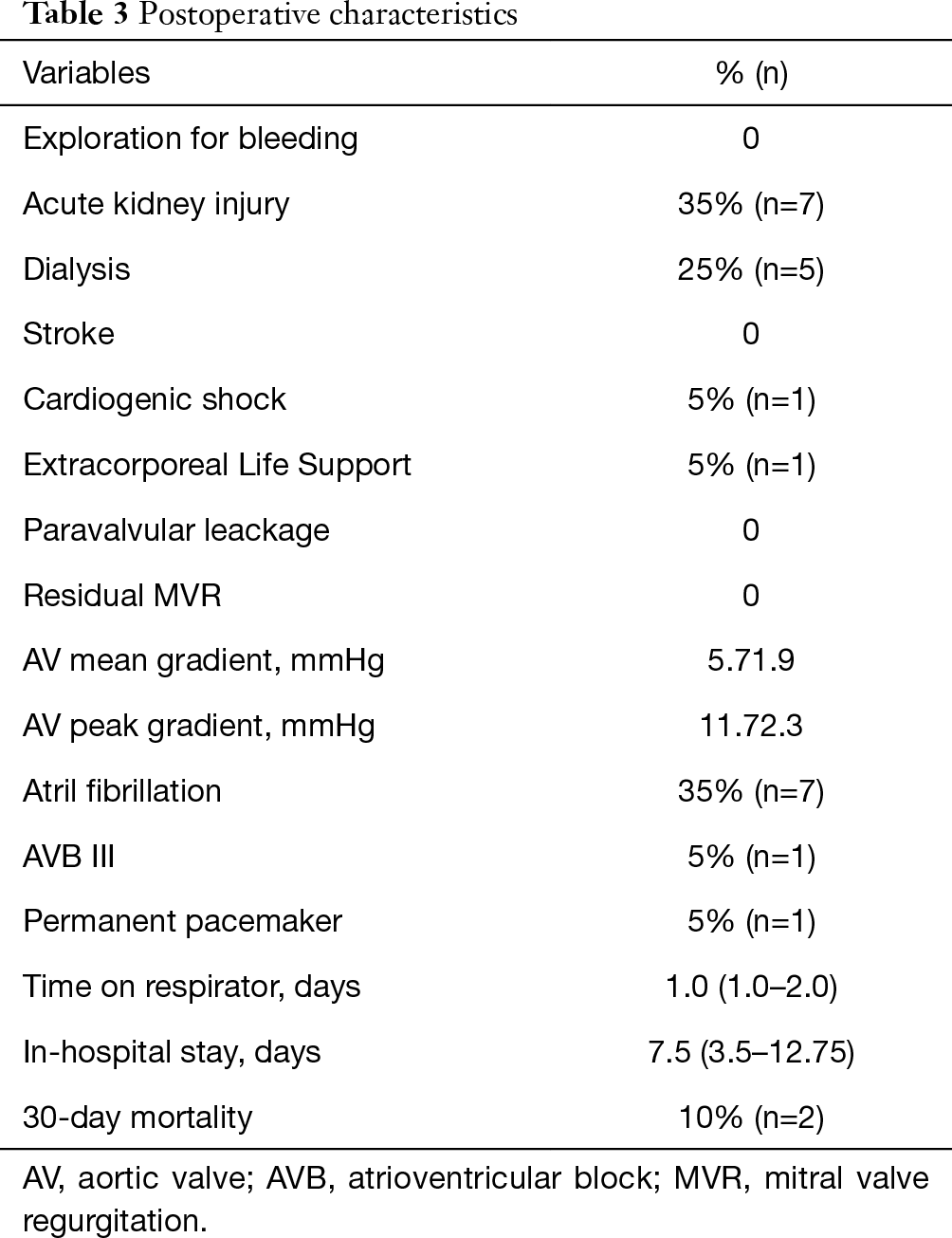 Concomitant significant mitral regurgitation (MR) left untreated at the time of AVR is an important and frequently encountered entity in the transcatheter aortic valve implantation (TAVI) era. Approximately 20% of patients undergoing TAVI present with moderate-to severe MR. The practice of not addressing this pathology has been associated with higher early and late mortality (8). There is still an ongoing debate about the impact of MR on elderly patients undergoing surgical isolated aortic AVR. Barreiro et al. (9) showed that moderate MR is an independent risk factor impacting long-term survival in elderly patients undergoing AVR. Therefore, there should be no hesitation in addressing this pathology in concomitant procedures. This single-center report presents favorable outcomes in patients undergoing SU-AVR and concomitant mitral valve surgery.

Concistrè et al. (14) described a large single-center cohort undergoing SU-AVR in combination with other procedures. They report CPB and aortic cross-clamp times 140±51.5 and 91.5±29.5 minutes, respectively. In our study, we observed CPB and aortic cross-clamp times of 101 (88.0–123) and 67.5 (51.7–85.2) minutes, respectively. The current literature confirms that prolonged CPB and cross-clamp times remain significant determining factors for mediastinal blood loss, ICU and hospital length of stay, and in-hospital mortality (15).

The excellent hemodynamics of sutureless aortic valve prostheses has been previously described by us (2). In this high-risk cohort, despite concomitant mitral valve procedures we observed mean and peak transvalvular gradients of 5.7±1.9 and 11.7±2.3 mmHg, respectively, being even lower than in the previously mentioned study by Concistrè et al. (14). The following can be explained by the extensive experience of the surgical team and appropriate attentiveness during the positioning of both the prostheses in order not to compromise the diameter of the LVOT, and to be able to implant the greatest size sutureless prosthesis possible to prevent postoperative high transvalvular gradients.

In our cohort we did not observe any cases of PVL after SU-AVR. Careful positioning of the prosthesis and proper decalcification of the aortic annulus might prevent postoperative PVL. Concistrè et al. (14) report 0.8% of moderate PVL at discharge, which we consider to be a very low rate, comparable to what observed in our study. The study group also suggests that oversizing of the Perceval prosthesis does not prevent PVL, carrying on the other hand a risk of incomplete expansion with possible invagination of the sutureless prosthesis. Baran et al. (10) reported supra-annular displacement of the sutureless prosthesis in 10% of the patients, which was associated with concomitant mitral valve replacement. PVL could be eliminated in almost all the cases with the redeployment of the valve prosthesis. In our cohort and in our previous experience we did not need to redeploy any sutureless prosthesis, so we suggest that precise positioning and sizing is even more important in multivalve procedures (2).

Disabling stroke is one of the most feared complications of cardiac procedures. In our cohort no patient suffered from any neurological complications, which correlates with the study of Baran et al. (10), who described a stroke rate of 3.3%. Performing proximal CABG anastomoses on the cross-clamped aorta reduces extra manipulations and clamping of the ascending aorta, thus leading to reduced rates of cerebrovascular complications.

Previous studies describing concomitant SU-AVR procedure and mitral valve surgery reported similar 30-day mortality to 1our cohort (5,10,14). In our study with multimorbid patients presenting with a mean logistic EuroSCORE 34.3±24.7 we observed a 30-day mortality of 10%. One patient died in tabula because if the acute left ventricular rupture and another one suffered postoperative right ventricular failure, due to severe pulmonary hypertension.

SU-AVR is a safe and feasible surgical alternative to the conventional SAVR procedure in patients presenting with multiple valvular heart disease. During the operative approach decision making process, SU-AVR should be considered particularly for high-risk patients whose successful operative outcomes might be determined by a reduction in CBP and cross-clamp time. Moreover, patients undergoing complex procedures, where a longer cross-clamp time is expected, should also be taken into consideration for this procedure. SU-AVR provides superb hemodynamic performance with a low risk of PVL and low transvalvular gradients, whilst simplifying the surgical procedure. Extending the indications for SU-AVR towards multiple valvular procedures could significantly benefit the patients. Precise sizing and positioning of the valve prostheses is crucial for the postoperative outcome.

This study is limited by its retrospective, non-randomized singe-center nature and short follow-up time. Unfortunately, there are only few studies with small cohorts which examine this procedure. Further prospective studies on larger cohorts should be conducted to validate the safety and efficiency of this concept.

Reporting Checklist: The authors have completed the STROBE reporting checklist. Available at http://dx.doi.org/10.21037/jtd-21-300

Conflicts of Interest: All authors have completed the ICMJE uniform disclosure form (available at http://dx.doi.org/10.21037/jtd-21-300). Alexander Weymann is working as a proctor for LivaNova. The other authors have no conflicts of interest to declare.

Ethical Statement: The authors are accountable for all aspects of the work in ensuring that questions related to the accuracy or integrity of any part of the work are appropriately investigated and resolved. The study was conducted according to the Declaration of Helsinki (as revised in 2013). The ethical board of our institution approved the study protocol and data gathering and waived the need for individual informed consent (number of ethics approval 20-9738-BO). All patients signed the informed consent on follow-up.