Surgical treatment of locally advanced lung cancer is a major challenge in thoracic surgery. Neoadjuvant therapy has proven to be useful for tumor regression, while increasing surgical resection rates (1). Neoadjuvant chemotherapy combined with immunotherapy is a new treatment model for locally advanced lung cancer, which can not only improve surgical resection rates, but also improves patient prognosis (2,3). Whether difficulties in surgical resection and postoperative complications still increase is worth exploring. We report a patient with locally advanced left lower lobe lung squamous carcinoma (stage IIIA, T2N2M0) who accepted 2 cycles of paclitaxel/carboplatin/pembrolizumab neoadjuvant chemotherapy combined with immunotherapy. We then performed single-direction video-assisted thoracoscopic left lower lobectomy and lymph node dissection, and the surgical procedure is described below. We present the following article in accordance with the CARE reporting checklist (available at http://dx.doi.org/10.21037/jtd-21-529).

A 68-year-old male was admitted to the hospital due to cough and progressive dyspnea for over a month. He had a long history of heavy smoking, with a smoking index over 1,000 pack years. A CT scan indicated a 4.0 cm × 4.0 cm × 3.5 cm mass in the left lower lung hilum. There was also marked enlargement of No. 4L and No. 5 mediastinal lymph nodes as well as No. 10L lymph nodes in the left lung hilum, which is a conglobation that cannot be dissected directly (Figure 1). PET-CT revealed high metabolism in the left lower lung dorsal segment (Figure 2). Moreover, there was lymph node metastasis in the No. 4L and No. 5 mediastinal lymph nodes, closely related to the descending aorta. Bronchoscopy showed a neoplasm in the opening of the dorsal segment of the left lower lung. A biopsy returned a diagnosis of squamous cell carcinoma, and EBUS-TBNA showed that the N0.4L lymph node was squamous cell carcinoma. The clinical stage was T2N2M0 (stage IIIA). No significant abnormalities were observed in other auxiliary examinations before surgery. Lung function was assessed via formal spirometry, with an FEV1 of 1.96L (92% predicted) and MVV 73.17 L/min (102% predicted). After 2 cycles of paclitaxel + carboplatin + pembrolizumab neoadjuvant chemotherapy combined with immunotherapy, chest CT reexamination was performed to evaluate the tumor, which was significantly smaller than before (partial pathologic response, PR). The patient was satisfied with the curative effect and was willing to undergo the operation. Single-direction VATS left lower lobectomy and lymph node dissection were performed 3 weeks after the end of chemotherapy combined with immunotherapy. 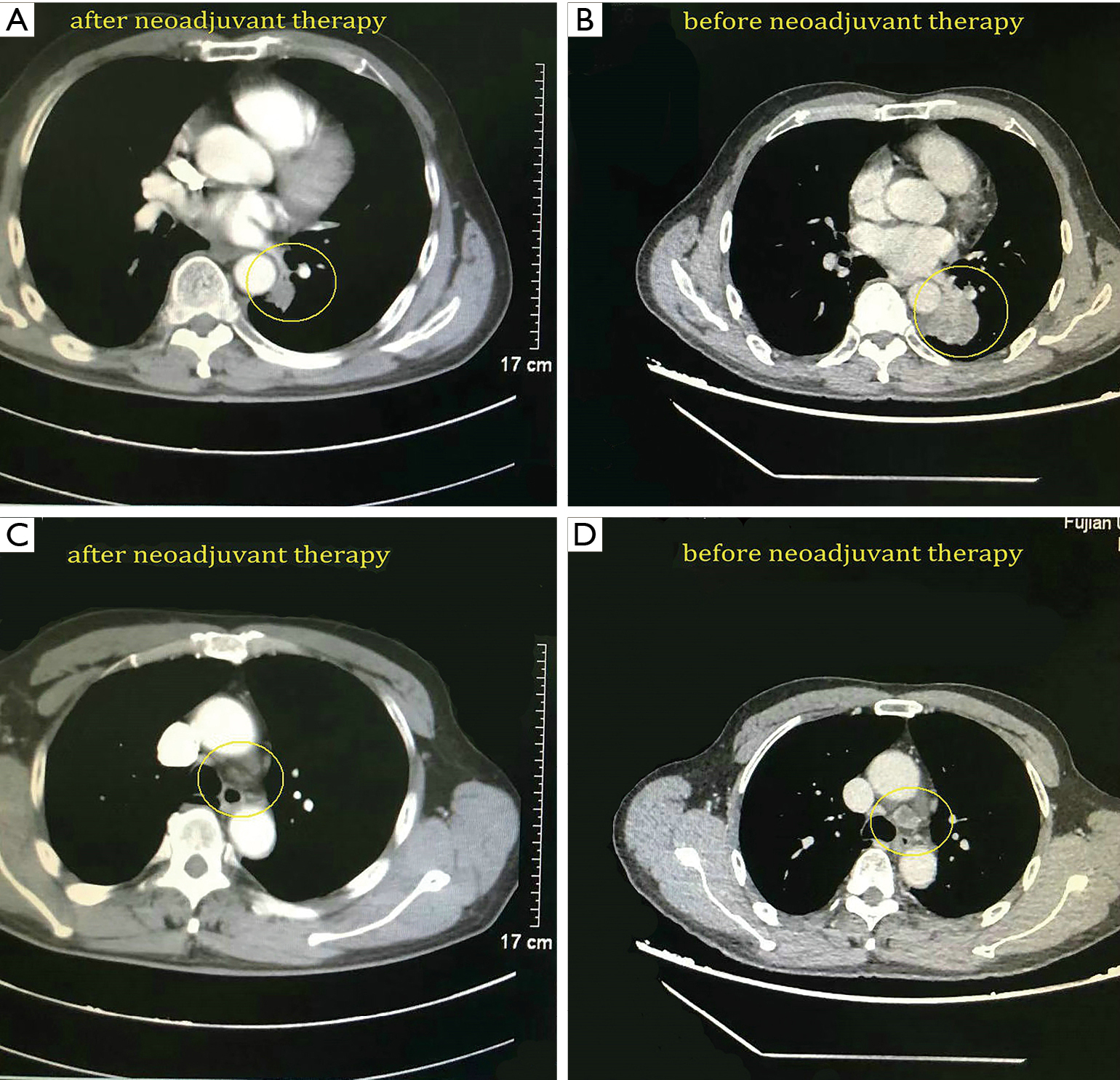 Figure 1 Chest CT after and before neoadjuvant therapy (tumor reduction and phase down). 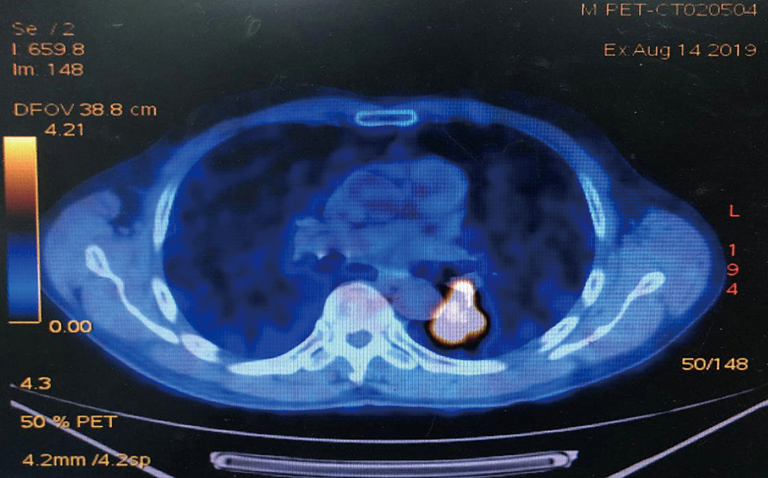 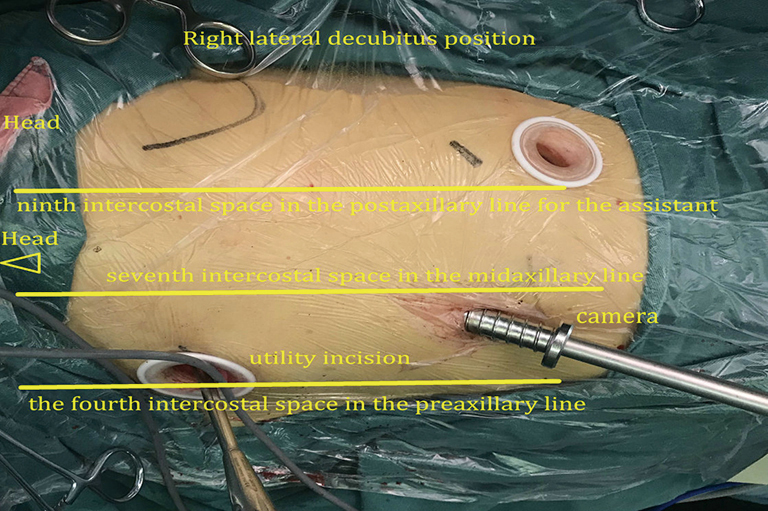 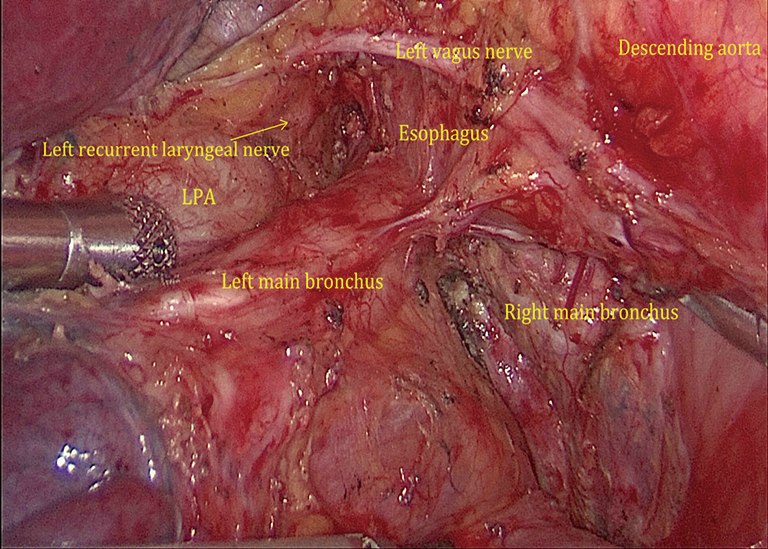 The chest CT examination of the patient on the first day after the operation showed that there was no obvious pneumonia in both lungs, and the lungs expanded well. The drainage tube was removed, and postoperative recovery was good without complications. Postoperative pathology indicated complete pathologic response (pCR) of the left lower lung tumor, and no tumor cells were found in the lesions and lymph nodes. Five days after surgery, the patient was discharged from hospital.

All procedures performed in studies involving human participants were in accordance with the ethical standards of the institutional and/or national research committee(s) and with the Helsinki Declaration (as revised in 2013). Written informed consent was obtained from the patient for publication of this manuscript and any accompanying images.

Neoadjuvant chemotherapy combined with immunotherapy provides a promising surgical model (4,5). However, the perioperative period remains a big challenge. Although neoadjuvant chemotherapy plus immunotherapy helps shrink the tumor and reduces its stage, it also leads to surgical tissue edema and adhesion during surgery. The operation skill and perioperative management of the operator are required to be high. During the operation, special attention should be paid to R0 resection of the tumor and lymph nodes, along with gentle and careful operation, and postoperative attention should be paid to the occurrence of chemotherapy and immune-related complications. If the postoperative pathology of patients can reach major pathologic response (MPR) or pCR, studies show that patients can have longer survival benefits (4,6). In the future, neoadjuvant chemotherapy combined with immunotherapy will be a promising new adjuvant treatment mode for advanced NSCLC.

Reporting Checklist: The authors have completed the CARE reporting checklist. Available at http://dx.doi.org/10.21037/jtd-21-529

Conflicts of Interest: All authors have completed the ICMJE uniform disclosure form (available at http://dx.doi.org/10.21037/jtd-21-529). The authors have no conflicts of interest to declare.

Ethical Statement: The authors are accountable for all aspects of the work in ensuring that questions related to the accuracy or integrity of any part of the work are appropriately investigated and resolved. All procedures performed in studies involving human participants were in accordance with the ethical standards of the institutional and/or national research committee(s) and with the Helsinki Declaration (as revised in 2013). Written informed consent was obtained from the patient for publication of this manuscript and any accompanying images.