Construction, validation and, visualization of a web-based nomogram for predicting the overall survival and cancer-specific survival of leiomyosarcoma patients with lung metastasis

The Tumor Node Metastasis (TNM) classification and staging system is generally considered to be an important tool in the diagnosis and treatment of LMS patients (7). In addition, existing research has shown that the prognosis of LMS patients varies depending on the metastatic organs (8). However, due to the different clinical and pathological characteristics of primary lesions, prognoses often differ, even when they involve the same organ (8). Thus, for patients with distant metastasis, the TNM stage cannot be effectively used to select appropriate clinical treatment options and predict a patient’s prognosis.

Patients were identified in the Surveillance, Epidemiology, and End Results (SEER) database. Specifically, all patients with LMS (ICD-O-3 histologic type: 8890, 8891, 8893, and 8896) were identified. To be eligible to be included in this study, patients had to meet the following inclusive criteria: (I) have a pathological diagnosis of LMS; (II) be aged more than 18 years; (III) have been diagnosed from 2010 to 2016 according to the term “year of diagnosis;” (IV) have lung metastasis; and (V) have completed the follow-up information without loss of data. Conversely, patients were excluded from the study if: (I) important details were missing from their data, including details about grade, TNM stage, tumor size, radiotherapy, chemotherapy, organ metastasis, and/or marital status; and/or (II) details of their follow-up status were missing. The study was conducted in accordance with the Declaration of Helsinki (as revised in 2013). The flow chart for patient selection criteria is shown in Figure 1. As public and anonymous data were used, according to the ethics guidelines, neither informed consent nor approval of an ethics committee was required. 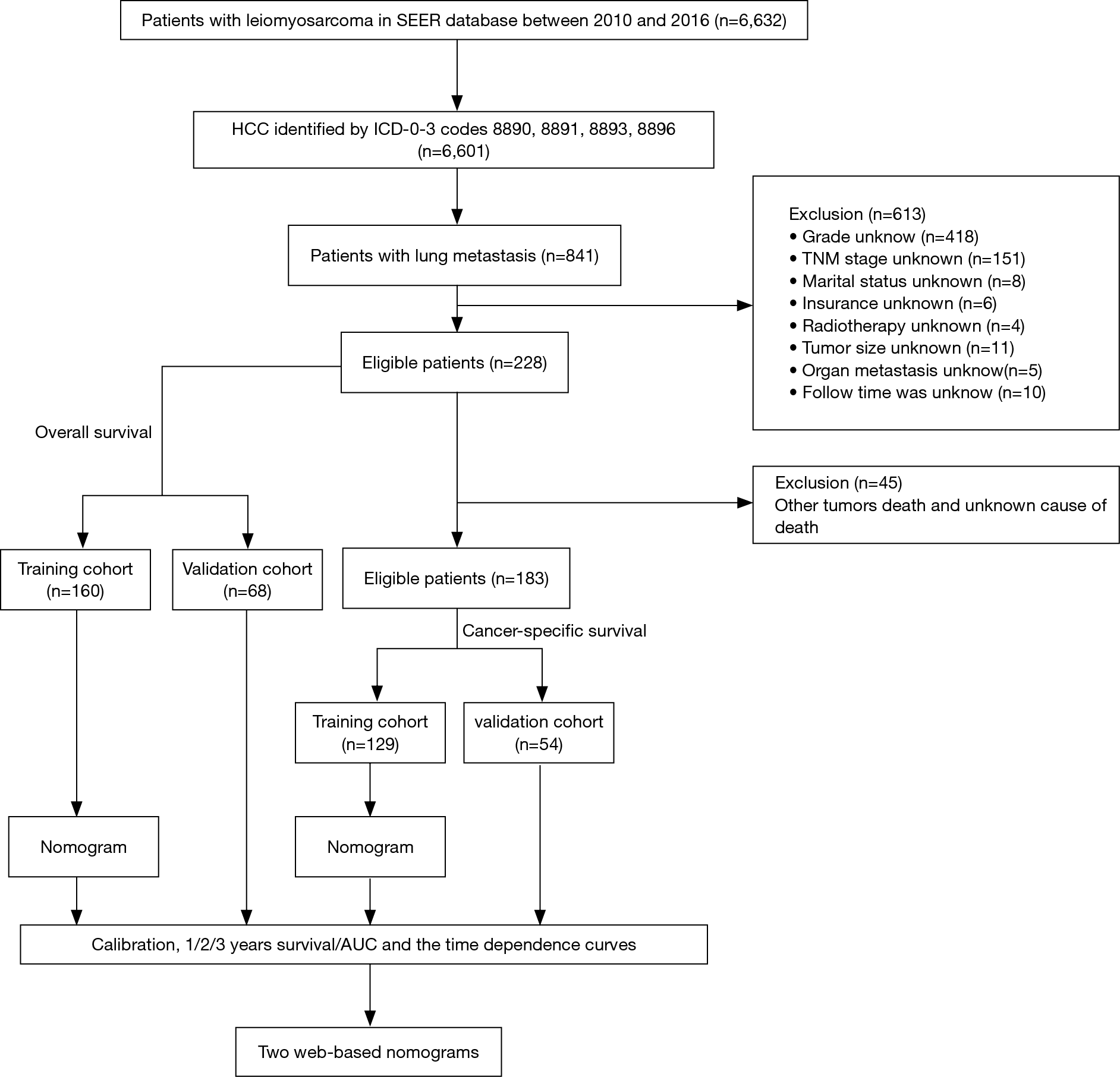 Figure 1 The flow chart of the study design and analysis. AUC, area under the curve.

Data about the following variables were extracted: age (≤55, 56–74 and ≥75 years), sex (female and male), race [White, Black, and Other (American Indian/Alaska Native, Asian/Pacific Islander)], grade (low and high), T stage (T1–T2 and T3–T4), N stage (N0 and N1), surgery (no or yes), radiotherapy (no or yes), chemotherapy (no or yes), tumor size (≤140 and >140 mm), tumor site (uterus, soft tissue and retroperitoneum), metastatic sites, including bone, brain, and liver, marital status (no or yes), and insurance (no or yes). An X-tile analysis provides the best age and tumor size cut-off point, and changes continuous variables into categorical variables (14). OS was defined as the time from diagnosis to death due to any cause. CSS was defined as the time from diagnosis to death because of the cancer. OS and CSS were designated as the 2 endpoints of the study.

Eligible LMS patients with lung metastasis were randomly assigned to the training set (70%), and the remaining patients were assigned to the validation set (30%). A univariate Cox regression analysis was conducted to analyze possible risk factors, and factors with a P value less than 0.1 in the univariate Cox regression analysis were included in the multivariate Cox analysis. Factors with a P value less than 0.05 in the multivariate Cox analysis were regarded as independent predictive factors of OS and CSS. Based on the independent predictive factors, the nomograms of OS and CSS for 1, 2 and 3 years were established by the “rms” package in R software. Receiver operating characteristic (ROC) curves and calibration curves were produced to evaluate the accuracy of the nomograms. Finally, all of the patients were divided into high- and low-risk groups using the “survival” and “survminer” package, and a Kaplan-Meier survival analysis with a log-rank test was performed to verify the prognostic value of nomogram. Finally, 2 web-based nomograms were further prepared based on the nomograms using the “Dynnom” package. 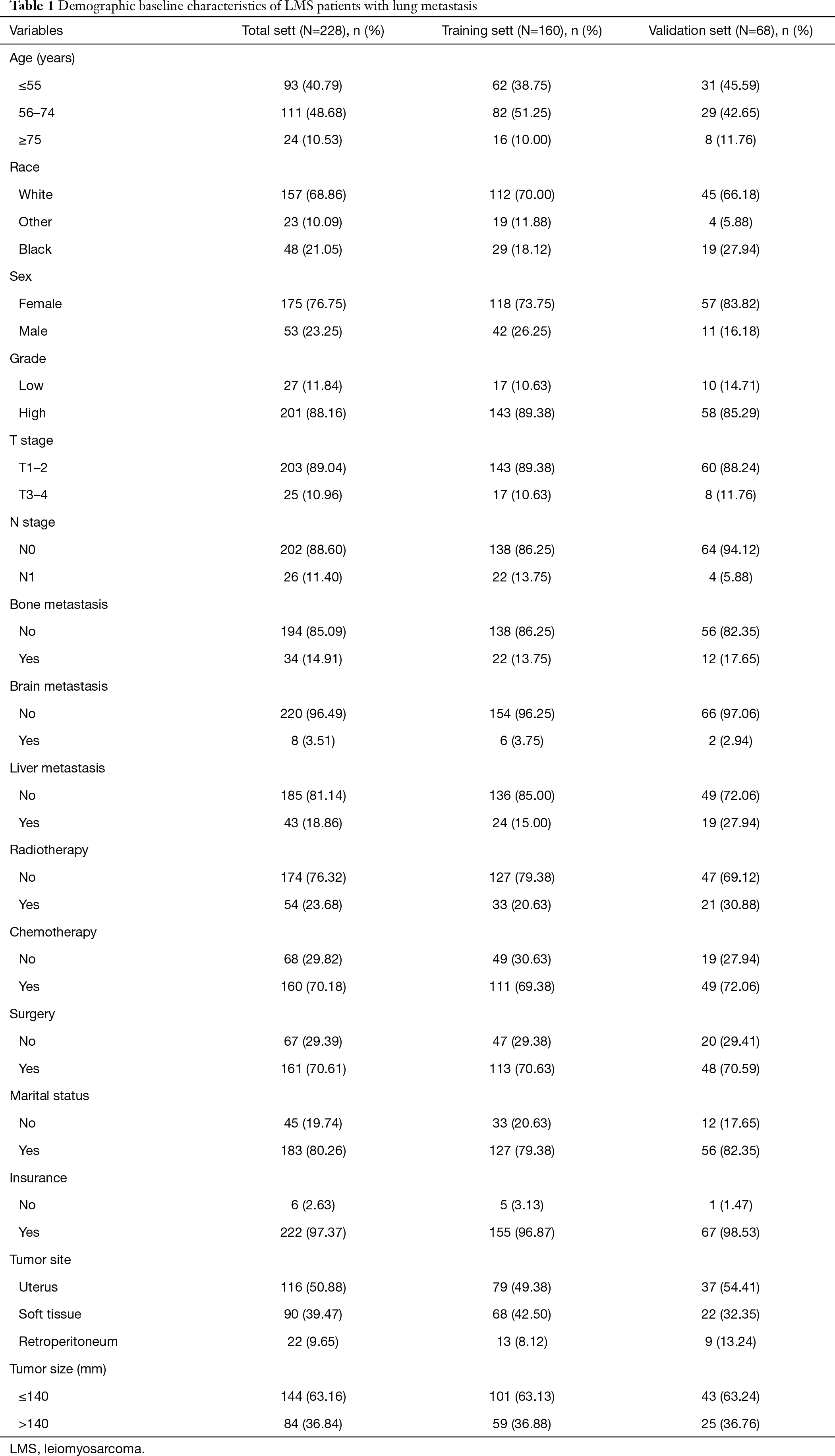 Prognostic factors of OS and CSS 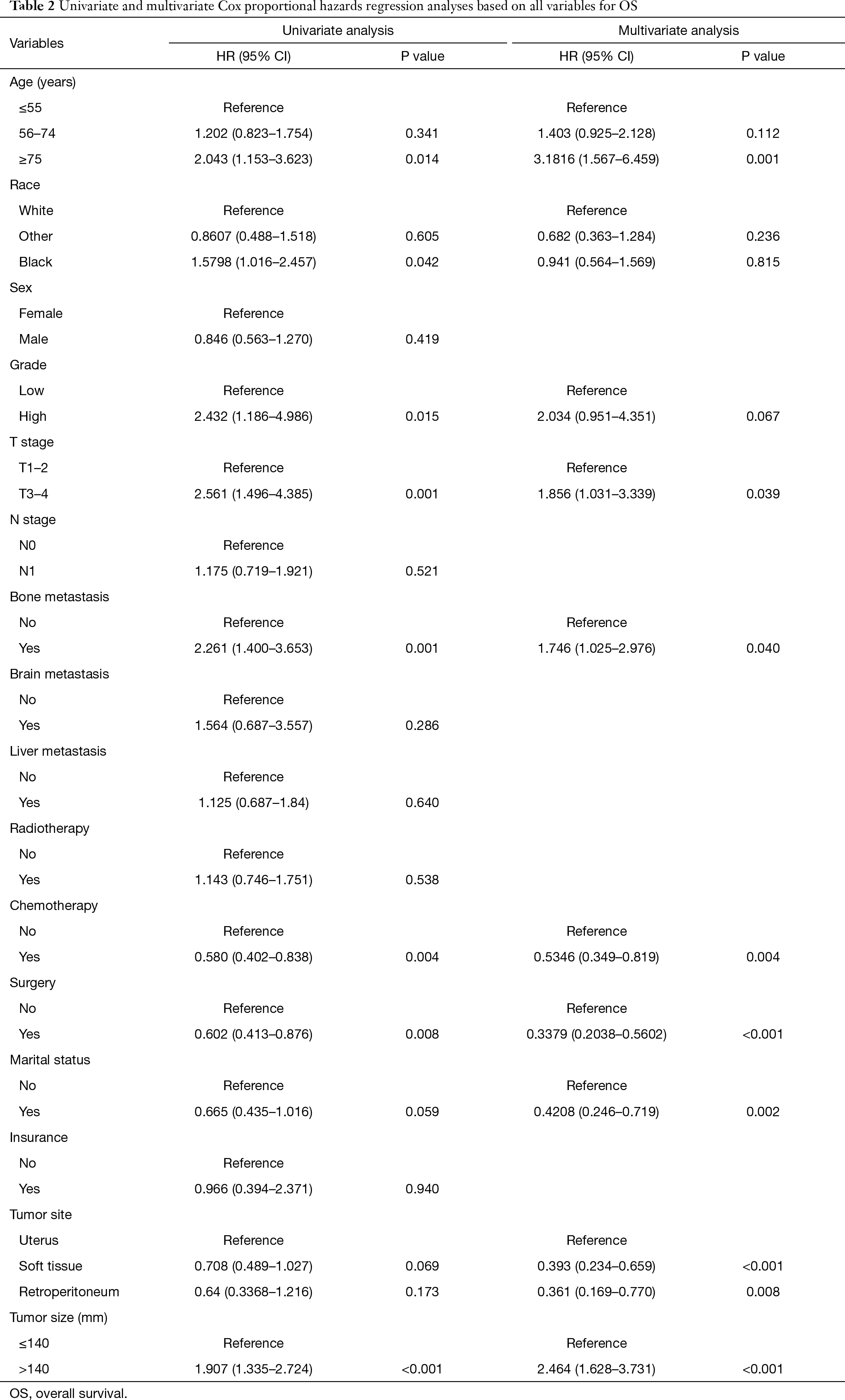 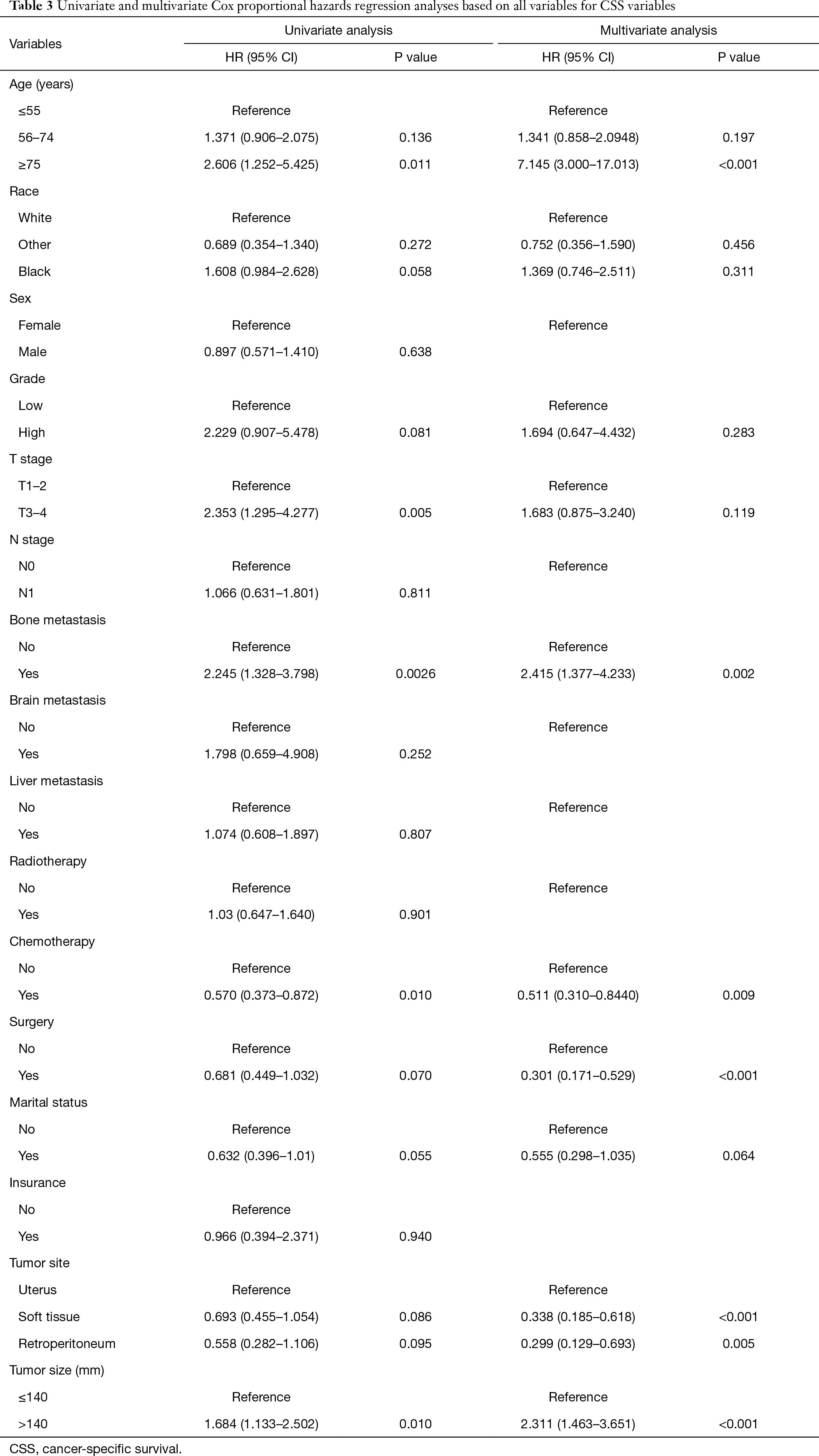 Based on the results of the multivariate Cox analysis, 2 prognostic nomograms were established that included all the significant independent factors of OS (see Figure 2A) and CSS (see Figure 2B). Using these nomograms, the 1-, 2-, 3-year survival probability of each patient can be predicted by adding up the specific numerical value of each predictive variable. 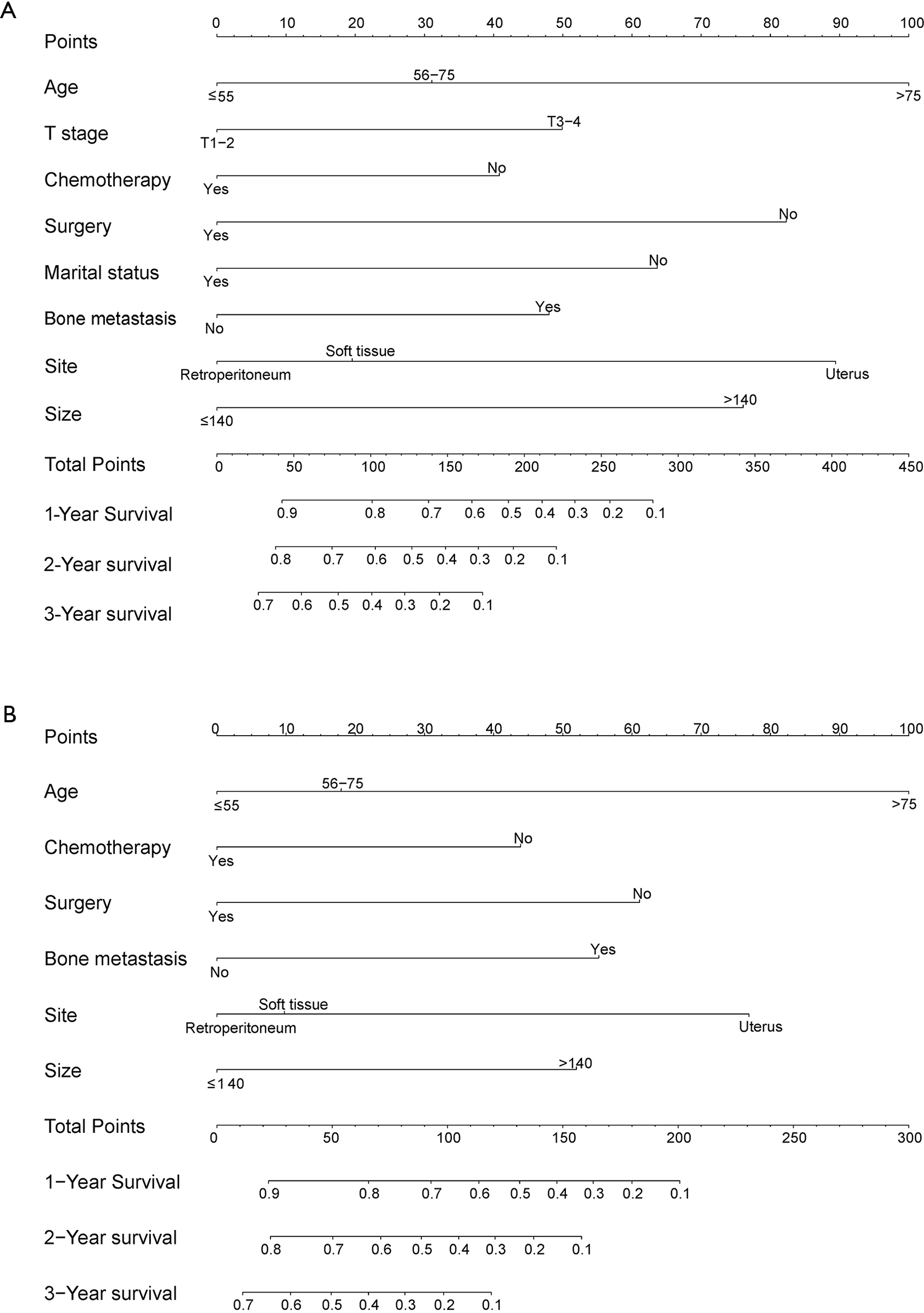 Verification of nomogram in the training set

The ROC shows that the areas under the curve (AUCs; see Figure 3A,B,C) of the nomogram for predicting 1-, 2-, and 3-year OS were 0.790, 0.839, and 0.841, respectively. The AUCs (see Figure 3D,E,F) of the nomogram for predicting 1-, 2-, and 3-year CSS were 0.789, 0.777, and 0.854, respectively. The time dependence curves of OS (see Figure 3G) and CSS (see Figure 3H) performed well, and the AUCs of the OS and CSS independent prognostic factors were significantly lower than those of the nomogram, indicating that the prediction accuracy of the OS and CSS nomograms at 1, 2 and 3 years was better than separate clinicopathological features (see Figures 3A,B,C,D,E,F). The calibration curves for OS (see Figure 4A,B,C) and CSS (see Figure 4D,E,F) showed the best agreement between the observations and the predictions of the survival probabilities. 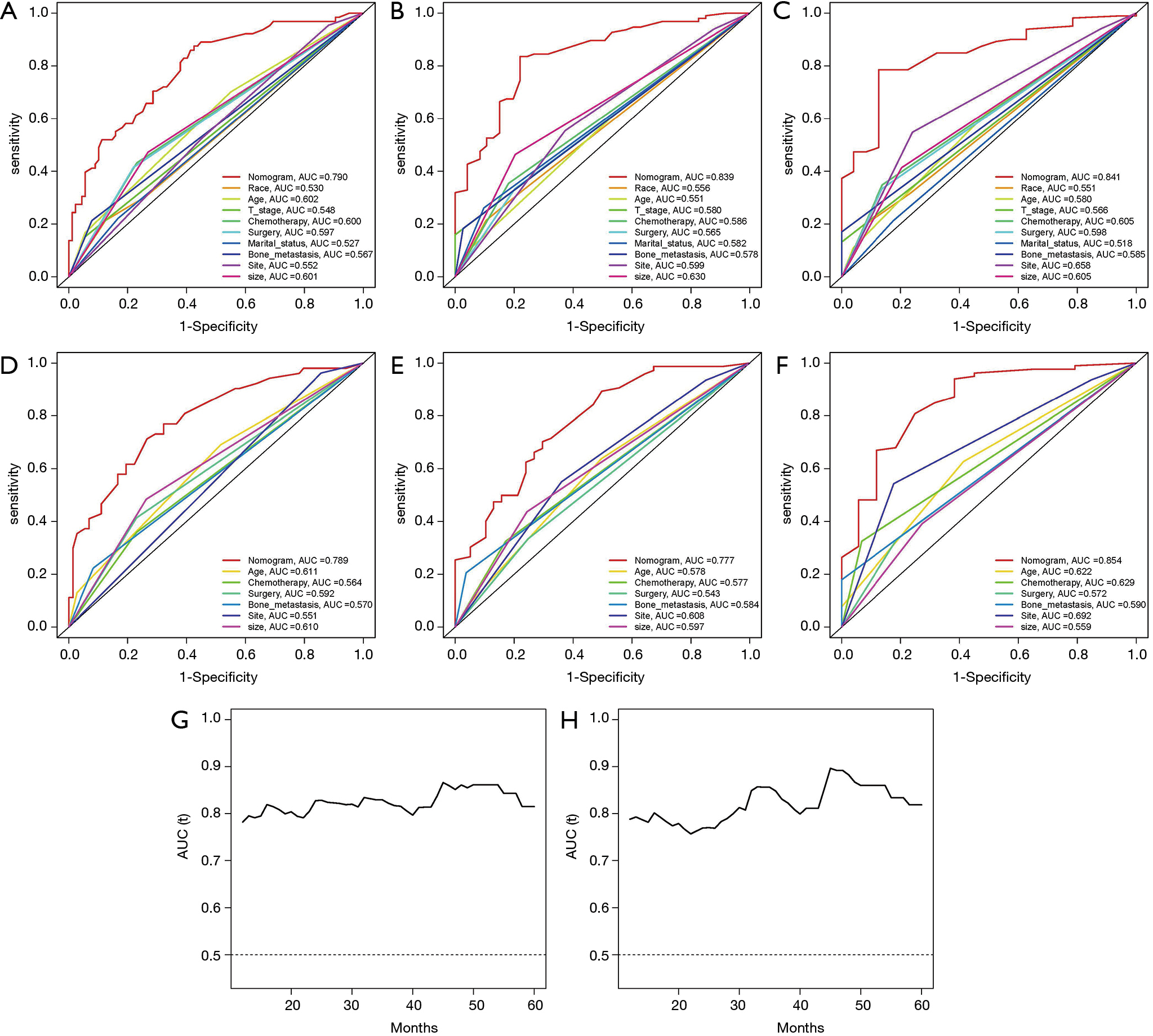 Verification of nomogram in the validation set 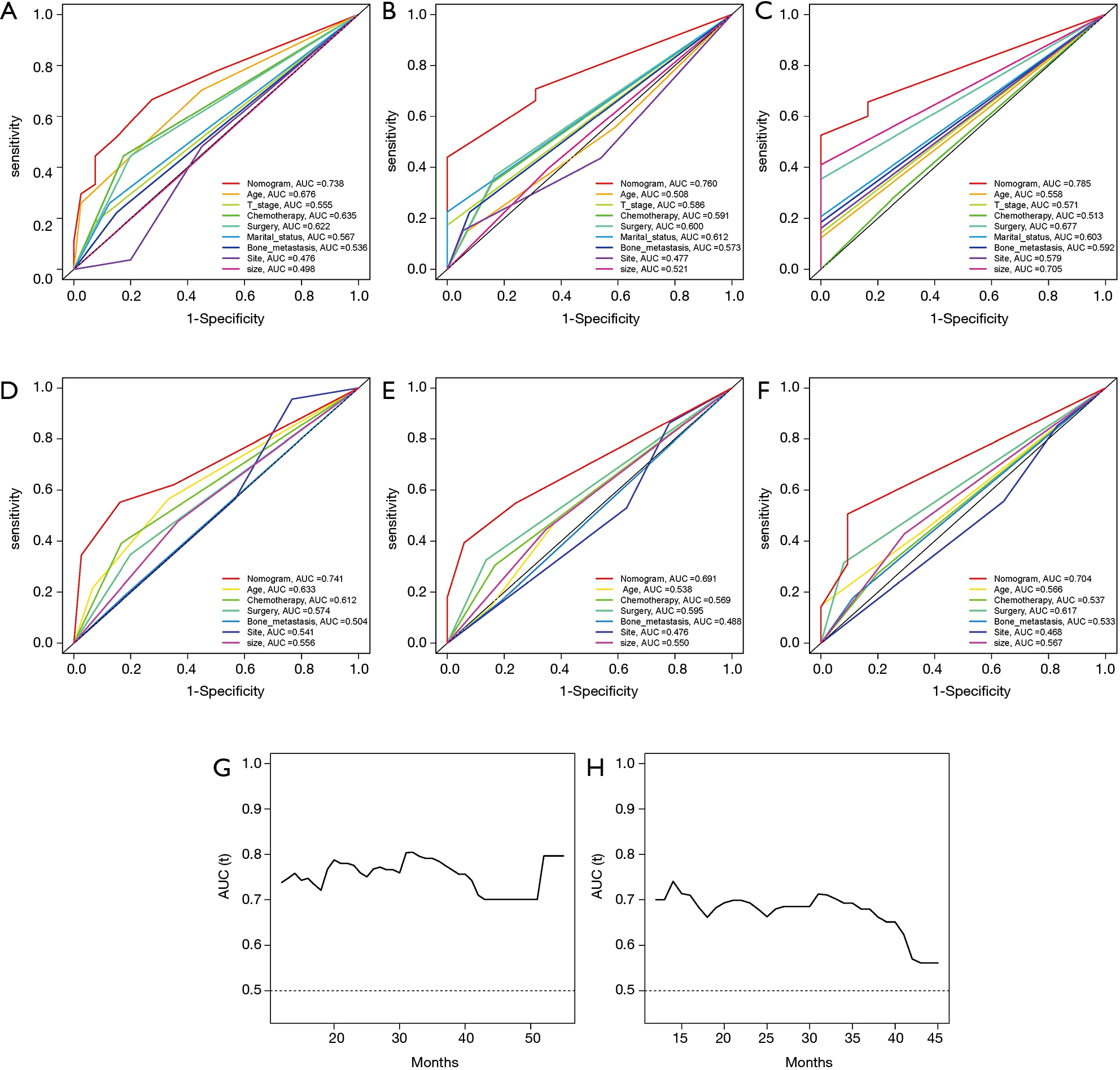 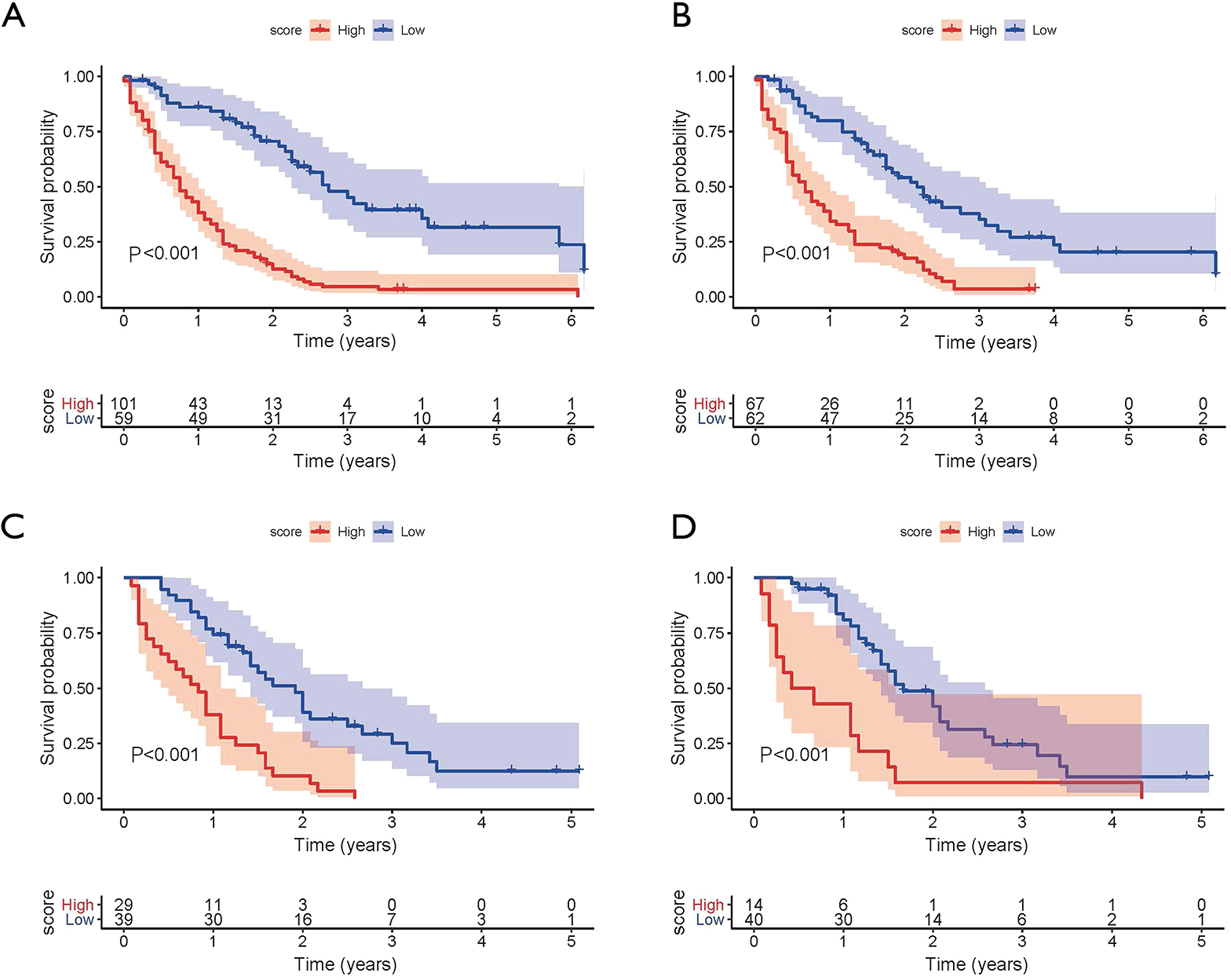 We further visualized the nomogram and created web versions for OS (https://wenn23.shinyapps.io/lmslmosapp/) and CSS (https://wenn23.shinyapps.io/lmslmcssapp/). The survival curve and the probability of the LMS patients with lung metastasis can be displayed by selecting the corresponding clinical features and follow-up time on the left side of the web interface (see Figure 8A). For example, the OS of a LMS patient with lung metastasis whose basic information includes that the patient is 50 years old, has uterine LMS, is married, is in T2 stage, has a tumor 40 mm in size, has not undergone surgery, has not undergone chemotherapy, and has no bone metastasis can be predicted. Figure 8B shows the patient’s survival curve. The 1-year (see Figure 8C, black), 2-year (see Figure 8C, blue), 3-year (see Figure 8C, red) survival probability and 95% confidence interval (CI) can also be seen. Additionally, a specific numerical summary was produced to increase prediction accuracy (see Figure 8D). The CSS of a LMS patient with lung metastasis can be predicted in the same way. 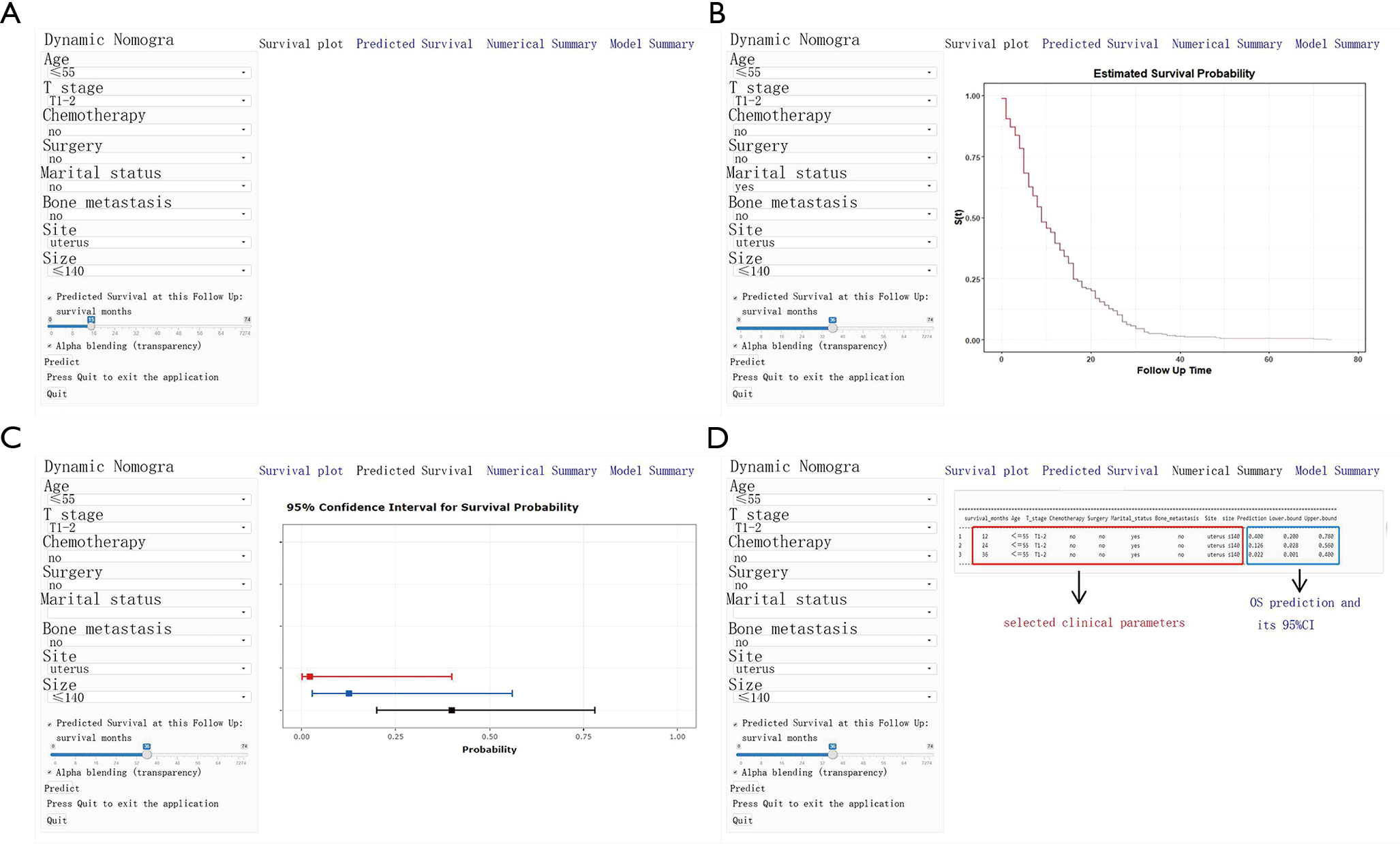 Our nomograms also showed the prognostic effects of different treatment regimens. Appropriate surgery can affect the prognosis of LMS patients with lung metastasis [P value (OS, CSS) <0.01]. Chemotherapy was also found to be a prognostic factor (P value (OS, CSS) <0.05), but radiotherapy was not [P value (OS) =0.538, P value (CSS) =0.901]. Consistent with other research (26), our nomograms predicted higher survival rates in patients who had undergone chemotherapy and surgery. However, risk scores for different treatments are not recommended as a direct basis for treatment selection, as clinical treatments need to be determined based on a variety of factors, including factors related to a patient’s imaging results and condition.

Lamm showed that uterine LMS had a worse prognosis than none-uterine LMS (4). Similarly, we found the patients whose primary site was in the uterus had a worse prognosis than primary site was in soft tissue and retroperitoneum. Previous studies have shown that the reason for the poor prognosis of uterine LMS is related to its late diagnosis, and negative clinical features (27,28). Notably, marital status was also related to the prognosis of LMS patients with lung metastasis, such that unmarried patients had a worse prognosis than married patients. This variable was not examined in previous studies. In our opinion, malignant tumor patients obtain psychological and financial support from their families after marriage, which has survival benefits (29). Previous studies have confirmed that lymph node metastasis (LNM) often results in a poor prognosis for LMS patients (30,31). Our study emphasized that LNM is not a prognostic factor for LMS patients with lung metastasis. The high T grade indicates the poor prognosis. Our study also found that patients’ prognoses were worse when multiple metastases occurred.

In addition to our nomogram not being 100% accurate, our research also had a number of limitations. First, in order to minimize the statistical bias, we adopted strict inclusion and exclusion criteria, and the selected cases were randomly included into training cohort and validation cohort. However, as a retrospective study, statistical bias cannot be avoided. Second, due to the irresistible absence of variables from the SEER database, we only included patients who had been diagnosed with LMS from 2010 to 2016. We believe that a longer time range and larger sample size could help to improve the practicability and accuracy of our model. Third, due to the insufficient number of end events among patients with other histological types in the SEER database, all LMS patients in this study had an ICD-O-3 histological type of 8890. Finally, due to limitations in collecting variables and data, the nomograms only provide a relative reference for clinicians.

We developed, validated, and visualized 2 web-based nomograms (OS: https://wenn23.shinyapps.io/lmslmosapp/) (CSS: https://wenn23.shinyapps.io/lmslmcssapp/) for LMS patient with lung metastasis. Despite some defects, these nomograms have reference value for clinicians and patients. In conclusion, the web-based nomograms showed that the prognosis of LMS patients with lung metastasis correlated with a worse prognosis if the patients were older in age, had a primary tumor larger than 140 mm, had a primary tumor located in the uterus, had bone metastasis, and had not undergone surgery or chemotherapy.

We are very grateful for the contributions of the SEER database, and the 18 registration agencies that provide information on cancer research. We would also like to thank all of our colleagues who were involved in this study.

Reporting Checklist: The authors have completed the TRIPOD reporting checklist. Available at http://dx.doi.org/10.21037/jtd-21-598

Conflicts of Interest: All authors have completed the ICMJE uniform disclosure form (available at http://dx.doi.org/10.21037/jtd-21-598). The authors have no conflicts of interest to declare.

Ethical Statement: The authors are accountable for all aspects of the work in ensuring that questions related to the accuracy or integrity of any part of the work are appropriately investigated and resolved. The study was conducted in accordance with the Declaration of Helsinki (as revised in 2013). As public and anonymous data were used, according to the ethics guidelines, neither informed consent nor approval of an ethics committee was required.