Initial rapidity of tumor growth as a prognostic factor for the therapeutic effect of immune-checkpoint inhibitors in patients with non-small cell lung cancer: evaluation for linear and non-linear correlation

Lung cancer is the leading cause of cancer-related death, and its prevalence is increasing worldwide. The prevalence of tracheal, bronchus, and lung cancer increased by 28% from 2006 to 2016; 1.7 million patients died in 2016 (1). Lung cancer is frequently detected in an already advanced stage; therefore, most patients have no choice but chemotherapy as the primary therapy. Unfortunately, the prognosis of lung cancer patients with distant metastasis is devastating, and their median overall survival at our hospital was 9.5 months (2).

Docetaxel has hitherto been the standard second-line chemotherapy (3); however, CheckMate-017 and CheckMate-057 revealed that nivolumab, the first-released immune-checkpoint inhibitor (ICI), prolonged the overall survival compared with docetaxel (4,5). Afterward, pembrolizumab was approved as the first-line therapy against non-small cell lung cancer (NSCLC) with programmed death-ligand 1 (PD-L1) expression of 50% or higher (6). However, at present, ICIs in combination with cytotoxic chemotherapies have been approved as the first-line treatment for lung cancer regardless of PD-L1 expression (7,8).

Clinically useful predictors of ICI treatment efficacy are needed. Other biomarkers besides PD-L1 expression rate have also been proposed as candidates. Tumor mutation burden detected by next-generation sequencing has been reported to correlate with ICI treatment efficacy (9); however, its application is clinically limited, and a standard value remains to be set. Microsatellite instability is the first cross-organ biomarker approved by the U.S. Food and Drug Administration (10); however, its clinical efficacy has not been proven for NSCLC. The effectiveness of peripheral blood CD62Llow CD4+T-cells as indicators of therapeutic response to ICIs is examined experimentally (11). At present, more convenient predictors are still necessary. The baseline tumor diameter of more than 101 mm has been shown to predict poor prognosis (12). We anticipated that tumor growth rate, which represents a change of tumor diameter over a period of time, might relate to prognosis with ICI treatment.

We present the following article in accordance with the STROBE reporting checklist (available at https://dx.doi.org/10.21037/jtd-21-774).

All NSCLC patients, who had undergone nivolumab, pembrolizumab, or atezolizumab therapy at Saitama Medical Center, Saitama Medical University from January 1, 2016 to December 31, 2018 were retrospectively enrolled. For measurement of the tumor growth rate during the pre-treatment period and the best response to ICIs, chest computed tomography (CT) needs to be performed at least twice before the start of ICI treatment, and at least once after the treatment. Patients who did not undergo these three chest CT examinations were excluded. Follow-up was continued until December 31, 2020.

Clinical information was retrospectively collected from electronic medical records at Saitama Medical Center. We defined a tumor size as the sum of the diameters of the intrathoracic tumors and the lymph nodes on chest CT images, and an initial tumor size (ITS) was obtained at the first checkup in a previous hospital or clinic, or at Saitama Medical Center. We also defined the initial rapidity of tumor progression (IRP) as the calculated increase in the summed diameter from the time of the first CT scan (initial checkup) to the time of the second CT scan (just before initiation of treatment) divided by the number of days between the two scans. After intrathoracic tumor lesions were detected, lung lesions of 10 mm or more in a major axis and lymph nodes of 15 mm or more in a minor axis were defined as measurable lesions, and the top two largest lesions each in lung lesions and lymph nodes were measured for IRP calculation. For response evaluation, up to 5 lesions including other organ lesions were measured. A specialized physician in respiratory diseases and a data management assistant measured lesions according to the RECIST guideline version 1.1. TTF was defined as an interval from ICI treatment initiation to its withdrawal by an attending physician. We also accumulated their neutrophil counts, lymphocyte counts, the value of C-reactive protein (CRP), and the value of albumin on their first visit, and calculated the initial value of the neutrophil-lymphocyte ratio (NLR) and the CRP-albumin ratio. We examined the correlation of ITS, IRP, the initial NLR and the initial CRP-albumin ratio with TTF to verify the tumor growth rate as a predictor of ICI benefits.

The study was conducted in accordance with the Declaration of Helsinki (as revised in 2013). The study was approved by the ethics board of Saitama Medical Center, Saitama Medical University (application number: 2179) and individual consent for this retrospective analysis was waived.

A total of 73 patients underwent ICI treatment at Saitama Medical Center; however, 18 patients were excluded from this study because of insufficient chest CT information in 17 patients and a different diagnosis of mesothelioma in 1 patient (Figure 1A). 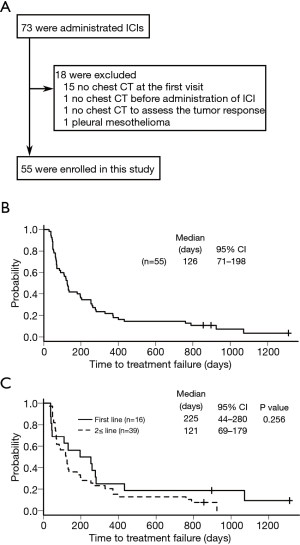 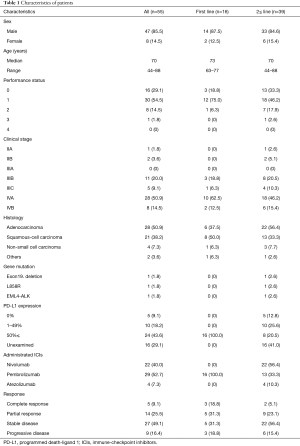 The median interval between the first CT scan at the initial checkup and the second CT scan just before treatment was 44 days (range, 5–1,573 days), and the median IRP during the period was 0.14 mm/days (0.02–2.09 mm/days). Twenty-five patients had extrathoracic metastases before the first treatment, and the median sum of diameters in each metastatic site was the following: the brain (n=10), 18.75 mm (range, 3.7–38.4 mm); the bone (n=12), 26.15 mm (3.5–86.0 mm); the liver (n=2), 20.2 and 25.1 mm; the adrenal gland (n=4), 20.15 mm (17.4–39.4 mm); the extrathoracic lymph node (n=2), 10.2 mm and 34.3 mm; and the muscle (n=1), 8.4 mm. A patient with a 38.4-mm nodule in the cerebellum underwent tumor resection before ICI administration, and recurrence did not occur in the brain during the second-line pembrolizumab treatment. A patient with an 86-mm bulky mass in the ilium underwent radiation therapy, which apparently shrunk the bone mass, leading to osteosclerosis without fluorodeoxyglucose accumulation. While the patient received nivolumab treatment, recurrence did not occur in the bone. 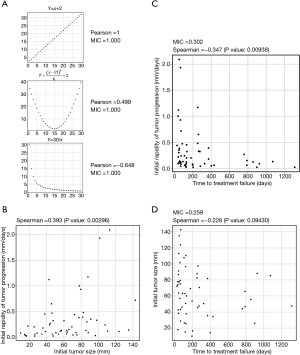 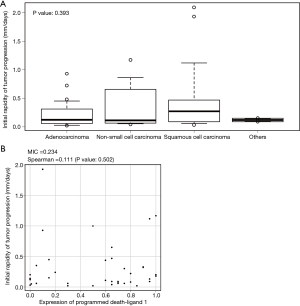 In addition, the initial value of NLR or the CRP-albumin ratio, which has already been reported as a prognostic factor of treatment with ICIs (16,17), was also examined. Although NLR has previously been reported as a negative predictor of ICI therapy, the initial NLR seemed to be positively correlated with TTF on the scatter plot, with MIC, 0.315; however, NLR did not linearly correlate with TTF using Spearman’s rank correlation coefficient, 0.145 (P=0.29000) (Figure 5A). The initial value of CRP-albumin ratio was not correlated with TTF using MIC, 0.260, and Spearman’s rank correlation coefficient, −0.084 (P=0.54300) (Figure 5B). 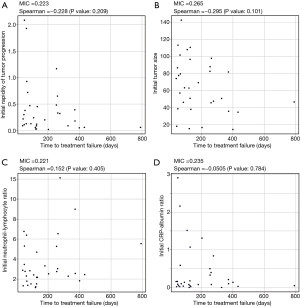 In this research, we evaluated the tumor growth rate, IRP, as a prognostic factor of ICI treatment, comparing it with other previously reported prognostic factors: ITS, initial NLR, and the initial value of CRP-albumin ratio. Because some of these factors might have non-linear correlations with prognosis, we needed to use scatter plots rather than survival curves for estimation; however, at present, there is no standard non-linear correlation coefficient. The correlation of each factor with TTF was evaluated by drawing scatter plots, and MIC, a non-parametric statistic, followed by Spearman’s rank correlation coefficient was calculated. We adopted MIC, as described in the language Python or R, because it has been developed to show the distribution of non-linearly related variables on a scatter plot. Although, at present, no commonly used methods for calculating the correlation of clinical factors have been approved for non-linear distributions, MIC has successfully been applied to genome-wide association studies as a non-parametric statistic (18). In this investigation, MIC showed that there were correlations of the initial NLR, which is an already reported prognostic factor, and IRP with TTF, before we examined whether the correlations were linear.

The scatter plots showed NLR and TTF were positively correlated in ICIs-treated patients, although NLR has recently been reported to be negatively correlated with the effect of ICIs (16). This controversial result is attributed to the lack of accepted measures for evaluating each prognostic predictor of ICIs treatment. Katsurada et al. reported the ITS as a useful predictor (12), but tumor size and the rate of tumor growth are not necessarily linearly correlated, which indicates that time-sequential observation of tumor progression before ICI treatment might be useful. When we examined the rate of tumor growth before ICI treatment, and evaluated its correlation with TTF, MIC proved to be weak; furthermore, Spearman’s rank correlation coefficient supported this correlation more than the correlation with tumor size. In addition, even though previously-reported prognostic factors did not regress linearly on TTF, our study suggested that only the rate of tumor growth had negatively correlated with TTF in a linear manner.

From our results, ICI treatment of acutely progressive tumors is less beneficial; however, our investigation has the following limitations. First, this investigation was a small-scale retrospective study at a designated regional cancer treatment hospital in Japan; therefore, we will set up an independent cohort to validate the results. Secondly, because 4 of 55 patients continued ICI therapy after the end of the follow-up period, the TTF of these patients might blur the results. Since ICIs could give extremely long survival, excluding these patients would result in omitting long-term survivors treated with ICI; therefore, we included their data up to the end of the follow-up in the scatter plot. Thirdly, tumor size and response to ICIs were measured on two-dimensional CT scans according to the RECIST guideline. Three-dimensional measurement may improve the accuracy of the results. Fourthly, 40% of patients received nivolumab; therefore, our results may be affected by the first-released ICI.

The predictors of clinical efficacy of ICIs are yet to be determined owing to the lack of consistent results and differences in procedures between different researchers. Our investigation revealed the correlation between the rate of tumor growth and the therapeutic effect of ICIs using a novel non-parametric test, MIC, and Spearman’s rank correlation coefficient. The MIC score presented a weak correlation between the rate of tumor growth and TTF, and they regressed linearly. This result suggests that the effect of ICIs is less beneficial in tumors with an acutely progressive feature in their inherent properties.

Reporting Checklist: The authors have completed the STROBE reporting checklist. Available at https://dx.doi.org/10.21037/jtd-21-774

Ethical Statement: The authors are accountable for all aspects of the work in ensuring that questions related to the accuracy or integrity of any part of the work are appropriately investigated and resolved. The study was conducted in accordance with the Declaration of Helsinki (as revised in 2013). The study was approved by the ethics board of Saitama Medical Center, Saitama Medical University (application number: 2179) and individual consent for this retrospective analysis was waived.