Since anatomical pulmonary resection for lung cancer by video-assisted thoracoscopic surgery (VATS) was introduced in the 1990s, it has become a popular surgical approach for early-stage lung cancer (1-3). A thoracoscopic approach is mostly used for peripheral tumors, but the use of VATS for central lesions remains controversial. Most patients with bronchial involvement or direct tumor invasion have been considered relatively unsuitable for VATS due to incomplete anatomical resection with a positive resection margin, restricted surgical field because of limited manipulation, and a high probability of hilar or mediastinal lymph node metastasis (4). Moreover, squamous cell carcinoma with a common histological form of central lung cancer is usually accompanied by inflammation of the lung or lymph node. With advanced surgical technology and increased experience, VATS resection has been applied in selected cases of lung cancer with endobronchial lesions. The aim of this study was to evaluate the clinical feasibility and efficacy of VATS anatomical pulmonary resection in patients with central lung cancer.

Between July 2004 and December 2011, 465 patients underwent anatomical pulmonary resection and systematic mediastinal lymph node sampling or dissection for central lung cancer at our hospital: 357 underwent an attempted thoracotomy and 108 patients underwent VATS. Patients who underwent pneumonectomy or a non-anatomic wedge resection were excluded. In 20 of 108 patients who underwent VATS resection, conversion to thoracotomy occurred, due to an anthracofibrotic lymph node (n=6), bronchoplasty (n=4), intraoperative vascular injury (n=3), adhesion to other organs such as pulmonary artery and aorta (n=2), dense pleural adhesion (n=2), difficult manipulation (n=2), and bronchial anomaly (n=1). In our current study series, patients were not randomized to receive VATS.

To compare the surgical outcomes of the 88 patients of the VATS group after the exclusion of any patients who converted to a thoracotomy, we performed a propensity score analysis which can be used to reduce selection bias and potential confounding. The propensity scores were estimated with multiple logistic regressions based on potential confounding variables, including age, sex, histology, tumor size, site of endobronchial lesion, and clinical nodal stage. For the development of the propensity score-matched pairs (1:1 match), the greedy 5-to-1 digit matching algorithm was used. Matching based on propensity scores produced 88 patients in each group for analysis of postoperative outcomes. After propensity score matching, the data of the two groups were compared with the paired t-test or the Wilcoxon signed rank test (Figure 1). 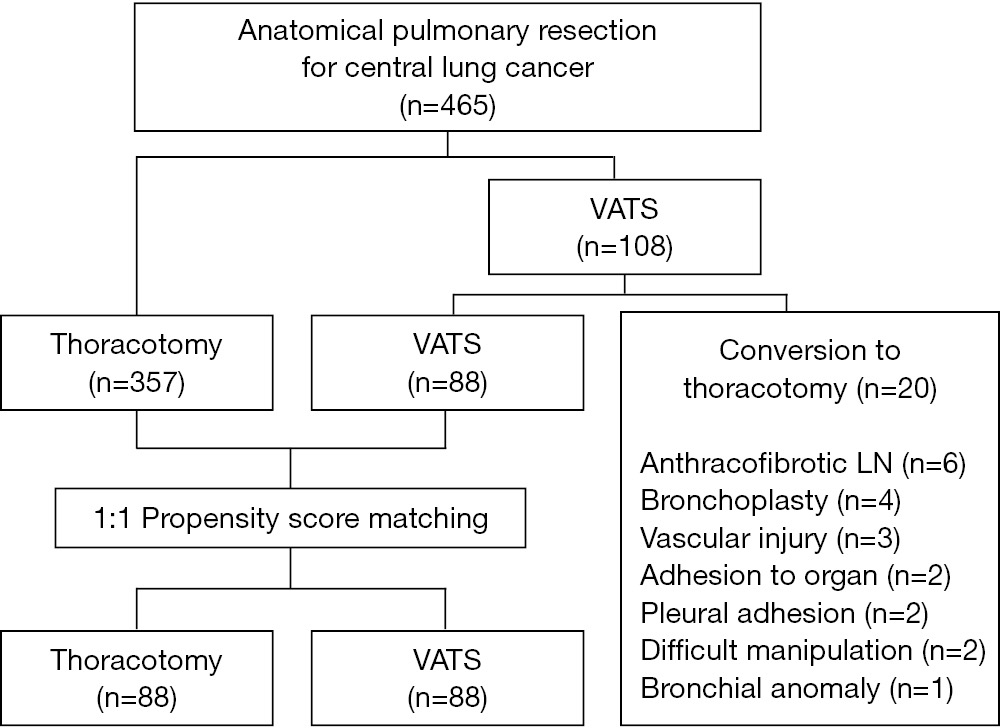 Computed tomography (CT) has been shown to improve the detection rates of peripheral or central lung cancer. However, it has a limitation concerning differentiation between peripheral and central cancer. No standard definition of central and peripheral locations of lung tumors has been employed across different studies. Generally, tumor location is considered to be central when it is located in the inner one-third of the lung field on a CT scan and peripheral when located in the outer two-thirds (5). In our present study, a central lung cancer was defined as a tumor partially or completely visible by bronchoscopy between the orifice of the lobar bronchus and sub-segmental bronchus. Even if a lesion was invisible under bronchoscopic examination, endobronchial stenosis or extrinsic compression on the lobar or segmental bronchus indicated an indirect sign of a central tumor. If no bronchial lesion was detected by bronchoscopy, the tumor was classified as a peripheral lung cancer regardless of whether the cancer is located in a central area on a CT scan.

The preoperative workup included a pulmonary function test, CT scan, and integrated positron emission tomography (PET)-CT scan. Routine mediastinoscopy was not done if the PET-CT scan showed no hypermetabolic mediastinal lymphadenopathy. All lesions were confirmed as cancer by bronchoscopic biopsy or brushing.

Patient characteristics, operative details, and postoperative outcome data were retrospectively analyzed. Operative mortality included death within the first 30 days after surgery or during hospitalization. Postoperative morbidity consisted of complications during hospitalization and after discharge from the hospital. The follow-up period was defined as the time from the operation to the last visit to the outpatient clinic.

All reported P values were two-sided, and a value of P<0.05 was considered statistically significant. The Kaplan-Meier method was used to analyze the duration of recurrence-free survival (RFS) and overall survival (OS) with the log-rank test. SPSS 18 for windows v18.0 (SPSS Inc., Chicago, IL) was used for statistical analyses. 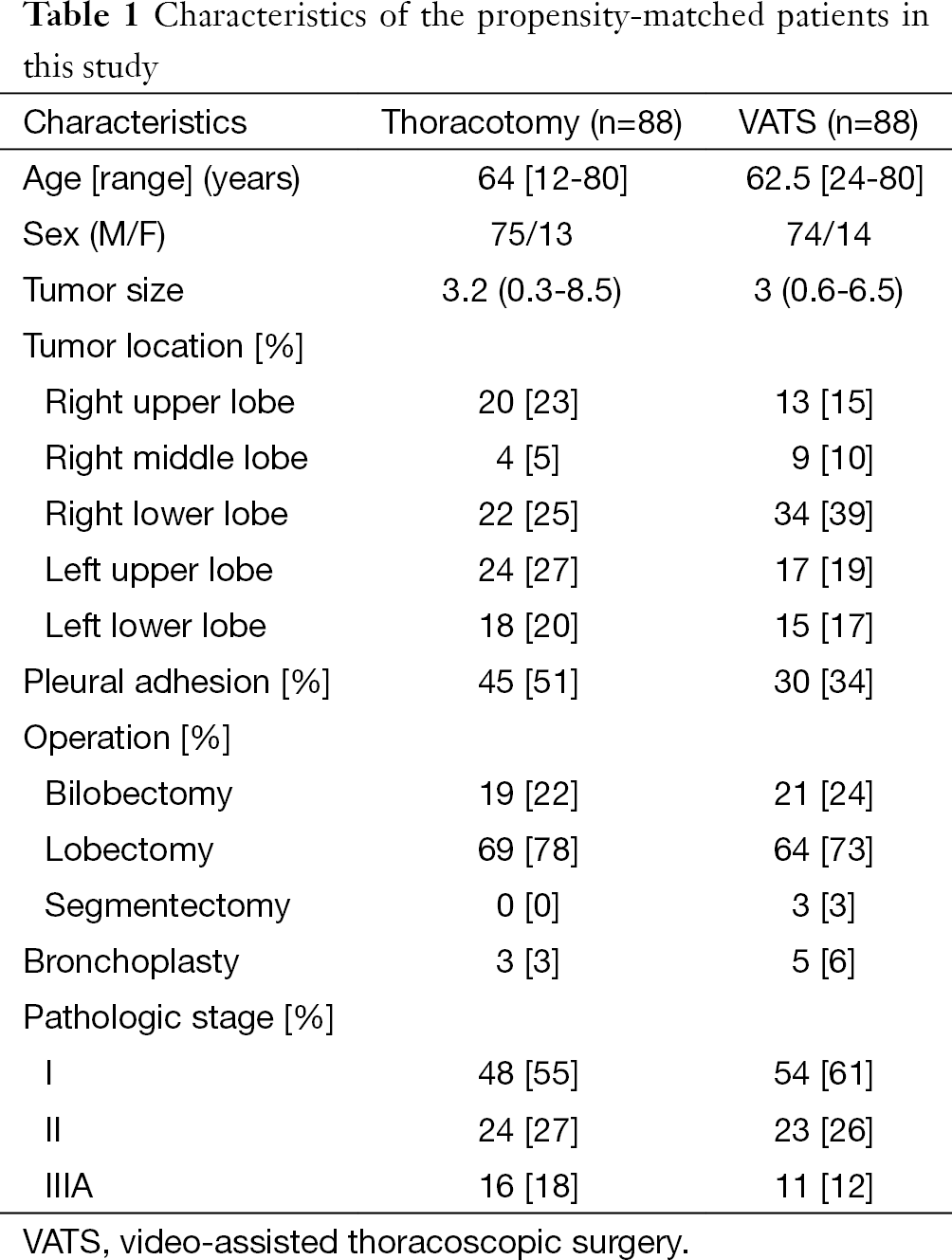 In the two matched groups, there was no in-hospital mortality related to the operation. There were 34 postoperative complications in 30 patients, but there were no significant differences in the postoperative complications between the two groups. Table 2 lists details of the complications in each group. The median hospital stay and chest tube indwelling period of the VATS group were shorter than those of the thoracotomy group by 2 and 1 day, respectively (both P<0.05). During a median follow-up of 32.5 months (range, 0.5-95.8 months), the incidences of local or regional recurrence in the thoracotomy and VATS groups after surgical resection were reported as 7% and 9%, respectively, whereas distant metastasis was reported at 12% in both groups. The overall 3-year survival rate was 79% in the thoracotomy group and 85% in the VATS group (Figure 2). The 3-year RFS was 78.2% in the thoracotomy group and 76.6% in the VATS group (Figure 3). There were no differences between the two groups in the number of patients with 3-year RFS or OS. 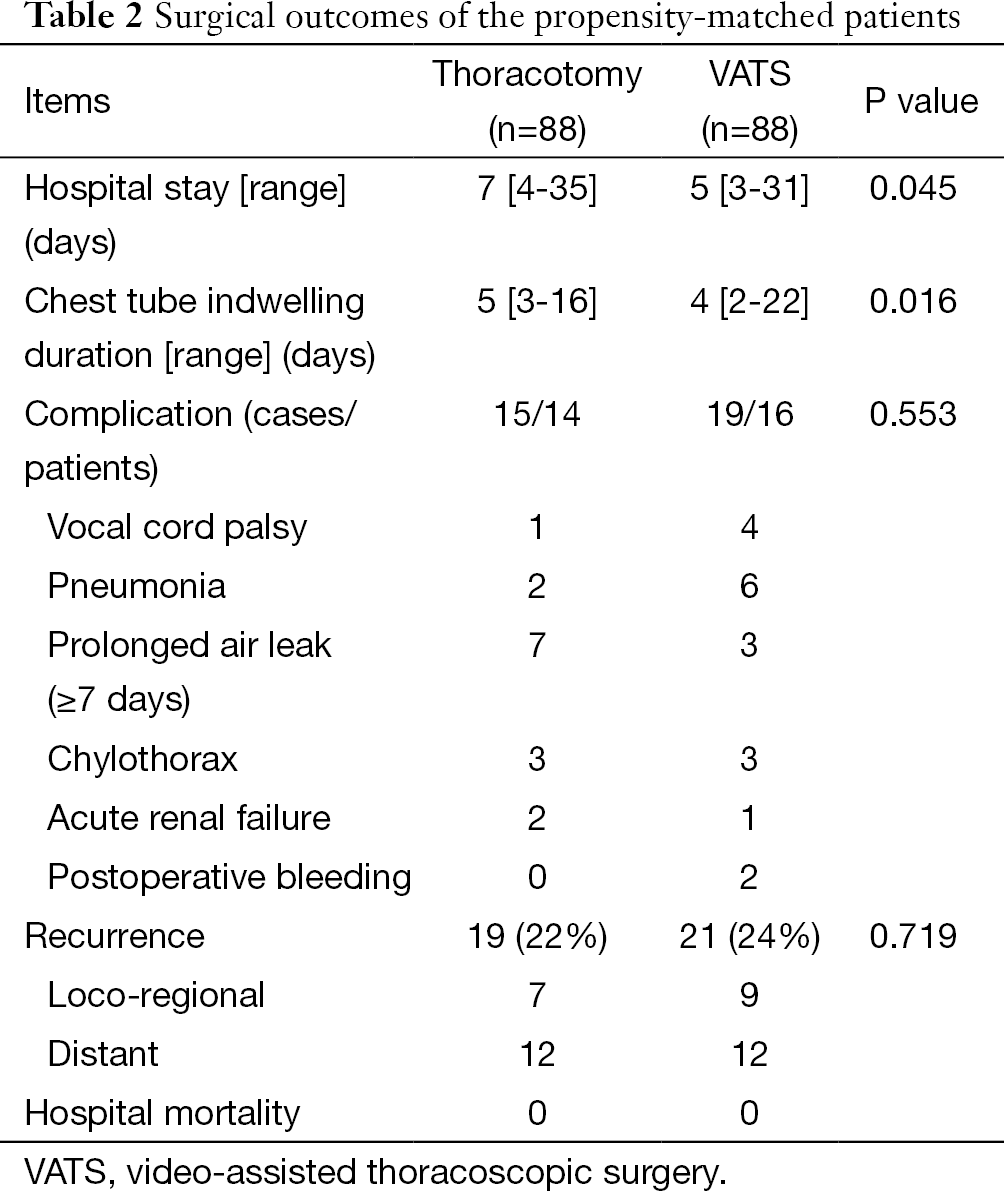 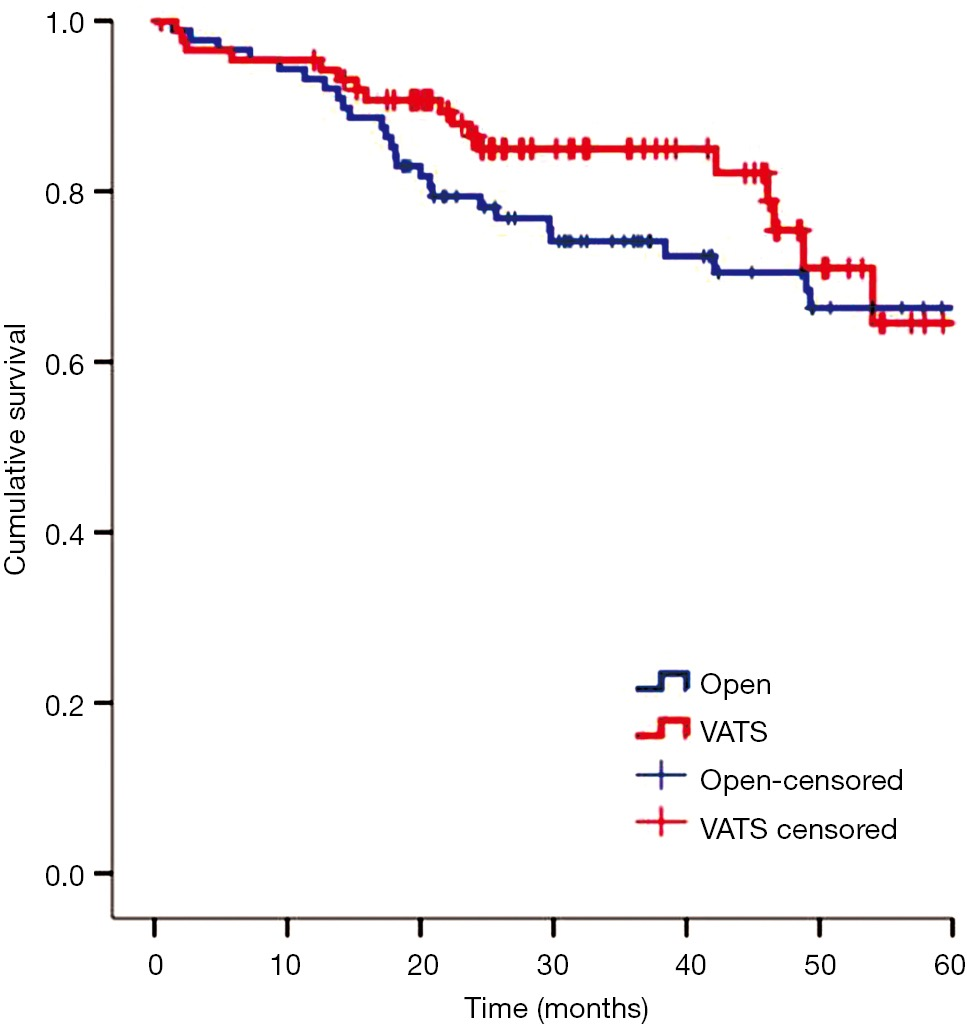 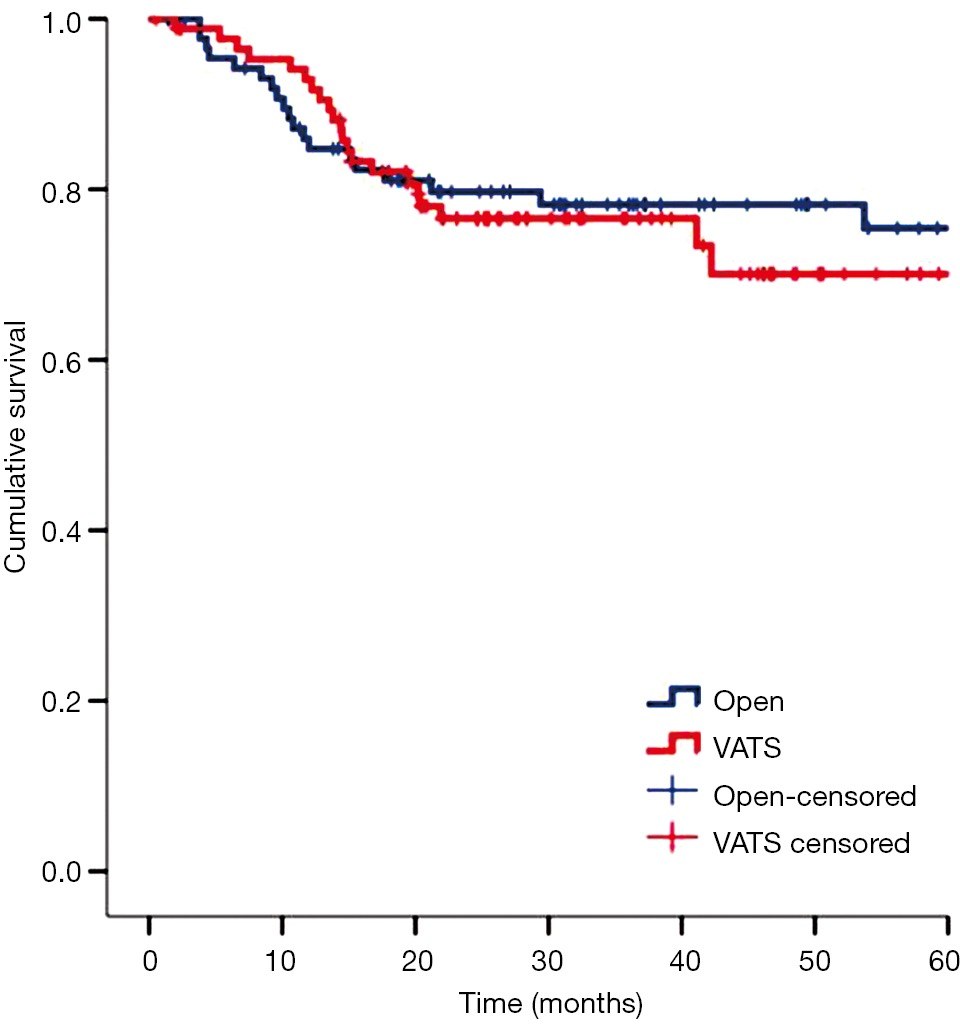 The feasibility of VATS pulmonary resection has been supported by many reports. These studies have emphasized the benefit of VATS in terms of better outcomes, such as less surgical trauma, reduced postoperative pain, fewer complications, and a shorter hospital stay (6-8). Furthermore, a recent meta-analysis on the efficacy of VATS reported it to be a safe alternative to conventional thoracotomy (3). However, its use has been confined to early-stage peripheral lung cancers. As experience with VATS resection gradually accumulates, indications of VATS have been extended to include more complex and locally advanced cancers, including those of the chest wall, diaphragm, or pericardium, as well as bronchoplasty for central tumors (9-12).

Central lung cancers have a high incidence of lymph node metastasis or anthracotic lymph nodes that are adhered to pulmonary vessels. There are several controversial issues specific to the use of VATS for central lung cancer surgery, such as the risk of residual tumors at the resection margin and under-staging due to inadequate lymph node dissection (13,14). With regard to the number of dissected nodes, according to recent studies (15,16), the VATS approach results in a similar or higher total number of lymph nodes removed and a similar percentage of complete resections, indicating that the oncologic surgical principles were maintained. This result was probably due to the accumulated experience with VATS and the introduction of advanced thoracoscopic instruments. A complete oncologic resection mandates a wide surgical margin. Bronchoplasty has been relatively contraindicated because of technical difficulties and oncological concerns in obtaining a complete resection. However, with an increased experience in the VATS technique and proficiency in sewing and tying, these improved skills have been carried over to VATS pulmonary resection needing bronchoplasty (10,11,17). In our institution, nine patients had a positive bronchial resection margin intraoperatively on frozen sections during VATS resection. Among of them, five patients successfully underwent bronchoplasty. All bronchial margins were confirmed to be negative on further pathologically analyzed frozen sections before approximating bronchial anastomosis.

In our present retrospective study, we used propensity score matching of the two groups based on endobronchial lesion location and clinical nodal stage for the valid comparison of two different groups and elimination of possible bias. By using this method, we concluded that comparable operative results could be achieved by VATS anatomical pulmonary resection and conventional thoracotomy. The occurrence of postoperative complications was not different between the two groups. Furthermore, the hospital stay and chest tube indwelling duration were significantly shorter in the VATS group, which could contribute to not only lowering the cost, but also allow patients to resume social activity earlier.

This study has some limitations of note. Although we used propensity matching analysis, our results should be interpreted cautiously because of the existence of selection bias due to the retrospective nature of the investigation. In addition, this study focused only on evaluating the clinical feasibility of VATS anatomical pulmonary resection in patients with central lung cancer. Other variables that can influence the patient survival or disease recurrence, such as preoperative pulmonary function, underlying co-morbidity, and postoperative adjuvant therapy, were not considered for matching. Even though the 3-year OS and RFS of our VATS group were comparable to those of the thoracotomy group in our study, these results should not be considered as only being affected by the different surgical methods. Moreover, because of the relatively short follow-up duration of 3 years, it is difficult to conclude that OS and RFS after VATS resection were truly comparable to those of the thoracotomy group. Nonetheless, the similar loco-regional failure after VATS resection compared with thoracotomy surgery has not called into question its validity as an oncological operation.

In conclusion, we here demonstrate that VATS anatomical pulmonary resection is safe and feasible for central lung cancer, providing a low operative mortality and favorable outcomes in selected patients. Because of the short follow-up period, further case studies with long-term outcome data are necessary to verify our conclusions.