Primary tracheal leiomyoma is a rare benign tumor arising from the smooth muscle cells of the membranous portion of the trachea, which account for approximately 1-2% of all primary tracheal tumors (1,2). Because these lesions are so rare, the optimal management approach has not been defined. Historically, a tracheal sleeve resection has been considered to be the standard treatment. Here, we present a novel robotic minimally invasive technique for performing a non-circumstantial tracheal resection that minimizes the possible operative risk. To our knowledge, it is the first report of robotic-assisted tracheal resection in an elderly female who had experienced recurrence cough and receive a diagnosis of an intra-thoracic tracheal leiomyoma.

A 71-year-old female with cough was referred to our hospital. Computed tomography revealed an intraluminal tracheal mass arising from the membranous portion of the trachea with 5 cm distal to the vocal cords and 4 cm proximal to the carina (Figure 1A). A flexible bronchoscopy demonstrated a wide-based submucosal tumor (Figure 1B). Pathologic examination of the specimen obtained during bronchoscopic biopsy revealed uncharacteristic hyperplasia of squamous epithelium with karyokinesis. On admission, routine laboratory studies including pulmonary function tests were the normal. The management options were outlined to the patient, including regular surveillance bronchoscopy, immediate bronchoscopic local excision or tracheal resection. The patient chose the latter and underwent a robotic-assisted operation.

Figure 1 (A) Coronal computed tomography showed a mass in the intra-thoracic trachea; (B) the flexible bronchoscopy showed the tracheal tumor.

The patient was placed in a left lateral decubitus position and double-lumen intubation was installed. Three-arm robotic system was used (Figure 2). The first port was placed in the seventh inter-costal space on the midaxillary line for the camera (0°). The second port was made in the seventh inter-costal space in the posterior axillary line (one robotic arm), and the third port was made in the fifth inter-costal space in the anterior axillary line for the other robotic arm. An additional small incision, 2 cm long, was made in the third intercostal space in the anterior position just between latissimus dorsi and pectoralis major for the assistant surgeon to insert conventional instrument and was used pulled down lung tissue in order to get good exposure. The dissection of the trachea and other structures were robotically performed with the two arms. No CO2 insufflation was utilized.

Figure 2 (A) The incisions’ distribution for robotic tracheal resection; (B) photograph of the gross pathologic specimen; (C) computed tomography showed no stenosis on 14th day postoperative.

The first action is to retract the lung down by orbicular-ovate grasping forceps via the additional small incision. The azygous vein was transected and clamped with hemlock. Cautious dissection minimized risk of damage to the recurrent laryngeal nerves. The trachea was dissected and the mass of the trachea was completely exposed (Figure 3A). 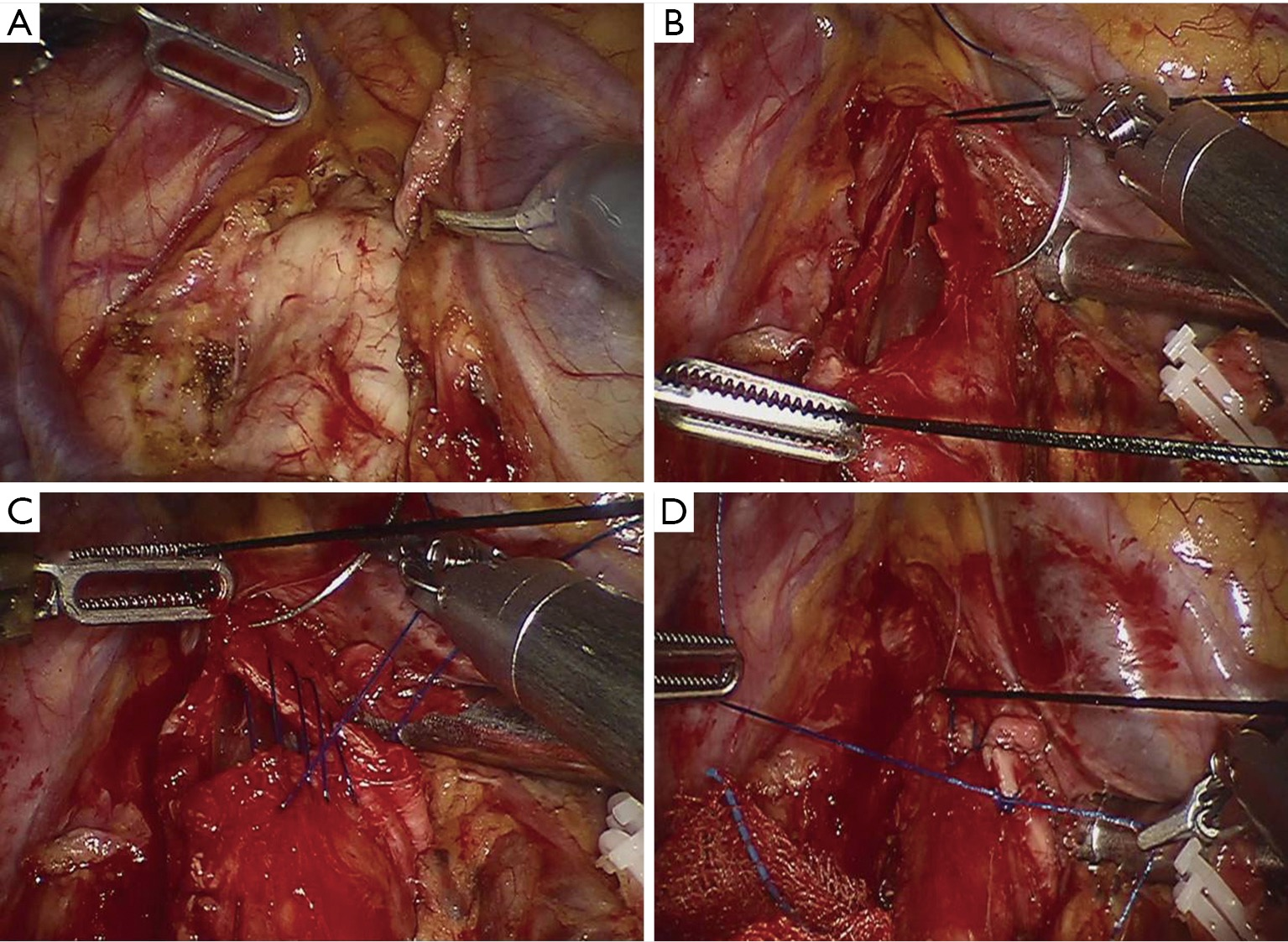 Figure 3 (A) The intra-thoracic trachea was dissected and the mass was exposed; (B) complete excision of the mass and the partial trachea was performed. The area of deletion of the tracheal wall was about 2.5 cm × 2 cm; (C) the cartilaginous portion and the membrane portion of the trachea were sutured with two 2-0 Prolene sutures; (D) the robotic clamp and needle holder were used to tie the suture knots following the anastomosis.

The tracheal wall in the distal and proximal of the mass was firstly sutured for suspension. Complete excision of the mass and the partial trachea was performed (Figure 2B). The area of deletion of the tracheal wall was about 2.5 cm × 2 cm (Figure 3B). Intraoperative frozen examination revealed a benign spindle cell carcinoma with tumor-free surgical margins.

The reconstruction was made by anastomosis with running sutures. The cartilaginous portion and the membrane portion of the trachea were sutured with two 2-0 Prolene sutures (Figure 3C). The robotic clamp and needle holder were used to tie the suture knots following the anastomosis (Figure 3D). The fat flap of anterior mediastinum was used as the coverage of anastomosis because of a light air leakage from the eye of a needle. Two chin stitches were placed in order to get cervical flexion and avoid tension of tracheal anastomosis after operation.

Primary tracheal leiomyomas are very rare tumors and these benign tumors arise from the smooth muscle cells of the membranous portion of the trachea and have the potential to cause tracheal obstruction(3,4). Endotracheal leiomyoma is commonly associated with symptoms, which are manifested as a chronic cough, sputum, dyspnea, stridor, and fever due to obstructive pneumonia (5). Large tracheal tumors can even cause obstruction of the main airway, resulting in symptoms of asphyxia. These conditions are the main reasons for resection of this benign tumor. In our case, the lesion presented as a wide-based soft tissue mass filling the thoracic tracheal lumen.

Bronchoscopic, local surgical excision and partial tracheal resection have all been described. However, in cases of a wide-based tumor, bronchoscopic intervention may result in incomplete resection or recurrence, so surgical resection has still been the standard treatment for these lesions (5). Decisions about the operative strategies for a tracheal tumor should depend on the size, location, width of the base of the lesions, local invasion of the lesion, experience of the surgeon, and diverse accompanying conditions. And benign and low-grade malignant tumors should be resected conservatively with preservation of lung parenchyma (6).

Robotic-assisted surgical technologies have been adopted rapidly since US Food and Drug Administration (FDA) approval in 2000. In the early experience with robotic surgery, studies comparing robotic lobectomy to thoracoscopic lobectomy have found no significant clinical benefit (7). The robotic platform, with its wristed instruments providing articulated movements, is designed to mimic open surgery and facilitates the adoption of minimally invasive techniques. To date, the thoracoscopic or robotic approaches are seldom used to tracheal resection. This is the first report of successful robotic-assisted lateral wall resection of the trachea for leiomyoma. During the operation, by using robotic two-arm, the tracheal resection and anastomosis can be completed easily in a manner similar to the traditional open approach with skills and experience obtained from our previously performing complex robotic thoracic procedures.

In conclusion, we consider that the robotic-assisted surgical procedure described here is simple, feasible, and as effective as the open surgery, with good clinical outcomes and better cosmetic results. This method may present a new alternative strategy for treating benign tumor of the trachea.