Ischemic mitral regurgitation (IMR) is present in 20% to 30% of patients after an acute myocardial infarction (AMI). As the population ages and the survival rate following AMI increases, so will the number of people with IMR (1). Left ventricular (LV) remodeling with LV dilatation and dysfunction lead to annular enlargement, reduction of the force available to close the leaflets, leaflet tethering and restriction of leaflet motion resulting in malcoaptation of absolutely normal leaflets and therefore IMR (2). Laplace’s law (pressure is proportional to wall stress divided by radius of curvature) implies that once IMR is initiated, end-diastolic LV volume and wall stress increase in parallel with preload. The increase in wall stress leads to further LV remodeling, which culminates in a spiraling, self-perpetuating cycle of leaflet tethering (3). Pathophysiological causes of IMR are summarized in Figure 1. 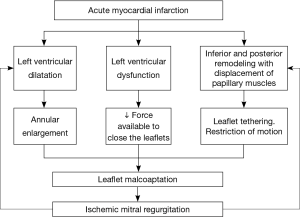 Variable degrees of mitral regurgitation can fluctuate dynamically depending on LV preload, afterload, heart rhythm, ventricular function or residual ischemia (4). For more than two decades, patient survival has proven to be inversely correlated with the grade of MR. Even mild IMR post AMI dramatically increases cardiovascular mortality, with a 17% increase at 3.5 years compared to patients with similar degrees of ischemia but without MR (29% vs. 12%, P<0.001) (5). When IMR is severe, survival can be as low as 60% at 1 year (6). For this reason, surgical community has been looking for ways to mitigate the adverse effects of IMR on medium and long-term survival without paying too much cost in terms of perioperative mortality (7).

When the regurgitation is moderate, debate has centered on the role of associated mitral valve repair versus isolated coronary artery by-pass grafting (CABG) as recently addressed by Smith and colleagues (8). In contrast, when the regurgitation is severe, debate has focused on the choice between mitral valve repair or chordal-preserving mitral valve replacement (7). So, current American guidelines consider mitral valve surgery as IIa recommendation for patients with chronic severe secondary MR undergoing CABG but they do not recommend one technique over the other (9). Moreover, current European guidelines consider surgical intervention for IMR with an ejection fraction (EF) 30% or greater as a class I recommendation or IIb recommendation when the EF is 30% or less (10). Both guidelines give only level of evidence C, which means the decision is based only on retrospective studies, or consensus of opinion of the experts. So, the optimal surgical approach to IMR remains an area of uncertainty. Many authors advocate mitral valve repair because it is associated with improved short-term survival, enhanced preservation of ventricular function, and decreased late thromboembolic complications (1,2,11). Other observational reports suggest that a chordal-preserving mitral valve replacement is superior, citing its lower rates of recurrence (12). Some meta-analysis (1,11) have confirmed both observations. Mitral valve repair gets better perioperative survival but mitral valve replacement achieves lower recurrence of mitral regurgitation.

The cardiothoracic community was expecting the first randomized controlled trial to help clarify this issue. Recently, Goldstein D and colleagues (13) published the 2-year outcomes of this trial which randomized 251 patients with chronic IMR to undergo either mitral-valve repair or chordal sparing replacement with complete preservation of the subvalvular apparatus. The primary end point was the degree of LV reverse remodeling, which was defined as the left ventricular end-systolic volume index (LVESVI). Secondary end points included LV size and function at other time points and rates of death, major adverse cardiac or cerebrovascular events (a composite outcome that included death, stroke, subsequent mitral-valve surgery, heart-failure hospitalization, or an increase in New York Heart Association (NYHA) class by one or more classes), serious adverse events, recurrent mitral regurgitation, and rehospitalization, as well as quality of life. At 2 years follow up, authors conclude that there were no difference with respect to LV reverse remodeling or survival but the rate of recurrence of moderate or severe mitral regurgitation was more than 15 times higher with mitral-valve repair (58.8% vs. 3.8%) resulting in more heart failure—related adverse events and cardiovascular admissions (13).

These results lead to think in mitral valve replacement as the first-choice treatment for severe IMR. Although this study is the first clinical trial on repair versus replacement for severe IMR, which makes it extraordinary valuable, from our point of view there are important limitations which make it impossible to standardize a technique over the other for all patients with this disease.

First, there is a problem regarding the ambiguous language used for the term “IMR”. In the current American guidelines functional or secondary mitral regurgitation occur not only due to completed infarction but also reversible ischemia. So, in this case, mitral regurgitation and ventricular dysfunction may be correctable by revascularization alone and thus, the performance of mitral valve repair or replacement would not matter much (7). However, “IMR” has been defined as that “occurring more than 1 week after myocardial infarction with (I) one or more LV segmental wall motion abnormalities; (II) significant coronary disease in the territory supplying the wall motion abnormality; and (III) structurally normal mitral valve leaflets and chordae tendinae” (7,14). Unfortunately, many studies use the term more loosely, and the authors of this trial (13) did not report if a previous myocardial infarction was a requirement.

This study was not designed to detect clinical outcomes but only echocardiographic parameters. This limitation, recognized by the own authors of this trial (13), makes their conclusion about similar perioperative survival rates invalid. Despite not reaching statistical significant difference, there is a clear difference in perioperative survival favoring mitral valve repair (1.6% vs. 4%) and even both Kaplan-Meyer survival curves are obviously separated within the first year (4).

Complete preservation of the subvalvular apparatus may produce disc interference when using mechanical prostheses; thus, it may be necessary to perform specific techniques which could adversely compromise cross-clamp times. Conversely, biological prostheses do not have this problem, which make them easier to introduce but their life expectancy is limited (15). The authors of this trial (13) did not report the type of implanted prosthesis nor the surgical approach and technique.

The main problem of this trial (4,13) is that their authors have not taken into account this key factor that can accurately predict recurrent mitral regurgitation following a repair. It is well known that both leaflets tethering but with predominant contribution from augmented and progressive posterior leaflet tethering is the key factor to predict recurrent/persistent IMR late after surgical mitral annuloplasty (15,16). This tethering, produced as consequence of LV remodeling, can be quantified by echocardiographic measurements such as interpapillary muscle distance, coaptation depth or LV end diastolic index. For instance, some series (3) have shown that more than 95% of patients with recurrent mitral regurgitation had previously an interpapillary muscle distance of more than 20 mm. In this trial, (13) patients in whom recurrence of mitral regurgitation was expected could undergo a repair and were compared with those patients who underwent a replacement harming the repair group.

Therefore, like a thoughtful surgeon once said: “Conducting a blind, randomized trial in which all patients with ischemic regurgitation were assigned to simple ring repair or replacement is akin to randomly assigning all patients with lung cancer to lobectomy or pneumonectomy, regardless of the stage of disease” (17). The real conclusion of this trial is not something new: If patients are not properly selected, patients do better with a valve replacement rather than a repair. But, is chordal-preserving mitral valve replacement superior to valve repair in appropriately selected patients? Unfortunately, further specific trials are needed to adequately answer this question.