The rapidly ageing population, lower thromboembolic and hemorrhagic risks, and proven increased durability of tissue valves have generated enthusiasm and extended indications of bioprostheses (1). However, bioprostheses have limited durability, with studies reporting expected valve degeneration within 10 to 20 years follow-up. In these cases, patients are indicated for a reoperative valve replacement, with higher risk compared to the first operation (2,3).

Transcatheter valve-in-valve (VIV) implantation for failing aortic bioprostheses has recently emerged as a promising alternative to surgical aortic valve replacement due to degenerated bioprostheses (2,4). However, there are still concerns surrounding short the long-term safety and efficacy of this approach, as well as durability of the VIV implant (2,5-9).

The Preferred Reporting Items for Systematic Reviews and Meta-Analyses PRISMA guidelines were followed for the present systematic review (10,11). Electronic searches were performed using Ovid Medline, PubMed, Cochrane Central Register of Controlled Trials (CCTR), Cochrane Database of Systematic Reviews (CDSR), ACP Journal Club, and Database of Abstracts of Review of Effectiveness (DARE), from their dates of inception to February 2015. To achieve maximum sensitivity of the search strategy, we combined the terms “transcatheter valve replacement” or “transcatheter valve in valve implantation” or “transcatheter heart valves” or “transcatheter aortic valve in valve implantation” which were searched as text words and exploded as MeSH headings where possible. Two authors performed the search independently, and any discrepancies were resolved by discussion. The reference lists of all retrieved articles were reviewed for further identification of potentially relevant studies, assessed using the inclusion and exclusion criteria. Expert academic cardiothoracic surgeons were consulted as to whether they knew of any unpublished data. For redo cAVR outcomes, a recent review (12) was included in the present comparison between VIV and redo cAVR.

Eligible studies for the present systematic review and meta-analysis included those in which patient cohorts underwent transcatheter aortic VIV implantation. Studies that did not include mortality or complications as endpoints were excluded. Studies with fewer than 10 patients in their cohort were also excluded. When institutions published duplicate studies with accumulating numbers of patients or increased lengths of follow-up, only the most complete reports were included for quantitative assessment. All publications were limited to those involving human subjects and in the English language. Abstracts, case reports, conference presentations, editorials, reviews and expert opinions were excluded.

Transcatheter VIV data are presented as mean ± standard deviation. For weighted pooled means, a meta-analysis of proportions was conducted. Firstly, to establish variance of raw proportions, a Freeman-Tukey transformation was applied (14). To incorporate heterogeneity (anticipated among the included studies), transformed proportions were combined using DerSimonian-Laird random effects models (15). Finally the pooled estimates were back-transformed. Heterogeneity was evaluated using Cochran Q and I2 test. Weighted means were calculated by determining the total number of events divided by total sample size.

All analyses were performed using the meta for package for R version 3.02. P values <0.05 were considered statistically significant.

A total of 366 studies were identified through six electronic database searches for VIV studies and from other sources including reference lists (Figure 1). After exclusion of duplicate or irrelevant references, 360 potentially relevant articles were retrieved. A total of 18 relevant VIV studies were identified and included in the present systematic review and meta-analysis (4-9,16-27) (Table 1). Of these, there were 8 prospective studies (5-7,19,21,22,26,27) and 10 retrospective studies (4,8,9,16-18,20,23-25). A total of 823 patients were included for analysis (Table 1). Eight out of 18 included studies reported mean follow-up of 12 months or longer (5,7,16,17,20-22,24). All studies reported 30-day mortality rates. Postoperative mean gradients were reported in all included studies except three studies (9,24,26). Patient-prosthesis mismatch was reported in only three studies (16,17,21). Rates of PVL was reported in eight studies (5,9,16,18,20-22,27). Quality assessment performed according to the Moose Checklist of the Dutch Cochrane review group is shown in Supplementary Table S1. From a prior review on reoperative cAVR (12), 6 studies were included for the present analysis. 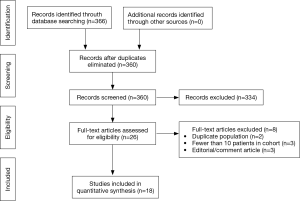 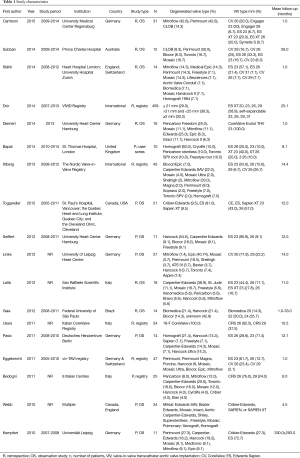 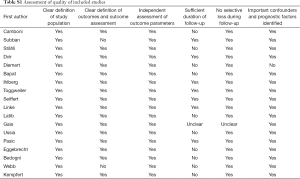 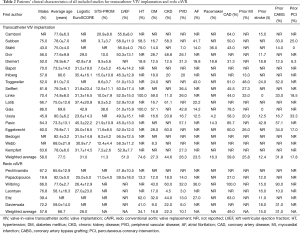 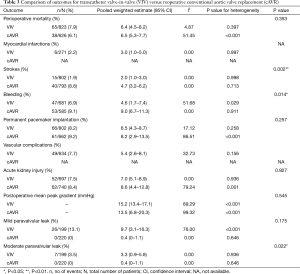 Transcatheter VIV implantation in patients with failing aortic bioprostheses has been recently proposed as an alternative to surgical re-operative aortic valve replacement, particularly in high-risk patients (6,27,28). In order to assess the relative benefits and risks of transcatheter VIV implantation compared with reoperative cAVR, a systematic review and meta-analysis was performed.

This review highlights that transcatheter VIV implantation is currently being prescribed for higher risk patients who are older, have higher rates of comorbidities and cardiac operative risk compared to patients offered reoperative AVR via the conventional open approach. The mean age of the VIV group was more than a decade older than those in the cAVR group (77.5 and 66.7 years, respectively) and more than double the prevalence of hypertension (74.8% vs. 34.1%), peripheral vascular disease (26.3% vs. 10.1%) and chronic kidney disease (44.6% vs. 22.3%). Unsurprisingly, the Logistic EuroSCORE was substantially higher in the VIV group compared to cAVR.

Interestingly, despite the increased prevalence of comorbidities in the VIV cohort, the meta-regression revealed that transcatheter aortic VIV implantation had similar hemodynamic outcomes and perioperative mortality, whilst having a lower incidence of strokes and bleeding compared to cAVR. These findings are somewhat surprising as transcatheter aortic VIV implantation holds equivocal outcomes to the gold standard treatment of cAVR. A likely explanation for this finding is the use of smaller valves in secondary cAVR than those used in primary cAVR that leads to the hemodynamic outcomes that are suboptimal compared to primary cAVR (29), but comparable with VIV. As VIV has a lower incidence of stroke and bleeding compared to secondary cAVR, it suggests that VIV may be the safer option in patients with failing aortic bioprostheses. The surgical approach is associated with more surgical trauma and anaesthetic risks compared to the minimally invasive transcatheter alternative. This improved safety with VIV is likely to be even greater as the patients were of higher risk in the VIV cohort compared to the cAVR cohort. Future studies with more comparable patient groups may be of interest.

It is important to note that some studies have suggested that mortality and complication rates are associated with smaller first implant valve diameter size and baseline stenosis. In 2014, Dvir and colleagues (17) studied 459 transcatheter aortic VIV procedures in an international registry. Patients with smaller valves (≤21 mm) had worse one-year actuarial survival compared to intermediate and large diameter size valves. The Global VIV Registry demonstrated that lower gradients could be achieved in patients with small internal diameter bioprosthesis when a supra-annular TAVI prosthesis was chosen, such as the CoreValve design. To further investigate this, Diemert and colleagues (18) studied 16 high-risk patients with <21 mm first bioprosthesis diameter who underwent VIV with a 23-mm CoreValve Evolut prosthesis, a later generation valve with a lower profile design. Implantation was successful in all but two patients (87.5%), with no postoperative signs of aortic regurgitation, stenosis or major adverse event within 30-day follow-up.

While suturing a conventional prosthesis to the aortic valve annulus undoubtedly remains the most effective technique to minimize the post-operative occurrence of PVL, for transcatheter valve anchoring, the perfectly circular and rigid prosthetic valve stent is more reliable than the native calcified and irregular aortic valve annulus. Moreover, the valvular prosthetic ring prevents post-operative intra-ventricular conduction disturbances by protecting the His bundle from tension and injuries during percutaneous valve deployment.

This study has limitations that need to be considered when interpreting the results. Firstly, the indications for a transcatheter VIV procedure were inherently heterogeneous across studies, which may undermine the validity of the presented data. The VIV procedure can be performed in a wider variety of settings, including degeneration by stenosis subsequent to calcification, pannus, thrombosis, aortic regurgitation, structural degeneration, or a combination of these factors. Given the limited number of studies published to date, subgroup analysis was not feasible in order to determine whether there were any differences in outcomes between these indications. Secondly, there is lack of long-term durability and hemodynamic outcomes for VIV interventions. As such, cAVR should remain the gold standard therapy for reoperative aortic valve surgery, especially for low and intermediate risk patients, until long-term VIV data is available for assessment. Finally, the majority of included studies had a small-sample size with short-term follow-up. Therefore, comparative meta-analysis was performed based on meta-regression analysis, since there were few studies which directly compared outcomes between transcatheter VIV and minimally invasive reoperative AVR cohorts. Large randomised controlled trials to examine long-term outcomes and allow for subgroup analysis according to bioprosthesis valve size and degeneration mechanisms are warranted.

In conclusion, current lower quality evidence suggests that transcatheter VIV implantation may achieve similar haemodynamic outcomes whilst significantly minimising the risk of strokes and bleeding compared to redo cAVR. However VIV was associated with an increased rate of moderate PVL s compared to cAVR. Future randomized studies and prospective registries are essential to examine the long-term effectiveness of transcatheter VIV.