In the 1980s, LTOT significantly improved the survival of patients with COPD and chronic hypoxemia (12,13). In Japan, LTOT has been increasingly prescribed for chronic respiratory diseases including lung cancer (14,15). Patients with advanced lung cancer who receive LTOT are sometimes in relatively good condition owing to their enhanced ability to perform daily activities. However, aggressive chemotherapy in patients receiving LTOT should be carefully considered by physicians because it has been associated with poor outcomes in patients with severe comorbidities (16). To our knowledge, no reports have addressed the use of chemotherapy in patients with advanced lung cancer who require LTOT. The aim of this study was to evaluate the effects of chemotherapy in such patients based on our clinical experience.

This study was approved by the Institutional Review Board of the Osaka Prefectural Medical Center for Respiratory and Allergic Diseases. Because it was a retrospective chart review, informed consent was not required for approval. Written informed consent for chemotherapy was obtained from all eligible patients.

This study included patients with advanced lung cancer who received LTOT while undergoing at least 1 cycle of chemotherapy between January 2009 and December 2014 at our institution. Chemotherapy included cytotoxic agents, EGFR-TKIs, or ALK-TKIs. Patients receiving adjuvant or neoadjuvant chemotherapy were excluded from this study. All study participants were observed until death or April 30, 2015.

Patients with a PaO2 level ≤60 mmHg or a SpO2 level ≤90% at rest or during exercise were indicated for LTOT. Non-hypoxemic patients receiving palliative oxygen therapy were excluded from this study. Oxygen was provided to patients via an oxygen concentrator (Hi-Sanso®, Teijin Pharma Ltd, Japan) and an oxygen cylinder. In patients with an underlying pulmonary disease (e.g., COPD or ILD), maximum medical therapy (e.g., use of bronchodilators or administration of inhaled or oral corticosteroids) was performed before prescribing LTOT. Oxygen rates were reevaluated every month. The first date of LTOT was defined as the date when continuous oxygen therapy was started in an outpatient or inpatient setting.

The clinical history of the eligible patients was retrospectively reviewed. Baseline demographic information including age, sex, smoking status, underlying respiratory disease, histology, disease stage, and Eastern Cooperative Oncology Group performance status (PS) was obtained for each patient. Age and PS were determined at the beginning of the first chemotherapy cycle performed in conjunction with LTOT. Staging was based on the criteria of the seventh edition of the Tumor, Node, and Metastasis classification for lung cancer (17). The components and treatment line of the first chemotherapy regimen with LTOT, and the number of regimens performed with LTOT were also evaluated. Chemotherapy-related severe adverse events (non-hematological toxicity ≥ grade 3 or hematological toxicity ≥ grade 4) were examined during and immediately after the first chemotherapy regimen with LTOT.

Chemotherapy at the end of life

Values are presented as frequency, percentage, or median (range). Survival time was assessed via Kaplan-Meier survival analysis. For survival time with LTOT, differences between survival curves were assessed by using the log-rank test. Variables with a P value <0.05 in a univariate analysis were included in a multivariate analysis using Cox’s regression model to identify independent predictors of survival with LTOT. All analyses were conducted using EZR (Saitama Medical Center, Jichi Medical University, Saitama, Japan), which is the graphical user interface of the R foundation for Statistical Computing (Vienna, Austria). All comparisons with a P value <0.05 were considered statistically significant.

Overall, 40 patients received at least 1 cycle of chemotherapy along with LTOT between January 2009 and December 2014 at our institution. Patient characteristics are summarized in Table 1. The study population had a median age of 69.5 years and mostly consisted of men. Most patients were smokers (n=34) and/or had underlying respiratory diseases including COPD (n=14) and ILD (n=10). Thirty patients had NSCLC, either adenocarcinoma (n=24) or squamous cell carcinoma (n=6), and 10 had small cell lung cancer (SCLC). There was an EGFR mutation in 5 of the 24 patients with adenocarcinomas and an ALK translocation in 2. The disease stage was IIIA in 3 patients, IIIB in 4 patients, IV in 28 patients, and recurrent after surgery in 5 patients. The PS at the beginning of the first chemotherapy cycle with LTOT was 2 in 33 patients and 3 in 7 patients. 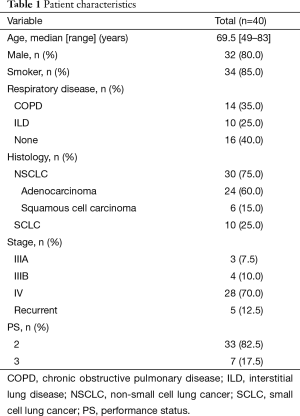 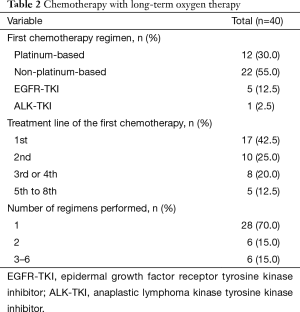 The median survival time from diagnosis was 679 days (95% confidence interval, 327 to 968 days), while median survival time with LTOT was 194 days (95% confidence interval, 112 to 266 days). In univariate analyses of survival time with LTOT, prognosis was better when respiratory disease (COPD or ILD) was present (236 and 134 days with and without respiratory disease, respectively; P=0.046) (Table 3) and when the first chemotherapy regimen with LTOT was the first- or second-line treatment (236 and 111 days for first/second-line and third-line or higher, respectively; P=0.005) (Table 3, Figure 1). None of the other variables (age, sex, histology, stage, PS, and composition of the first chemotherapy regimen with LTOT) were associated with better prognosis. In a multivariate analysis of survival time with LTOT, the only factor significantly associated with better prognosis was the treatment line (first or second) of the first chemotherapy with LTOT (hazard ratio, 0.42; 95% confidence interval, 0.18 to 0.94) (Table 3). 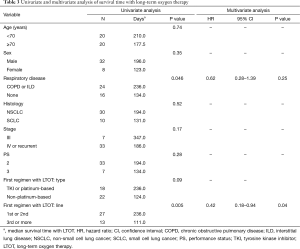 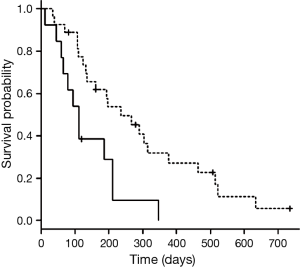 Patients with chronic respiratory failure requiring LTOT are usually ineligible for clinical trials; therefore, there is no standard chemotherapy regimen for these patients. The PS score at the start of chemotherapy with LTOT was 2 or 3 in our study population. Compared with lower values, PS scores ≥2 are associated with lower response rates to chemotherapy, shorter times to treatment failure, and shorter progression-free survival times (18,19). In recent clinical trials of patients with NSCLC with a PS of 2, overall survival ranged from 2.9 to 6.9 months (20-22). In the present study, the median survival time with LTOT was similar (194 days), suggesting that chemotherapy for patients with advanced lung cancer who receive LTOT might be beneficial.

Despite diversity in the tumor types, tumor stages, and chemotherapy regimens of the patients in our study, none of these variables significantly affected survival time with LTOT in univariate analyses. In the multivariate analysis, the treatment line (first or second) of the first chemotherapy with LTOT was the only factor associated with longer survival times. New effective therapeutic agents have been developed, especially for patients with NSCLC (6,7,23). First- and second-line chemotherapy with sufficient evidence of benefits may be acceptable even for advanced lung cancer patients receiving LTOT.

Although the eligible patients in the present study were carefully chosen via multidisciplinary team discussions, it has been reported that medical oncologists tend to overprescribe chemotherapy (24). Interestingly, the administration of chemotherapy to patients with advanced cancer at the end of their lives has increased recently (25,26). Twenty-five percent of the patients in our study received chemotherapy in their last month of life, 2 of whom died of chemotherapy-related adverse events. In the study by Näppä et al. (27), chemotherapy in the last month of life was associated with shorter survival, more hospital admissions, and fewer deaths at home. We did not evaluate quality of life in this study; however, the quality of life in patients receiving chemotherapy at the end of their lives might decline considerably. Consistent with the results of the present study, late-line chemotherapy in NSCLC patients with a poor PS has been shown to be ineffective (28,29). We also found that the final chemotherapy was third-line in 1 of the 2 patients who died of chemotherapy-related adverse events. Chemotherapy should be withheld for advanced lung cancer patients receiving LTOT if it is third-line or greater.

This study had two limitations. First, it was a retrospective single-institution study with a small study population. Second, PaO2 was not routinely checked; therefore, the indication for LTOT might be arbitrary. A prospective multicenter study is needed in the future.

In conclusion, chemotherapy for patients with advanced lung cancer who receive LTOT may be acceptable if it is the first- or second-line treatment. We should be mindful of the potential overuse of chemotherapy and its negative impact on quality of life.