Gender differences in the prevalence of sleep apnea (SA) have been found to be significant, with a reported men-to-women ratio of 2–3:1 (1). To date, epidemiological studies have claimed that this ratio is the same among Europeans and North Americans (2) as it is among Asians (3). In addition, women with SA lack typical symptoms such as snoring and drowsiness; instead, they complain of atypical symptoms such as insomnia, depression, and palpitations (4). Thus, women with SA may have different pathologies from men with SA.

The aim of this study was to clarify gender differences in the clinical features and polysomnographic findings between Japanese men and women with SA.

We initially examined the data of 7,863 patients who underwent diagnostic polysomnography in our sleep center between February 2001 and August 2012. Of the 7,863 patients, 2,697 who underwent split-night polysomnography were excluded. Of the remaining patients, 4,714 patients (4,127 men and 587 women) who have SA with an apnea-hypopnea index (AHI) of ≥5 but who have no heart failure, chronic lung disease, stroke, or renal failure were targeted. In this study, we conducted individual matching to compare the clinical characteristics and polysomnographic parameters between men and women. The matching criteria included age within ±4 years, AHI ±4 events per hour of sleep, and body mass index (BMI) within ±2 kg/m2. To eliminate any potential confounding factors in the clinical features, only Japanese patients were enrolled. We finally evaluated 296 pairs of men and women with SA. The flow diagram of the selection process is shown in Figure 1. 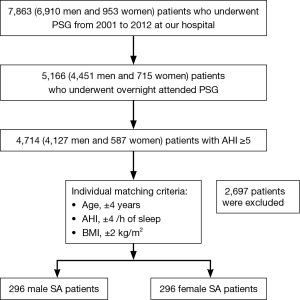 We used the ESS questionnaire which is composed of 8 self-answer questions involving passive or active day-to-day situations, with the patient being asked to answer on a scale of 0 (no chance) to 3 (high chance) what chance he/she would have a nap in each of the situations (6).

Scores >10 suggest a significant daytime sleepiness, and scores ≥15 indicate pathological sleepiness in specific conditions, such as apnea and narcolepsy.

For polysomnography, all signals were recorded by standard techniques on a computerized sleep recording system (SomnoStar α Sleep System; SensorMedics Corp., Yorba Linda, CA). Airflow was detected by a thermocouple and a pressure flow transducer. Chest and abdominal piezoelectric sensors monitored respiratory effort. Recordings were scored following standard scoring rules (update of the 2007 AASM Manual for the Scoring of Sleep and Associated Events) (7). Body position and movements were recorded continuously by video recordings from which technicians scored the time spent in particular positions epoch-by-epoch.

DM was determined on the basis of clear laboratory data or, in borderline cases, confirmation from the patient’s report of having previously been given a diagnosis of DM.

Stroke was defined as brain ischemia due to thrombosis, embolism, or systemic hypoperfusion. IHD was defined as a classic history of angina pectoris and myocardial infarction in the presence of 1 or more risk factors for atherosclerotic cardiovascular disease.

All patients provided written informed consent prior to their participation in this study which was approved by the ethics committee and has been performed in accordance with the Helsinki Declaration of 1975.

All values were expressed as mean ± standard deviation (SD) or median (interquartile range) unless indicated otherwise. Data of men with SA and women with SA were compared using the Student t test for normally distributed data or the Mann-Whitney U test for non-normally distributed data. The Fisher exact test or the Chi square test was used to compare nominal variables between the two groups.

The characteristics used for the individual matching are shown in Table 1. As a result of matching, there were no significant differences in the variables used for matching between men and women. Patient data on subjective sleepiness and polysomnographic parameters other than AHI are shown in Table 2. The AHI in the rapid eye movement (REM-AHI) sleep was significantly higher in women than in men, whereas the AHI in the supine position (Supine-AHI) was significantly lower in women than in men. Women had a significantly longer total sleep time (TST) and a shorter non-rapid eye movement (NREM) sleep stage 1 (N1), %TST, which represents light sleep, and a significantly longer N3, %TST, which indicates deep sleep. Additionally, women had a significantly higher sleep efficiency than men. 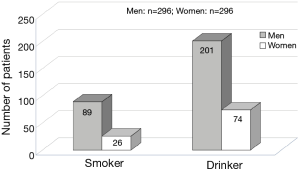 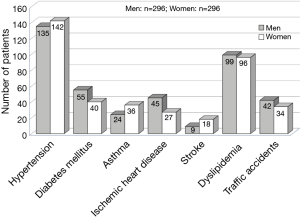 In this investigation, we compared the ESS scores and polysomnography data between men and women with SA in a case-matched control study. We found that women with SA had higher ESS scores, stronger subjective symptoms of drowsiness, significantly longer TST and N3, %TST, and better sleep efficiency than their male counterparts. The REM-AHI was significantly higher in women than in men, whereas the supine-AHI was significantly lower in women than in men. However, we did not find any significant differences in other polysomnography data between men and women.

Japanese women currently have many duties, such as housework, childcare, and remunerated employment. According to a 2006 report by Ota et al. (Department of Labor, Bureau of Statistics, Ministry of Internal Affairs and Communications), Japanese women have a shorter sleep time than Japanese men and women from other countries (9).

The actual daily shortage of sleep among Japanese women with SA may explain the high ESS scores in the present study, pertaining specifically to daily sleep rather than sleep on admission up to the polysomnography test. It was thus deemed necessary to consider ESS scores independently from the evaluation of polysomnographic findings. However, women and men with SA were investigated and compared under the same conditions to examine gender differences. The polysomnographic findings indicated that women with SA had a longer TST and N3, %TST than men of the same age, degree of obesity, and severity, indicating that they had more deep sleep.

In the context of the gender difference of SA patients, there are at least four implications that can be drawn from these results.

The first implication concerns the anatomical structures involved in upper airway closure. The pharynxes of men are significantly longer (10) and have a wider cross-sectional area and a larger capacity (11); however, they experience more extensive changes in the pharyngeal area which are associated with changes in the lung capacity than women (12). Despite this, a number of reports (12-14) have shown that men have a higher tendency for airway collapse than women. These results are supported by our findings that the symptoms of women with SA are milder than those of men with SA for supine-AHI. Shigeta et al. reported that men consistently had larger total oropharynx length and volumes than women in Japan and that the airway lengthens with aging in Japanese men and results in SA development (15).

The third implication concerns the gender difference in endocrine function. Endocrine function may contribute to the control of sleep breathing and SA. Combined progestin and estrogen administration was previously reported to reduce the number of sleep-disordered breathing episodes in postmenopausal women. Several considerations suggested that the decline in sleep-disordered breathing was attributable to the combined progesterone and estrogen secretion (18).

In this study, the mean age of the men and women was approximately 60 years, with the majority of women being postmenopausal. We speculate that a hormone other than progesterone and estrogen contributes to SA reduction. Estrogen is produced by the adipose tissue through the action of aromatase in postmenopausal women. This may make women with SA have a deeper sleep than men with SA.

Leptin alters neuroendocrine functions as well as energy intake and expenditure by binding to specific receptors in the hypothalamus (19). Leptin can prevent respiratory depression in cases of obesity, suggesting that OSA may be caused by leptin resistance (20,21). Some studies showed that women have substantially higher leptin levels than men for a given BMI (22,23). Thus, leptin may also play a protective role against SA development in women.

Many clinical reports suggest that testosterone supplementation in hypogonadal men is associated with the induction or worsening of OSA symptoms (24,25). Testosterone may worsen breathing by neuromuscular mechanisms. Moreover, testosterone increases upper airway collapsibility (26), ventilation, and hypoxic (27) and hypercapnic ventilatory responses (28), leading to a reduced apneic threshold. From this background, we believe that testosterone contributes to gender differences in SA patients.

It is thought that gender differences in the sleep variables of SA patients are due to these multiple factors.

Future prospective studies are necessary to investigate endocrine function test and polysomnography tests, including electromyography of pharyngeal dilators and electroencephalography based on patient attributes such as a history of smoking and drinking. Furthermore, medical professionals involved in sleep medicine must be fully aware of the gender differences in the clinicopathological features of SA, and take these differences into careful consideration in the treatment and diagnosis of women with SA.

In conclusion, we found that women with SA had significantly longer TST and N3, %TST, and better sleep efficiency than their male counterparts. There are at least four implications of these results we mentioned above. In the future, a prospective study is needed to definitively confirm the findings of our retrospective study.

The authors are grateful to Dr. Edward Barroga, Associate Professor and Senior Medical Editor from the Department of International Medical Communications of Tokyo Medical University for editing the manuscript.

This study was supported by a fund provided partly by Japan Agency for Medical Research Development and Health Labour Science Research Grant.