Long-segment tracheal resection and reconstruction is technically challenging. Reportedly, the maximum length of trachea that can be resected is considered to be 50% of an adult trachea (1). Adjunctive tracheal release maneuvers are utilized to decrease anastomotic tension (2). Historically, hilar and pericardial releases have been performed via median sternotomy or thoracotomy. A video-assisted thoracoscopic surgery (VATS) approach has rarely been applied. We report the successful use of bilateral hilar and pericardial release via VATS to resect a long segment tracheal adenoid cystic carcinoma.

A 32-year-old man presented to our university hospital with a 2-year history of persistent cough and shortness of breath. Chest computed tomography (CT) findings revealed a 5.5 cm × 3.0 cm × 3.0 cm lesion on the posterior wall of the thoracic trachea, just above the level of the carina. Bronchoscopy demonstrated a tracheal neoplasm appropriately 7.0 cm distal to the glottis, with a major axis of 5.5 cm in diameter, accounting for 80% of the cross-sectional area of the trachea (Figure 1A-1C). Endoscopic biopsy was performed and laser treatment was used to recanalize the airway. Pathology confirmed a diagnosis of adenoid cystic carcinoma.

Figure 1 Preoperative evaluation. (A,B) Coronal and sagittal view of chest CT revealing a mass located above the level of the carina, measuring 5.5 cm × 3.0 cm × 3.0 cm in size. (C) Bronchoscopy revealed a tracheal neoplasm appropriately 7.0 cm below the level of glottis and obstructing 80% of the cross-sectional area of the tracheal lumen. CT, computed tomography.

The patient underwent general anesthesia with a double lumen endotracheal tube. He was initially positioned in the right lateral decubitus position, and a left hilar and pericardial release was performed via biportal VATS. The inferior pulmonary ligament was released. The pericardium was incised between the superior pulmonary vein and the phrenic nerve. The incision was directed anteriorly to reach the arterial ligament to expose the left pulmonary trunk, inferiorly to the pulmonary vein, and directed posteriorly to reach the left main bronchus (LMB), creating an “O” shaped incision (Figure 2A,2B). The LMB was dissected free of the pulmonary artery to allow for a complete circumferential hilar release. Subcarinal lymph nodes were removed, and one drainage tube was placed. 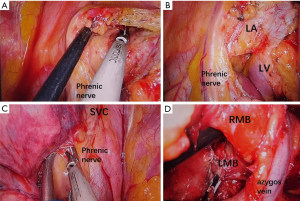 The patient was then positioned in the left lateral decubitus position. The right hilar release was carried out in a similar fashion. The pericardium was incised between the right superior pulmonary vein and superior vena cava (SVC). The space between the right pulmonary artery trunk and right main bronchus (RMB) was also released (Figure 2C,2D). Station 2 and 4 lymph nodes and paratracheal tissues were also removed. Another chest drain was placed in the right pleural space.

The patient was then rotated supine and the infrahyoid release was performed through a cervical collar incision. Subsequently, the tracheal resection was performed via median sternotomy. It was noted that the bilateral hilar releases added a total of 2.5 cm of additional mobility to the trachea when the distal trachea was pulled upwards. The tumor-involved tracheal segments were removed, totaling 6.0 cm in length. The specimen was sent for frozen section, which demonstrated microscopic clearance of tumor in the cut margins. Then, an end-to-end anastomosis was performed using interrupted 4-0 Vicryl sutures along the membranous wall and separate single and figure-of-eight sutures along the cartilaginous wall. The thymus and surrounding tissues were used to cover the anastomotic site (Figure 3), and two mediastinal drains were placed at the site of the tracheal anastomosis. The total operative duration was 4.5 hours, in which 1 hour was used for the VATS bilateral hilar and pericardial releases. After completion of the resection, two chin sutures were placed to ensure continued neck flexion, and the patient was returned to the intensive care unit on mechanical ventilation.

On postoperative day 2, the endotracheal tube was removed, but bronchoscopic sputum aspiration was still required on a daily basis as the patient had poor spontaneous expectoration. The mediastinal drains were removed on postoperative day 7. Swallowing dysfunction was transient, and improved within 10 days after speech and swallowing therapy. The remainder of the patient’s postoperative course was uneventful, and CT scan after one month postoperatively showed good luminal patency in the trachea surrounded by thymic tissue (Figure 4).

All procedures performed in this study were in accordance with the ethical standards of the Ethics Committee of Shanghai Pulmonary Hospital (No. K21-291) and with the Helsinki Declaration (as revised in 2013). Written informed consent was obtained from the patient for publication of this article and accompanying images. A copy of the written consent is available for review by the editorial office of this journal.

The key principle of long-segment tracheal resection lies in a tension-free anastomosis (1). Bilateral hilar and pericardial releases have been traditionally achieved via thoracotomy, but have rarely been done due to the extensive nature of the operation and the prolonged recovery time (2). Although access to either hilum can also be achieved through a median sternotomy, intrapericardial release via a transpleural approach is difficult due to poor visualization (2). A previous report demonstrated the viability of a VATS right hilar release and transcervical tracheal tumor resection (3); however, the effect of bilateral hilar and pericardial releases via VATS for mid-lower tracheal tumors remains unclear.

In this patient, we released the bilateral hilum through a bilateral two-portal VATS approach. The hilum can be easily exposed with good visualization using thoracoscopy and the pericardium can be safely resected. Compared with open thoracotomy, a VATS approach could achieve an equivalent effect but with less thoracic trauma and a faster recovery. Notably, extensive release maneuvers may compromise the blood supply to the trachea, thus hampering healing of the anastomosis. We therefore preserved the thymus and surrounding tissues, and used them to cover and reinforce the anastomotic suture line, to decrease the risk of anastomotic dehiscence due to poor tracheal blood supply in the early postoperative period.

The patient in this case underwent a long-segment trachea resection (up to 50% of the trachea) with primary reconstruction, and had an unremarkable postoperative course. We demonstrate the safety and feasibility of a bilateral hilar release via VATS, avoiding the potential complications related to a thoracotomy. This approach can be considered to be a viable, less invasive alternative to reduce anastomotic tension in the setting of long-segment trachea resections.

We would like to thank Dr. Xiaoying Lou for her help in polishing our paper.

Conflicts of Interest: All authors have completed the ICMJE uniform disclosure form (available at https://jtd.amegroups.com/article/view/10.21037/jtd-21-1866/coif). The authors have no conflicts of interest to declare.

Ethical Statement: The authors are accountable for all aspects of the work in ensuring that questions related to the accuracy or integrity of any part of the work are appropriately investigated and resolved. All procedures performed in this study were in accordance with the ethical standards of the Ethics Committee of Shanghai Pulmonary Hospital (No. K21-291) and with the Helsinki Declaration (as revised in 2013). Written informed consent was obtained from the patient for publication of this article and accompanying images. A copy of the written consent is available for review by the editorial office of this journal.