Obstructive sleep apnea (OSA) is a chronic sleep disorder characterized by a marked reduction or complete cessation of airflow during sleep, affecting 3–24% of the general population (1). It significantly reduces the quality of life and increases the risks of metabolic disorders, hypertension, cardiovascular disease, stroke, and traffic accidents (2-4). Moderate-to-severe OSA, the prevalence of which is 1–14%, is more commonly associated with risks of hypertension, coronary artery disease, and dysfunctional metabolism than mild OSA (5,6), early screening and diagnosis of moderate-to-severe OSA is thus important. However, epidemiological studies have shown that the prevalence of the undiagnosed condition among general populations is as high as 93% in males and 82% in females (7). Although overnight polysomnography (PSG) remains the gold standard for OSA diagnosis, it is difficult to schedule this for snorers given the enormous pressure on hospitalization in China. PSG is expensive and requires a dedicated setup. Moreover, professional staff require extensive training, and the process is time-consuming. All of these factors contribute to the poor diagnosed prevalence. Portable sleep monitor is a cost-effective alternative to PSG, but it is still more expensive and complicated compared with questionnaire survey, and it may underestimate the severity of OSA and potentially yield false-negative results (8). Thus, a simple screening tool for moderate-to-severe OSA is urgently required.

Tools including Epworth Sleepiness Scale (ESS), NoSAS score, and STOP-BANG questionnaire (SBQ) are commonly used to screen for OSA. The ESS yields a subjective measure of excessive daytime sleepiness, and has been widely used to predict OSA (9), but some authors have argued that it is ineffective (10). NoSAS is a new and effective screening tool, but it has been frequently reported to be of insufficient accuracy (11). The SBQ is recognized as one of the best means for OSA screening, but the specificity is unsatisfactory and the results are rather inconsistent (12,13). Also, cutoff applicable to all populations has not been defined (14). New predictive models have recently been reported, but most of them are complicated with poor specificity and inconsistency, which often require biochemical parameters (10,12).

Therefore, we performed a large-scale study to develop a simple and effective screening tool for moderate-to-severe OSA based on the best questionnaire among ESS, NoSAS score and SBQ by evaluating their diagnostic efficiency. We present the following article in accordance with the STARD reporting checklist (available at https://jtd.amegroups.com/article/view/10.21037/jtd-20-2027/rc). 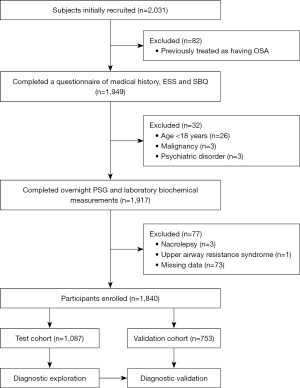 Anthropometric measurements including neck circumference (NC), waist circumference (WC) and hip circumference (HC) were measured following standardized protocols. The body mass index (BMI) was the weight divided by the height squared. Blood pressure was measured on the morning after PSG by trained nurses using mercury sphygmomanometers after each patient had rested for at least 5 min in a quiet environment and the result was the average value of three measurements.

All subjects were requested to complete a questionnaire exploring personal information, alcohol consumption and smoking histories, and any prior illnesses and medical treatments. The ESS explores subjective sleepiness in eight situations (15). Respondents use a four-point scale [0–3] to respond to each of the eight questions, and the scores are summed to give an overall score from 0–24. The NoSAS score has been widely used including Chinese (16,17), and the final score can range from 0–17, with 4 points for an NC ≥40 cm; 3 for a BMI 25–30 kg/m2 or 5 for a BMI ≥30 kg/m2; 2 for snoring; 4 for age ≥55 years; and 2 for being male. The SBQ features eight questions exploring snoring (S), tiredness (T), observed breathing cessation (O), blood pressure (P), BMI (B), age (A), NC, and gender (G) with better performance in Chinese (18,19).

All statistical analysis was performed with the aid of SPSS ver. 21.0 software (SPSS, Chicago, IL, USA). Dichotomous variables were expressed as percentages and continuous variables as means ± standard deviations (SDs); skewed variables were expressed as medians ± interquartile ranges. The significance of between-group differences in baseline characteristics was examined using the Mann-Whitney U-test, the Wilcoxon rank sum test, or the χ2 test. Logistic regression analyses were performed to derive odds ratios with 95% conﬁdence intervals [ORs (95% CIs)] for moderate-to-severe OSA. Receiver operating characteristic (ROC) curves were drawn to assess the diagnostic accuracy of ESS, NoSAS and SBQ evaluations, and that of the predictive model. Sensitivities and specificities were also recorded. Youden’s index (sensitivity + specificity − 1) was used to determine cutoffs maximizing diagnostic utility. A P value <0.05 was considered to be significance.

In total, 1,840 consecutive subjects were enrolled, of whom 1,087 were in the test cohort and 753 in the validation cohort (Figure 1). The basic characteristics of all subjects are shown in Table 1. Males were more obese and tended to have a higher AHI and more severe hypoxia than females. Females had lower BMI, NC, WC, and HC, and lower triglyceride and low-density lipoprotein levels than males in both cohorts (all P<0.05). The fasting blood glucose levels significantly differed by gender in test cohort while the difference was not significant in validation cohort. In contrast, the serum level of total cholesterol significantly differed by gender in validation cohort while the difference was not significant in test cohort. The ESS, NoSAS, and SBQ scores were significantly higher in males than females (all P<0.001).

Performance of ESS, NoSAS, and SBQ

The efficiency of ESS, NoSAS and STOP-BANG in predicting moderate to severe OSAHS

A predictive model based on SBQ

Performance of the final model in the test and validation cohort 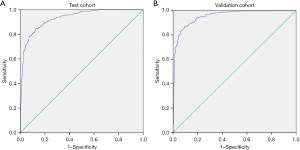 In the present large-scale study, we found that the SBQ was effective when used to screen for moderate-to-severe OSA, and it performed better than the ESS and NoSAS in this context. The predictive model based on SBQ, WC and LpO2 afforded excellent diagnostic efficiencies.

Given the severity of the condition and the low diagnosis rate, some studies have focused on screening for moderate-to-severe OSA using questionnaires such as the ESS, NoSAS, and SBQ (20,21). ESS is often used to assess subjective sleepiness (15); higher scores are associated with an increased risk of metabolic syndrome in males with OSA (22). Although the ESS is widely used to screen for OSA, its diagnostic reliability has been questioned. Kum et al. (23) found that ESS scores increased as AHI thresholds increased, but some studies have found weak or no correlations between ESS scores and OSA severity, suggesting that the ESS may not aid in OSA diagnosis (10,24). We found that the ESS did not reliably predict moderate-to-severe OSA, in agreement with Miller and Ghandeharioun et al. (10,24). Maybe it was because that the ESS is totally subjective and influenced by many factors including daytime naps and blood pressure (25,26).

The NoSAS, which measures five items objectively, is a new and effective screening tool affording better performance, and has been validated in an external population (16,17). It was demonstrated that the NoSAS exhibited good predictive performances in both European and Asian populations (17,27). However, Giampá et al. (11) found that the NoSAS was inaccurate when used to diagnose OSA in patients with resistant hypertension. We found that the NoSAS yielded a better AUC but had a low sensitivity in terms of predicting moderate and severe OSA, perhaps because some subjective symptoms are also usefully predictive.

SBQ is a part-self-administered questionnaire based on the Berlin instrument, and includes both subjective symptoms and objective indicators; the design is thus more reasonable than that of the ESS. SBQ is an acronym derived from the first letters of the questions (18,19), facilitating completion of the instrument. Many researchers consider SBQ to be one of the best measures for OSA screening. Chiu et al. (20), in a meta-analysis of various questionnaires, concluded that SBQ optimally screened for OSA. A recent report also indicated that SBQ was diagnostically more accurate than the ESS (10). However, similar to most questionnaires, SBQ affords high sensitivity but only low specificity when diagnosing mild, moderate, and severe OSA (12,13), and no one cutoff is appropriate for all populations (14,18). We found that SBQ was moderately effective when used to predict moderate-to-severe OSA, and the performance was better than ESS and NoSAS.

An AASM task force evaluated the current screening tools, and concluded that no single tool was ideal (28). Therefore, development of a predictive model affording adequate sensitivity and specificity became urgent. Simpson et al. (29) reported that a combination of snoring frequency and hypertension status could be used to identify those with moderate-to-severe OSA in general populations, but the sample size was small and diagnosis of moderate-to-severe OSA was not PSG-based. Sun et al. (30) used an artificial intelligence model to screen for moderate-to-severe OSA. The sensitivity and specificity were satisfactory, but only 120 patients were evaluated. We built a new model based on SBQ data, WC and LSpO2 that are readily available. The AUCs, sensitivities, and specificities for both males and females were good. In the validation cohort, model performance was excellent.

Although we enrolled a relatively large number of subjects, our work had certain limitations. Firstly, the prevalence of OSA in subjects referred to our sleep center was higher than that in the general population, which may compromise the generalization of our model. Secondly, ethnicity or menopausal status may affect sleepiness in females with suspected OSA. Significantly, in our sample, the percentage and severity of female OSA were much lower than that of male OSA, but the situation may be different in other samples and the predictive value will be affected as the prevalence of moderate to severe OSA changes among samples. Therefore, the diagnostic efficiency of our model must be further verified in other samples including different country of residence and ethnicity.

In conclusion, the SBQ performed excellently in screening moderate-to-severe OSA. And a predictive model that combined SBQ with WC and LpO2 afforded excellent diagnostic efficiency, which provided a simple and effective screening tool for OSAHS.

We thank all of the participants and survey staffs for their participation. And we thank the language editing service by Textcheck.

Provenance and Peer Review: This article was a standard submission to the series “Sleep Section” published in the Journal of Thoracic Disease. The article has undergone external peer review.

Reporting Checklist: The authors have completed the STARD reporting checklist. Available at https://jtd.amegroups.com/article/view/10.21037/jtd-20-2027/rc

Conflicts of Interest: All authors have completed the ICMJE uniform disclosure form (available at https://jtd.amegroups.com/article/view/10.21037/jtd-20-2027/coif). The series “Sleep Section” was commissioned by the editorial office without any funding or sponsorship. The authors have no other conflicts of interest to declare.

Ethical Statement: The authors are accountable for all aspects of the work in ensuring that questions related to the accuracy or integrity of any part of the work are appropriately investigated and resolved. The study was conducted in accordance with the Declaration of Helsinki (as revised in 2013). The study was approved by the Ethic Committee of Shanghai Jiao Tong University Affiliated Sixth People’s Hospital [No. 2019-KY-050(K)].Informed consent was obtained from all individual participants included in the study.