With the constant improvement in thoracoscopic techniques, an increasing number of thoracic surgeons have performed single-port video-assisted thoracic surgery (VATS) lung resections. However, few reports are available on uniportal VATS lobectomies with bronchovascular and carinal reconstructions for lung cancer in recent years (1,2). In Russia, the number of sleeve lobectomies performed using VATS remains unknown. Uniportal VATS lobectomy has been adopted for patients with central localised tumours requiring bronchovascular and carinal sleeve resections. This study describes the experience of implementing the VATS double-sleeve lobectomy and carinal resections in these patients.

The patients were positioned in a typical lateral decubitus position, and one-lung ventilation general anaesthesia was administered. A 5- to 6-cm incision was made in the fifth intercostal space. A wound protector was placed to provide optimal exposure.

The operation started with dissection of the mediastinal pleura above the root of the lung. If the tumour affected the mediastinal pleura and phrenic nerve, a resection of those structures was performed (Figure 1). Next, dissection and revision of the blood vessels at the root of the lung were conducted. Once the procedure was indicated, the upper pulmonary vein would be dissected and then transected with an endostapler or an open surgical stapler (Figures 2,3). The left pulmonary artery was then dissected, and the ligamentum botalli was transected (Figure 4). The left main lower lobe and upper lobe bronchi were dissected thereafter. The arterial forceps were used to clamp the central part of the artery; a bulldog clamp was placed on the lower lobe artery. Next, 5,000 IU of heparin was administered prior to transecting the arteries. In each case, en bloc resection was completed (Figure 5). Urgent histological examination of the resection margins was carried out in each case. Once a positive margin was confirmed, a re-resection of the margin would be completed. The specimen was placed temporarily into the diaphragmatic sinus. At the beginning of the reconstruction phase, bronchial anastomosis was performed using complete continuous suture. The procedure started with the lateral wall, and then continued with the medial wall. The anterior wall of the anastomosis was the last to be reconstructed (Figure 6). Once the sutures were tied, a water probe was used. The last suture was closed with a Hem-o-lock or titanium vascular clips. The artery was reconstructed with complete continuous monofilament suture in two lines: the first suture line was placed in the lateral wall of the anastomosis, and then the posterior and partly inner walls were formed (Figure 7). Next, the anterior wall of the anastomosis was constructed using the second suture line (Figure 8). De-aeration of the anastomosis was performed before the suture was tied. Oxidised regenerated cellulose was used to cover the anastomosis. The specimen was removed in endo-catch. Systematic lymph node dissection was performed in all of the cases. 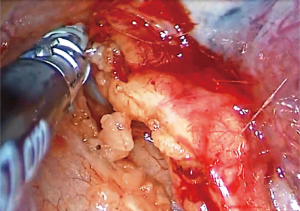 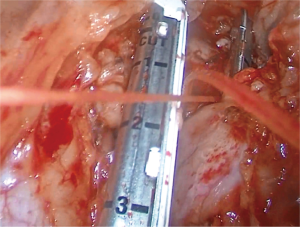 Figure 2 Dividing of the left upper lobe vein by endostapler. 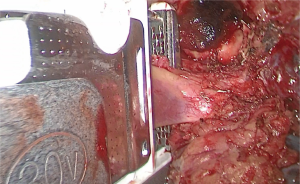 Figure 3 Dividing of the left upper lobe vein by stapler for open surgery. 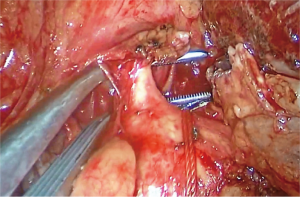 Figure 4 Dividing of the ligamentum botalli. 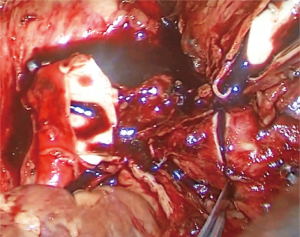 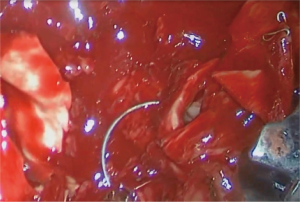 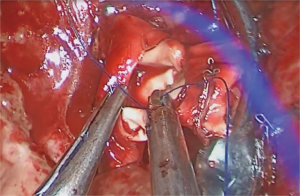 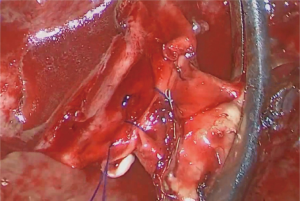 Before dissection, the mediastinal pleura were inspected to assess the mobility of the tumour and its invasion into surrounding structures. In one case, the vena cava superior was affected by the tumour, and it was subjected to partial resection (Figures 9,10). Next, mediastinal lymph node dissection and dissection of the pulmonary vessels, right main bronchus, and carina were carried out. Once radical surgery was guaranteed, the pulmonary vessels of the lobe or lung being removed were transected with endostaplers. Carinal division was performed using a double-lumen tube (Figure 11). Urgent histological examination of the resection margins was carried out in each case. Once a positive margin was confirmed, a re-resection of the margin would be completed. After removal of the specimen and checking for haemostasis, the patients were switched to high-frequency ventilation to facilitate the performance of tracheobronchial anastomosis (Figure 12). The anastomosis was performed using complete continuous suture in two lines. The first suture line was placed on the left wall of the trachea and left main bronchus, and then on its membranous part and partially on the right wall of the trachea (Figure 13). The second suture line was placed on the anterior and right walls of the anastomosis (Figure 14). Once the sutures were tied, they were tested with water and were closed with vascular clips. The anastomosis was then covered with the pleural flap from the anterior mediastinum (Figure 15). Systematic lymph node dissection was performed in all of the cases. 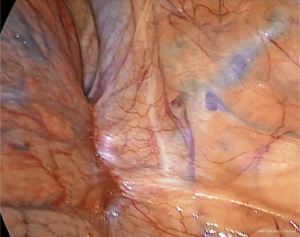 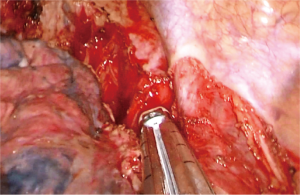 Figure 10 Partial resection of the vena cava superior by endostapler. 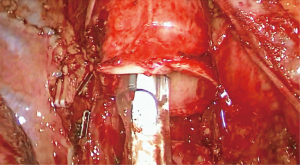 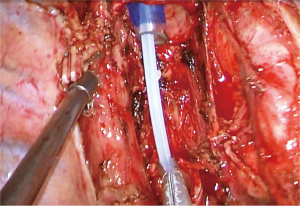 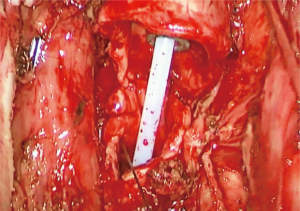 Figure 13 Performing the left wall of the trachea-bronchial anastomosis. 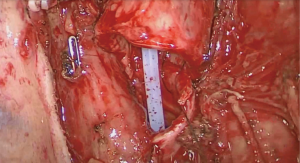 Figure 14 Performing the anterior wall of the trachea-bronchial anastomosis. 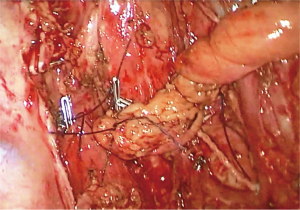 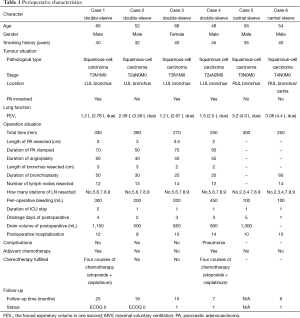 A standard, single-port approach, thoroughly described by Diego Gonzalez-Rivas, was used in this study (3-5). Using a plastic wound protector is very helpful when performing bronchial and arterial anastomoses.

When performing VATS double-sleeve lobectomy and carinal resections, a surgeon has to face the same challenges as those that occur during open surgery. These are generally related to large-sized tumours accompanied by inflammatory changes in the pleural cavity and hilum, and strong adhesions after neoadjuvant chemo radiotherapy. To perform such complicated procedures, one has to be skilled in using a single-port approach for standard lobectomies. In our opinion, 100 cases and more are required to achieve efficiency, and to begin perform double sleeve and carinal resections. The perfect collaboration and coordination with the anaesthesiologist is mandatory when performing these complex reconstructive procedures.

The uniportal approach provides a direct view when performing anastomoses, bringing the technique closer to open surgery. All types of anastomoses were performed using complete continuous suture. V-Loc thread was used to perform bronchial and tracheobronchial anastomoses. The V-Loc wound closure device (Covidien, USA) is a novel, absorbable barbed suture device that facilitates secure wound closure without knot tying. The 4-0 and 5-0 Prolene sutures are used for vascular anastomoses. The use of special VATS instruments (Scanlan) is preferable when performing the procedures.

For double-sleeve procedures, it is very important to understand and visualise the extent of tumour invasion into the artery of the lower lobe in order to define the fundamental ability to perform this procedure. Usually, double-sleeve cases involve large tumours, in which portions of the tumour blood vessels free from very short. Thus, in all double-sleeve cases, pericardiotomy and intrapericardial upper pulmonary vein isolation should be performed. It is also important, upon the decision to mobilise the pulmonary artery, to consider the transection of the ductus arteriosus, which extends 1–1.5 cm and allows for safer placing of the arterial clamp. Shallow mobility of the hilar vessels in some patients limits the use of standard endoscopic staplers. The 45% maximum articulation of these devices is not always possible during single-port procedures to divide the upper pulmonary vein. To overcome this situation, we use a 30-mm vascular stapler for open surgery or ligature to divide the vein safely.

Carinal resections and reconstructions, with or without lung resection, are challenging operations that may be indicated in less than 1% of operable patients with non-small-cell lung carcinoma or benign lesions involving the carina (6).

These are complex procedures, even for open surgery. To confirm the possibility of performing carinal resection, it should be possible to mobilise the trachea, carina, and vessels of the lungs. In all cases of carinal resections, the azygos vein was ligated and crossed. To prevent the aspiration of blood into the left main bronchus, carinal resection was performed on the double-lumen tube. This allowed safe transection of the trachea and left main bronchus, and the performance of haemostasis. Next, we switched to high-frequency ventilation. Regarding the tracheobronchial anastomosis, we always tried to invaginate the bronchus into the trachea. In our opinion, telescopic anastomosis is more secure. For tracheobronchial anastomosis, we always tried to cover the pleural flap.

Our recent experience demonstrated that the uniportal approach is a feasible and safe procedure for performing double-sleeve and carinal resections. These complex resections should only be performed by expert uniportal VATS surgeons.

Our clinical outcomes are limited to a small number of patients with a relatively short follow-up time. To further evaluate the feasibility, safety, and efficacy of this technique, more experience would be required.