The extent of pulmonary resection for lung metastases from colorectal cancer

In this editorial, we would like to provide several topics that could influence determining the surgical procedure and clinical outcome for lung metastases from colorectal cancer (CRC) in reference to the review article “Impact of the extent of lung resection on postoperative outcomes of pulmonary metastasectomy for colorectal cancer metastases: an exploratory systematic review” reported by Prisciandaro and colleagues (1).

Surgical resection is the common strategy for curative intent for selected patients with lung metastases from CRC and it can provide survival benefits with a 5-year survival rate of >50% (2). In general, wedge resection has long been accepted as an appropriate strategy worldwide (3,4). The rationale for this approach might be based on the following reasons: the potential for resecting multiple lesions while preserving postoperative respiratory function, the lack of data about the benefit of anatomical resections, and the potential for safety without postoperative complications. However, non-anatomical resection might be associated with an increased risk of local recurrence (5), and local recurrence and its progression can lead to death following lung resection for metastases from CRC (6).

On the other hand, their discussion addressed two important points about the benefit of anatomical resection. At first, RFS might be affected by the surgical margin distance. Practically, wedge resection is accepted for relatively small tumors and close to visceral pleura. However, segmentectomy assures a better surgical margin than a wedge resection when the tumor is so large or/and deep that the surgical margins cannot be obtained sufficiently. The frequency of recurrence at the surgical margin has been reported to be between 3.9% and 27.9% (4,5,7-10). The definition of the sufficient length of surgical margin is controversial. Nelson et al. (11) retrospectively evaluated the association between tumor size and length of surgical margins in 335 patients. They revealed that a longer margin length decreased the risk of local recurrence (hazard ratio, 0.434 per additional cm in length; P=0.015), while a larger tumor size increased the risk (hazard ratio, 1.520 per additional cm in size; P=0.012). Moreover, they evaluated the influence of margin on tumor recurrence and demonstrated that a margin length of at least half the tumor length could decrease the recurrence rate to under 11% for tumors of 3 cm or less. The study also revealed that if a 1 cm margin could be obtained for a 1 cm tumor or a 2 cm margin for a 2 to 4 cm tumor, the recurrence rate would decrease by approximately half. It may be difficult to obtain a surgical margin over 2 cm by wedge resection when the center of the tumor is not located in the outer third of the lung field or the size of tumor is more than 2 cm. In this cases, anatomical resection may be reasonable.

In addition, the presence of spread through alveolar space (STAS) is also an important factor in local recurrence. STAS has been recognized as an invasion pattern in primary lung cancer. It is defined as the spread of lung cancer cells into air spaces in the lung parenchyma beyond the edge of the main tumor (12). In the field of primary lung cancer, STAS has been recognized as an important negative prognostic factor. As for the surgical margin, Eguchi et al. reported that the recurrence rate in patients with STAS-positive tumors and who underwent sublobar resection was high regardless of the margin/tumor length ratio (13). On the other hand, Masai et al. reported that no local recurrence occurred with a surgical margin greater than 2 cm, regardless of other factors, including tumor size, surgical procedure, and the presence of STAS (14). On the other hand, in the field of lung metastases, STAS has also been recognized as a poor prognostic factor (15,16). STAS was observed in lung metastases from CRC, ranging from 15% to 40% of the cases (12,16,17). Welter et al. investigated the presence of satellite tumors in resected specimens of 17 lung metastases from CRC (17), which revealed that satellite tumors that could replace STAS were found within 7.4 mm around the nodule in 99.73% of cases. They also evaluated the association between the length of the surgical margin and local recurrence rate after lung metastasectomy in the other study, which revealed that local recurrence occurred frequently with a surgical margin less than 7.0 mm (18). However, in their study, because relapse occurred in only 7% of the cases, the presence of STAS did not influence the risk of local recurrence (P=0.239). Takeda-Miyata et al. revealed that the presence of STAS in resected lung metastases was associated with worse overall survival (P=0.002) and tended to increase the relapse rate at the site of the surgical margin (P=0.051) (16). In addition, a tumor margin of less than 1 cm was an independent poor prognostic factor for local recurrence (HR =6.36, 95% CI: 1.392–28.835, P=0.02). Taken together, considering the possibility of STAS, a surgical margin of at least 1 cm should be obtained.

Second, Prisciandaro and colleagues also mentioned the influence of gene mutation by quoting the report written by Renaud et al. (19). They revealed that the type of resection did not affect the overall survival and time to lung recurrence in the absence of Kirsten rat sarcoma virus (KRAS) mutations but significantly affected these in the presence of KRAS mutations. To date, several retrospective studies have revealed that KRAS mutations might be associated with a higher risk of lung recurrence, shorter recurrence-free survival, and shorter overall survival (20), whereas Nelson et al. reported that KRAS mutation was not associated with the risk of local recurrence (11). Therefore, the influence of KRAS mutation on the extent of lung metastasectomy still remains controversial. The surgeon should determine the extent of lung resection taking into account the size and depth of the tumor to achieve complete resection. However, there is still a lack of evidence about the adequate surgical margin. However, we believe that being aware of the presence of STAS can help at least consider how much surgical margin should be obtained. On the other hand, the presence or absence of genetic mutations may also influence the decision on the extent of lung resection, regardless of these factors (Figure 1). The well-constructed studies focusing on not only the size and depth but also the presence of STAS and gene mutation are urgent. 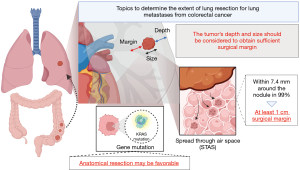 Figure 1 The summary of the topics to determine the extent of lung resection for lung metastases from colorectal cancer. KRAS, Kirsten rat sarcoma virus.

We should also discuss whether lobectomy or segmentectomy is preferred when anatomical resection is considered suitable. Lobectomy is one of the alternative procedures, whereas this procedure is associated with reducing pulmonary function and potentially higher mortality and morbidity compared with wedge resection. A prospective national survey was conducted in Spain (21) that registered 532 patients, and 1,050 lung resections were performed. In the multivariate analysis, lobectomy or greater lung resection was an independent risk factor for postoperative morbidity (odds ratio =1.9, 95% CI: 1.1–4.6). Lung segmentectomy is also considered when the wedge resection is inappropriate, but it requires knowledge of complex bronchovascular anatomy and the ability to understand spatial relationships while surgery. Indeed, this is an uncommon procedure for the management of lung metastases, and its rate ranged from 3% to 23% in previous studies (22), probably as a result of its difficulty and the desire to avoid perioperative complications. However, in this decade, especially in the field of primary lung cancer, the benefit and safety of lung segmentectomy for early-stage non-small cell lung cancer (NSCLC) have been revealed with growing evidence. JCOG0802/WJOG4607L is the largest phase III clinical trial (23) showing the efficacy and safety of lung segmentectomy in early-stage NSCLC, which revealed that segmentectomy was significantly superior to lobectomy in overall survival. Notably, in the safety results, the postoperative complications occurred at a similar frequency, while neither 30-day nor 90-day mortality was observed. This may be attributed to the development of surgical techniques and intensive perioperative management in the past few decades. Moreover, segmentectomy could reserve pulmonary function more than lobectomy (FEV1 reduction rate at 12 months after surgery, 8.5% vs. 12.0%, P<0.0001), though it did not reach the predefined threshold for clinical significance of 10%.

It goes without saying that primary lung cancer and lung metastases are biologically distinct. However, the safety of segmentectomy must be less or more the same. While complete resection is one of the most important goals of lung metastasectomy, surgeons should also consider preserving as much postoperative pulmonary function as possible because metastases from CRC frequently recur in the lungs (9) and sometimes require repeated resection (24). Thus, the extent of resection should be minimized while ensuring sufficient surgical margins to prevent marginal recurrence, and segmentectomy for lung metastases from CRC may provide greater benefits than wedge resection or lobectomy for selected patients.

In conclusion, although there is still no reliable evidence to determine to whom and when anatomical resection is effective, we believe it is important to provide a surgical procedure that prevents local recurrence and minimizes the extent of resection similar to primary lung cancer.

Figure 1 was created with BioRender.com.

Provenance and Peer Review: This article was commissioned by the editorial office, Journal of Thoracic Disease. The article did not undergo external peer review.

Conflicts of Interest: All authors have completed the ICMJE uniform disclosure form (available at https://jtd.amegroups.com/article/view/10.21037/jtd-22-1137/coif). The authors have no conflicts of interest to declare.

Ethical Statement: The authors are accountable for all aspects of the work, ensuring that questions related to the accuracy or integrity of any part of the work are appropriately investigated and resolved.