Pulmonary sarcomatoid carcinoma (PSC) is a type of rare malignant carcinoma of the lung. The incidence rate of PSC is about 0.1–0.4% among all types of pulmonary malignant carcinomas (1,2). In 1908, the first case of pulmonary carcinosarcoma was reported by Kika (3). In the 2004 World Health Organization (WHO) classification of lung tumors, PSC was divided into the following five subtypes: pleomorphic carcinoma, spindle cell carcinoma, giant cell carcinoma, carcinosarcoma, and pulmonary blastoma. Pleomorphic carcinoma is the most common subtype of PSC. The classification of PSC in 2021 is same as the classification of PSC in 2004 (4-6). Most patients do not have any specific symptoms. These symptoms are mainly associated with location of the tumor or invasion of the tumor (4).

In this article, we collected the long-term follow-up information of patients with PSC. The purpose of this study is to analyze the clinical characteristics and the prognostic factors of PSC. We present the following article in accordance with the STROBE reporting checklist (available at https://jtd.amegroups.com/article/view/10.21037/jtd-22-393/rc).

All of these patients who received treatment in the Cancer Hospital Chinese Academy of Medical Sciences from January 1, 2006, to December 31, 2015, were enrolled in this study, and all of them were diagnosed with pathologically confirmed PSC. Gender, age, body mass index (BMI), smoking history, family history, clinical symptoms, pathological type, tumor diameter, tumor-node-metastasis (TNM) stage (all of these patients were restaged based on the 8th edition of the TNM classification for lung cancer), tumor status, N staging, M staging, tumor location, surgery or no surgery, lung resection, types of treatment, and survival were retrospectively reviewed. All of these clinical characteristics were collected by retrieving patients’ medical records.

This was a retrospective study and the information of patients was anonymized. Most patients in our study died because of PSC, so it was impossible to sign informed consent. The study was conducted in accordance with the Declaration of Helsinki (as revised in 2013).

The study was approved by Ethics Committee of National Cancer Center/Cancer Hospital, Chinese Academy of Medical Sciences and Peking Union Medical College (No. 22/304-3506). This research did not influence the treatment and prognosis, and the requirement for obtaining written patient consent was waived.

Baseline demographics and correlation between patients’ basic characteristics and OS

Data are presented as n (%) or mean ± SD. P value: the P value in each group was calculated separately through the Kaplan-Meier method. Tumor diameter: the maximum diameter of tumor. NOS†, the subtypes in these 48 patients (sarcomatoid carcinoma) were not determined at that time; NOS‡, the size of the tumor in these patients were relatively more significant, and the location of tumors in these cases could not be classified into other groups combined lung resection; §, lobectomy combined with lobectomy or wedge resection. OS, overall survival; BMI, body mass index; TNM, tumor-node-metastasis; PSC, pulmonary sarcomatoid carcinoma; NOS, not otherwise specified; SD, standard deviation.

Most of the patients in our study were diagnosed with PSC at an early period. Therefore, the use of whole-genome sequencing and the examination of checkpoint antibodies were rarely seen in our study. Only 18 patients received whole genome sequencing. Five patients had Kirsten rat sarcoma viral oncogene homolog (KRAS) exon 12 mutations, two patients had epidermal growth factor receptor (EGFR) mutations, and one patient had anaplastic lymphoma kinase (ALK) rearrangement. The other ten patients did not have any gene mutations.

Correlation between basic tumor characteristics and 1-, 3-, and 5-year survival

P value: the P value in each group was obtained separately through the Kaplan-Meier method. TNM, tumor-node-metastasis.

In all patients included in this study, OS was not associated with gender, symptoms, family history of cancer, smoking history, pathological type, tumor location, surgery or no surgery, lung resection, and treatment modes (P>0.05, Table 1). 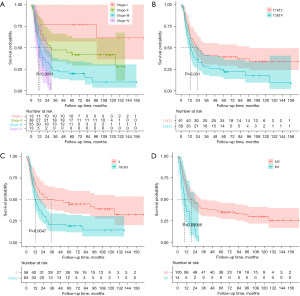 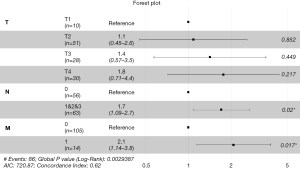 PSC is a rare type of non-small cell lung cancer with a poor prognosis. Most past research studies about PSC were small-scale case reports or database analyses (7-9). Tumor diameter did not influence the OS, but the T stage influenced the OS. It was inevitable that other tumor characteristics, such as invasion of the pleura and spread through air spaces, also influenced the OS (10,11). T-stage, lymph node status, and distant metastasis can influence the OS, 1-, 3-, and 5-year survival rates. Patients with lower TNM stage had a better prognosis. Just like the study of Gu et al., TNM was the main prognostic factor for PSC (7). Male patients and smokers, especially heavy smokers can easily suffer from PSC. Pleomorphic carcinoma is the primary subtype of PSC (1,3,8). Respiratory symptoms, such as cough and hemoptysis, are the most common symptoms of PSC (9). The nutritional status of patients may influence surgical or non-surgical treatment (12,13). BMI is one of the factors in assessing patients’ nutritional status. When BMI is <18.5 kg/m2, we think it indicates malnutrition. Irrespective of whether the patients receive surgery, target therapy, or any other treatment, they may have a poor prognosis. In our study, out of eight patients whose BMI was <18.5 kg/m2, six died until the last follow-up. The median OS of these eight patients was 10.00 months, which was lower than the OS of all patients in our study, but poor nutritional status did not influence the OS significantly (P=0.324). Metastatic locations of PSC are similar to those of the other types of non-small cell lung cancer, including lung, pleura, bone, brain, and adrenal glands (14-17). The metastatic locations of patients with stage-IV in our study were similar to the above. PSC can also metastasize to the upper lip and skin. However, the OS was generally low when PSC metastasized to these unusual organs (16,18,19).

Because of the limited effectiveness of chemotherapy in PSC and better effectiveness of targeted therapy and immunotherapy in the other types of lung cancer, an increasing number of research studies about the use of targeted therapy and immunotherapy in PSC have been conducted in recent years. The common mutations of PSC are TP53 mutations, KRAS mutations, EGFR mutations, MET mutations or amplification, ALK rearrangement, and fusion of ROS1 (23,24). About 3–31.8% of PSC patients may have MET exon 14 mutations, but the rate of EGFR mutations in PSC patients is uncertain (4,25). In the research by Chen et al. (2), only 5 (3.5%) patients had ALK rearrangement. In the case report by He et al., during the treatment process of afatinib and crizotinib for patients with EGFR mutations and MET amplification, kidney and adrenal gland metastases occurred in that patient. The patient died after stopping the use of medicine (26). Chen et al. (27) reported that a patient with KRAS mutation and EML4-ALK fusion showed a worse reaction to chemotherapy and crizotinib. The expression of MET mutations may become a sign of using MET tyrosine kinase inhibitors (TKIs), such as crizotinib and capmatinib (23,28). But patients without MET mutations have a better OS than patients with MET mutations. In other words, PSC with MET mutations is also a factor for poor prognosis (28,29). The same as KRAS (24,30). Five patients had KRAS mutations in our study, and all five died; the median survival time was 13.5 months (range, 5.13–60.97 months). The patient with ALK rearrangement in this study was still alive and had been using crizotinib/alectinib until the last follow-up. We can also see a better result in the research by Chen et al. (2). The other two patients with EGFR mutations died. Because of the worse therapeutic effect of chemotherapy, analysis of the whole genome sequencing of PSC patients may help us select suitable targeted drugs and predict the prognosis (31).

Immunotherapy is a novel therapeutic method for non-small cell lung cancer. Because of the lower morbidity of PSC, a large-scale prospective study of immune checkpoint inhibitors (ICIs) in PSC has hardly been conducted. In some small-scale studies, we can note that using ICIs can improve OS and progression-free survival. With an increase in the expression of PD-L1, the patients may achieve a better complete or partial response. Immunotherapy is an emerging therapy, and none of the patients received it in our study.

In summary, T-stage, lymph node, and distant metastases are the main factors that influence the OS of PSC. Complete resection of the tumor is one of the main treatments for PSC.

Reporting Checklist: The authors have completed the STROBE reporting checklist. Available at https://jtd.amegroups.com/article/view/10.21037/jtd-22-393/rc

Conflicts of Interest: All authors have completed the ICMJE uniform disclosure form (available at https://jtd.amegroups.com/article/view/10.21037/jtd-22-393/coif). The authors have no conflicts of interest to declare.

Ethical Statement: The authors are accountable for all aspects of the work in ensuring that questions related to the accuracy or integrity of any part of the work are appropriately investigated and resolved. The study was conducted in accordance with the Declaration of Helsinki (as revised in 2013). The study was approved by Ethics Committee of National Cancer Center/Cancer Hospital, Chinese Academy of Medical Sciences and Peking Union Medical College (No. 22/304-3506). This research did not influence the treatment and prognosis, and the requirement for obtaining written patient consent was waived.