Efficacy and safety of sivelestat sodium for the treatment of inflammatory response in acute Stanford type A aortic dissection: a retrospective cohort study

With an in-hospital mortality rate of 5–30% (1), acute Stanford type A aortic dissection (ATAAD) is one of the most lethal emergency procedures. Surgery remains the mainstay of treatment for ATAAD, during which cardiopulmonary bypass (CPB) is often required. CPB disrupts homeostasis within the human body, causing disorders of the nervous and endocrine systems, which in turn result in systemic inflammatory response syndrome (SIRS). If not effectively controlled, SIRS can cause sepsis, multiple organ dysfunction syndrome, and even death (2). SIRS following surgery dramatically increases the postoperative complications and mortality rate of patients who have undergone CPB.

Neutrophil elastase (NE) plays an important role in the inflammatory response by activating and processing tumor necrosis factor alpha, interleukin-1 (IL-1), interleukin-6 (IL-6), interleukin-8 (IL-8), and other pro-inflammatory cytokines (3). Sivelestat sodium is a NE inhibitor that can selectively inhibit the injury of NE to lung tissue and reduce inflammatory response. The efficacy of sivelestat on post perfusion lung, ischemia-reperfusion and endothelial injuries has been demonstrated in several investigations. The report showed the protective effects of this drug on pulmonary function after CPB in experiments (4-6). It has been reported that post-operative sivelestat administration after surgical operation improved the pathophysiological condition of SIRS and the post-operative clinical course. There is currently no effective drug for improving the associated systemic inflammatory response. In this study, we explored the efficacy and safety of sivelestat sodium in treating postoperative SIRS in ATAAD patients. We present the following article in accordance with the STROBE reporting checklist (available at https://jtd.amegroups.com/article/view/10.21037/jtd-22-1220/rc).

The clinical data of 71 ATAAD patients who received surgical treatment at our center from January 2021 to December 2021 were retrospectively analyzed. This study was approved by the Institutional Review Board (IRB) of our hospital (ethical approval No. WAGHMEC-KT-2022012). As a retrospective study, the requirement of informed consent was waived. The study was conducted in accordance with the Declaration of Helsinki (as revised in 2013).

Patients were divided into two groups according the date of surgery, September 2021, when we started sivelestat administration. The sivelestat sodium group (n=20), operated after September 2021, was administrated sivelestat. The control group (n=51), operated before September 2021, was not administrated. To be eligible for inclusion in this study, patients had to meet the following inclusion criteria: (I) have ATAAD as confirmed by coronary computed tomographic angiography; (II) have undergone surgical treatment of ATAAD via CPB; (III) received mechanical ventilation and met the ARDS Berlin criteria and (IV) be aged 25–75 years. Patients were excluded from the study if they met any of the following exclusion criteria: (I) had 3 or more damaged organs and/or organ failure; (II) had iatrogenic ATAAD; and/or (III) died within 24 hours of admission.

The 71 patients were divided into the following two groups based on the use (or lack of use) of sivelestat sodium (HuilunBio, Shanghai, China): (I) the sivelestat sodium group (n=51); and (II) the control group (n=20). Sivelestat sodium, which was administered only in the sivelestat sodium group, was given as a continuous intravenous infusion at 0.2 mg/kg/h (300 mg sivelestat sodium dissolved in 50 mL of 0.9% normal saline) for 3–7 days. An ICU physician made a diagnosis of ARDS on admission to the ICU and also made the decision whether to use sivelestat. The following conventional treatments were provided to patients in both groups: (I) mechanical ventilation via a Dräger ventilator (tidal volume: 6–8 mL/kg; inspiratory oxygen concentration: 40–100%; ventilation frequency: 16–18 times/min; positive end-expiratory pressure: 5–12 cmH2O; and inspiratory/expiratory ratio: 1.0:2.0–1.0:2.3); prone ventilation was administered if necessary; (II) antimicrobial therapy: Blood, sputum, and other specimens were collected from the patients for microbial testing. Antimicrobials were administered based on the results of the etiological data, pathogen cultures, and drug susceptibility tests; (III) sufentanil and propofol were used for analgesia and sedation, and a sedation score of –2 to –3 was therapeutically targeted; (IV) nutritional support was provided to patients with a targeted NRS-2002 (Nutrition Risk Screening, 2002) score of >3 points, a target energy intake of 25–30 kcal/kg (ideal body weight), and a target protein level of 1.2–2.0 g/kg; (V) rehabilitation measures, including passive and active rehabilitation, were implemented as soon as possible; (VI) organ function support treatment: patients with acute kidney injury, such as anuria, hyperkalemia, and severe metabolic acidosis received continuous renal replacement therapy.

The statistical analyses were completed using the SPSS 22.0 software package. Data were expressed as the mean ± standard deviation (SD), Student’s t-test was used to compare the distributions of normally distributed variables and Wilcoxon rank sum test was used to compare the distributions of non-normally distributed variables. The patient characteristics on admission to ICU were compared by Student’s t-test. The oxygenation index was analyzed by repeated two-way analysis of variance (ANOVA). A Fisher’s exact test or chi-squared test was used to compare the in-hospital mortality rate and length of ICU stay. All reported P values were two sided, and differences at P<0.05 were considered to be statistically significant in all tests.

Based on the inclusion criteria, 71 patients were ultimately included in the analysis, including 51 patients (72%) in the control group and 20 patients (28%) in the sivelestat sodium group. There were no significant differences between the two groups in terms of age, gender, height, weight, APACHE II score, preoperative echocardiographic left ventricular ejection fraction, routine blood tests, liver function, and renal function (all P>0.05; see Table 1).

There was no statistically significant difference in the oxygenation index (PaO2/FiO2) between the control group and the sivelestat sodium group at 4, 12, 24, 36, 48, 72, and 96 h after surgery (all P>0.05; see Table 2). Additionally, the WBC count, PCT level, and IL-6 level did not differ significantly between these two groups (all P>0.05). 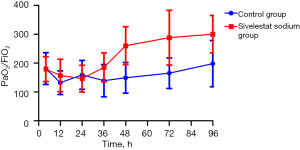 Figure 1 Comparison of oxygenation index in patients whose mechanical ventilation time was >96 h.

ATAAD is the most lethal cardiovascular disease. Its incidence rate is increasing annually, the natural prognosis is extremely poor, and the rates of surgical complications and mortality are high (1). The 48-h mortality rate can reach 50% and the 2-week mortality as high as 75% in patients who do not undergo surgery (7,8). Its surgical treatment requires CPB and deep hypothermic circulatory arrest (DHCA). In patients undergoing surgery with DHCA, the occurrence of SIRS also increases the postoperative mortality rate and the incidence of cerebral infarction, infection, bleeding, and other adverse events (9,10).

Yamaguchi et al. (16) explored the effect of prophylactic use of sivelestat sodium on bronchial inflammation and found that the prophylactic use of sivelestat sodium during transthoracic esophagectomy alleviated bronchial inflammation and shortened the duration of SIRS after the surgery. In a prospective, double-blind, randomized, controlled study performed after pediatric cardiac surgery, the postoperative WBC count, neutrophil percentage, and C-reactive protein of the control group were significantly higher than those of the sivelestat sodium group, suggesting sivelestat sodium improves the perioperative inflammatory response in pediatric patients undergoing cardiac surgery via CPB (17). In a study of septic patients, the sivelestat group showed significant improvements in oxygenation, thrombocytopenia, and multiple organ dysfunction scores compared to the control group, and the sivelestat group also had significantly fewer days of ventilator use and shorter ICU stay, and a halved in-hospital mortality rate compared to the control group (18).

The present study had some limitations. First, as a single-center retrospective study, it had a small sample size and biases. Second, we only analyzed the oxygenation index and a limited number of inflammatory mediators (e.g., the WBC count, PCT level, and IL-6 level) after surgery for aortic dissection. However, we did not analyze whether there were differences in other inflammatory mediators. Third, there might have been a bias in the selection of patients who received the sivelestat sodium treatment. Indeed, patients with severe postoperative inflammatory response were more likely to receive sivelestat sodium. As a result, the efficacy of sivelestat sodium might be more prominent in patients with longer ventilator use. Thus, prospective studies with large sample sizes urgently need to be conducted to examine the role of sivelestat sodium in improving postoperative inflammatory response.

Reporting Checklist: The authors have completed the STROBE reporting checklist. Available at https://jtd.amegroups.com/article/view/10.21037/jtd-22-1220/rc

Conflicts of Interest: All authors have completed the ICMJE uniform disclosure form (available at https://jtd.amegroups.com/article/view/10.21037/jtd-22-1220/coif). The authors have no conflicts of interest to declare.

Ethical Statement: The authors are accountable for all aspects of the work in ensuring that questions related to the accuracy or integrity of any part of the work are appropriately investigated and resolved. The study was conducted in accordance with the Declaration of Helsinki (as revised in 2013). As a retrospective study, the requirement of informed consent was waived. This study was approved by the Institutional Review Board (IRB) of our hospital (ethical approval No. WAGHMEC-KT-2022012).