Nowadays, lung cancer is one of the most common and deadly cancers worldwide. The number of new lung cancer cases has exceeded 2 million and caused more than 1.76 million deaths (1). Surgery is currently the preferred option for early stage non-small cell lung cancer (NSCLC) patients (2).

Since the first report on video-assisted thoracoscopic lobectomy in 1992 (3), video-assisted thoracoscopic surgery (VATS) has become a standard procedure for early-stage non-small cell lung cancer due to its minimal invasiveness and precise resection (4). With the advances in technology and improving surgical proficiency, VATS has gradually evolved from multi-port to single-port thoracoscopic surgery, which reduces postoperative pain and chest wall paresthesia, and shortens hospital stay at the same time (5).

Lobectomy and lymph node dissection was once the gold standard for early-stage NSCLC (6). Today, segmentectomy has been considered for certain cases of stage I NSCLC (7,8). With the help of 3D computed tomographic simulation, single-port VATS segmentectomy has been commonly performed by thoracic surgeons. The traditional incision of single-port VATS segmentectomy is usually made around the anterior axillary line, 4th or 5th intercostal space, for there is less muscular tissue in this area, and the intercostal space is easier to spread. However, the segmentectomy of the left basal segment (S9) and posterior basement segment (S10) performed through this kind of incision is regarded as difficult because the relative spatial position between the incision is around the anterior axillary line and the anatomical structure of S9+10.

The segmentectomy of S9+10 has two surgical approaches in the traditional incision procedure. The first one is starts by separating the dorsal segment and basal segments; the second begins from the inferior pulmonary vein. The latter shows the advantage of protecting the integrity and function of residual lung tissue postoperatively. However, the distance and angle of view of traditional incision make the exposure of inferior pulmonary vein difficult. Besides, exposing the artery and trachea of S9+10 is not easy through traditional incision, and surgeons can only separate the intersegment plane from peripheral to center, which may cause injury to non-target structures, since blood vessels and tracheas are radially concentrated toward the center.

Therefore, we propose another incision to perform segmentectomy of LS9+10, which leads to improved results. According to the stereo structure of thoracic cavity revealed by 3D computed tomographic simulation, we found the key structures of LS9+10 is facing between the posterior axillary line and linea scapularis, 7th to 8th intercostal space. A dorsal incision may overcome the limitations of traditional incision and facilitate the management of trachea and blood vessels of LS9+10, especially pulmonary vein, which is located posterior to the hilum. However, all above are theories waiting to be proved, and there were no studies on the efficacy and safety of dorsal incision reported ever. In this study, we aim to validate the efficacy and safety of dorsal incision, try to facilitate the segmentectomy of LS9+10 and benefit a certain part of NSCLC patients. We present the following article in accordance with the TREND reporting checklist (available at https://jtd.amegroups.com/article/view/10.21037/jtd-22-1202/rc).

The dorsal incision is made behind the posterior axillary line, 8th intercostal space. The length is about 2.5–4 cm (depending on the patients’ body size) (Figure 1). Both the surgeon and the assistant stand on the dorsal part of the patient, and the assistant stands on the head side. Other steps are the same as those in the traditional procedure. 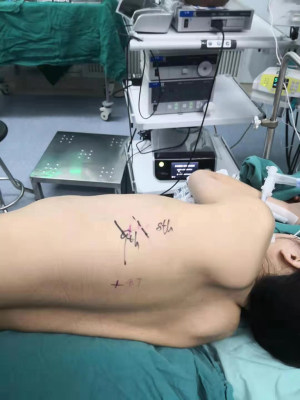 Inclusion criteria of this study: the lesion is ground glass opacity (GGO); solid ingredients is less than 25%; lesion locates at LS9+10, and segmentectomy of LS9+10 could ensure the cut edge (1.5 cm). Exclusion criteria: patients have contraindication of VATS segmentectomy or general anesthesia; segmentectomy of LS9+10 cannot ensure enough cut edge; Patient has a history of tuberculosis, pleurisy or other situation that may significantly increase the difficulty of operation.

Here, we present the detailed steps of a typical LS9+10 VATS segmentectomy with the dorsal incision approach. Firstly, the surgeon cut off the left pulmonary ligament (LPL), then dissociated the inferior pulmonary vein (IPV) to the distal position, and exposed V9+10 (Figure 2). V8 was preserved and V9+10 was cut off. B9+10 was exposed behind the stump of V9+10. In order to avoid damaging B8 by mistake, the surgeon dissociated B9+10 to the distal position, exposed B9 and B10 respectively, and cut off B10 (Figure 3). A9+10 was exposed beside the stump of B10 and cut off. Then, we asked the anesthesiologist to expand the target segment, as after the artery is cut off, the blood flow of pulmonary circulation in the target segment gets blocked, so that the absorption of air inside the target segment will be obviously slower, and the segmental boundaries will show in around 15 min. During this time, the surgeons could continue the operation and did not need to waste time waiting. After A9+10 was cut, the B9 was fully freed and then cut off after finding and confirming the presence of B8 (Figure 4). About 10 to 15 min after cutting A9+10, the segmental boundaries appeared, and ultrasonic scalpel was used to dissociate the intersegmental plane from proximal to distal position (Figure 5). Finally, the LS9+10 was successfully resected through the dorsal incision (Figure 6). 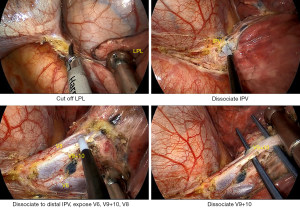 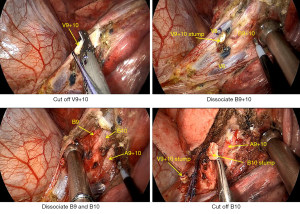 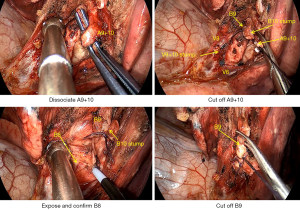 Figure 4 Exposing and cutting off A9+10, then cutting off B9 after finding and confirming the presence of B8. 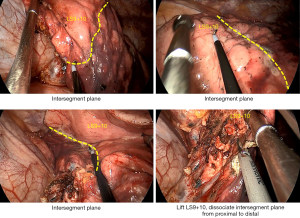 Figure 5 About 10 to 15 min after cutting A9+10, the segmental boundaries appeared, and an ultrasonic scalpel was used to dissociate the intersegment plane from proximal to distal position. 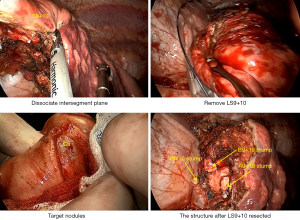 Figure 6 The LS9+10 was successfully resected through the dorsal incision.

A total of 68 patients that matched the inclusion standards were selected, and single-portal VATS segmentectomy was performed.

The baseline and result data

Ground-glass opacity (GGO) as a radiological measure is more and more commonly detected with the popularization of computed tomography (CT) screening, which has resulted in the rising frequency of segmentectomy. This procedure has therefore become a required course for each thoracic surgeon.

The difficulty of segmentectomy differs for each segment. Some segments, such as RS1, LS1+2, LS4+5 and S6, are regarded as “simple segments” for segmentectomy, as their arteries, veins and bronchioles are easy to expose and dissociate. Meanwhile, other segments, especially basal segments are considered as “complicated segments”, as their anatomical structures are complex, and the segmental boundaries are difficult to separate with endoscopic linear cutters. LS9+10 is among the latter type of segments, which is located on the dorsal side of inferior lung lobe, and its vein and bronchiole are also near the dorsal side of lung lobe. Meanwhile, the segmental boundary between LS9+10 and adjacent segments is almost vertical, hence a specific path is needed for endoscopic linear cutters. The segmentectomy of LS9+10 is difficult but necessary. Wedge resection is another approach for sublobectomy. Our team speculated that segmentectomy would show a greater advantage than wedge resection in LS9+10, as wedge resection of LS9+10 would induce more pulmonary surface loss and affect the expansion of residual lung tissue (9).

The traditional incision in VATS is performed on the anterior axillary line and mid-axillary line. The intercostal space here is relatively wide, and the lobes are easier to separate, which means less post-operative intercostal nerve injury. This incision can yield the full exposure of most pulmonary structures but may cause difficulties for LS9+10 segmentectomy, as demonstrated in the introduction part. From traditional incision, V9+10 was difficult to identify, which was easier from dorsal incision. Besides, in order to expose the vein and bronchiole of LS9+10 through traditional incision, the assistant needs to press the lobe hard to the anterior chest wall. It also takes time to separate the segmental boundary of LS9+10, as it forms an angle in the traditional incision. Both key structure exposure and segmental boundary separation are much more easily performed through the dorsal incision. As shown in Figures 2-6, the artery, vein and bronchiole are right beneath the incision and can be seen without pulling or pushing pulmonary tissue. The segmental boundary is actinomorphous from the dorsal incision and easy to dissociate, as stapler was easier to place from this direction. In this study, however, we avoid the use of stapler as we want to exclude the bias caused by stapler: narrow intercostal space of some patients makes the use of stapler more difficult than others, different stapler type may show different performance. The dorsal incision shows significant advantage in the segmentectomy of LS9+10. Although the surgeon had practiced the dorsal incision before the trial, it was not skilled as the traditional incision. Which means, the new incision may show more advantage than the results showed in this article.

However, this incision technique has no benefits for RS9+10 according to the result of our attempt. It seems that the structures of LS9+10 and RS9+10 are similar but not identical. In addition, the assistant of our team was accustomed to stand on the right side of the surgeon, which could cause interfere between the thoracoscope and other surgical instruments and in turn lead to the inconvenience of dorsal incision of RS9+10.

Nonetheless, dorsal incision has certain defects. The intercostal space near the spine is narrow, therefore, surgical instruments will meet more interference through this incision approach. In order to reduce this interference, it will be helpful to employ well-trained surgeons and assistants. Therefore, the dorsal incision needs to be performed with caution for patients whose intercostal space is congenitally narrow, otherwise more postoperative pain may be induced.

Reporting Checklist: The authors have completed the TREND reporting checklist. Available at https://jtd.amegroups.com/article/view/10.21037/jtd-22-1202/rc

Conflicts of Interest: All authors have completed the ICMJE uniform disclosure form (available at https://jtd.amegroups.com/article/view/10.21037/jtd-22-1202/coif). The authors have no conflicts of interest to declare.

Ethical Statement: The authors are accountable for all aspects of the work in ensuring that questions related to the accuracy or integrity of any part of the work are appropriately investigated and resolved. The study was conducted in accordance with the Declaration of Helsinki (as revised in 2013). The study was approved by institutional ethics committee of Cancer Hospital of The University of Chinese Academy of Sciences (Zhejiang Cancer Hospital) (No. IRB-2021-1) and informed consent was taken from all the patients.