The first known chest wall resection was reported in the 18th century (1). Up to this day, many different reconstructive techniques have been described. However, reconstruction of the bony chest wall is controversial. Decision about which defects have to be reconstructed and what is the optimal prosthetic material is a disputed issue (2-8). However, there is agreement that high rates of postoperative complications associated to resection is a common concerning point. Indeed, the overall complications rate has been found above 40% (9) and 30-day mortality from 0% to 17% (10-16). Respiratory complications, continue to be the most frequent, and are reported in 20% to 24% of the patients (1). Only sporadic reports focusing on quality of life and postoperative pulmonary function exist (17,18). Although, there are no enough data to draw firm conclusions, is not unreasonable to imagine the possible relation between functional results and rigidity associated to different reconstructive techniques, especially for large size defects. Functional results, may be determinant for postoperative clinical outcomes and quality of life. In this case, starting from preoperative computerized tomography (CT), the ribs involved were delimited and resection was planned. Based on 3D titanium-printed technology, in a forward step from previous reported custom-made prosthesis, we designed an exact copy of this part endowing a novel dynamic system for sternochondral junctions. Hence, the most anatomical and physiological prosthesis ever made to this day was implanted in this patient. Clinical and functional outcomes were examined.

A 57-year-old man was referred to our department after suffering a minor thoracic trauma, because prolonged chest pain. CT scan showed a chest wall tumor of 75×50×42 mm3 with lysis of the 5th rib in the chondrocostal junction (Figure 1). Positron emission tomography (PET) was compatible with malignant tumor. Transthoracic needle aspiration biopsy was made with anatomicopathological diagnosis of chondrosarcoma. Pulmonary function test showed a FVC (L) 5.57 (106%); FEV1 (L) 4.48 (112%). 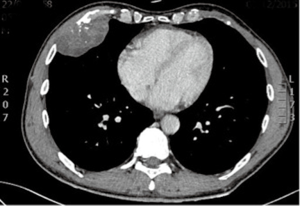 Multislice CT Computed tomography images were obtained by using a 64 detector CT scanner while the patient was in supine position. By software InVesalius, an exact copy of not only the damaged but also superior and inferior ribs and sternum was digitally created by a specialized company (ACV. EXTERNAL SL. Madrid) (Figure 2). Then, a digital 3D implant was designed endowing a specific dynamic system to simulate natural chondrosternal articulations. After approval by surgical operator, the digital model was transferred to 3D printer (ARCAM Q10), working by Electron beam melting or EBM, that is a type of additive manufacturing that is classified as a power bed fusion technique, in which an electron beam melts titanium powder ayer by layer in a high vacuum, achieving full melting of the metal powder. The implant final size was: 147.36×180.14×128.30 mm3. 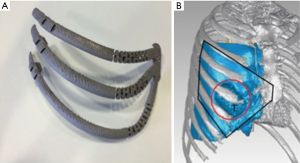 The incision was made over the 5th rib. According to the planned strategy, 4th to 6th ribs and the corresponding hemisternum was resected. Frozen section analysis of margins confirmed all margins were tumor free. A polypropylene mesh was placed and sutured under the prosthesis. The fixation of the implant, was achieved with titanium wire and fixing screws in the residual sternum, and clips for costal endpoints (Figure 3). 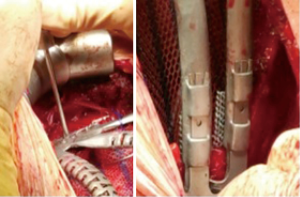 Figure 3 Fixation to the sternum and costal endpoints.

Histopathological examination confirmed the diagnosis of chondrosarcoma. The extent of the tumor in the surgical specimen was 80×50 mm2. The final stage was established according to the TNM classification T1N0M0 and differentiation grade was G2. The resection margin was confirmed as negative with a margin higher than 4 cm.

The patient was controlled on an outpatient setting weekly. No major or minor complications were detected after three months of following. On the 4th week after operation a pulmonary function test was made: FEV1(L) 3,670 (92%), FVC(L) 4,620 (88%). The patient returned to his normal activity in six weeks without suffering any kind of sequel or restriction. The CT scan on the 8th week showed a complete adaptation (Figure 4).

The majority of thoracic wall defects result from the surgical resection of malignant tumors. Chondrosarcomas are the most common skeletal malignancies of the thoracic wall (19) with considerable rates of recurrence. The convenient wide extension of resection is an important factor for recurrence. The most common complication, especially in cases of wide chest wall resections, is mainly respiratory. The major leading factor for respiratory complication is flail chest (20). Whit a view to prevent it, many prosthetic materials have been used for reconstruction. Polypropylene or Polytetrafluoroethylene (PTFE) provides non rigid reconstruction, while methyl methacrylate or titanium represents rigid rebuilding. Although has been described that for small defects there is no difference between rigid and no rigid reconstruction, larges resections (above 250 mm2) as frequently needed for chondrosarcomas and about all, if sternum is implicated, needs to be manage with rigid materials.

Most modern chest wall resections approaches, have been based in custom made titanium implants, manufactured by selective laser sintering (SLM) or, in the latest step, by 3D printed technology. However, all of them provide an ergonomic but rigid reconstruction that lead to limit respiratory and thoracic movements having an impact in postoperative quality of life.

With the goal of minimize the inconvenient associated to current rigid implant, we decided to go a step forward from others custom made prosthesis in two ways: firstly, moving from mere custom made implant, to an exact replica of the removed specimen; secondly, endowing an innovative dynamic system to simulate chondrosternal articulations.

This 100% personalized dynamic implant provides a very fast adaptation, decreasing surgical time, and allowing the maximum postoperative movement capacity. These advantages may play an important role in pain-related breath limitation, prevention of postoperative complications, as well as better recovery and quality of life. In this sense, the case presented in this report, had a very god postoperative pain control just with NSAID, having no any postoperative complication, and returning to normal activity in six weeks. The FVC and FEV1 values were 88% and 92% respectively of expected values on the 4th postoperative week showing a very fast recovery.

In conclusion, new designs show a great promise in regard to the large chest wall resections surgeries, although long term outcomes and side effects have yet to be seen.