In the European Union, trauma is the most frequent cause of death in the population between 15 and 45 years (1). It is estimated that about 25% of traumatic deaths are secondary to thoracic injuries (2) and blunt chest trauma is associated with a higher mortality rate than penetrating chest injuries (3-5).

Generally patients with severe chest injuries are treated with supportive measures and only a minority of these patients need urgent thoracotomy (5-8). According to the “damage control” strategy, pneumonorrhaphy and tractotomy are treatments of choice (9-11); pulmonary resections, including wedge resection, lobectomy and pnemonectomy, are necessary in selected cases (6,8,12). Currently, the survival of patients that underwent major lung resections performed for thoracic trauma is very low and the mortality rate associated with lobectomy reaches 60% (4,5).

We report three cases of urgent thoracotomies with inferior lung lobectomies for blunt chest trauma without mortality and with postoperative complete restoration of respiratory function.

Over a 2-year period [2013–2014], 210 patients with chest trauma were hospitalized at Manzoni Hospital-Lecco: 158 (75.2%) in the Department of Surgery and 52 (24.8%) in the Intensive Care Unit. Mean age was 42.3 years (range: 3–84); 176 (83.8%) patients were males and 34 (16.2%) females. Mechanism of injury was blunt in 204 (97.1%) patients while penetrating in 6 (2.9%). In 42 (20%) cases, there were concomitant extrathoracic lesions. In 48 (22.8%) patients was necessary a ventilatory support and 37 (17.6%) patients were treated with thoracostomy tube. Nineteen (9%) patients needed urgent thoracotomy: 4 (1.9%) cases for penetrating injury and 15 (7.1%) cases for blunt trauma. In the blunt group 5 pneumonorrhaphies, 5 wedge resections, 3 lobectomies, and 2 rib fixings with concomitant hematoma evacuation were performed; in the penetrating group 2 myocardial wound repairs and 2 tractotomy were performed. Three (1.4%) patients treated with urgent thoracotomy required concomitant laparotomy for intra-abdominal injuries. The mortality rate was 1.4% (3 patients): 2 (0.9%) patients with penetrating myocardial wounds and 1 (0.5%) patient with associated abdominal trauma. We describe the clinical course of 3 female patients treated with anatomical pulmonary lobectomies. All patients gave written consent for the publication of personal data. 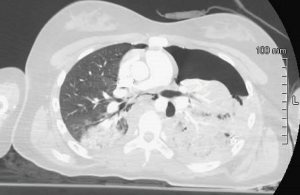 No post-operative complications were observed. Spirometry performed four months after surgery demonstrated no functional deficit with complete recovery of respiratory function in each patient.

The majority of patients with blunt chest trauma are managed non-operatively by supportive measures and tube thoracostomy; thoracotomy is required in only 7–10% of cases (5-8).

The “damage control” strategy has been applied also to lung injuries: simple and rapid surgical treatments not involving pulmonary tissue resection have been developed for reducing operative times and decreasing blood loss in patients with metabolic damage (9-13). Consequently, pneumonorrhaphy and tractotomy are the surgical techniques preferred in chest trauma (7,9). Pulmonary resections are needed in 17% of patients that underwent urgent thoracotomy for blunt chest trauma and range from wedge resection to pneumonectomy (5). In case of extensive injuries involving major hilar vessels or bronchi, an anatomic pulmonary resection is necessary (6,8).

Overall mortality rate after major pulmonary resections for trauma is very high and increases with the presence of multivisceral injuries, the severity of hypovolemic shock and the extent of lung resection (4,5,7,12). In multicenter series, the mortality associated with lobectomy ranges from 35% to 43% and in case of pneumonectomy varies from 50% to 62% (4,5). The low survival rate associated with major lung resections may be partly explained by the frequent association with extrathoracic multivisceral injuries (5). However the multivariate analysis of two large multicenter series demonstrated that the extent of lung resection is an independent predictive factor for intrahospital mortality in patients with thoracic trauma (4,5).

Early diagnosis and consequent specific interventions are fundamental issues in traumatic injury of the lung (14). CT scan plays a key role in the management of chest trauma and it has a considerable impact on the following therapeutic decisions (14). The introduction in the clinical practice of multidetector CT allows rapid and complete definition of all lesions in polytrauma patients (15). Multidetector CT scan can be performed right after the primary survey without any complications and it can be repeated subsequently if the patient’s conditions are worsening (14,15).

The delay of the surgical treatment is one of the most important factors influencing negatively the outcome of these patients (3,8). Hypovolemic shock, massive hemothorax with chest tube output greater than 1,500 mL and not controlled airway leak are the standard indications for urgent thoracotomy in blunt chest trauma (3,6-8). For reducing mortality, some authors suggest to perform urgent thoracotomy when the output of thoracostomy tube reaches 1,000 mL (8). In patients with massive hemothorax for blunt chest trauma, the surgical hemostasis must to be achieved quickly: pneumonorrhaphies and wedge resections are preferred but if more conservative interventions do not control hemorrhage, anatomical lobectomy must be performed without delay (6,8). The duration of surgery seems to influence the outcome of patients with lung injuries (16). In a series the mean operative time of conservative treatments (tractotomy) was 2.3 hours, while the mean operative time of anatomic resections (lobectomies and pneumonectomies) was 4.7 hours (7): the disparity of mortality between conservative and non-conservative lung resections for traumatic lesions may be related to the difference in the length of surgery.

In our series the operative time was shorter (2.7 hours) compared to that present in the literature: lobectomies were carried out by two expert thoracic surgeons (GV, MC) of our surgical team that routinely perform elective pulmonary surgery.

In chest trauma anterolateral thoracotomy in the supine position is the more frequently used approach because it permits a fast access to the contralateral hemithorax with a clamshell incision (11,12). Posterolateral thoracotomy is employed in stable patients with injuries localized to one hemithorax: this incision permits a wide exposure of the hilum and the inferior lobe (6,8,12). In unstable patients it is preferable to intubate with a single-lumen endotracheal tube while in relatively stable patient a double lumen intubation allows selective pulmonary exclusion (6,8,12).

We used posterolateral incision with a double lumen intubation in relatively stable patients (patient 2 and patient 3) with preoperative CT negative for contralateral thoracic injuries: the wide surgical field allowed us to perform a rapid assessment of traumatic injuries and a timely operative hemostasis.

The present series is too small to draw any definitive conclusions. Major lung resections are performed rarely in chest trauma but are associated with a high mortality directly related to the extent of resection and extra-thoracic injuries. A fast diagnosis and timely intervention are the keys to success in trauma patients. No major morbidity, including complete functional respiratory recovery, reflects the young age of our patients and intensive postoperative rehabilitation. The absence of mortality in this series may be related to prompt diagnosis, short operative time, and absence of associated severe neurological or abdominal injuries.