Pulmonary vein anomalies are uncommon with variations occurring in <2% of people (1,2). The incidence of partial anomalous pulmonary venous drainage (PAPVD) of the left upper lobe is occasionally associated with cardiac abnormalities including mitral stenosis, pulmonic stenosis, and a patent ductus arteriosus (3). Thoracic surgeons, pulmonologists and radiologists should be aware of these aberrations for diagnostic and therapeutic purposes.

The patient is a 64-year-old previous smoker who had a routine chest radiograph following a fall. She was noted to have a 2-cm left upper lobe pulmonary nodule on a trauma chest X-ray. A transthoracic needle aspirate revealed cells consistent with a non-small cell carcinoma. Staging evaluation did not note any metastatic disease. Preoperative echocardiography demonstrated a left ventricular ejection fraction of 70% without evidence of ventricular hypertrophy, atrial enlargement or valvular stenosis. The patient underwent a robotic-assisted left upper lobectomy. Intraoperatively, the patient was discovered to have an anomalous venous drainage from the left upper lobe (Figure 1). Following careful isolation and division of this vessel, she had an uneventful left upper lobectomy. Her post-operative course was uncomplicated, and her final pathology demonstrated a 2.3-cm invasive pulmonary adenocarcinoma with no lymph node involvement and no other congenital abnormalities in the lung. The initial computed tomography scan was without contrast, thus the presence of an anomalous superior pulmonary vein was not noted but was identified on re-review postoperatively (Figure 2). 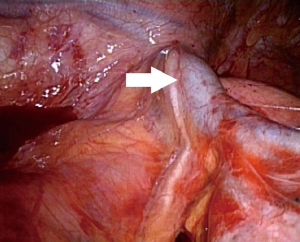 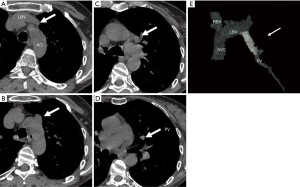 The prevalence of anomalous pulmonary venous return in people is unknown, and most patients are discovered to have this congenital abnormality incidentally. In autopsy studies, the incidence of PAPVD is 0.4–0.7% (4). These anomalies are normally right-sided (90%) (5). The paucity of literature suggests that perhaps PAPVD is either overlooked or misdiagnosed.

In a PAPVD of the left upper pulmonary lobe, the aberrant vein returns oxygenated blood from the left upper lobe to the left innominate vein. This, in turn, drains into the normally positioned superior vena cava to the right of the aortic arch. Thus, this circulation pattern creates the potential for changes in the pulmonary to systemic blood flow ratio. Due to the lack of systemic delivery of oxygenated blood from the left upper lobe, the individual is chiefly dependent on the right lung and left lower pulmonary lobe for peripheral gas exchange.

Knowledge of PAPVD of the left lung is essential if the right lung presumed to be the lung with normal function becomes impaired as a result of surgery, lung disease, or injury (2). The presence of a PAPVD of the left upper lobe results in a left to right shunt, which may ultimately become significant for a patient who undergoes a right pneumonectomy. As a consequence, only the left lower lobe would contribute to the systemic oxygen supply. In such a case, a shunt may become clinically relevant, and this may require repair via a left thoracotomy. Another potential indication for repair would include enlargement of the right heart chambers in order to decrease the likelihood of developing heart failure from pulmonary vascular disease.

This study is supported by Department of Surgery, University of Pennsylvania School of Medicine, Philadelphia, PA, USA.