Pseudochylothorax (PCT) is a rare form of pleural effusion (PE), also called chyliform or cholesterol PE, and is characterized by its high cholesterol content and milky pleural fluid (PF). PCT and chylothorax both classically have a turbid or milky appearance due to their high lipid content. Apart from that, their etiologies, pathogenesis, and clinical implications differ, making it important to distinguish between them (1).

The most frequent causes of PCT include tuberculosis (TB), rheumatoid arthritis (RA), paragonimiasis, echinococcosis, neoplasia, or trauma (2). The pathogenesis of PCT has never been investigated in depth. However, the presence of an effusion for at least 5 years in the setting of a fibrous, thickened pleura due to chronic pleuritis is characteristic (2,3). It is believed that, as a result of the pleural thickening that blocks the drainage of fluids to the pleural wall lymphatic system, the cholesterol and lecithin-globulin complexes liberated after red cell and neutrophil lysis in the PF become trapped in the pleural cavity. In fact, some authors consider the PCT as a form of “lung entrapment” in the context of chronic inflammation (1). The diagnosis of PCT is established by the evaluation of the PF: milky PE, cholesterol level greater than 200 mg/dL, triglyceride level typically below 110 mg/dL [always with a cholesterol/triglycerides ratio (CHOL/TG ratio) >1], and often with cholesterol crystals seen on microscopy (1,4,5). The initial step in the management of PCT is treatment of the underlying disease process, which is usually benign. Additional components of the management approach, such as therapeutic thoracentesis and decortication, depend on the severity of the patient’s respiratory symptoms, degree and pattern of impairment in pulmonary function tests, and the ability of the lung to re-expand.

Despite these data, there are no sufficiently large series describing its features, and our aim was to document its etiology and behavior in these patients, as well as evaluate the PF analysis and the outcomes by presenting a systematic review.

This systematic review employed a methodology based on the principles of the Preferred Reporting Items for Systematic reviews and Meta-Analyses (PRISMA) study (6). As there were not enough large series that responded to the needs of the study, the cases described in the literature were added using this methodology.

All cases of any age published in any format were deemed eligible for inclusion, except abstracts of papers presented at conferences, and editorials, reviews, or letters to the editor that did not document new cases.

The search strategy included several sources of free databases available by the year of publication, although the full text of the study had to be in English, French, or Spanish. The literature search included the following electronic databases (online): Medline (through PubMed interface), and Scopus. Searches were conducted between 1 November and 31 November 2015. The following search terms were adopted for each database: pseudochylothorax OR cholesterol pleural effusion OR chyliform pleural effusion.

In addition to the electronic data bases consulted, a manual search was performed on the reference lists of the included articles. Any studies fulfilling the above criteria were included. Each article was then independently screened and assessed, and potentially relevant ones identified. Studies were reviewed in three stages, based on the title, abstract, and then full text, with consensus sought at each stage of review.

Because the articles reviewed were mostly case descriptions, their quality was not assessed in relation to the assessment of study type, internal validity, generalizability, heterogeneity, or precision.

Outcomes of interest were to know the patient demographic data, associated diseases, causes of PCT, biochemical and cytological characteristics of the PE, and the response to various treatments.

Due to the wide heterogeneity and descriptive nature of the studies, a simple descriptive statistic (proportion, median and range) of each outcome of interest was calculated.

Sixty-two studies (2,3,7-25) involving 104 patients (26-50) were selected for review (51-66). Figure 1 presents a flowchart for the complete breakdown in the identification of appropriate studies corresponding to isolated case reports and a retrospective series (35). 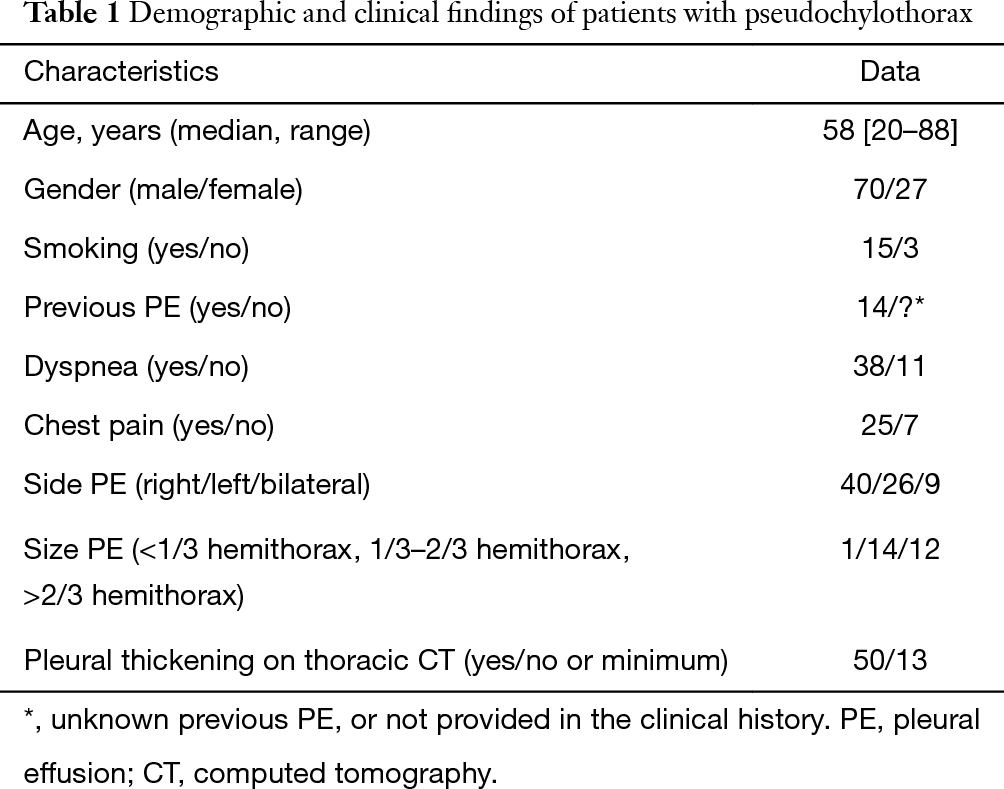 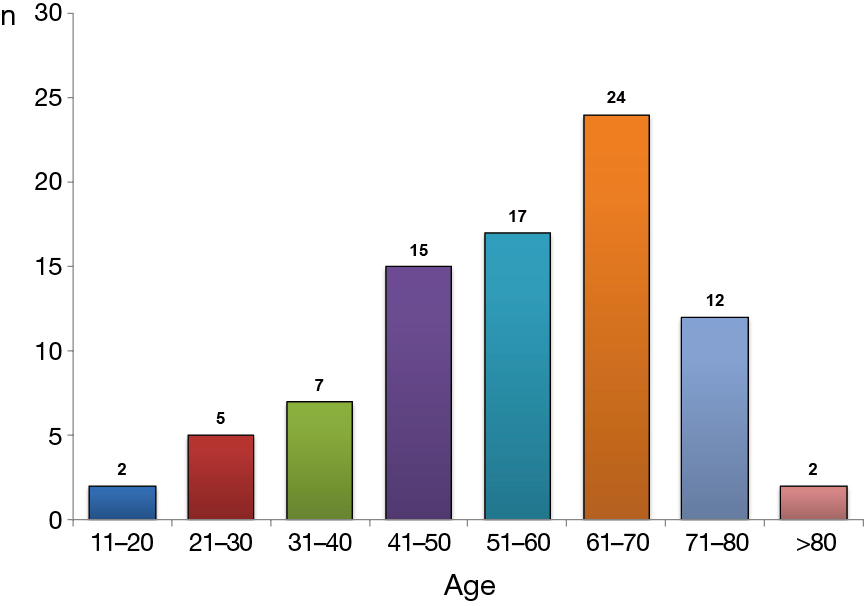 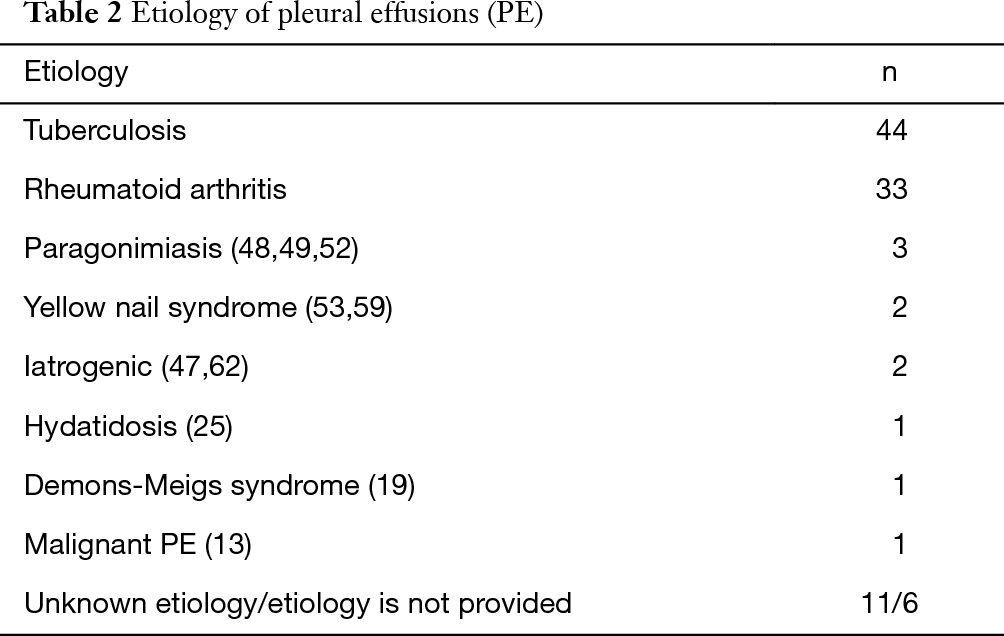 Figure 3 Pleural biopsy (PB) findings according to the etiology of pleural effusion (PE).

Table 4 summarizes the most frequently used treatments (medical treatment, therapeutic thoracentesis, decortication/pleurectomy, pleurodesis, chest drainage, and thoracoscopic drainage, among others), as well as the outcomes (favorable: total or partial control of PE or its symptoms; unfavorable: no control of PE, recurrence of symptoms). Other treatments were ovarian tumor surgery in a patient with Demons-Meigs syndrome (19), and pneumonectomy in another patient (46), both with a favorable response. Although nine patients did not receive treatment, seven (77.8%) had a favorable outcome (2,20,34,35,37). The reported complications following diagnostic procedures were empyema in eight patients (2,18,38,46,57,64), and bronchopleural fistula in two (35,46). 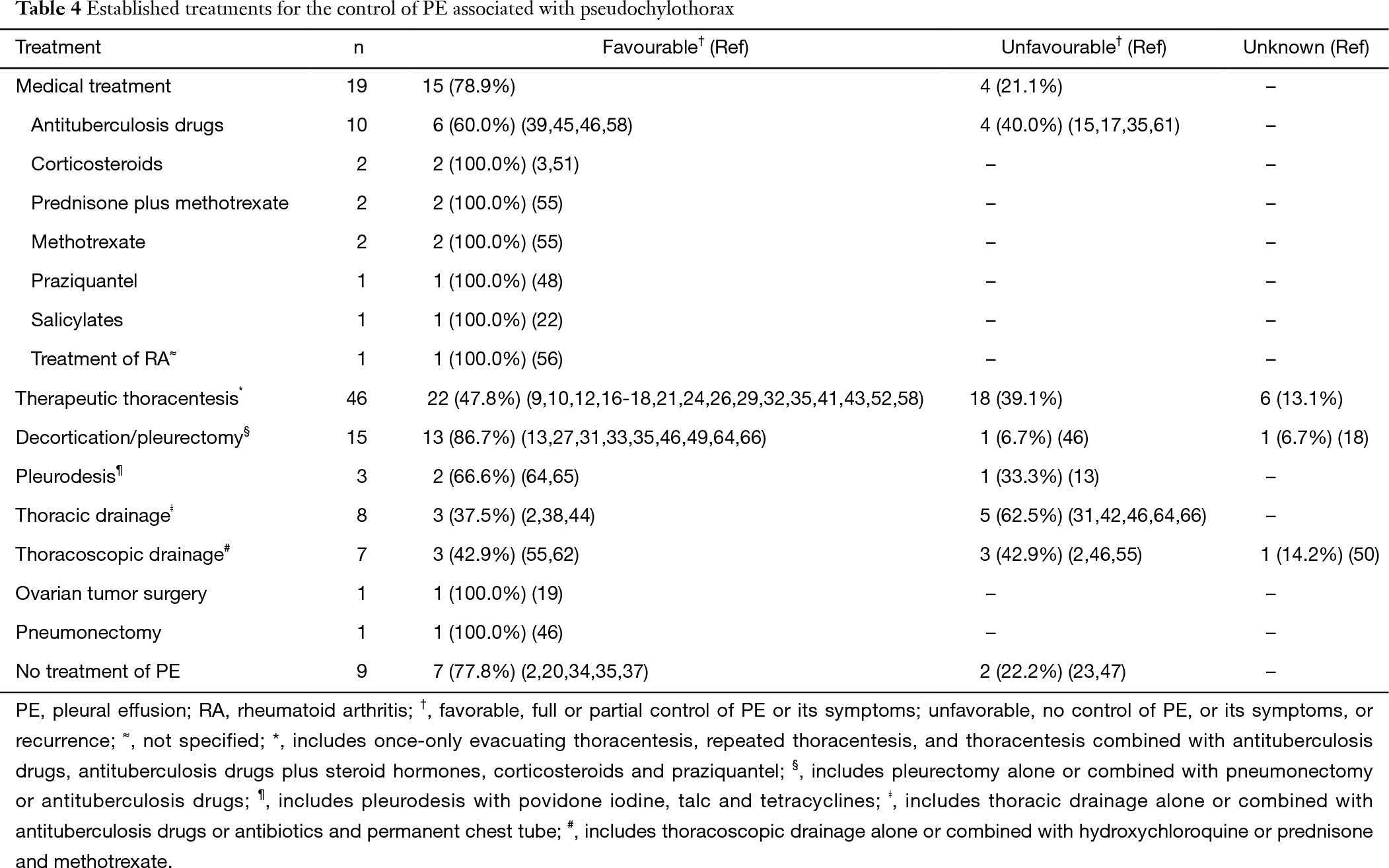 Publications on PCT involve isolated case reports and a small series (35), so key issues such as clinical course, characteristics of PE or the most effective treatments are not well known. These questions were addressed using a systematic review of the literature relating to this disease.

It was classically considered that the pleural thickening “retained” the cholesterol and the lecithin-globulin complexes liberated after red cell and neutrophil lysis in the PF, on blocking the drainage of fluid to the pleural wall lymphatic system. It is possible that this may be the cause in those patients that had presented with a previous PE, but the finding that 20% of the PCT do not involve pleural thickening, implies that other pathogenic mechanisms must be involved.

The terms “milky”, “cloudy”, “opaque”, etc., used to describe the characteristic appearance of PCT, can be interpreted as similar. However, serous (23), or bloody (33) fluids have been described in which the absence of the typical appearance of PCT does not exclude the diagnosis.

PCT are exudates, with a low count of nucleated cells (84.6%, <5,000 cells/mm3) and usually lymphocyte-predominant (61.1%) (Table 3). The characteristics of PF analysis are representative of a pleural space inflammation (87.5% of cases have an LDH >800 IU/L), as well as of increased capillary permeability or lymphatic dysregulation (98.3% of cases with proteins >3 g/dL). Moreover, glucose and pH values are generally less than 60 mg/dL (90.7%) and 7.35 mg/dL (64.7%) respectively. Cholesterol values >200 mg/dL, triglycerides <110 mg/dL, CHOL/TG ratio >1 and the presence of cholesterol crystals in PF were classically considered as useful tests for the diagnosis of PCT. However, 25.7% of the cases have cholesterol levels <200 mg/dL, and another 25% with triglycerides values >110 mg/dL, thus these determinations do not appear to be conclusive by themselves. A CHOL/TG ratio >1 (97.4%) and the presence of cholesterol crystals (89.7%) is more sensitive. This systematic review is not designed to establish the specificity of any test but, as far as the authors know, the specificity of the CHOL/TG ratio and cholesterol crystals is currently reported as being 100%. The PF culture may be useful in the diagnosis of PFs of tuberculous origin (positive in the 34.1% of cases), unlike PB, which was only positive in one patient (29). In general, the findings of PB have little relevance, except in the specific cases shown in Figure 3. Therefore, its role seems limited to a subset of patients that is not suspected RA or TB, but the diagnosis of a PCT is not yet clear. In the case that showed a pleural metastasis due to a lung adenocarcinoma, cholesterol crystals were also observed in the PF (13).

The management of PCT is not well defined thus far. Experts recommend a sequential approach by treating the underlying cause first (4). If the patient has symptoms or the PE increases, invasive techniques may be resorted to (depending on the complexity) in order to control the symptoms produced by a recurrent symptomatic PE (67). The most frequently used treatments are therapeutic thoracentesis (46 patients; alone or combined with medical treatment or another type of intervention), medical treatment on its own (19), and decortication/pleurectomy (15) with a favorable response from 47.8%, 78.9%, and 86.7%, respectively (Table 4). It is worth mentioning the high number of unfavorable outcomes with TB treatment (40%), although in at least two patients the treatment prescribed was not that currently recommended (15,17). Although it is classically said that PCT usually have a favorable outcome, the therapeutic thoracentesis, the pleurodesis, the thoracic drainage and the thoracoscopic drainage (all of them using their different methods) showed a high percentage of unfavorable outcomes (39.1%, 33.3%, 62.5% and 42.9%, respectively). Decortication/pleurectomy only had a poor outcome in one patient (6.7%) and it was necessary to perform a pneumonectomy (46). On the other hand, favorable outcomes have been reported (stabilization of symptoms and the size of the PE, and even a spontaneous improvement of the PCT) without having received any type of treatment (2,20,34,35,37). However, the favorable results, possibly very optimistic, should be interpreted with caution, since in the majority of these studies they were associated with various treatments and, sometimes it is difficult to know to which one the favorable outcome was due. Furthermore, the follow-up period was generally short in the majority of cases. Moreover, interventional procedures are not exempt from complications, such as empyema and bronchopleural fistulas (2,18,35,38,46,57,64).

Our review has some limitations. The most important was the reliance on descriptions of case reports, instead of case series or comparative trials. Therefore, the evaluation of the quality of the reported literature could limit internal validity, generalizability, and accuracy. In addition, some articles highlight the clinical characteristics of the patients, while others stress diagnostic and therapeutic aspects. Due to the heterogeneity of the reported information, it is not possible to provide the details required, making it difficult to correctly classify some effusions or evaluate the response to a particular treatment. As in all rare disease, the publication bias would be another limitation to consider since the successfully treated cases or atypical cases are more likely to get published.

In summary, the mechanism by which a PCT is produced is not sufficiently clear. They are effusions that are more common in males, and its origin is usually TB or AR. It is not unusual to find a history of a previous PE recorded in the clinical notes, and the lack of pleural thickening does not rule out the diagnosis. PE is usually unilateral, and the PF is an exudate of milky appearance in which the CHOL/TG ratio is almost always >1, and cholesterol crystals are usually observed. The culture may be useful for the TB diagnosis and the PB does not usually provide useful information except the observation of cholesterol crystals in some cases. Finally, the treatment must be sequential, treating the underlying cause in the first place and, afterwards, assessing the need to resort to interventionist techniques (starting with the least invasive) in order to control the symptoms of the patient, and also taking into account that these are not exempt from complications.