Esophageal cancer (EC) is the eighth most common malignancy and the fifth leading cause of cancer in males worldwide (1,2). Each year, about 300,000 people died from EC on earth and the half of those patients were Chinese (3). The prognosis of EC patients is much poor with a 5-year overall survival (OS) rate of 15–39.2% (4). Surgical resection has been the standard treatment for localized EC. Some studies have reported that the prognosis of EC is associated with several clinicopathologic characteristics, including pathological stage, lymph node metastases, lymphovascular invasion, and positive esophageal proximal resection margin (ERM+) status (3-5).

ERM+ following esophagectomy was considered as incomplete or R1 resection. The clinicopathological data and long-term prognosis of EC patients with ERM+ after esophagectomy were still seldom analyzed. The incidence of ERM+ was reported mostly between 2.9% to 12%, even up to 31.3% reported in certain study (6). Microscopic identification of residual tumor at the proximal or distal esophageal proximal resection margin (termed as R1) increases the risk of recurrence and disease-related mortality. In order to reduce the incidence of ERM+, many studies (1) had explored the therapeutic strategies including preoperative evaluation, preoperative neoadjuvant therapy and postoperative adjuvant treatment and salvage esophagectomy. Markar et al. (7) showed that neoadjuvant chemoradiotherapy did significantly improve survival of patients with ERM+, and reduced distant tumor recurrence but failed to significantly influence locoregional control of the disease. Song et al. (8) showed that patients with margin involvement yielded long term survival by postoperative radiotherapy, suggesting a potential role of postoperative radiotherapy, especially for patients with margin involvement. Morita et al. (9) showed that salvage esophagectomy should be considered carefully for recurrent cancer patients in whom complete resection can be achieved.

However, each research above has different localization. These issues remain to be resolved, such as: risk of ERM+, importance of remedial measures and significance of postoperative radiotherapy and chemotherapy. These questions badly needed strong evidence to elucidate. Therefore, we conducted this retrospective study aiming to explore these questions. As a retrospective study, we did not do special pertinence measures according to these patients, only to analysis current situation. The aim of this study is to assess the clinical significance of ERM+ and its therapeutic option.

The patients’ data for this study was collected from the EC database of our hospital from November 2008 to December 2014. This study was approved by the Ethics Committee of West China Hospital (No. 201649). In that period, 3,594 patients with histologically confirmed EC underwent radically intended resection in our department. ERM+ was defined as carcinoma or atypical hyperplasia (severe or moderate) at the residual esophageal margin after surgery. All patients with ERM+ had been followed-up in this study. For comparison, we had successful followed up 3,308 patients (93.0%) in the other patients with negative esophageal proximal resection margins (ERM−). From these data, we chose suitable patients to comparing with patients with ERM+ by specific propensity matching method as a ratio of 1:2 (10).

All the patients enrolled in the study met the following criteria: (I) pathologically confirmed thoracic squamous cell carcinoma; (II) all pathological specimens were examined by two independent pathologists, at least one being a senior gastrointestinal pathologist; (III) patient’s demographic and tumor related data were collected; (IV) and complete information was available for stage grouping. ERM+ was defined as carcinoma or atypical hyperplasia (severe or moderate) at the residual esophageal margin in our study.

All patients were followed up by telephone or interview at a 3-month interval for the first postoperative 2 years, at 6-month intervals for the following 3 years, and then annually thereafter. Survival time was measured from the operation date to the date of death or last follow-up. The last general follow-up of survivors was done at the end of December 2015.

Statistical analysis was carried out by using SPSS version 16.0 software. Continuous variables are expressed as the mean ± standard deviation and categorical variables as percentage. A Mann-Whitney U test was used for intergroup comparisons of continuous variables, whereas a Chi-square test was used to compare categorical data. OSs, data had been presented as the median for survival, were estimated using the Kaplan-Meier method. The log rank test was used to compare survival curves. On the other hand, we carried out a propensity score matching analysis to compensate for the differences in baseline characteristics between the ERM+ and ERM− groups in the assessment of relevant outcomes. We matched each ERM+ recipient to two ERM− recipients with similar covariates, represented as propensity scores. Variables used in our model for estimating propensity scores included sex, age, operation time and TNM staging. All statistical tests were 2-sided with the threshold of significance set at a P<0.05.

Patient characteristics and results of propensity-matched

In this study, there were 37 patients who had ERM+. For comparison, 74 patients with ERM− were propensity-matched at a ratio of 1:2 as control group according to sex, age, operation time and TNM staging (Table 1). 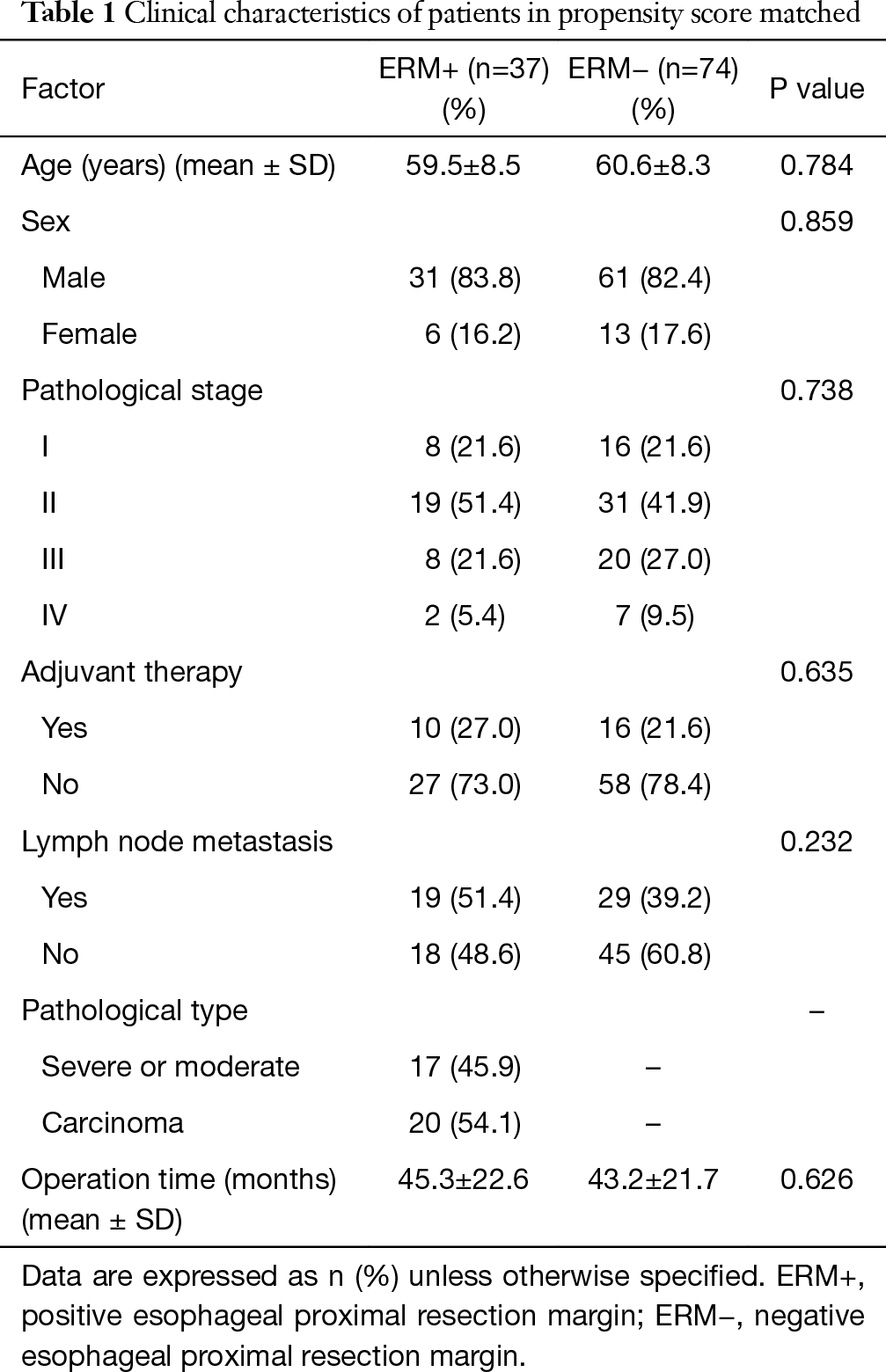 In this large cohort of patients, 3,594 patients with histologically confirmed EC underwent radical intent resection in our department. Among them there were 37 patients who had ERM+. The rate of ERM+ was 1.03%. The median survival time was 35 months in patients with ERM+, significantly worse than the survival time of 68 months in those with ERM− (Chi-square =4.064, P=0.044) (Figure 1). 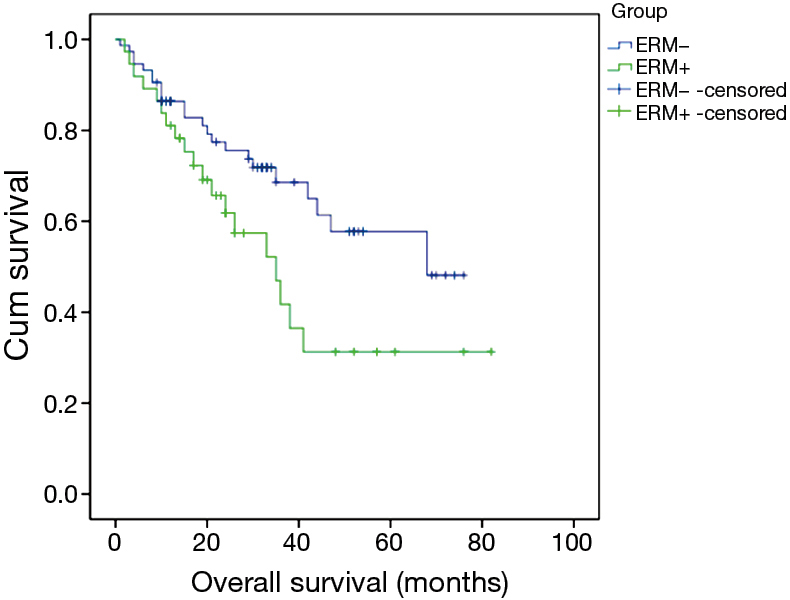 In this study, patients with ERM+ were divided into two subgroups [carcinoma: ERM+ 1, atypical hyperplasia (severe or moderate): ERM+ 2]. There was no survival difference between these two groups (Figure 2). 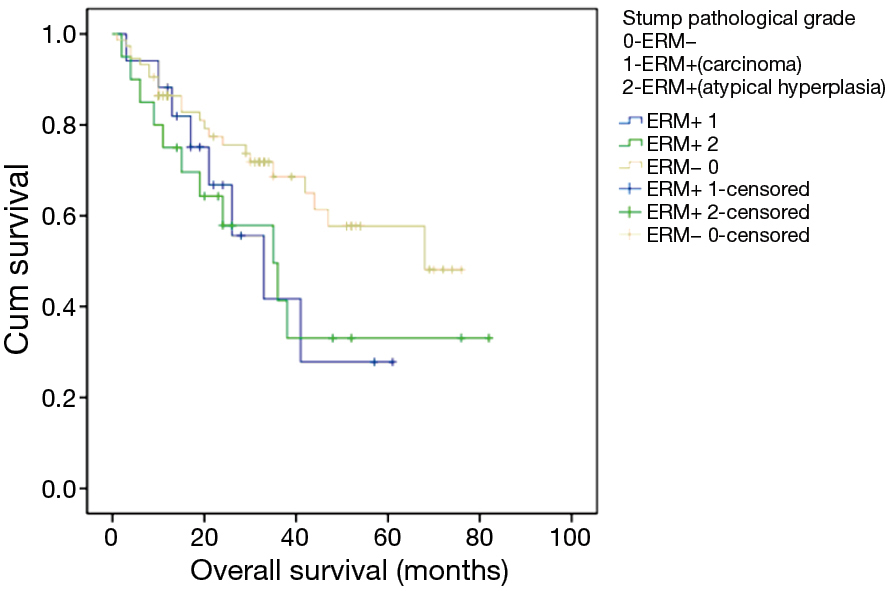 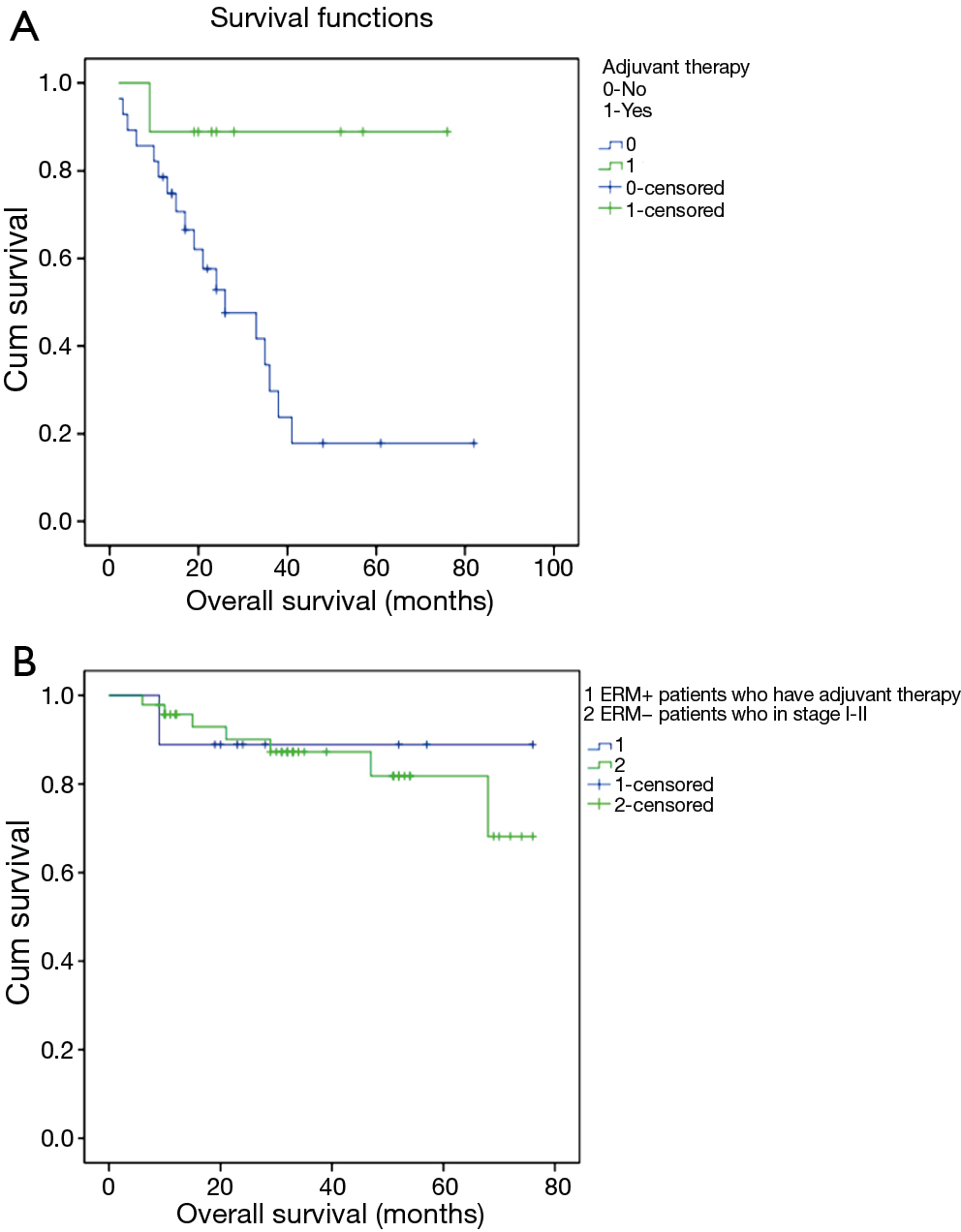 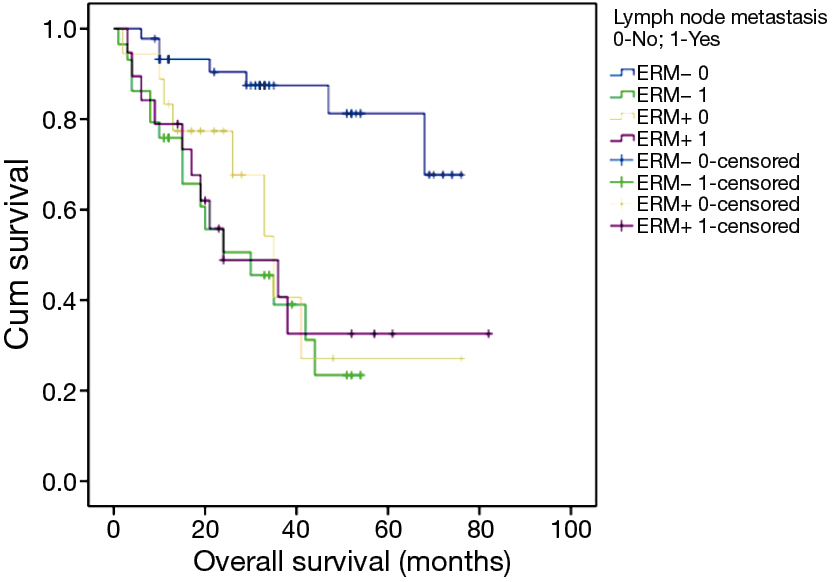 Survival rate in stage I–II was higher than that in stage III–IV (Chi-square =27.598, P=0.000) in ERM−; but there was no difference between the same two subgroups of patients in ERM+ (Figure 5). 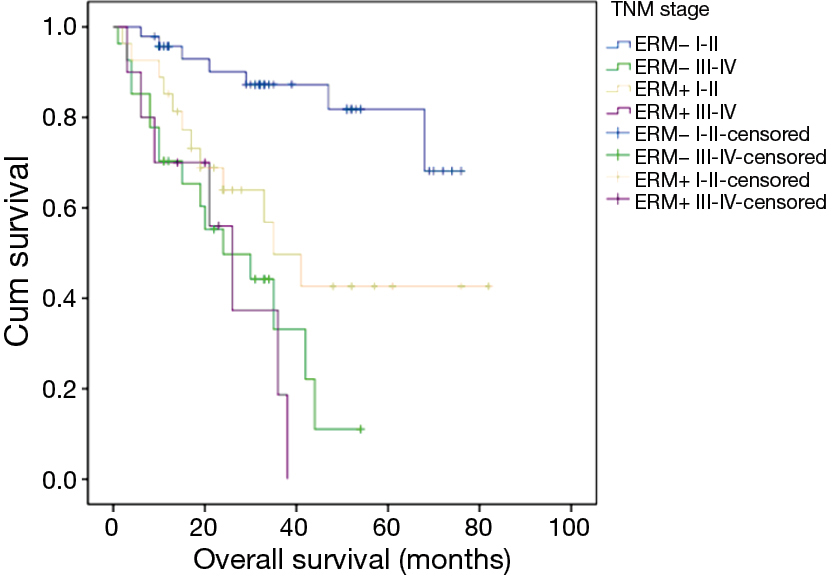 In this study, ERM+ is an important prognostic factor (P=0.003) for patients and adjuvant therapy (P=0.001) too. However, no significance was found about lymph node metastasis, stump histological grade in this multivariate analysis about patients with ERM+ (Table 2, Figure 6). 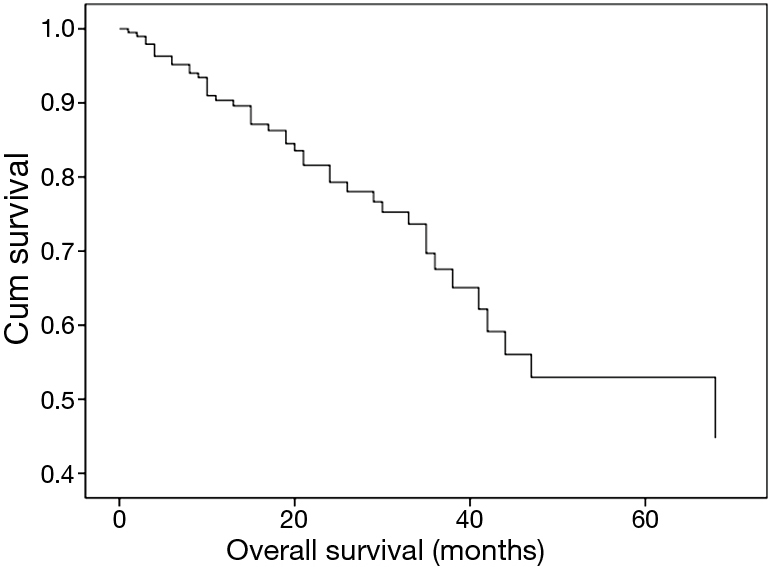 EC is found to have geographic differences in occurrence rate. China has a high incidence of EC in the world, with 15 million people died of EC each year (11). The 5-year survival rate of patients with EC after esophagectomy is low although many progresses have been made in treating EC. The main factors affecting the long-term survival of patients with EC were postoperative local recurrence and distant metastasis. A number of studies (11-13) have shown that the main prognostic factors for postoperative EC patients’ local control and survival is the depth and breadth of invasion as well as the type of the esophagectomy. ERM+, also an important factor, followed by esophagectomy was considered as imcomplete or R1 resection. ERM+ is inevitable in certain surgery. In this study, 3,594 patients with histologically confirmed EC underwent radical resection in our department. Among them there were 37 patients with ERM+. The rate of ERM+ was 1.03%. This lower incidence can be accepted digitally. The median survival time was 35 months in the ERM+, significantly lower than survival time of 68 months in the ERM− (χ2=4.064, P=0.044). Obviously, there was a difference statistically significant between the two groups. Therefore, ERM+ in nowadays is rare but still an important prognostic factor for patients with EC undergoing esophagectomy. Cao et al. (14) and Watanabe et al. (15) reported that resection margin invasion were independent predictors of a poor prognosis. A large multicenter European study (7) provided evidence to support the notion that R1 resection margin, as microscopic residual tumor present at the vertical or circumferential resection margins of the surgical specimen, was a prognostic indication of aggressive tumor biology with a poor long-term prognosis. In this study, the median survival reached 35 months which seems not to be so poor status and not an evil result for patients with ERM+. We have also analyzed the situation of these patients in the subgroup in further.

In the past half century, many scholars had reported that increasing the length of resection even total esophagectomy could decrease the occurrence of residual stump lesions (16). However, it can not be achieved to resect the enough length because of the location of EC. So we need to understand the influences of various factors, such as ERM+, stump pathological grade, adjuvant therapy, lymph node metastasis, TNM stage and age, for the EC recurrence and survival. For example, the main factors influencing the survival of EC patients with ERM+ were the depth of tumor infiltration, histological classification, lymph node metastasis and radical or conservative resection (17). Another example showed that tumor length, number of metastatic lymph nodes, stump pathological grade and treatment modality were important prognostic factors for patients with ERM+ (14). And invasion depth, stump pathological grade and treatment modality were important influencing factors for locoregional control.

The AJCC TNM staging system has been widely used to stratify patients and select treatment strategies. Due to a relatively small sample size, we only divided the cases into two subgroups (stage I–II and stage III–IV). Survival rate in stage I–II was higher than that in stage III–IV (Chi-square =27.598, P=0.000) in ERM−; but there was no difference between the two subgroups of patients in ERM+. Another same phenomenon was that lymph node metastasis did not significantly influence the survival of patients in ERM+; However, we saw a different result for patients in ERM− (Chi-square =18.197, P=0.000). Some research suggests that advanced T and N stage are the risk factors of residual cancer after esophagectomy in the patients with squamous cell carcinoma of the esophagus (18). Other research suggest that positive nodal status (P=0.002; HR 2.730) were independent predictors of a poor prognosis (21). Combined with our research, depth of tumor invasion and lymph node metastasis are the important component for determining tumor stage. Although these two factors are the main determinants causing different survival in ERM− but they did not show the same effect in ERM+. This may suggest that ERM+ plays more important role for determining survival than those factors of T and N stage.

In addition, it should be mentioned that age is not the key contraindication for the operation along with the improvement of surgical technique. Whether ERM+ or ERM−, there was no significant difference comparing patients with an age of ≥60 years with those with an age of <60 years in our study. This suggests that age is not an important factor in survival.

Ethical Statement: The study was approved by the Ethics Committee of West China Hospital (No. 201649).