Community acquired pneumonia (CAP) is one of the most common reasons for physician referrals and hospitalizations all around the world. Influenza and CAP were the cause 56,832 deaths in 2013 and were reported to be the eighth leading cause of mortality in the United States (1). According to the World Health Organization (WHO), lower respiratory tract infections (LRTIs) including CAP presented with 429.2 million episodes of illness worldwide which accounts for 94.5 million Disability Adjusted Life Years (DALYs). Its annual death rate among adults older than 59 years is 1.6 million (2). In most surveys the incidence is found to be increased by aging (3).

Although CURB-65 criteria and PSI have been developed to assess the severity of CAP and help predict prognosis of the patients, these determinants seem to be insufficient and the American Thoracic Society (ATS) Consensus Guidelines have suggested application of other criteria as well (10). Therefore, major efforts have been made to discover prognostic factors and predictors of severity. As for CAP multiple factors including procalcitonin, platelet, Copeptin, ProANP, etc. have been assessed (11,12). Among these factors PaCO2 is less well studied and needs further investigations. In this study, we investigated the prognostic value of on-admission PaCO2 in patients hospitalized with CAP.

From March 15, 2013 to April 2015, through a prospective cohort study, patients with CAP, admitted to a referral general Hospital of Tehran University of Medical Sciences were encompassed. The inclusion criteria were as follows: aged equal or over 18 years, definite diagnosis of CAP during hospitalization (based on clinical and imaging findings), arterial blood gas (ABG) report conducted on a sample obtained in the first 2 hours and before the intubation, if performed sent without delay to laboratory (13). Patients were excluded if they had: recent hospitalization with possibility of hospital acquired pneumonia; on admission intubation; ABG obtained after two hours of admission; ABG obtained while the patient was on supplemented oxygen.

Baseline characteristics of the subjects were recorded at the time of admission: (age, gender), comorbid conditions such as chronic obstructive pulmonary disease (COPD), congestive heart failure (CHF), history of malignancy and chronic kidney disease (CKD), physiologic indices such as respiratory rate (RR), heart rate (HR), systolic blood pressure (SBP) and temperature (T), lab test results blood urea nitrogen (BUN) and arterial pH. Meanwhile, radiologic findings (infiltration, pleural effusion) were documented for each subject. PaCO2 was also measured for each subject in an arterial blood sample drawn in the first 2 hours, the patients were followed for 30 days and PaCO2 relation with three major outcomes (ICU admission, duration of admission and 30-day mortality) were investigated. Severity of the illness was also calculated for each subject based on the CURB-65 criteria, (score from 0 to 5 was assigned to each patient). Confusion, BUN >19 mg/dL, RR ≥30, SBP <90 mmHg or DBP ≤60 mmHg and age ≥65 years were the main components comprising the total score.

The study was approved by the Ethics Committee of Tehran University of Medical Sciences (approval number: 24118).

Data analysis was performed by SPSS 18.0 for windows (SPSS Inc., Chicago, IL, USA). Descriptive statistics were calculated and presented for each variable. To assess the relations between qualitative variables Chi-squared test was used. t-tests and one way ANOVA were also utilized for quantitative variables. A P value less than 0.05 and 95% confidence interval were considered significant. 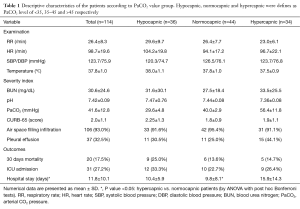 Table 1 Descriptive characteristics of the patients according to PaCO2 value group. Hypocapnic, normocapnic and hypercapnic were defines as PaCO2 level of <35, 35–45 and >45 respectively
Full table

Patients were categorized into three groups of hypocapnic (less than 35), normocapnic (35 to 45) and hypercapnic (more than 45) based on their PaCO2. Detailed descriptive statistics for these groups are also presented in Table 1.

There were no significant difference between PaCO2 value (40.1±14.6 vs. 41.9±12.4 mmHg; P=0.54), and arterial pH (7.4±0.1 vs. 7.4±0.1; P=0.68) among the group with 30-day mortality and those who survived. However, BUN level (P<0.01), CURB score (P<0.01) and the rate of ICU admission (P<0.01) were significantly higher among those who died within 30 days. The mean age of the 20 patients who expired in 30 days was also significantly higher than the subjects who survived (P=0.01). Among comorbid conditions, only CHF had a significant relation with mortality and its prevalence was significantly higher among the deceased subjects (P<0.01). The rate of associated pleural effusion was also more frequent among the patients who expired in 30 days (P=0.04). Regarding the ICU admission, PaCO2 level was also not significantly different (P=0.86) in patients who were admitted to ICU (41.3±16.2 mmHg) and those who were treated out of ICU (41.84±11.83 mmHg). Malignancy was the only comorbid condition that was significantly more prevalent among ICU admitted patients (P<0.01). Higher CURB scores were found to be significantly correlated with ICU admission (P<0.01) and pleural effusion was more frequently found among these patients (P=0.03). A longer duration of admission was also observed in ICU admitted subjects (P<0.01).

There is little data regarding the prognostic importance of PaCO2 in the first 24 hours in hospitalized patients with CAP (14-16). By considering the mortality and ICU admission in this study, PaCO2 was not found as a powerful risk factor. However, hypercapnic subjects were hospitalized the longest and the duration of hospitalization was also longer among hypocapnic patients compared to normocapnic subjects. These results remained consistent even after excluding COPD patients from analysis. The similar findings were found when analysis was done by considering normal values of PaCO2 for the city of Tehran that has been shown to be lower due to its altitude (1,190 m above the sea level) (M=38.5±2.7, f=36.2±2.4), in comparison with cities at the sea level (17).

In this study, CHF, higher levels of BUN, higher CURB-65 scores, pleural effusion in chest X-ray and ICU admission were all significant prognostic factors of higher mortality risks. Patients with lower pHs and pleural effusions were hospitalized longer than the others.

As mentioned above, considering the outcomes, only the duration of hospitalization had a significant relation with the level of PaCO2. The relation between mortality and PaCO2 was analyzed twice. First, no significant difference were found between mean values of PaCO2 among those who expired within 30 days and those who did not (P=0.54). Second, the rates of mortality were compared between the three groups of patients regarding their PaCO2 levels (hyper/normo/hypocapnic). The results were similar and no significant difference was found.

In this regard, inconsistent results have also been reported by other studies. In 2014, Bertsias et al. assessed the burden of CAP in adults aged ≥50 years in Greece and reported that the duration of hospitalization was longer among females, in the winter season, with associated malignancy and with PaO2 ≤58.8 mg/dL (18). Although their study did not point to PaCO2, those with on-admission tachypnea had more prolonged hospitalization period (P=0.05).

Consistent with our findings, Vicco et al. that evaluated 272 CAP patients, reported that age, white blood cell counts, serum urea levels and DBP were significantly related to mortality of CAP patients. Similar to the results of our study, the PaCO2 value was not significantly different between the group of patients who died of CAP and those who survived (19).

By a post-hoc analysis of two different prospective studies, Burri et al. assessed the value of ABG analysis in patients with acute dyspnea and found a significant relation between ICU admissions, in-hospital and 30-day mortality with lower pH. Higher PaCO2 level was also associated with more ICU admissions (20). However in separate analysis for 94 CAP patients in their study, they only found the hypoxemia as a significant prognostic predictor in this subset of patients.

In contrast to findings in these studies, by a retrospective cohort study and after adjusting for severity of illness, Laserna et al. reported that hypocapnic and hypercapnic patients had a higher 30-day mortality rate, (OR =2.84; 95% CI, 1.28–6.30) and (OR =3.38; 95% CI, 1.38–8.30) respectively. Both of these two groups also had a higher need for ICU admission compared with normocapnic subjects. These researchers concluded that PaCO2 should be considered as an important variable in severity stratification of CAP patients (16). However, in contrast to our study, their investigations were retrospective. Sin et al. evaluated the relation between arterial CO2 with in-hospital mortality rate in CAP patients and declared that in both patients with hypocapnia and hypercapnia, the in-hospital mortality rate was greater than the normocapnic subjects. Incongruent with the results of our survey, these researchers stated that measurement of PaCO2 adds prognostic value and should be used for risk-stratification of in-hospital CAP patients (15).

In another study Hoogewerf et al. described four factors of PaO2 <60 mmHg, pH <7.35, RR >30 and CHF to be prognostic factors in clinical failure of CAP patients (21).

In 2013 Gates et al. evaluated the effects of hypercapnia in mice with pseudomonas pneumonia. They discovered that hypercapnia can impair the function of lung neutrophils (22). In their previous study they had found that an increased PaCO2 level can inhibit phagocytosis by macrophages and prevents synthesis of proinflammatory cytokines TNF and IL-6 by these cells, which may play important roles in host defense system (23). The latter was also reported by earlier studies as well (24-26). In their in vivo experiments they also reported increases in bacterial load and mortality associated with elevated PaCO2 levels (22).

In the previous guidelines developed by the ATS in 2001, PaO2 <60 mmHg, PaCO2 >50 mmHg and pH <7.35, as the parts of the Pneumonia Patient Outcomes Research Team (PORT) (27) were reported to be associated with increased morbidity and mortality in CAP patients (9); However in the last updated guideline by ATS/Infectious Diseases Society of America (IDSA), there is not a distinguished place for PaCO2 in the criteria for severe CAP (10). In this regard, the British Thoracic Society guidelines for the management of CAP considered the CURB-65 as useful severity assessment (28). These recommendations are consistent with findings in our study which despite the significant association between CURB-65 criteria and mortality/ICU admission, no such association was found by considering PaCO2.

There are some limitations in our study. By the fact of limited number of patients, monocentric design in this study, large controlled studies are required in this regard. Meanwhile a significant number of patients were excluded in our study due to factors such as unsatisfactory technique of ABG, taking ABG after 2 hours of presentation or equivocal diagnosis of pneumonia that could affect final results. We also didn’t evaluate the value of serial PaCO2 level regarding response to treatment that could be helpful in monitoring the response to treatment. An adjusted analysis of PaCO2 for co-morbid disease and for special pathogen as a cause of CAP that didn’t consider in our study could be subjected for future prospective studies. There are also other specific complications of CAP that didn’t address in current study including: empyema, acute respiratory distress syndrome (ARDS), septicemia or psychosocial problems. Large controlled studies are recommended to declare the relation of prognostic indexes such as PaCO2 with these complications.

Among the three outcomes of 30-day mortality, the need for ICU admission and the duration of hospitalization, the level of PaCO2 was a predictable factor only for the latter one. While awaiting larger prospective studies regarding the usefulness of on admission PaCO2 as a prognostic factor, use of multifactorial indexes such as CURB-65 is still recommended.

Funding: This study has been aided by a grant from the Tehran University of Medical Sciences (grant number: 92-03-30-24118).

Conflicts of Interest: The preliminary results of this study were presented at ERS congress on September 2014 in Munich, Germany.

Ethical Statement: The study was approved by the Ethics Committee of Tehran University of Medical Sciences (approval number: 24118) and written informed consent was obtained from all patients.