A 65-year-old female patient was admitted due to “cough and expectoration for one week”. A computed tomography (CT) scan showed patchy shadow on the apical segment of the right upper pulmonary lobe, and therefore a peripheral pulmonary tumor in the right upper lobe was considered (Figure 1). Under the general anesthesia with double lumen tube, the patient underwent complete video-assisted thoracic surgery (VATS) for her right upper lung tumor on July 16, 2012 (Video 1). The patient was asked to take a left lateral position. A 1.5-cm incision was made at the seventh intercostal space on the right middle axillary line as the observation port, and two 2.5-cm incisions were made at the fourth intercostal space on the anterior axillary line and at the ninth intercostal space at the subscapular angle as the operation ports. She recovered well after surgery. The post-surgical pathology showed no metastasis was seen in 9 lymph nodes (at the hilum of lung, inferior pulmonary ligament, near the lower trachea, before esophagus, and subcarinal), and the right upper lung adenocarcinoma (moderately differentiated) invaded the lung membrane, whereas no tumor was visible at the bronchial stump. 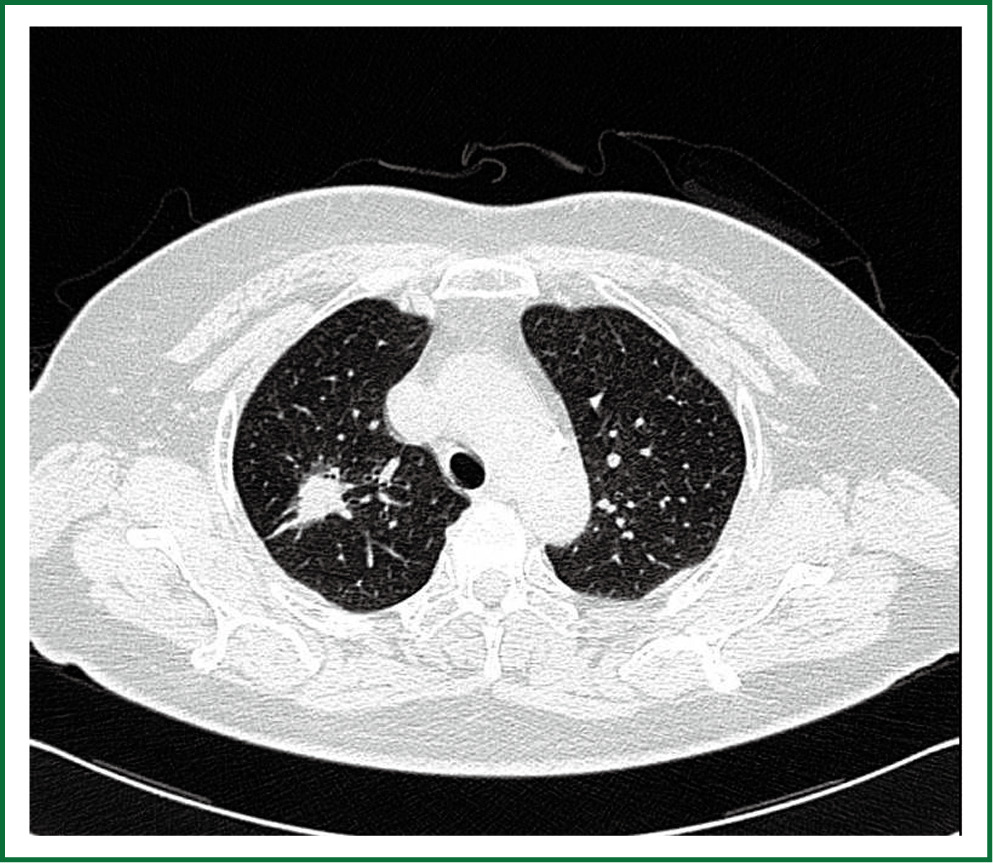 VATS was introduced in early 1990s, and the first VATS lobectomy was completed in 1992. In the past decades, this minimally invasive technique for lung resection has gradually being accepted, and has been cited in the US NCCN clinical practice guidelines for the surgical treatment of early lung cancer. However, the full thoracoscopic resection of lung cancer remains challenging. Most surgeons still use small auxiliary incision(s) (sometimes also by bracing the ribs) to complete the so-called VATS lung cancer resection. In our current patient, we simplified the surgical procedure and thus lowers its difficulty. First, point-blank operation enables the thorough exposure of the surgical field. Meanwhile, the intrathecal separation of vessels achieves the skeletonization of vessels. This step facilitates the safe handling of the vessels and meanwhile is helpful for the lymph node dissection, because the lymph nodes are often tightly adhered with the vascular sheath but seldom invade the intrathecal structures. Second, we improved the surgical procedure by using a single direction, in a backward manner, the right superior pulmonary vein, pulmonary artery at the apical segment, bronchus in the right upper lung, posterior segment of pulmonary artery, and poorly differentiated pulmonary fissure are handled in sequence, which simplifies the surgical operation and lowers its difficulty.