A lesson from intravascular imaging: insights for recognizing a spontaneous coronary artery dissection

Spontaneous coronary artery dissection (SCAD) is still today an underdiagnosed disease that occurs in 0.1–1.1% of the major angiographic series and represents 0.1–4% of all acute coronary syndrome (1-3). Nevertheless, these findings are still today sorely underestimated due to the absence of angiographic hallmarks in more than 70% of cases (4). According to the Literature, in several cases, an intravascular imaging, namely optical coherence tomography analysis (OCT) and intravascular ultrasound images (IVUS), is mandatory for recognize a dissection (3-7).

Recently the spotlights were turned on for this entity thanks to the initiatives of European and American societies of cardiology through proper study groups. In this light, we have launched an Experts’ survey whose results should be published very soon (8).

With this in mind, we have greatly appreciated the effort of this Journal to pay attention to this underdiagnosed entity (9), in this light we recently published an intriguing score system for a faster and efficient SCAD diagnosis (10).

Here we present an emblematic case of a 58-year old, smoker, male admitted at our department for unstable angina (UA). ECG and echo did not show abnormalities. Coronary angiography (CA) not showed stenosis of right coronary artery (RCA) but a retrograde flow to middle left anterior descending artery (LAD) (Figure 1A). Left coronary selective angiography showed a small haziness image at the ostium of the LAD, mimicking a coronary calcification (11), and a significative stenosis, a little further down, at the middle tract (Figure 1B). 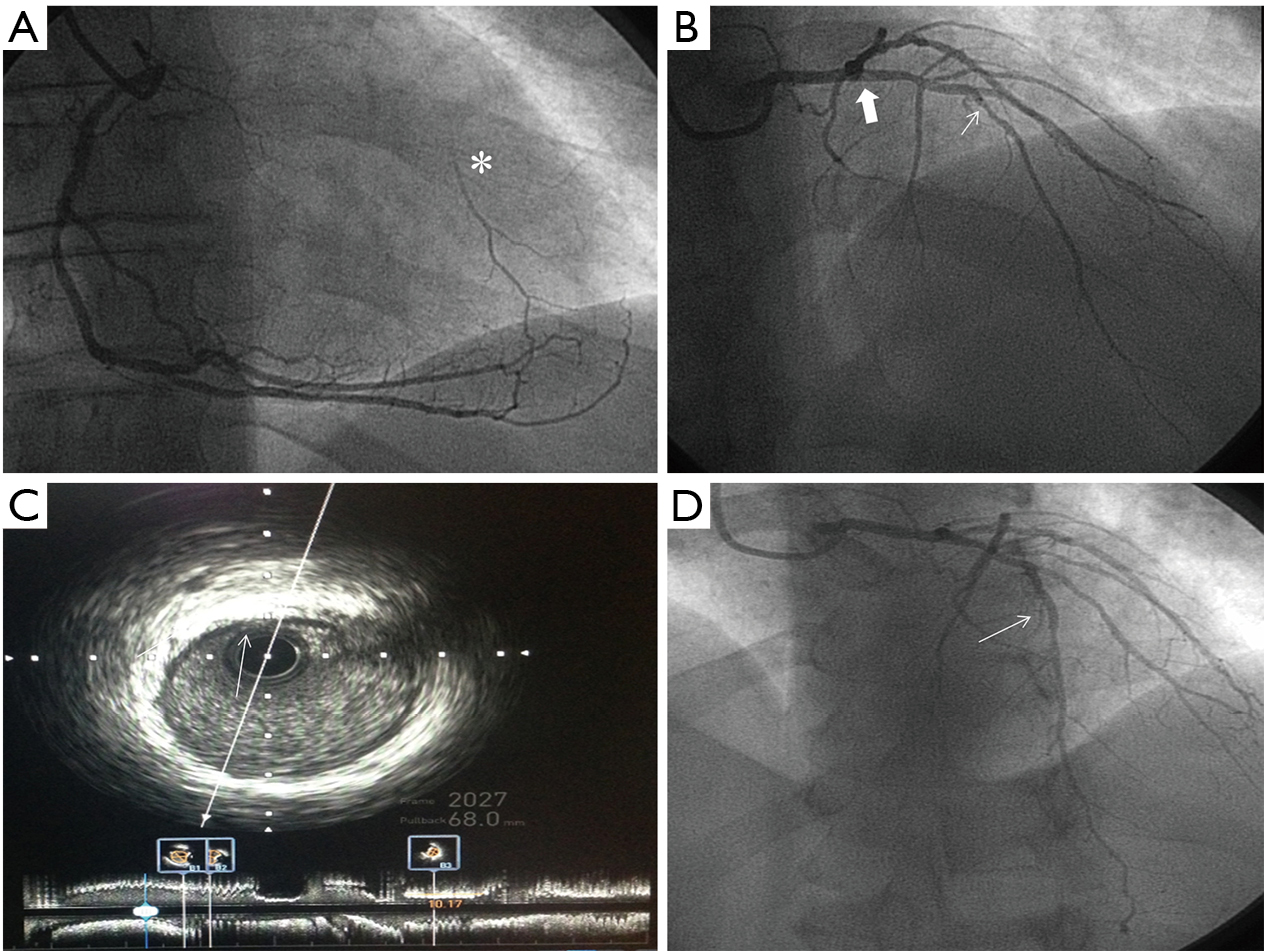 With these premises we performed an intravascular ultrasound analysis (IVUS) that showed a 30% stenosis at proximal tract without a clear image of dissection (Figure 1C), so we decided to position a drug-eluting stent (DES) at mid-LAD with a good final result (Figure 1D). The patient was discharged after 2 days in optimized medical therapy.

After 5 days the patient came back to hospital with angina pectoris and pain radiating up to the neck due to a newer non-ST-elevation myocardial infarction (NSTEMI). Thus we performed a new CA that showed an image mimicking a “vasospasm” suspected for SCAD at distal RCA (Figure 2A,B), moreover, an inexplicable coronary collateral circulation to distal RCA from distal LAD was highlighted (Figure 2C). 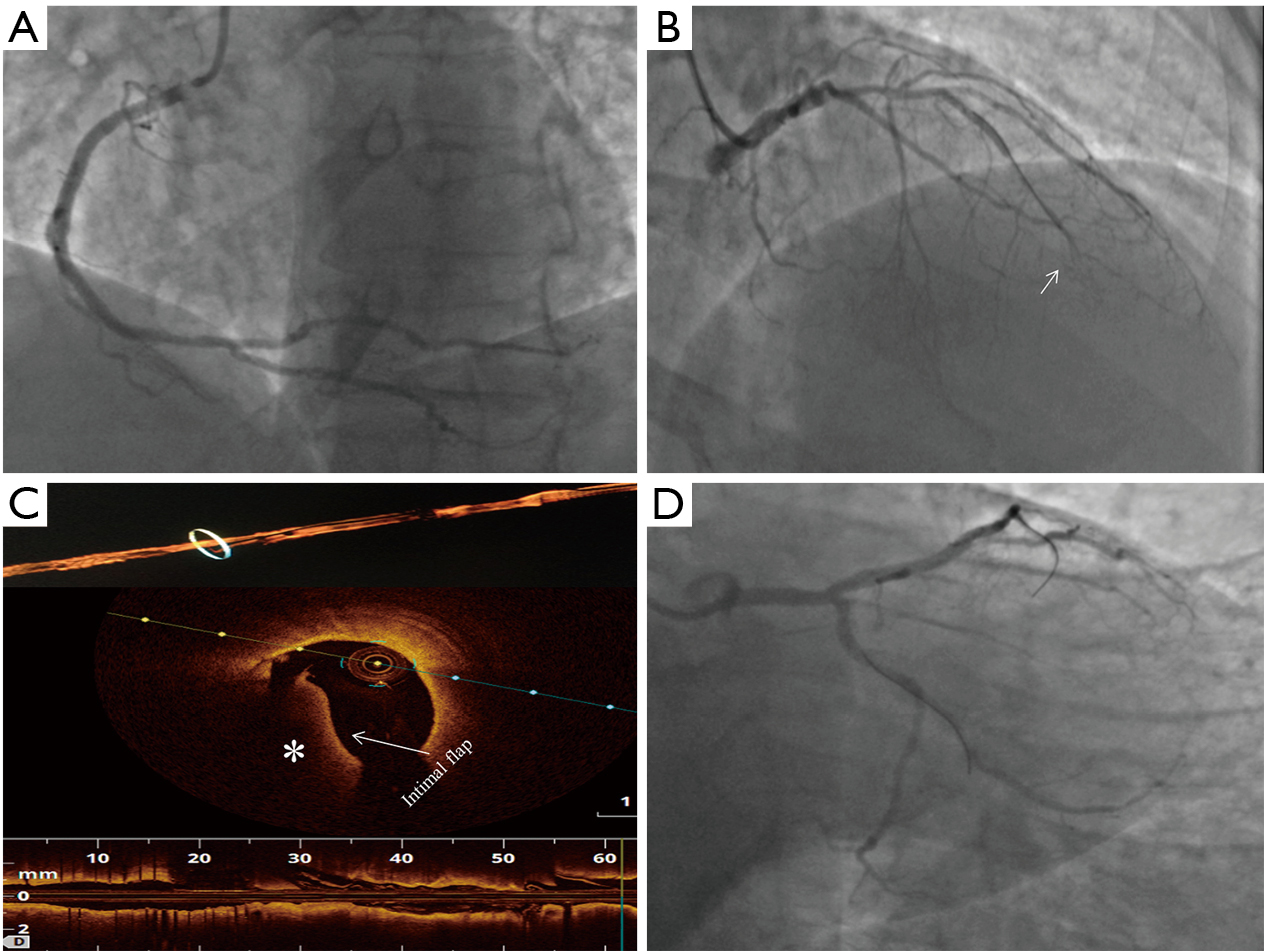 After administration of intracoronaric the image of SCAD was strongly suspected through the pathognomonic morphology of parallel double-lumen with contrast dye separated by a radiolucent flap (Figure 2B) but, according to our score (10), we decided to perform an OCT. The endovascular technique has confirmed our suspicion of SCAD starting from distal and arriving at the ostium of the RCA (Figure 2D). So we implanted 3 DES in overlapping with a good final result (Figure 3A). 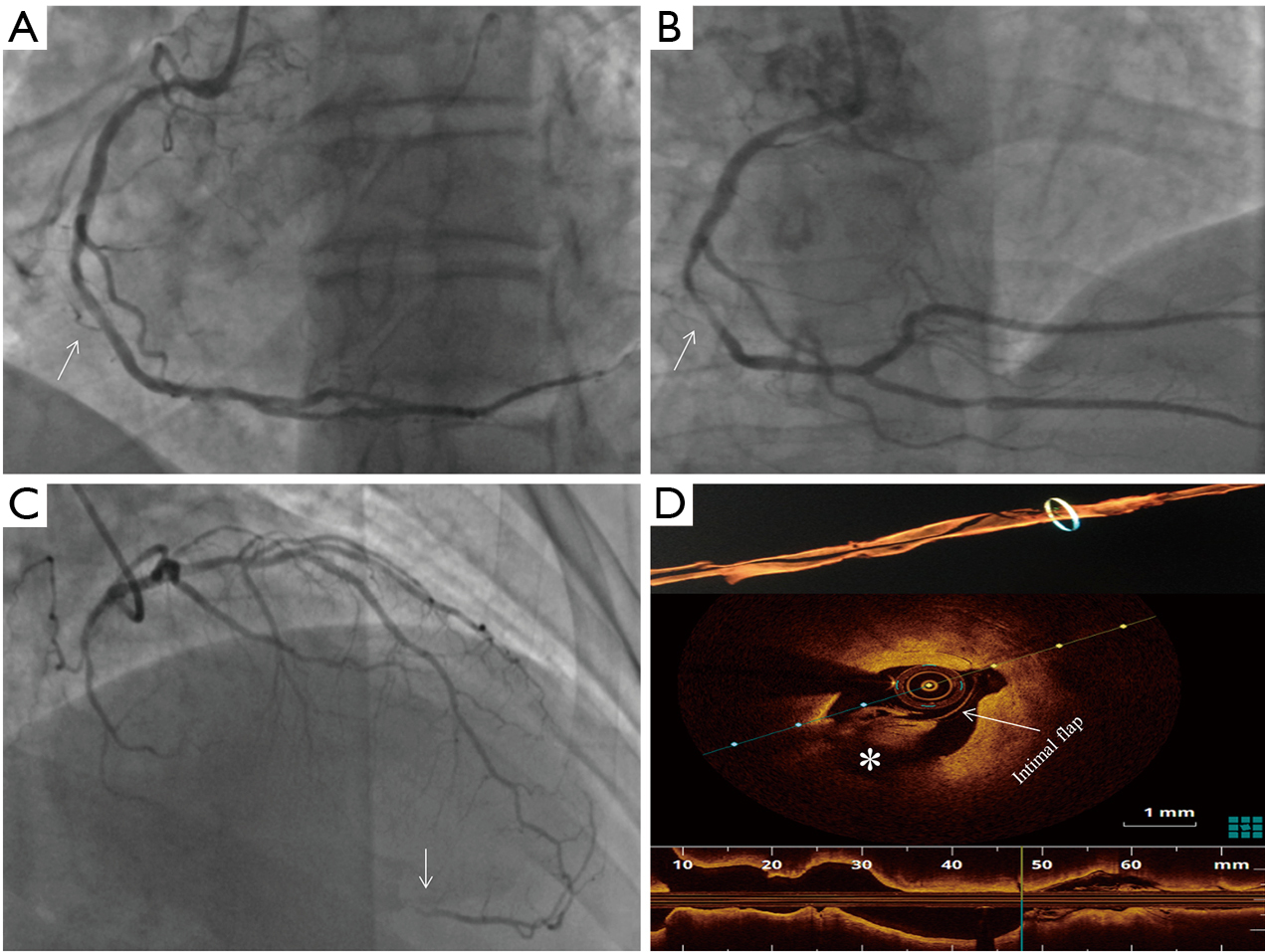 On top of this SCAD diagnosis, we thought to investigate with OCT the angiographic haziness image on ostium of LAD. During guidewire positioning on LAD, the vessel had an abrupt closure starting from the ostium (Figure 3B). Afterward, the OCT and 3D view of the lumen confirmed a SCAD involving the left main coronary artery (LMCA) up to the proximal edge of previous DES (Figure 3C). Accordingly, we implanted 2 DES in overlapping with a good final result (Figure 3D). An OCT of the left circumflex artery (LCX) has shown an image of dissection no flow-limiting that we decided to treat with medical therapy and periodical follow-ups. We have planned periodic clinical follow-ups at 1/3/6/9 months and a yearly angiographic control (Figure 4A,B,C) that showed a good result with well-sealed vessels and no image suggesting further dissection and the patient is still asymptomatic.

Here we would like to do further considerations: (I): SCAD is a misdiagnosed entity because of the difficulty to recognize the pathognomonic multiple radiolucent lumens with contrast wall staining. This typical sign is absent in >70% of SCAD and only intravascular imaging may help to verify arterial wall integrity (2,3); (II) however, IVUS could not clearly show a SCAD, mostly in a suspect case and operators with poor confidence with this technique in this particular setting, due to its spatial resolution (about 1/10 vs. OCT). Two interesting cases in which the two different endovascular imaging approaches were previously reported, thus comparing the differences in spatial resolution (12,13); (III) this is a rare case of multivessel SCAD in which the entire coronary tree is totally involved presenting with an inexplicable collateral circulation between two of three arteries. Although SCAD is usually an acute lesion, in our opinion the presence of collaterals in absence of clear signs of ongoing dissection (intimal flap/false lumen) could represent a previous dissection virtually “cronicized”; (IV) three-dimensional lumen view by OCT is an interesting tool in this setting for study the flap extension and behavior as well as contemporary acquisition of OCT/angiography; (V) probably, a bioresorbable vascular scaffold could be an intriguing solution in this setting with a low atherosclerotic burst (14), anyway, in this case, a DES strategy was preferred because of ongoing symptoms during acute coronary syndrome, the wide-spread extension of the dissection and due to low experience on these “newer” devices in this setting; (VI) in the literature a similar case was described in 2015 showing how intracoronaric did not unrevealed the SCAD presence and only the guide-wire positioning allowed the diagnosis of a wide-spread dissection involving LM, LAD with a large diagonal and intermediate branches (15).

Following our experience, a clinical-angiographic score is a useful tool for faster and appropriate diagnosis mostly performing OCT, in fact, IVUS could not give a unique interpretable image for SCAD as in the case reported. We suggest performing OCT even in angiographic haziness images of non-culprit vessels because a hidden dissection could be recognized.