Here, we describe a patient with myxofibrosarcoma in the right ventricle and pulmonary arteries that initially presented as pulmonary thromboembolism. 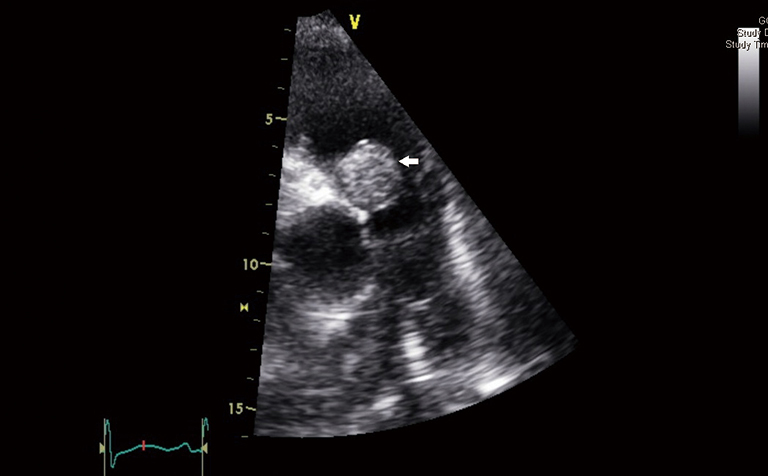 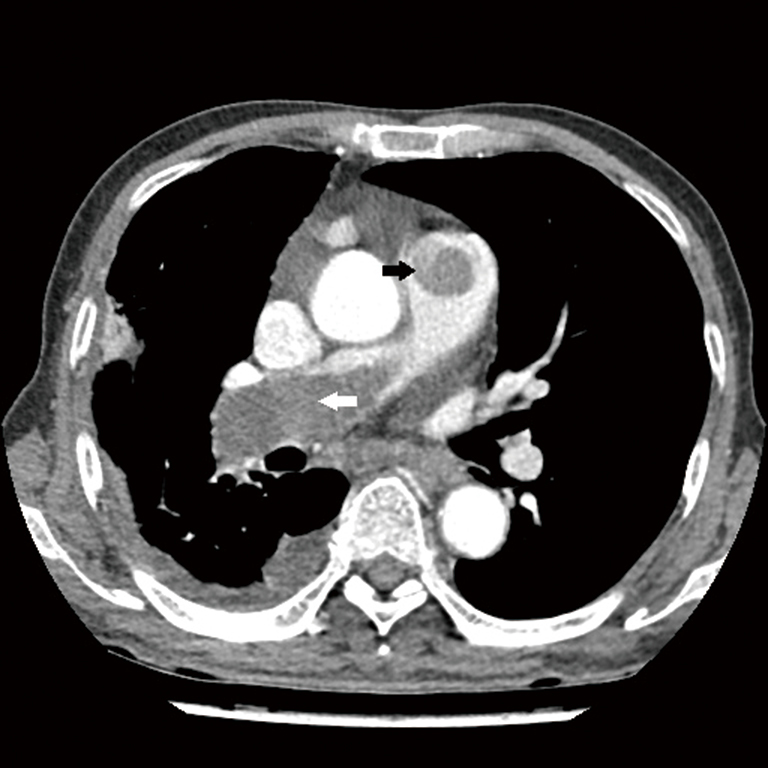 After median sternotomy, ascending aorta and superior vena cava were prepared for cannulations. Previous femoral venous cannula for ECMO was used for inferior vena cava cannulation. The aorta is clamped and cold crystalloid cardioplegia was infused through an aortic root cannula. Main pulmonary artery and both pulmonary arteries were opened in a T shape longitudinally and incision was extended to right ventricular outflow tract. 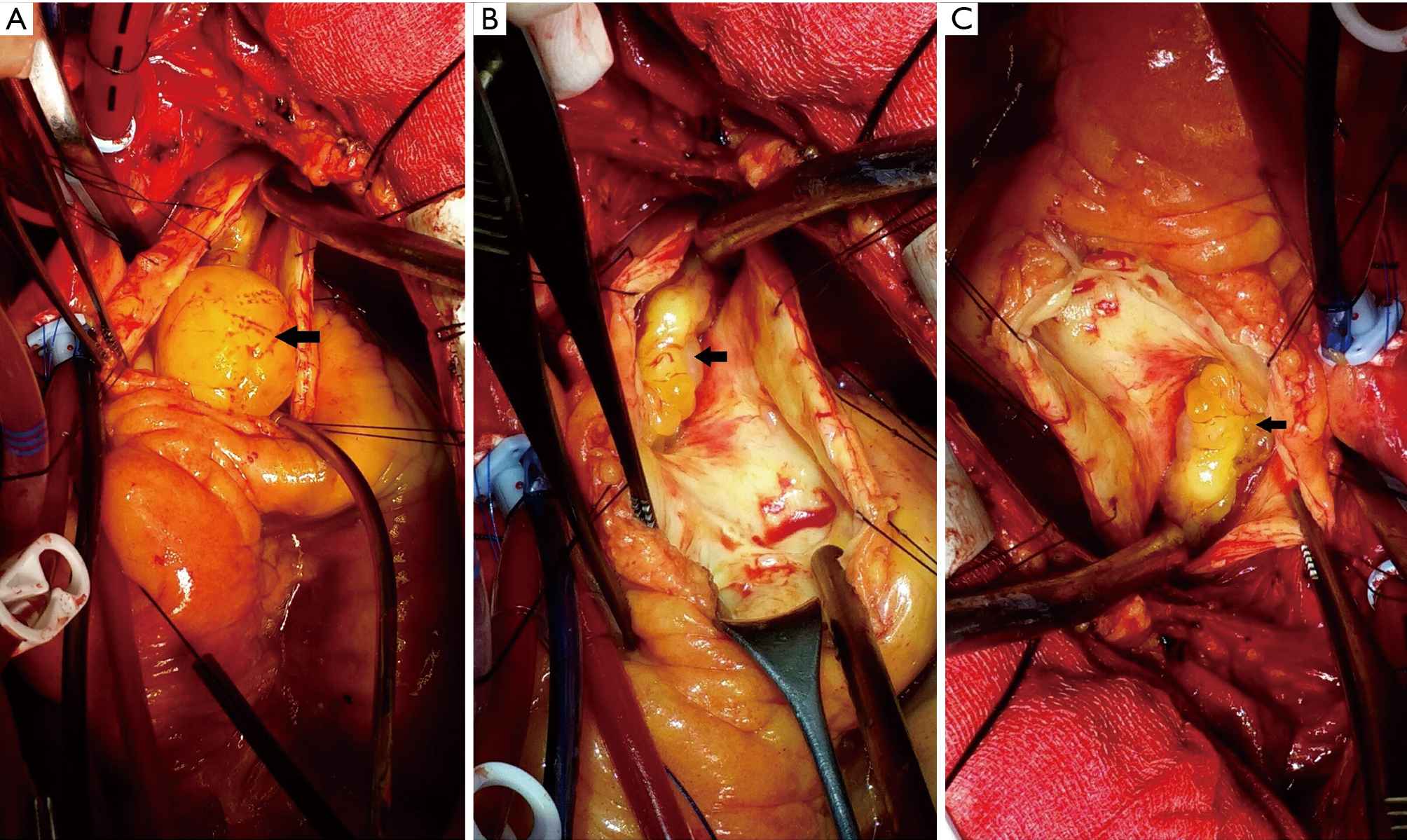 Histologically, the tumor was predominantly myxoid and had elongated, curvilinear capillaries. The nuclei were hyperchromatic and mildly pleomorphic, with only rare mitotic figures (Figure 4). The tumor cells were immunonegative for CD31, S-100, desmin, epithelial membrane antigen, and CD34, and focally positive for actin. The right ventricular mass was demonstrated to be a low-grade myxofibrosarcoma and was consistent with the pulmonary artery masses. 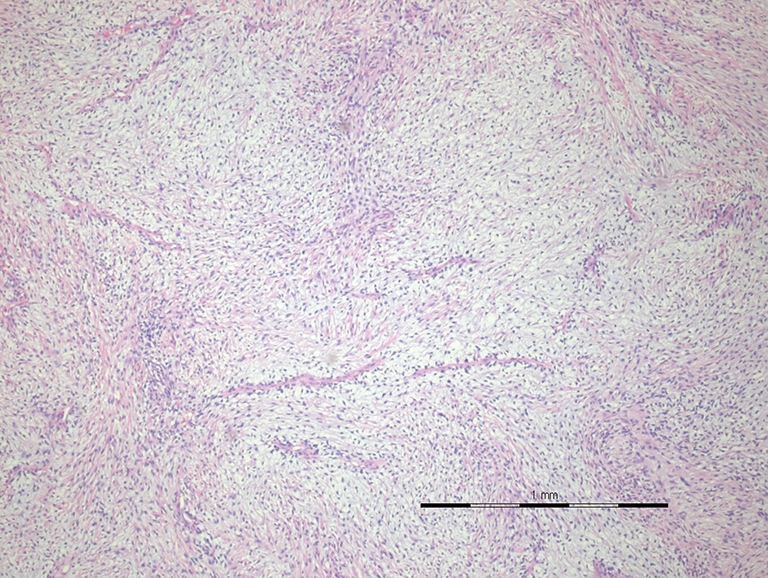 The pulmonary artery pressure decreased immediately after the operation, but the patient died at postoperative day 5 due to progression of the right-side heart failure.

Primary cardiac tumors are uncommon, with 75% being benign and 25% being malignant. Among primary malignant cardiac neoplasms, approximately 75% are sarcomas that present with various clinical manifestations, including obstructing blood flow, embolism, pericardial effusion, arrhythmias, and generation of substances that result in constitutional systemic symptoms (1).

The most common primary malignant cardiac neoplasms are sarcomas with myofibroblastic differentiation, which mostly arise in the left atrium. Angiosarcomas are the most common, followed by rhabdomyosarcomas, malignant mesotheliomas, and fibrosarcomas (2).

Myxofibrosarcomas are tumors of mesenchymal origin that commonly affect the extremities of elderly patients and occur frequently in dermal or subcutaneous tissues (3). They have high rates of local recurrence and distant metastasis. Their histologic features include a nodular growth pattern, a myxoid matrix containing elongated capillaries, fusiform, round, or spindle cells with indistinct cell margins, a slightly eosinophilic cytoplasm, and a hyperchromatic atypical nuclei. These lesions are categorized from low-grade neoplasms with a hypocellular, mainly myxoid, and spindle-cell appearance, to high-grade neoplasms with pleomorphic lesions with multinucleated giant cells, high mitotic activity, and areas of necrosis. A low-grade myxofibrosarcoma tends to metastasize locally, requiring wide surgical resection, while high-grade myxofibrosarcomas invade local and adjacent tissues and are associated with distant metastasis to the lung, bone, brain, and lymph nodes.

A cardiac myxofibrosarcoma occurs in the endocardium and can arise in any one of the four chambers of the heart and also occur in valvular and vascular structures. The left atrium is the most common location (4), followed by the right atrium, right ventricle, and ventricular septum. A rare case of primary myxofibrosarcoma in the aorta has also been reported (5). Myxofibrosarcomas are considered to originate from myofibroblasts. Microscopically, the tumor cells represent fibroblastic differentiation with secretory activity within a myxoid matrix, and they are composed of spindle or rounded cells within a myxoid matrix, without significant pleomorphism.

In our patient, the right ventricular mass was confined to the endocardial surface of the right ventricular outflow tract and it was clearly separated with the masses of pulmonary arteries. The initial clinical presentation as pulmonary thromboembolism rather than the mass effect in the right ventricle reflects the distinct features of early local metastasis of low-grade myxofibrosarcoma. Pulmonary artery sarcomas often present with pulmonary artery obstruction and can be mistaken for chronic pulmonary embolism, as in our case for both the clinically and imaging findings. Dang et al. (5) reported the aortic myxofibrosarcoma that mimicked a thrombus. A myxofibrosarcoma is a hypovascular neoplasm that does not exhibit contrast enhancement, and it could be confused with a thrombus.

Initially the patient was treated with anticoagulation under diagnosis of pulmonary thromboembolism. Despite anticoagulation, pulmonary lesions were progressed. Surgical treatment was recommended for the differentiation of pulmonary artery sarcoma and pulmonary embolism, but patient refused.

Complete surgical resection is important for prolongation of survival. But, complete resection is very difficult and it occurs in only about one third of cases. Shiga et al. (6) reported a large myxofibrosarcoma of the right ventricle in a 56-year-old male which obstructed the right ventricular outflow tract. Though the mass was extended into right pulmonary artery, they did not show the local or distant metastasis and the mass was resected successfully. However, the local metastasis and diffuse infiltration into endocardial surface and both pulmonary arteries in our case made complete resection impossible. Radiotherapy and chemotherapy can be considered in case of residual lesions or high-grade tumors, but, the role of radiotherapy and chemotherapy is uncertain. The exact prognosis of cardiac myxofibrosarcoma has not been elucidated; the outcomes of cardiac myxofibrosarcomas are usually disappointing.

Our patient had a rare case of cardiac myxofibrosarcoma which arising from the endocardial surface of right ventricle and it initially presented with pulmonary thromboembolism. Myxofibrosarcoma of the heart is very uncommon and has regional and distant metastatic potential. Therefore, it should be considered in the differential diagnosis of pulmonary thromboembolism.