Primary malignant chest wall tumors are a heterogeneous group of tumors that originate from thoracic soft tissue and skeletal structures (1,2).

They may be asymptomatic and slowly growing with pain development during their extension (3). They need broad tumor-free margins that often lead to complex chest wall resection and reconstruction techniques, especially when the tumor is large in diameter or located posteriorly adjacent to the vertebrae or involves the sternum. Consequently, an early diagnosis of a small tumor increases the possibility of a curative therapy and decreasing the need for extended resections (4).

Extensive chest wall defects that involve soft and skeletal tissues may be the end result of chest wall resection of those tumors with 2 available method for reconstruction of such defects; prosthetic or biologic mesh and/or flaps with their blood supply (3,5-7). Recent advances in the techniques of skeletal and musculocutaneous reconstructions have facilitated the treatment of these tumors so that tumor size is not a contraindication to radical excision (8).

They require special experience in designing resection and reconstruction. This study aimed to clarify different factors contributing to the outcome of patients with PMCWTs in our institution.

This study was approved by institutional ethics committee/ethics board of National Cancer Institute (NCI)/Cairo University (No. IRB00004025). We retrospectively reviewed pathologically proven PMCWTs that were treated surgically at the NCI, Cairo University, Egypt, during the past 10 years.

Computed tomography (CT) of the chest and upper abdomen was the initial staging tool for all patients with magnetic resonance imaging requested only if indicated. In our institute, the commonest used biopsy methods were core needle biopsy with or without CT guidance. We reserve fine needle aspiration cytology (FNAC) for suspected recurrence. Surgical resection and reconstruction was designed according to the site and extent of the lesion resected. Adjuvant and neo-adjuvant therapy was given according to multi-disciplinary thoracic oncology team (MDT) decision.

Our institutional treatment policy for PMCWT is based on MDT decision. Regarding neoadjuvant/adjuvant treatment: (I) for PNET; the primary treatment is multi-agent chemotherapy: VAC/IE (Vincristine, Doxorubicin and Cyclophosphamide alternating with Ifosfamide and Etoposide) followed by local control therapy (either surgery or radiotherapy) followed by adjuvant chemotherapy to complete 54 weeks from the beginning of treatment (13,14); (II) for other chemo- and radio-resistant tumors as chondrosarcoma and fibrosarcoma the final decision will be based on MDT meeting opinion, however; we usually give postoperative radiotherapy in case of +ve surgical margin and high grade tumors that represent a poor prognostic criteria.

Defects less than 5 cm in diameter anywhere in the chest wall did not require skeletal reconstruction and could be closed with soft tissue only. Posterior superior defects less than 10 cm in diameter did not have to be reconstructed as they are covered with shoulder blades and large back muscles that provided adequate firmness and stability and did not disturb breathing mechanics.

Mesh with rigid reconstruction was adopted in sternal or ≥3 anterior, lateral or posterior ribs resection. Muscle reconstruction was adopted in <2 anterior ribs resection, while mesh reconstruction was done in <2 ribs resection located laterally or posteriorly similar to prior series (8). Sandwiched bone cement i.e., methyl methacrylate enclosed with Prolene mesh (MMM) was the most common method of rigid reconstruction in our institute (Figure 1) . We usually fix the MMM with sutures placed either through drill holes in adjacent ribs or through peri-costal soft tissues and fix it to the surroundings using either PDS 0 or Prolene 1 sutures with a 2–3 cm overlapping margin between the mesh and chest wall to avoid pushing the mesh inside the defect with breathing 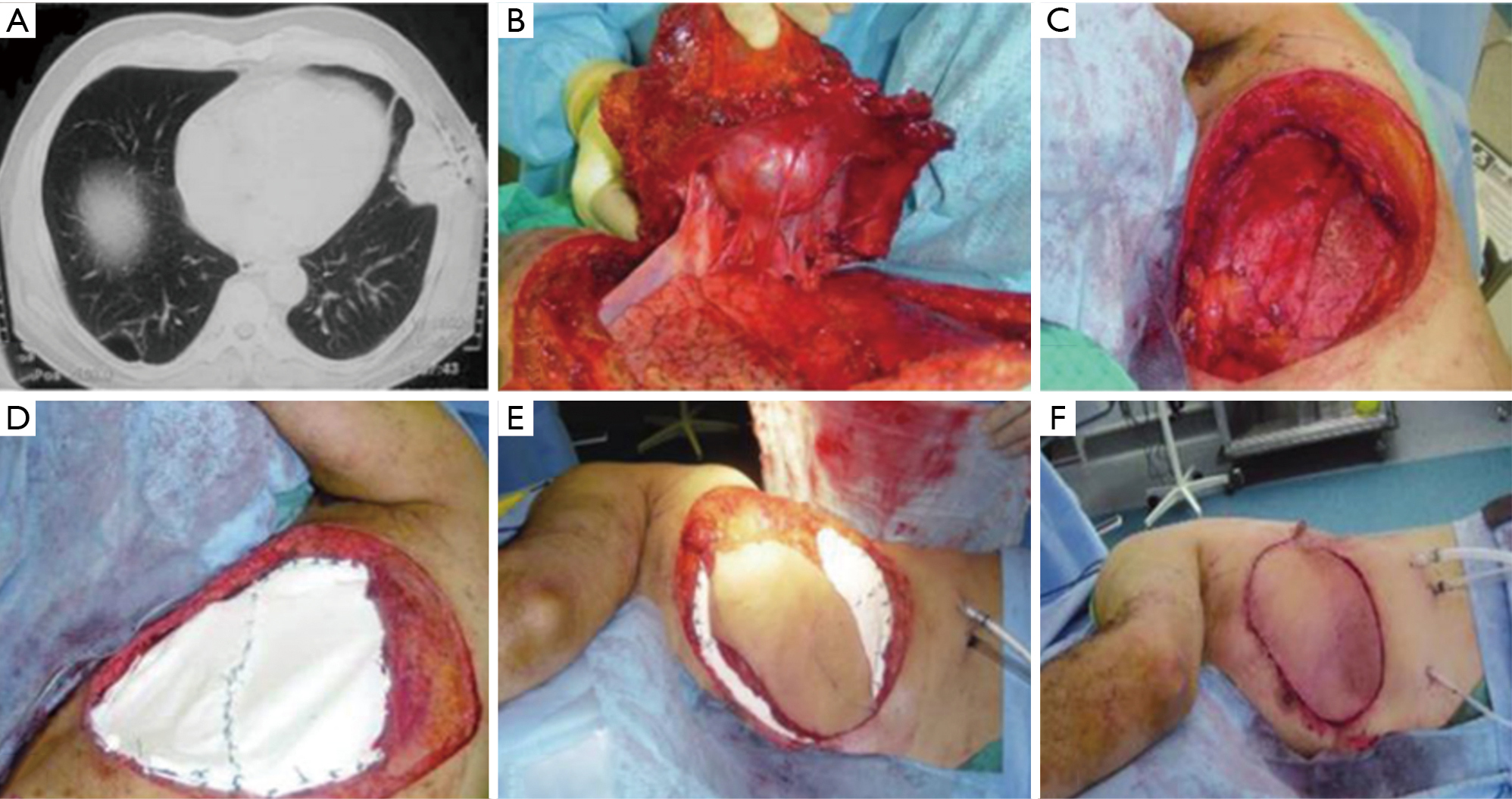 The primary outcomes were to identify OS and DFS, that were analyzed using the Kaplan-Meier survival curves. Survival curves for significant variables in the multivariate analysis were compared using Log-rank test.

The secondary outcomes were to compare the clinico-pathological and survival data between the commonest 3 pathological subtypes among our cohort (chondrosarcoma, fibromatosis/fibrosarcoma and PNET/Ewing sarcoma.

Chondrosarcoma was the commonest tumor histology (20.4%) followed by fibromatosis/fibrosarcoma (19.4%) and PNET/Ewing sarcoma (16.3%) (Table 2). Other histopathological types were osteosarcoma in 9 (9.2%), pleomorphic undifferentiated sarcoma in 8 (8.2%), synovial sarcoma in 5 (5.1%), dermatofibrosarcoma in 3 (3.1%), 2 (2%) for each of angiosarcoma, alveolar soft part sarcoma, myxofibrosarcoma, rhabdomyosarcoma, plasma cell myeloma, lymphoma, adenocarcinoma and 1 (1%) for each of myxoliposarcoma, metaplastic carcinoma, squamous cell carcinoma and undifferentiated carcinoma. 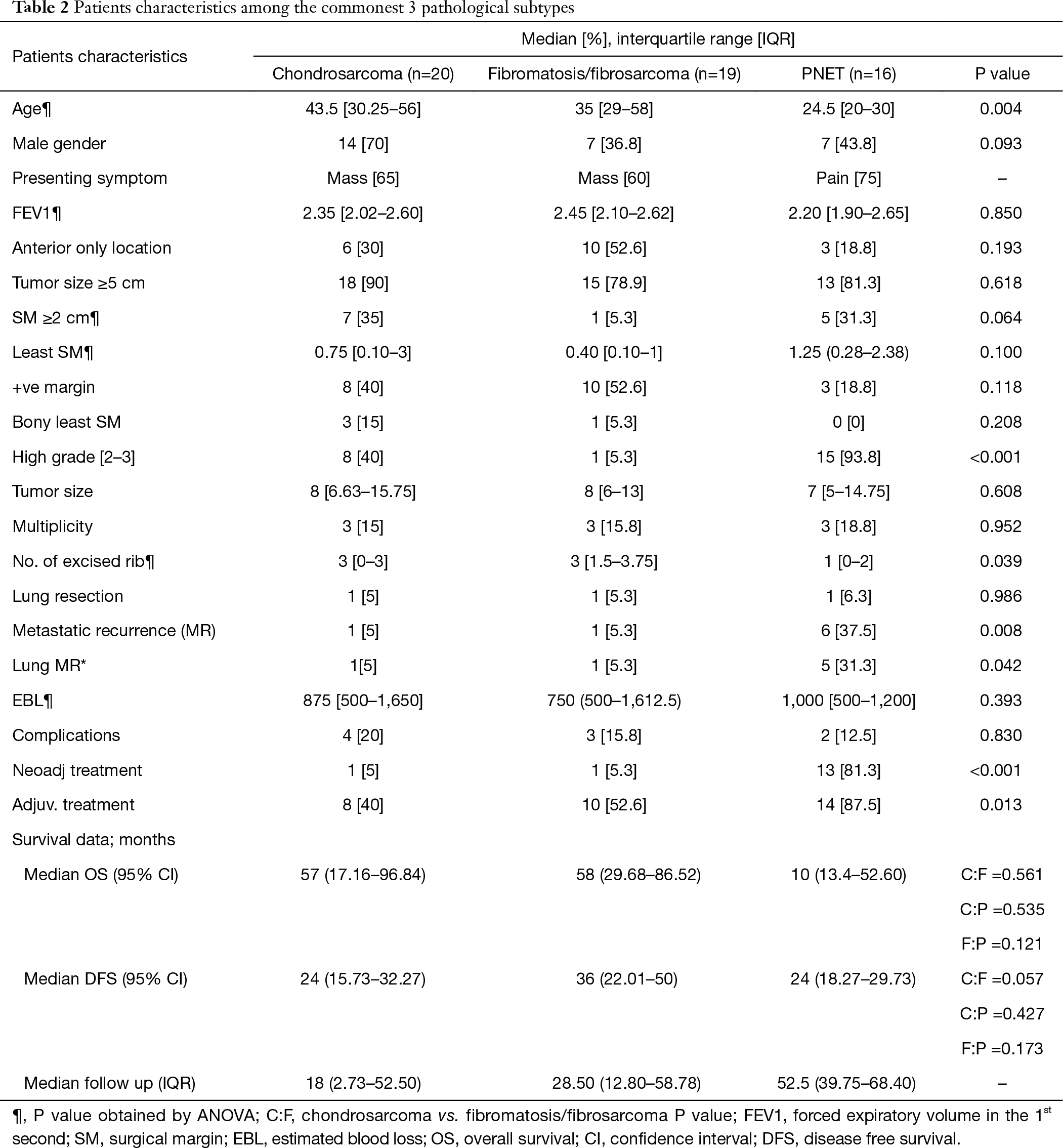 Sternal resection was done in 7 (7.1%) cases and their pathological diagnoses were 2 cases of chondrosarcoma, 2 rhabdomyosarcomata, 1 adenocarcinoma, 1 metaplastic carcinoma and 1 solitary plasma cell myeloma.

Thirty-one (31.6%) patients had no adjuvant therapy. Adjuvant radiotherapy was given in 20 (20.4%) patients; 8 (40%) were fibromatosis/fibrosarcoma, 5 (25%) were chondrosarcoma, 3 (15%) were synovial sarcoma and 3 (15%) were dermatofibrosarcoma and 1 (1%) was osteosarcoma. Adjuvant chemotherapy was given in 26 (26.5%) patients; 10 (38.5%) were PNET, 6 (23.1%) were osteosarcoma, 2 (7.7%) were synovial sarcoma and 1 (3.8%) of each of the followings: rhabdomyosarcoma, pleomorphic undifferentiated sarcoma, chondrosarcoma, fibrosarcoma, alveolar soft part sarcoma, metaplastic carcinoma, adenocarcinoma and squamous cell carcinoma. Adjuvant chemoradiotherapy was given in 21 (21.4%) patients; 7 (33.3%) were pleomorphic undifferentiated sarcoma, 4 (19%) were PNET, 2 (9.5%) of each of the followings: chondrosarcoma, lymphoma and plasma cell myeloma and 1 (4.8%) of each of the followings fibromatosis, osteosarcoma, rhabdomyosarcoma and undifferentiated carcinoma. 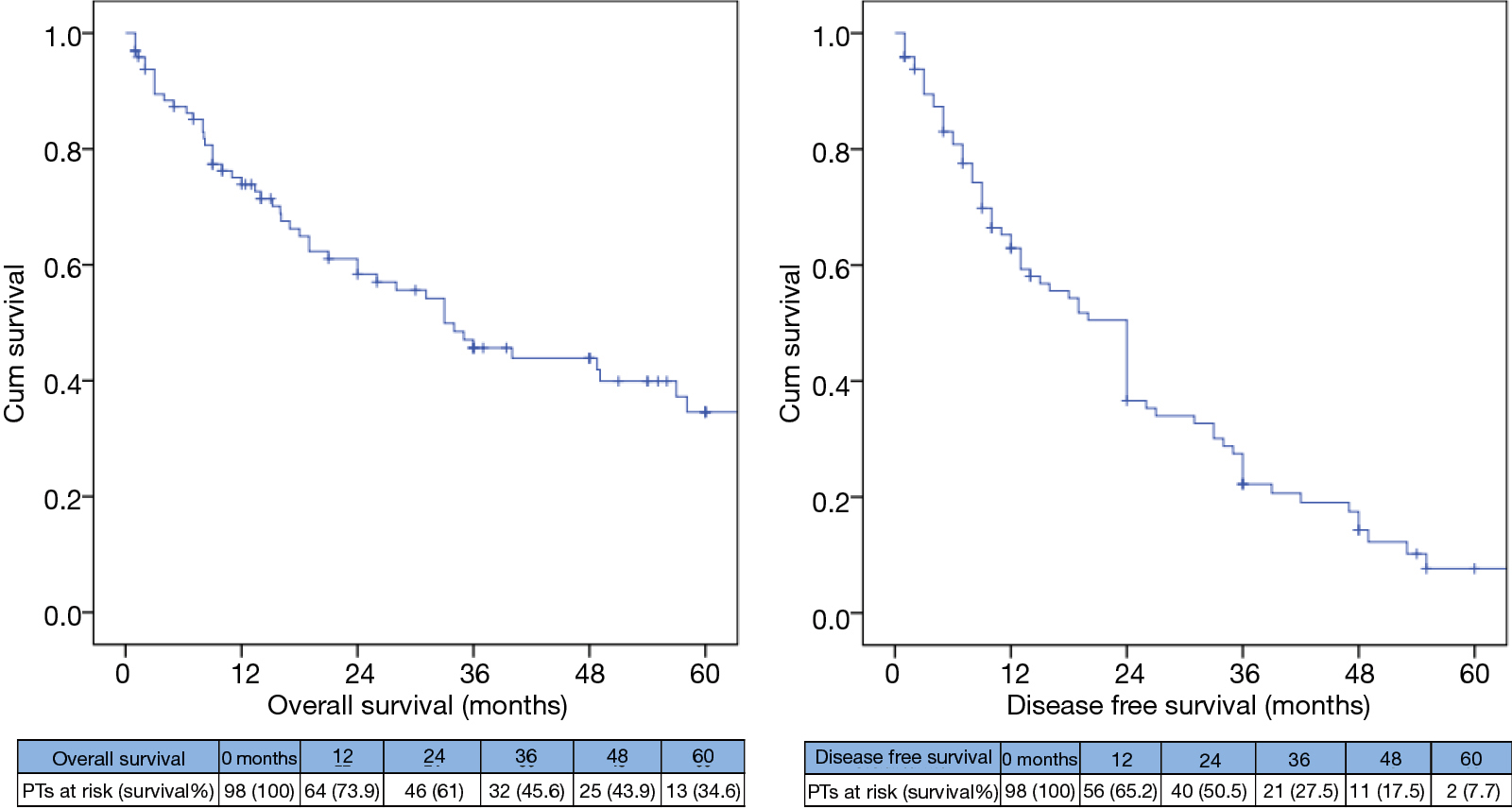 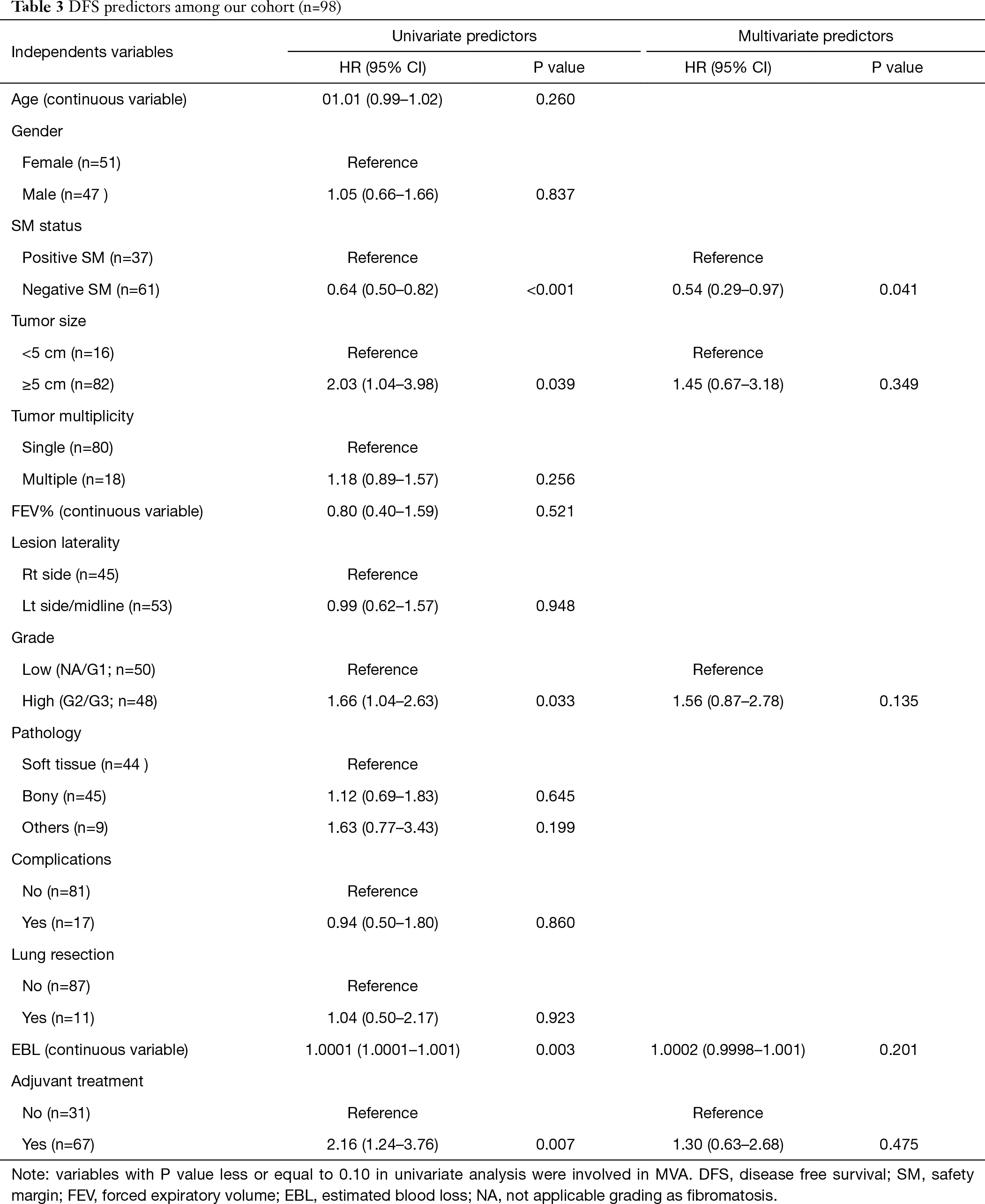 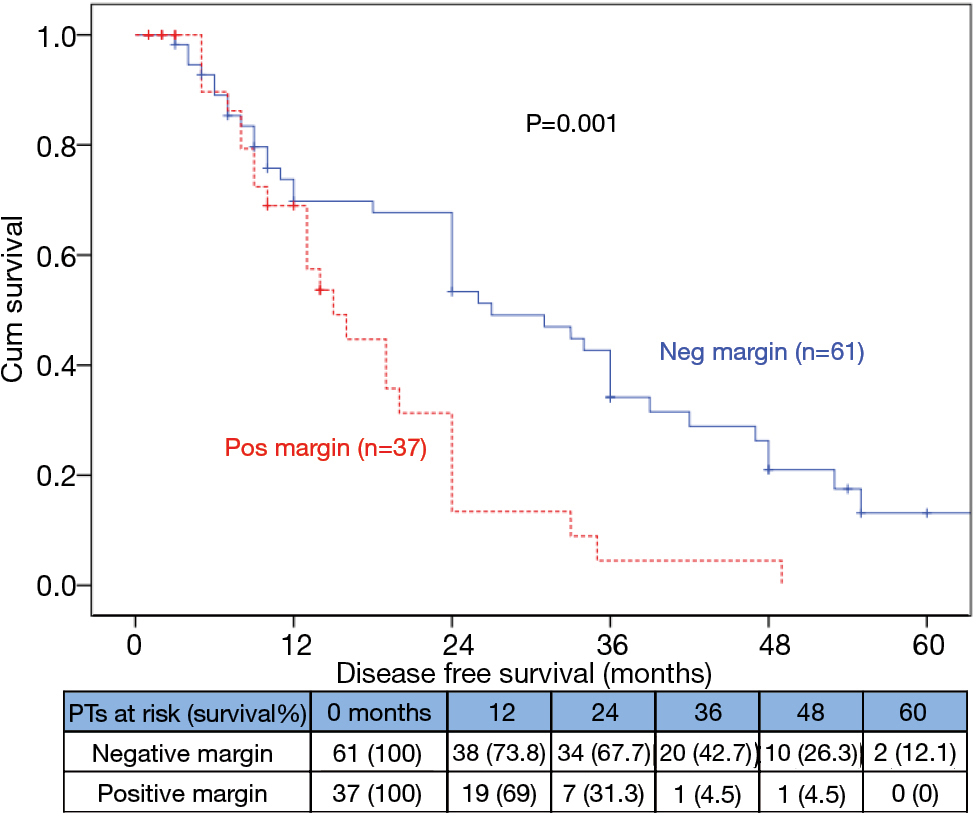 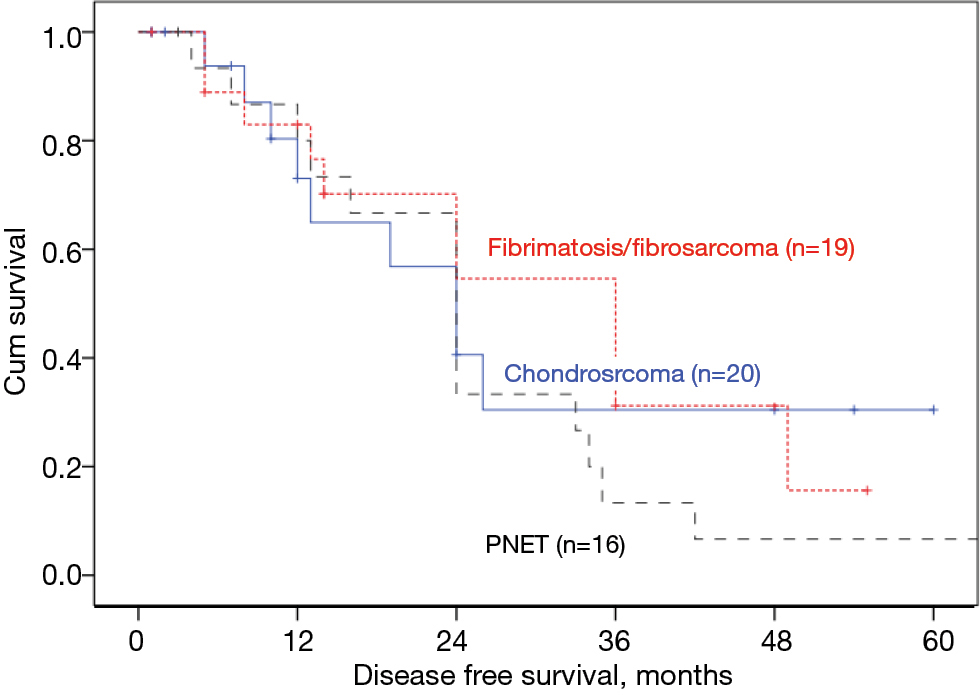 Chest wall tumors represent 5–20% of all thoracic malignancies in adult and children respectively. In children, Ewing’s sarcoma is the most common chest wall tumor; while in adults chondrosarcoma predominates (2,15,16).In our study the figure for adult was confirmed and chondrosarcoma was found to be the most predominant pathological subtype.

There were 51 (52%) females among our series that is similar to that reported by Maeda et al. (17), but are slightly different than those reported by Hemmati et al. (18) who reported 41.77% were females, however his series main point was on resection of the chest wall metastasis.

It is widely accepted that all tumors of the sternum should be considered as malignant until proved otherwise (25,26). In our series, seven cases underwent sternal resection; 2 were chondrosarcoma, 2 rhabdomyosarcomata, 1 adenocarcinoma, 1 metaplastic carcinoma and 1 solitary plasma cell myeloma.

Chest wall reconstruction is essential if there is resection of three ribs or more aiming for adequate stability and water and airtight closure of the chest cavity with acceptable cosmetic appearance. Bony reconstruction should be tailored to the extent of resection. Stabilization of the chest wall obviates the need for prolonged ventilation as patients are able to maintain their pulmonary function postoperatively (6,27). Muscle and musculocutaneous flaps are the tissues of choice to cover the wound, avoid or decrease the risk of infection, obliterate spaces and cover the synthetic mesh (28). In our study, chest wall reconstruction was done by the use of double layer Prolene mesh with or without bone cement that is covered either by rotational pedicle muscle flap (LD or serratus anterior), that were chosen by proximity, knowing the arc of rotation and calculating the area of possible coverage, or covered by the local muscle flap (pectoralis major). In most cases, only a single muscle was transferred (27,29).

CWT resection is associated with a low major morbidity as long as reconstruction was done when indicated (1,8). Among our series, complication rate was 17.3% compared to 11–27% in the previous studies (1,30).

Prior reported series and meta-analysis in different cardiothoracic operations reported adverse survival with higher blood loss and intra-operative blood transfusion. In our series higher intra-operative EBL was associated with adverse DFS in univariate analysis but this was not sustained in the multivariate model (35-37).

Margin positivity (R1) was the most trivial and independent factor impacting survival in multivariate analysis. This runs in parallel to prior reported series in CWTs or other thoracic malignancies (30,38).

In primary malignant CWTs achievement of wide resection margins is of great importance to minimize the local tumor recurrence that will have an adverse impact on long-term survival.

Authors would like to thank Eng. Mostafa Rahouma for technical support in finalizing this work.

Ethical Statement: This study was approved by institutional ethics committee/ethics board of National Cancer Institute (NCI)/Cairo University (No. IRB00004025). Written informed consent was obtained from the patient for publication of this manuscript and any accompanying images.