Ciliated muconodular papillary tumor (CMPT) is a recently defined lung tumor that shows a papillary or glandular proliferation of ciliated columnar cells, mucous cells, and basal cells surrounded by intra-alveolar mucin pools in the peripheral lung (1-6). This type of tumor has bland cytologic features and all cases reported to date have consistently shown an indolent clinical course. Recently, CMPTs have been encountered more frequently as the use of the low-dose computed tomography (CT) for screening of lung cancer has increased. Because CMPT is usually seen in the subpleural lung parenchyma as a solitary pulmonary nodule, it might be misdiagnosed as lung cancer clinically and radiologically (2).

Although the organized growth pattern with various cellular components including ciliated cells and basal cells, ill-defined nodular lesion, and common occurrence in the peribronchiolar area favor a metaplastic nature, solitary presentation, characteristic histological features and adenomatous proliferation of mucous cells suggest that this tumor is a neoplasm. Recently, the presence of driver mutations in BRAF, EGFR or KRAS in a subset of CMPT was reported (3-5) and this finding strongly suggests that CMPT is a neoplasm rather than a metaplastic process. However, the role of oncogenic mutations in the pathogenic mechanism of CMPT has not been evaluated yet.

Here, we report a case of CMPT harboring BRAF V600E mutation as well as p16INK4a overexpression and no proliferative activity and propose that oncogene-induced senescence (OIS) might be the pathogenic mechanism of CMPT.

A 72-year-old man visited our hospital due to an incidentally identified lung mass. The patient is a former smoker with a 30-pack-year smoking history, but had quit 4 years ago. He does not have any medical problems such as diabetes mellitus, hypertension or pulmonary tuberculosis. Low-dose chest CT was performed for routine health examination and a pleural based, 9-mm ground glass nodule was detected in the posterior basal segment of the left lower lobe (Figure 1). On follow-up CT performed after 6 months, the size of the nodule had not increased. However, it showed mildly increased 18F-fluorodeoxyglucose (FDG) activity on positron emission tomography (PET)-CT. Clinically lung cancer was suspected and video-assisted thoracoscopic wedge resection was performed for pathological diagnosis. 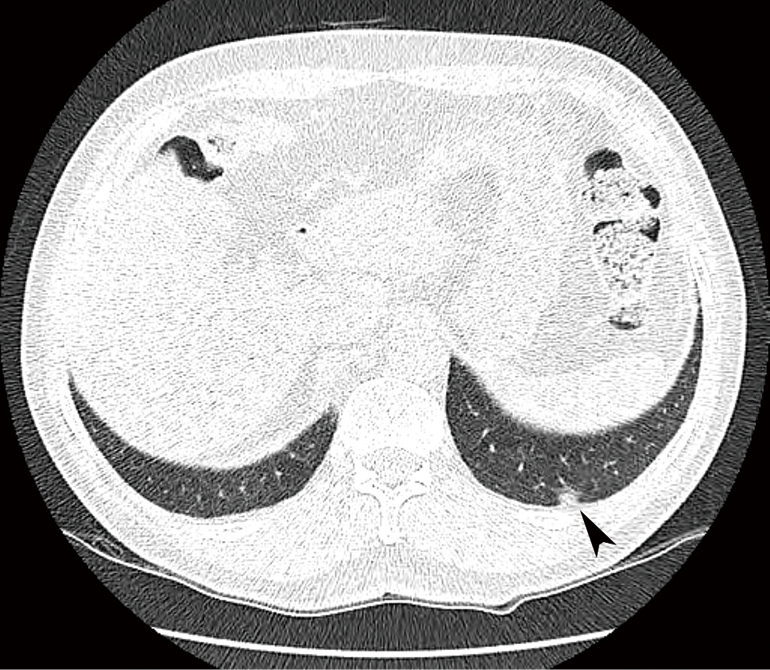 Grossly, an ill-defined small mucoid nodule was seen in the subpleural area without pleural retraction. On low-power examination, the tumor was composed of nodular mucous cell proliferation surrounded by an intra-alveolar mucin pool, mimicking mucinous adenocarcinoma (Figure 2A). The tumor showed adenomatous proliferation and focal broad papillary fronds of bland-looking epithelial cells (Figure 2B). Mucous cell was the predominant cell type in adenomatous proliferation. The luminal surface of papillary fronds and some glands were composed of organized growth of three cellular components including mucous cells, ciliated columnar cells and underlying basal cells (Figure 2C). Ciliated cells between mucous cells were pseudostratified and protruding into the space. The epithelial cells did not show any nuclear atypia, mitotic figure, or necrosis. Immunohistochemically, all types of epithelial cells were positive for cytokeratin 7. P63 immunostaining highlighted continuous lining of basal cells beneath the columnar cells. A subset of ciliated columnar cells and basal cells was positive for TTF-1. Ki-67-positive epithelial cells were not seen, suggesting no proliferative activity of the tumor. The tumor cells were strongly positive for p16INK4a (Figure 2D), whereas few of them showed weak positivity for p53 immunostaining. Targeted deep sequencing with the Ion AmpliseqTM Comprehensive Cancer Panel (Life Technologies, Carlsbad, CA, USA) demonstrated BRAF V600E point mutation (mutant allele frequency: 13.0%) (Figure 3), which was confirmed with a PNAClampTM BRAF mutation kit (Panagene, Daejeon, South Korea). High risk-human papillomavirus (HPV) was not detected by real time PCR assay (HPV PANA RealTyperTM, Panagene). Post-surgical complication was not reported, and the patient has been doing well for 36 months of follow-up. 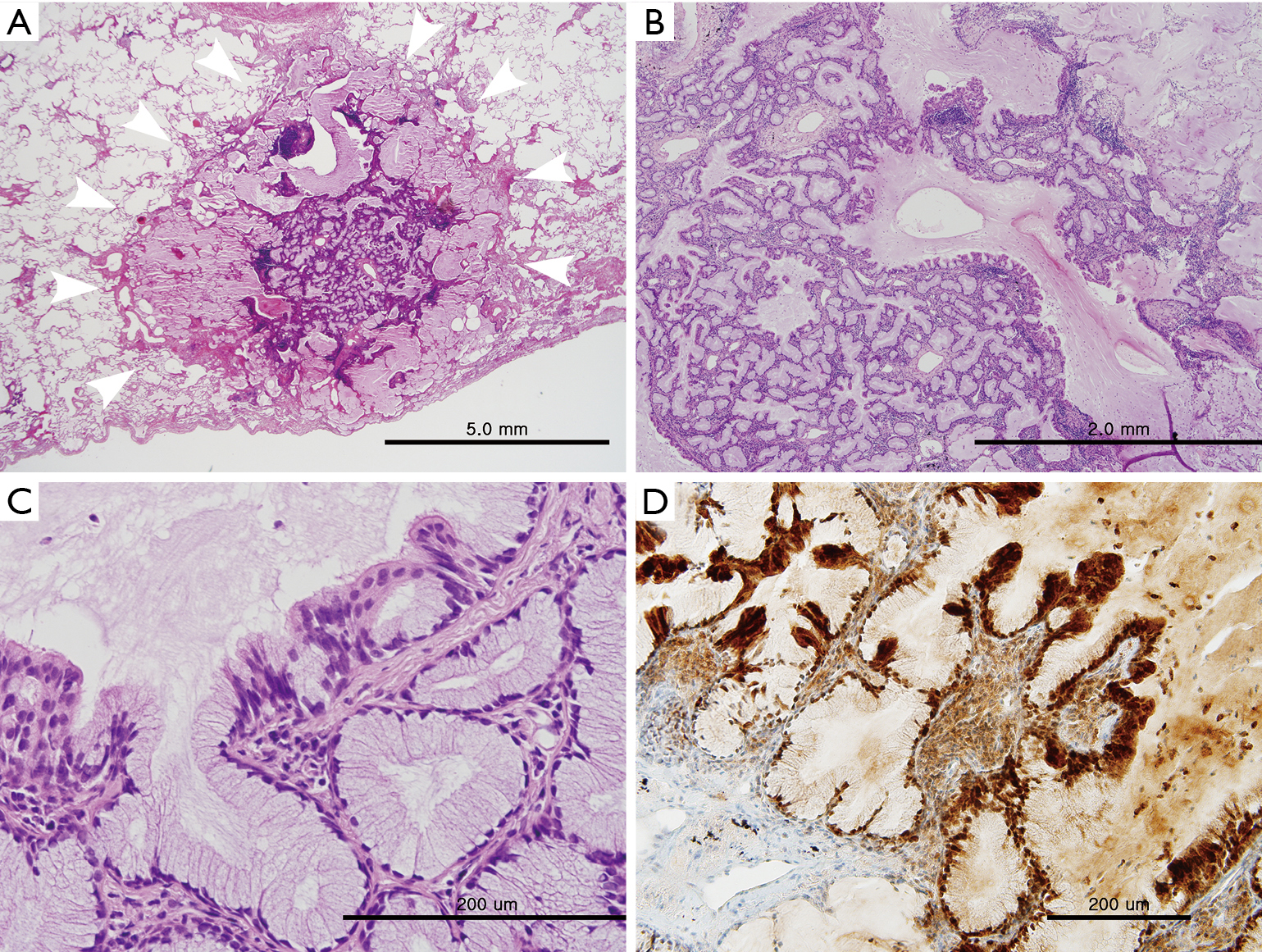 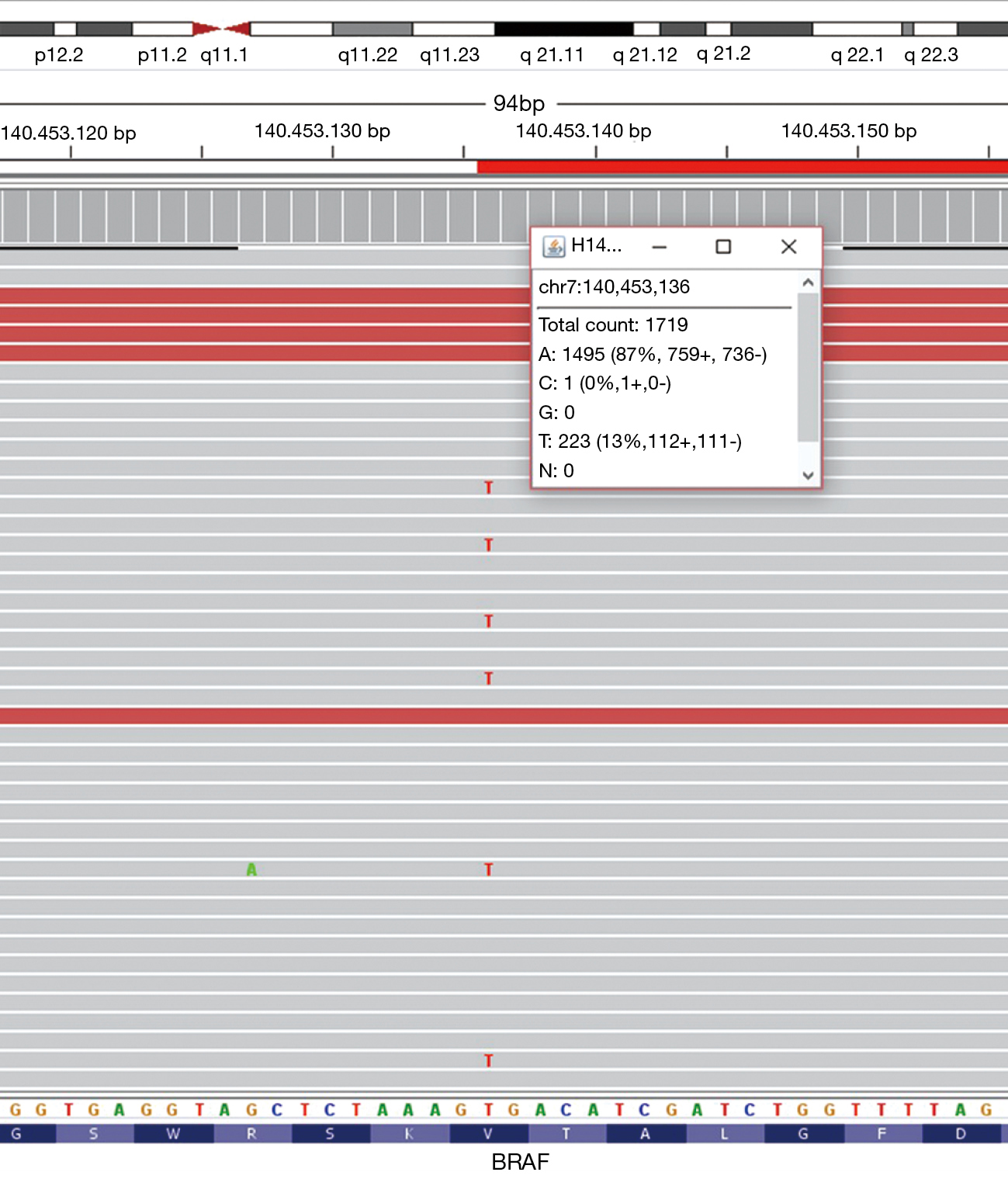 In 2002, Ishikawa first proposed the new entity of CMPT in the peripheral lung showing a papillary proliferation of ciliated columnar cells, mucous cells and basal cells surrounded by a mucin pool filling the adjacent alveoli (1). A recent collective review by Kamata et al. encompassing ten cases of CMPT delineated this tumor as a distinct entity with specific clinicopathologic features and following an indolent clinical course (6). Recently, researchers demonstrated the oncogenic driver mutations in a considerable proportion of CMPT, suggesting the neoplastic nature of this entity (3-5). Kamata et al. reported five cases of CMPT with BRAF mutations; V600E in four and G606R in one (3). Liu et al. and Udo et al. also demonstrated BRAF V600E (4,5). Other mutations, such as EGFR (delE746_T751/S752V), KRAS (G12D), PTPN11 (P491L), CTNNB1 (D32N), IDH1 (G123R), AKT1 (E17K), and TP53 (L289F) have also been detected (3-5). However, the role of oncogenic driver mutations on the pathogenesis of CMPT has not been discussed yet. Here we report a case of CMPT showing characteristic histological findings and harboring distinct molecular features with BRAF V600E mutation, p16INK4a overexpression, and no proliferative activity.

OIS is a robust and sustained cell cycle arrest induced by oncogenic mutation. The driver oncogenes which are commonly associated with OIS are BRAF, HRAS and KRAS (7). The p16INK4a is a tumor suppressor inducing cell cycle arrest, and has protective role against BRAF V600E-driven proliferation. It is upregulated in senescent cells (7) and one of the markers of OIS (8), although factors other than p16INK4a also contribute to the senescence caused by BRAF V600E (7).

BRAF is a well-known driver oncogene that is mutated in many types of malignant tumors such as malignant melanoma, thyroid papillary carcinoma and colonic adenocarcinoma, and V600E point mutation is the most common type. Interestingly, BRAF V600E mutation is frequently found in various types of benign tumors. For example, most acquired melanocytic nevi and a subset of colonic serrated polyps/adenomas have this mutation (9,10). Oncogenic BRAF mutation induces proliferation of melanocytes and crypt epithelial cells and leads to formation of tumorous masses. However, most of them do not show continued proliferation or progress to malignant tumors. Nevi and hyperplastic crypts remain dormant for a long time with very low proliferative activity, elevated expression of p16INK4a and induction of senescence-associated acidic-β-galactosidase activity, representing OIS (8,11). In the genetically engineered mouse model, BRAF V600E mutation induces development of multiple lung adenomas. With continuous expression of BRAF V600E, the adenomas display initial high proliferative activity followed by growth arrest because of BRAF-induced senescence (12). Based on these data, we suggest that BRAF V600E is a driver mutation leading to tumorigenesis of CMPT and inducing OIS.

Rare cases of CMPT harboring a component of well differentiated adenocarcinoma has been reported (14). BRAF-induced senescence is associated with the pathogenesis of some pilocytic astrocytoma and Langerhans cell histiocytosis and patients with tumors negative for p16INK4a show significantly shorter survival or aggressive behavior (15,16). Rare cases of acquired melanocytic nevi progress to malignant melanoma when they acquire additional mutations (8). It is assumed that, in cases of CMPT harboring BRAF mutations, failure to induce OIS or accumulation of additional mutations might be associated with malignant progression of this tumor.

Udo et al. reported a case of CMPT harboring KRAS mutation, an oncogenic driver inducing OIS (5). However, the pathogenesis and clinical behavior might be different from our case because KRAS-induced OIS can be bypassed by abrogation of p16INK4a-RB pathway (7). However, this is just an assumption based on the result of one case. The pathogenesis of CMPTs harboring other mutations or no mutation have not been elucidated yet. More cases with comprehensive molecular analysis need to be accumulated for supporting this hypothesis and establishing other pathogenetic mechanisms of CMPTs which have other driver mutations or no mutation.

According to the World Health Organization classification (17), pulmonary glandular papilloma is a benign endobronchial papillary tumor consisting of ciliated and nonciliated columnar cells and varying numbers of mucous cells. Most of these arise in the central lobar or segmental bronchi, while peripherally located pulmonary papillary tumors are very rare. Although their clinicopathologic features are not well characterized, pulmonary glandular papillomas and CMPTs have considerably overlapping histologic features, and the main differential may be endobronchial or non-endobronchial growth. It has not been determined whether they are different entities or representatives of a spectrum of the same disease. Recently, a case of mixed squamous cell and glandular papilloma showing overexpression of p16INK4a without evidence of HPV infection was reported (18). If driver oncogenes such as BRAF mutation are identified or p16INK4a overexpression is confirmed in pulmonary glandular papillomas, the hypothesis that two entities might form a spectrum of the same process with both ends of endobronchial and non-endobronchial tumors can be supportive.

In conclusion, we report a case of CMPT harboring BRAF V600E mutation, no proliferative activity and p16INK4a overexpression. CMPT is unique pulmonary neoplasm with characteristic pathological and molecular features. BRAF V600E mutation might be the driver oncogene inducing initiation of CMPT and leading to OIS, which represents indolent clinical behavior. Further comprehensive reviews with molecular studies are needed to define the nosological relationship of CMPT with pulmonary glandular papilloma.

Funding: This work was supported by Inha University Research Grant (No. 50469-01).

Conflict of Interest: There authors have no conflicts of interest to declare.

Ethical Statement: This study was approved by the Institutional Review Board of Inha University Hospital (IRB number: INHAUH 2016-08-015) and written informed consent was obtained from the patient for use of patient’s tissue for molecular analysis and publication of this manuscript.