The burden of heart failure in the general population: a clearer and more concerning picture

The syndrome of heart failure constitutes a major global health problem. Patients with heart failure exhibit substantial morbidity and poor survival which at best, is similar to cancer (1,2). In addition, heart failure causes enormous healthcare expenditure. A number of recent reports suggest that the overall number of people living with heart failure is increasing due to sizable increases in predisposing diseases or comorbidities (such as diabetes, obesity and hypertension) and due to an aging population in general (3,4). Precise knowledge on the epidemiology of heart failure is required to inform policymakers on how most wisely utilize available resources.

In a recent paper, Conrad et al. provide contemporary insight into the magnitude of heart failure (HF) burden in a representative sample of the general population of the UK (5). Using electronic health records on over 4 million individuals between 2002 and 2014 which were standardized to the 2013 European Standard population they showed that incidence (standardized by age and gender) decreased by 7%, from 358 to 332 per 100,000 population, resulting in an incidence ratio of 0.93. This reduced incidence appeared to be mainly driven by a lower incidence of heart failure in people between 60 and 84 years of age. By contrast, the incidence in people aged 85 and older had increased substantially over the observation period. Moreover, the authors found that the number of individuals with newly diagnosed HF had increased by 12% and the absolute prevalence (i.e., absolute number of individuals living with heart failure) by 23%. The latter corresponded to approximately 170,000 more patients living with heart failure in 2014 than in 2002 (from 750,127 to 920,616). The authors attributed this very substantial increase to population growth and aging, in addition to more people surviving a myocardial infarction.

This data is consistent with a report from Olmsted County, MN, which demonstrated a significant decline in the age- and sex-adjusted incidence of HF from 315.8 to 219.3 per 100,000 in 2010 (6). Those authors also found that, due to the population growth and increased longevity, the overall prevalence and associated total burden of heart failure had markedly increased.

Other important findings by Conrad et al. are significant increases from 2002 to 2014 in the age (mean ± standard deviation) at first diagnosis of heart failure (from 76.5±12.0 to 77.0±12.9 years), and in the number of comorbid disorders (from 3.4±1.9 to 5.4±2.5). In other words, in addition to a rise in overall number, there appears to be a substantial increase in complexity of HF cases with time in the current cohort. More comorbidities generally mean more clinical events including hospitalizations both for HF and other causes although the comorbidity burden may differ according to age, gender and HF phenotype (7,8). The reported increased comorbidity burden in the work by Conrad et al. is worthy of further comment. Approximately two thirds of subjects suffered from comorbid hypertension, almost half had underlying ischemic heart disease, and 24% had kidney dysfunction or failure. By current definitions 30% to 50% of the adult population suffers from elevated (higher than normal) blood pressure, a number which is projected to increase steadily (3). Hypertension itself is a major cause of heart failure (also reflected in the current study) and ischemic heart disease. Many hypertensives go undiagnosed, and many hypertensives on pharmacological treatment do not meet blood pressure goals defined by guidelines bodies (9). Numerous studies show an association between adherence to guidelines and outcome (10,11). According to recent statistics jointly published by the American Heart Association and American College of Cardiology, one third of the adult population in the US has stage A HF, defined as the presence of predisposing conditions for HF (3).

Different phenotypes of HF are known which are commonly categorized according to the left ventricular ejection fraction (EF), a measure of pump function, and may differ in the way they respond to medical and other therapy (10,12). The current paper by Conrad et al. did not distinguish between heart failure with reduced EF (HFrEF) and midrange (HFmrEF) or preserved EF (HFpEF). Such data would have been of interest because many reports suggest that patients in higher EF categories tend to die more frequently from non-cardiovascular comorbidities than from heart failure and cardiovascular disease (6).

According to Conrad et al., the contemporary burden of HF in the UK corresponds to the burden of the four most common forms of cancer. Comparisons such as these help to put the current paper into context: while mortality from cancer has decreased over recent decades, mortality from HF has not (1,2). It is also worthwhile pursuing the analogy to cancer when it comes to utilization of potentially preventive strategies. Many cancer types do not evolve from longstanding risk factors which are highly modifiable through lifestyle or pharmalogical intervention; rather they result from inherited or spontaneously occurring gene mutations and under the influence of environmental factors which for the most part cannot be modulated.

By contrast, a sizable proportion of HF cases result from longstanding, often inadequately managed hypertension or ischemic heart disease; major cardiovascular disease entities which themselves often evolve from unhealthy lifestyle. In the current paper by Conrad et al. 67% suffered from hypertension, 49% from ischemic heart disease and 28% and 22% from dyslipidemia and diabetes, respectively. Unhealthy lifestyles are modifiable risk factors (as opposed to genetic factors) and therefore present an opportunity for intervention. In fact, data from Olmstead county suggest that ischemic heart disease, hypertension, diabetes, obesity and smoking underlie over half of incident HF cases (13).

In the international REACH registry, the presence of DM conferred a greater risk for HF hospitalization (14). Potentially modifiable, unhealthy lifestyles are more prevalent in lower socioeconomic classes. More deprived people were more likely to develop HF, did so earlier on, and had more comorbidities despite younger age than non-deprived individuals. The widening socioeconomic gap described by Conrad et al. therefore underscores the necessity to strengthen preventive strategies:

Not even half of the adult hypertensive population is meeting guidelines recommended blood pressure treatment goals. The lack of disabling symptoms in stand-alone hypertension may sometimes facilitate a lenient attitude of clinicians and poor medication compliance of patients (15,16).

By contrast, HF is a highly symptomatic, disabling condition. Yet, the possibility to actually prevent HF frequently attracts less public attention than the latest pill or device. This is striking because prevention may well be the most impactful area to improve HF care. The data by Conrad et al. should revitalize efforts to inform and educate the public in order to prevent HF.

The success with antismoking campaigns and subsequent reductions in the number of smokers as well as in the number of myocardial infarctions underscores the feasibility of targeted preventive measures in cardiovascular medicine. The HF community needs to more rigorously develop preventive programs specific to HF and implement these in the population. At age 45 years through age 95 years, lifetime risk for HF is estimated at 20% to 45%, and substantially higher with higher blood pressure and body mass index (3).

HF prevention efforts should target highest risk groups to maximize gain. In general, such programs should enhance public knowledge on HF and center around the value of healthy lifestyle including diets and on physical activity as those are associated with lower risk to develop HF.

Once HF is permitted to advance to symptomatic stages, the prognosis becomes grim. Co-authoring the current study, Jhund et al. reported long-term trends of HF hospitalization for the entire population of Scotland between 1986 and 2004 (17). Although they found modest decreases in first-time hospitalization for HF and case-fatality rates with time, median survival after hospitalization for a first episode of HF remained poor and averaged only just over 2 years (17). Hospitalizations are often recurrent in nature and represent the single most important driver of cost in heart failure care. Research efforts have been made into monitoring and early detection of deteriorating heart failure, with overall mixed results (18).

Taken together, despite a better insight that Conrad et al. provide into the magnitude of the burden caused by heart failure we have to acknowledge the tremendous challenges that follow: the proportion of patients with adequately diagnosed and phenotyped heart failure and on contemporary optimal guidelines-conform medical and non-medical (devices etc.) therapy is just a fraction of what it should be; perhaps at best corresponding to the tip of the “HF iceberg” versus its submerged mass (Figure 1). 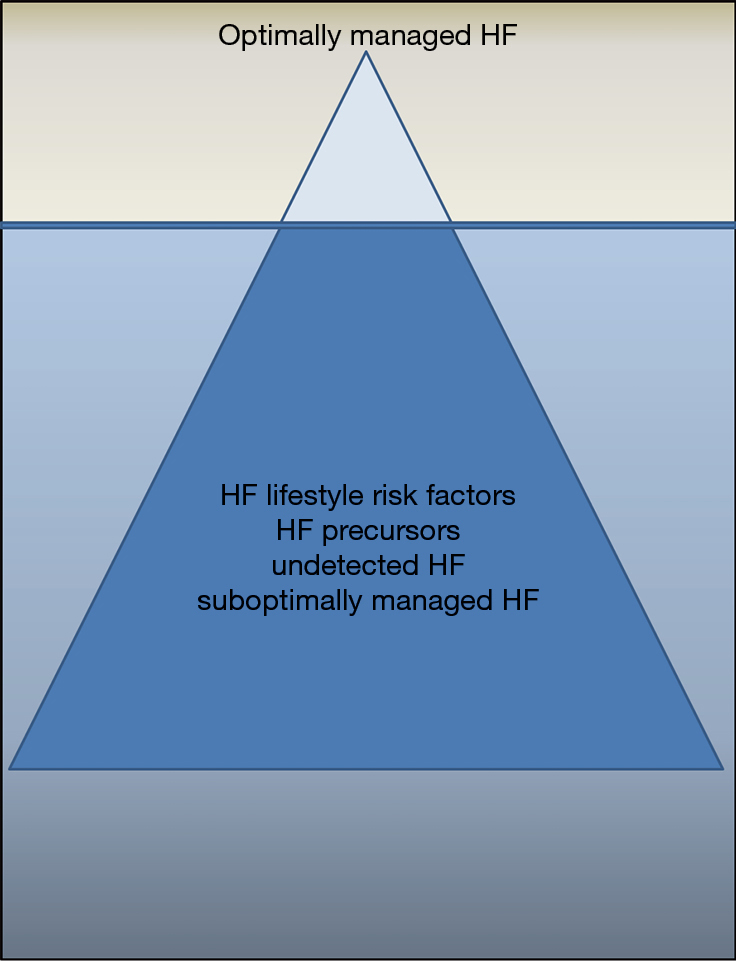 Figure 1 The HF “iceberg”: based on the density of ice versus sea water, the submerged volume of ice below the water surface is almost ten times that above. If one compared the proportion of optimally managed (pharmacologically and otherwise) patients with HF to the proportion of subjects at risk for HF, with undetected HF or with established HF but on suboptimal treatment, those would be comparable to the mass of the tip and that of the submerged portion of an iceberg, respectively. HF, heart failure.

How can the data by Conrad et al. help us to understand and improve our contemporary handling of the problem, and how should this data inform our futures strategies to bring down morbidity, mortality and expenditure caused by HF?

First, the wider public needs to acknowledge the tremendous increase in people living with heart failure and a decreasing ability to care for them due to budgetary constraints and logistical challenges. Quality of HF are should not have to decrease so that caregivers can put up with more patients. As outlined above, we need to increase our efforts to prevent HF through managing preventable predisposing conditions such as hypertension and discourage unhealthy lifestyles leading to obesity (9). If the prevention of HF as deadly and disabling condition was added as primary goal in the management of hypertension treatment, and that goal was clearly communicated to the wider public, likely many HF cases may be prevented. Medication non-adherence may be even greater in HF than in hypertension due to a higher percentage of polypharmacy. Moreover, there is likely going to be a greater discrepancy between the number of subjects living with HF and the number of specialized HF specialists and dedicated HF centers. Other key efforts should include a more timely diagnosis and earlier initiation and up-titration of therapies proven to reduce clinical event rates. Important pathophysiological mechanisms affecting the cardiovascular system may be incompletely modulated by standard medical therapies. Novel dual-acting neurohormonal antagonists, which more comprehensively target important maladaptive processes have been recently introduced into clinical practice (19-21). Most importantly, with global healthcare budgets under strain, disease entities predisposing to HF such as hypertension and ischemic heart disease deserve even greater vigilance.

The work by Conrad is a timely reminder that the medical community needs to step up its efforts to tackle HF. With regards to evolution of specific HF preventive strategies, we are probably only witnessing the end of the beginning.