Surgical management of lung cancer with multiple lesions: implication of the new recommendations of the 8th edition of the TNM classification for lung cancer

The 7th tumour, node and metastasis (TNM) classification of lung cancer had been found to lack clarity on the subject of multiple lung tumours (1). Areas of uncertainty surrounded the definition of a separate tumour nodule and what constituted a ground glass or lepidic lesion. It was, however, published before the official definition of subtypes of adenocarcinoma (2). For the 8th TNM revision, a subcommittee of the International Association for the Study of Lung Cancer (IASLC) Staging and Prognostic Factors Committee was formed to develop recommendations to classify lung cancer with multiple pulmonary sites (3). After analysis of the IASLC database from1999 to 2010 and a comprehensive literature review four unique patterns of presentation have been categorized:

Each of these groups exhibit different biological behaviour with contrasting patterns of recurrence and survival. For each category there is a role for primary surgery ahead of systemic chemotherapy or targeted therapy or local control by radiotherapy. However, an understanding of the unique characteristics in each category can be used to guide surgical management.

By definition, these must be unrelated tumours either by virtue of a different histological subtype or different morphology assessed by comprehensive histological assessment (grade, subtype). Different biomarker patterns and different driver gene mutations are also used to distinguish between the two. Thus, obtaining an adequate preoperative tissue diagnosis by percutaneous or bronchoscopic biopsy is imperative. It must be noted that two tumours with the same basic histological type may still represent separate primary tumours.

Following the release of the 8th edition of the TNM lung cancer staging system, each tumour should be classified separately with a separate T, N and M descriptor. Survival is significantly better in pN0 cases; thus, every attempt should be made to thoroughly stage the mediastinum preoperatively. Indeed, the prognosis of stage I SMPNSCLC has been found not to be significantly different from that of stage I solitary PNSCLC (4). The reasons for this finding include: (I) the stage I SPNSCLC had no lymph nodes and distant metastasis, and the prognosis was relatively good; and (II) adenocarcinoma was the main pathological type. Since pneumonectomy is associated with increased mortality, consideration should be given to segmental resections in cases of ipsilateral but separate tumours. Lung-sparing resections (wedge resection or segmentectomy) of at least one lesion is advised in cases of synchronous multiple primary lung cancers. Pneumonectomy should be avoided (5). Similarly, morbidity can be reduced by performing staged procedures in bilateral disease. Survival is worse than for the individual tumours alone, reported as 34% 5-year survival. Detailed assessment of predicted postoperative lung function is a prerequisite. The additional effects of bilateral chest wall dysfunction should also be considered (6). 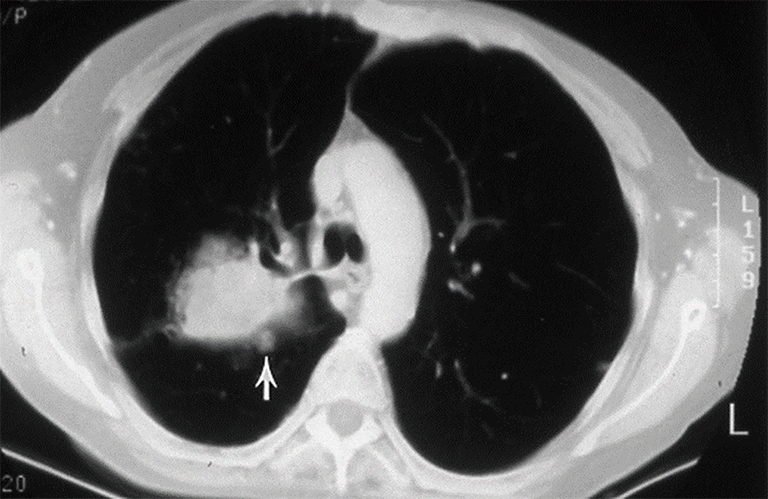 The classification of the 7th TNM edition was maintained: these tumours should be classified according to the location of the separate nodule relative to the index tumour—T3 for a same-lobe, T4 for a same-side (different lobe), and M1a for another-side location—with a single N and M category (1). There is decreasing survival reported for nodules: in the same lobe (T3); in the same lung (T4) or in the other lung (M1a). The data from the 8th TNM revision does, however, suggest that a separate tumour nodule (in any location, including the contralateral lung) with the same histological features does not necessarily mean that cure is not possible. The data for resected patients, from both the IASLC database and the published literature, show a substantial number of 5-year survivors, regardless of the location of the separate tumour nodule. Furthermore, survival appears to correlate with the proportion of patients who underwent resection. The median postoperative survival may be as high as 25 months with a single pulmonary metastasis, reducing to only 14 months in the presence of extrathoracic metastases (7,8).

Surgical management should begin by confirming the assumption of intrapulmonary metastatic disease, rather than a separate primary, by histological means. This may mean percutaneous biopsy or minimally invasive wedge resection. Mediastinal nodal involvement should preclude resection and therefore demands invasive diagnosis by endobronchial ultrasound (EBUS) or mediastinoscopy.

Local control should be directed at the primary tumour with anatomical resection. The metastasis requires less aggressive parenchymal resection and wedge excision is justified.

The end of “bronchioloalveolar carcinoma (BAC)”

The finding of a diffuse form of lung cancer extending without invasion or destruction of alveolar walls was first described in a pattern referred to as “BAC” in 1953. This pathological non-invasive pattern of growth along the alveoli was described as “lepidic”. For many years and by many clinicians to the present day, BAC has been and still is used to describe tumours that contain a lepidic component with or without an additional invasive component. The 1999 and 2004 editions of the World Health Organization (WHO) classification of lung tumours restricted the term BAC to single purely lepidic tumours without any evidence of invasion. Unfortunately, this new definition only increased confusion; thus, in 2011, the term BAC was abandoned altogether because it was being used ambiguously in many different contexts (2). 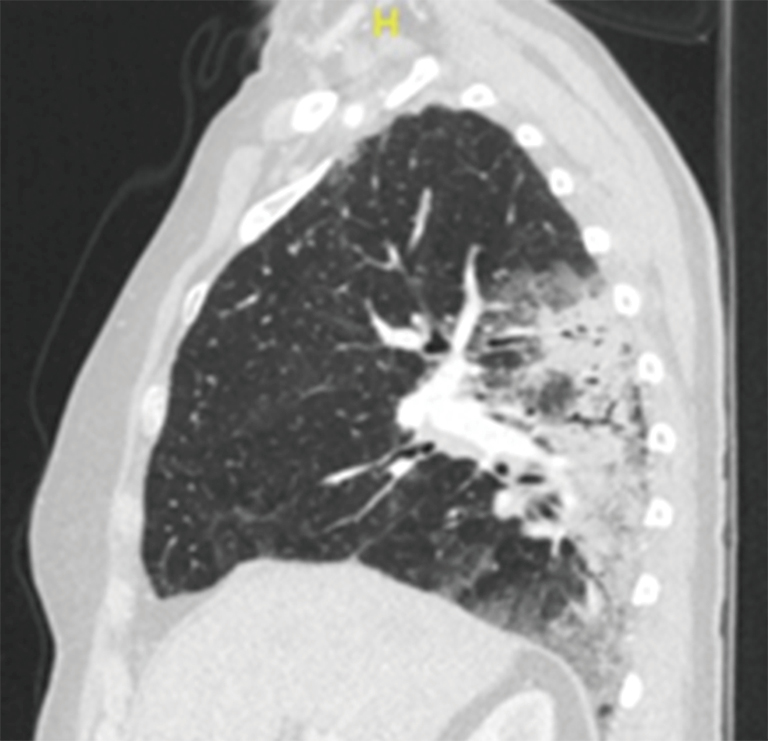 This entity typically presents radiologically with varying areas of ground glass (GG) and consolidation, although the appearance is more regional and patchy than nodular. Microscopically, these tumours are typically invasive mucinous adenocarcinomas with a predominance of lepidic growth. In recognition of their distinct entity as a single tumour with diffuse parenchymal involvement, the 8th TNM revision has assigned a T category by size (or T3) if in one lobe or as T4 if involving an ipsilateral different lobe. Whilst they are typically pN0 and cM0, the presence of contralateral diffuse consolidation or foci of GG or lepidic (GG/L) changes are classified as M1a.

It may be that this entity is an aggressive end of the multiple GG/L pattern, but in general this category is associated with poorer survival and resection does not seem to alter the very poor prognosis of this disease, which inevitably progresses to consolidation of both lungs and death from respiratory failure. While disease progression is relatively slow, death is more frequently related to bilateral pulmonary involvement than extrathoracic metastasis. However, as systemic therapy has also been relatively ineffective in this disease, surgery may be considered the best available option. There may be some benefit from relief of the effects of mucin filling alveolar spaces causing symptoms of bronchorrhea and the hypoxic effects of intrapulmonary ventilation:perfusion (V:Q) mismatch and shunting. Therefore, conventional pulmonary function selection criteria may not be applied as resection may have physiological benefit. Surgical management should include preliminary bronchoscopy to exclude an obstructive tumour as a cause for the consolidatory appearance. Sublobar resections are rarely indicated, with lobectomy the standard treatment. There may be an indication for pneumonectomy in T4 disease as outlined above. As nodal or systemic metastases are rare, bilateral lung transplantation has been suggested as a potential treatment option with survival similar to that for other lung transplant indications (9). 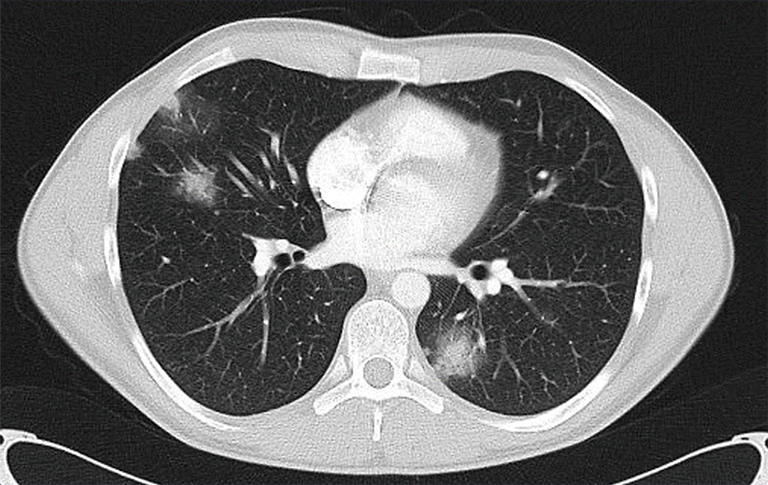 The multifocal GG/L category applies to multiple subsolid nodules due to tumours that are lepidic or minimally invasive or in-situ adenocarcinoma. They often occur in female non-smokers and typically have a decreased likelihood of nodal or distant metastases compared with larger solid lesions. However, they are associated with an increased likelihood of further subsolid cancers. The diagnosis of this category is likely to be based on radiological rather than histological criteria.

Exclusion criteria for this definitive category include: multiple ground glass opacities (GGOs) alone; 5-mm or smaller GGOs and foci of adenomatous hyperplasia. Adenocarcinoma must be present in one or more lesions.

In the 8th TNM revision, the T category is determined by the dimensions of the largest T lesion, with either the number of tumours or preferentially simply the suffix (m) to denote the multifocal nature. This is irrespective of which lobes are involved.

The long-term outcomes of resection are very good and better than those of the first two categories above: NSCLC with separate solid tumour nodules or solid second primary NSCLCs. Overall 5-year survival may be as high as 80% with subtypes other than lepidic predominant (P<0.001) and lymph node involvement (P=0.002) identified as independent unfavourable prognostic factors (10).

For patients with small-sized and well-differentiated lesions, such as pure GGOs (pGGOs) <2 cm and adenocarcinoma in situ/minimally invasive adenocarcinoma (AIS/MIA), 5-year survival might not necessarily be compromised by sublobar resections (segmentectomy and wedge resection), a one-stage bilateral procedure might be suitable.

For patients with poorly differentiated (e.g., solid predominant and mucinous adenocarcinoma) or bilateral advanced-stage lesions (e.g., mixed GGO containing >50% solid component), GGO located deep or multiple nodules in one lobe, a two-stage bilateral lobectomy with a short interval of 4–6 weeks might be preferred (11).

Limited resections, such as segmentectomy or a wide wedge resection, for small (≤2 cm) less invasive histology (AIS or MIA) appearing as GGO on CT scan, are oncologically equivalent to standard lobectomy. Extensive lymph node dissection may not have additional staging or prognostic benefit (12).

As this category can describe subsolid nodules that are either part-solid or pGGOs, the surgical treatment is more controversial. There is evidence to support a conservative, non-resectional approach to these pGGO lesions. In a series of surgical cases of multiple GGOs, neither growth of the residual GGOs, nor the development of new GGOs, nor whether or not all GGOs were treated had an affect survival. Poor prognosis was related to larger size and solidity of the main tumour (13). In a recent series of 53 patients whose lesions had a mean GGO ratio of 95.9%, all tumours were intraoperatively diagnosed as BAC and the 5-year overall survival rates were 100% even though wedge resection was preferred (14).

There appears to be no survival difference for resected GGOs between multiple limited resections vs. anatomical resection with or without additional limited resection: 5-year overall survival not significantly different (100% and 91.9%, P=0.2287) (15).

There may be a misconception that the presence of multiple tumours indicates inevitable unresectability and is an indication for non-surgical first-line treatment. Surgery has benefits over stereotactic radiotherapy, including accurate histological assessment of the primary with assessment of biomarkers together with accurate staging of regional lymph nodes. Therefore, there is an indication for surgical resection in all categories of multiple lesions, but the surgical strategy is different in each (Table 1). Nevertheless, there are some important overriding principles.

The importance of obtaining a pre-resection tissue diagnosis of all lesions is emphasized in the separation of multiple synchronous primary tumours from intrapulmonary metastases.

Parenchymal conservation, whilst achieving a margin at least as large as the tumour, is important in the treatment of intrapulmonary metastases and multifocal GG/L subsolid tumours. In the context of likely local tumour progression over exuberant sacrifice of functioning lung tissue may actually preclude subsequent surgery due to difficulty in maintaining intraoperative oxygenation.

We await the three prospective trials (JCOG0804 and JCOG0802 in Japan and CALGB 140503 in North America) that randomize such patients to either lobectomy or sublobar resection. Pending these findings, it is reasonable to advocate sublobar resection for smaller tumours (<2 cm) with a lower consolidation tumor (C:T) ratio reserving anatomical lobectomy for larger (>2 cm) solid tumours.

pGGO tumours with no solid component may be observed in light of their relatively benign profile.

Pneumonectomy should generally be avoided due to its associated risk and poor prognostic association. However, in extensive pneumonic-type adenocarcinoma it may be appropriate palliation.

A selective approach to lymph node analysis may be acceptable. More intensive assessment of mediastinal nodal involvement is indicated in possible synchronous primary tumours and where intrapulmonary metastasis is suspected. Less aggressive management, omitting extensive intraoperative nodal dissection, may be considered in the management of multiple GG/L lesions.

Finally, it is important to state that the TNM classification is not a prescription for clinical management. The staging system is only a method of classifying the anatomical extent of the tumour and prognosis also depends on many other factors.