Lobectomy with mediastinal lymph node dissection has been the standard procedure for removing early-stage non-small-cell lung cancers (NSCLCs). Recently, however, detection of small peripheral lung nodules, such as ground-glass nodules (GGNs), is increasing. Pure or partly solid GGNs are not associated with angiolymphatic invasion, so the intentional indication of sublobar resection for such lesions has been increasing. In contrast, a compromised indication of sublobar resection in high-risk patients, including octogenarians, those with poor pulmonary reserve, and patients with multiple ling cancers, has been increasing.

Although sublobar resection includes segmentectomy and wedge resection, the intention of each procedure is quite different. Lung anatomical segmentectomy has some advantages over wedge resection in that it obtains a sufficient surgical margin and enables evaluation of hilar nodes. Segmentectomy, however, is a more difficult procedure than wedge resection or lobectomy. In addition, the preoperative planning and decision making for segmentectomy are different for each surgeon. Intraoperatively, the surgeon must choose how to divide the lung parenchyma. Among the various methods for dividing lung parenchyma, non-anatomical division is the simplest, although atelectasis of residual lung or an insufficient surgical margin after parenchymal division may occur. To avoid these situations, the intersegmental plane must be identified correctly during the operation. Hence, there are some issues of video-assisted thoracic surgery (VATS) segmentectomy. We describe the novel techniques that have been devised for accomplishing VATS segmentectomy of small, peripheral NSCLCs.

Early on, the operative indication for performing segmentectomy had been to address benign lung tumors such as bronchiectasis, tuberculoma, and aspergilloma (1-3). Since 1960, the standard surgical procedure for early-stage lung cancer was lobectomy with mediastinal lymph node dissection (4). In 1995, Ginsburg et al. reported a prospective, randomized, controlled trial that evaluated lobectomy versus limited resection for T1N0 NSCLC (5). The trial showed that, compared with lobectomy, limited resection was associated with a higher incidence of local recurrence and a poorer prognosis. Since then, the standard procedure for early-stage NSCLCs has been lobectomy with lymph node dissection. However, there were some limitations in that report. One is that many wedge resections were included in a limited resection group. The other is that many large tumors (nearly 3 cm), for which it was difficult to obtain a sufficient surgical margin by limited resection, were included in the limited resection group.

Since 2000, there have been some positive data on segmentectomy for selected patients (6-8). In addition, many pure GGN lesions, which are almost always non-invasive, have been detected by low-dose computed tomography (CT) screening. For pure GGN lesions with a consolidation-to-tumor ratio of <0.5—which includes pathological adenocarcinoma in situ and minimally invasive adenocarcinoma—sublobar resection may be suitable for curative resection if a sufficient surgical margin is obtained (9). In contrast, the use of segmentectomy for radiologically invasive lung cancer (consolidation-to-tumor ratio >0.5) has been controversial. In Japan, a multicenter Japanese trial—A Phase III Randomized Trial of Lobectomy Versus Limited Resection for Small-Sized Peripheral Non-Small Cell Lung Cancer—has been recruiting patients with NCLCs of ≤2 cm that are radiologically peripherally invasive (10). That study has now been closed to registration, and we are looking forward to its results on whether a segmentation procedure is indicated for invasive lung cancers.

Lung segmentectomy is basically a lung preservation procedure. We sometimes perform VATS segmentectomy in compromised individuals, including octogenarians, patients with poor pulmonary reserve, and others at high risk.

Patient selection and preoperative planning of the procedure is important when segmentectomy is chosen. Insufficient surgical margins may lead to local recurrence at the cutting surface. Shuchert et al. showed that, for patients with stage I NSCLC, recurrence was more frequent in those whose deflated margin/tumor ratio was <1 (11). As a rule, we currently plan VATS segmentectomy for patients whose preoperative evaluation indicated the possibility of a surgical margin that was greater than the tumor size. Previously, when planning segmentectomy, we analyzed more anatomical structures on the distal side than when planning lobectomy and chose a surgical procedure based only on axial, coronal, and sagittal view of CT images (Figure 1A). We could then imagine the intersegmental plane and could judge whether the surgical margin was sufficient. Recently, however, multidetector-row computed tomography is routinely performed preoperatively. Using these data, we obtain three-dimensional simulation of the vascular structures, the segmental bronchus, and tumor using simulation software (Volume Analyzer Synapse Vincent; Fujifilm Medical Systems, Tokyo, Japan). Based on these data, we can then easily understand the anatomical variances in each patient. In addition, the simulation workstation allows us to create a virtual intersegmental plane after plotting the dominant segmental pulmonary artery and to measure the surgical margin from the tumor to the closest intersegmental plane (Figure 1B) (12). This workstation allows proper preoperative planning for each patient. 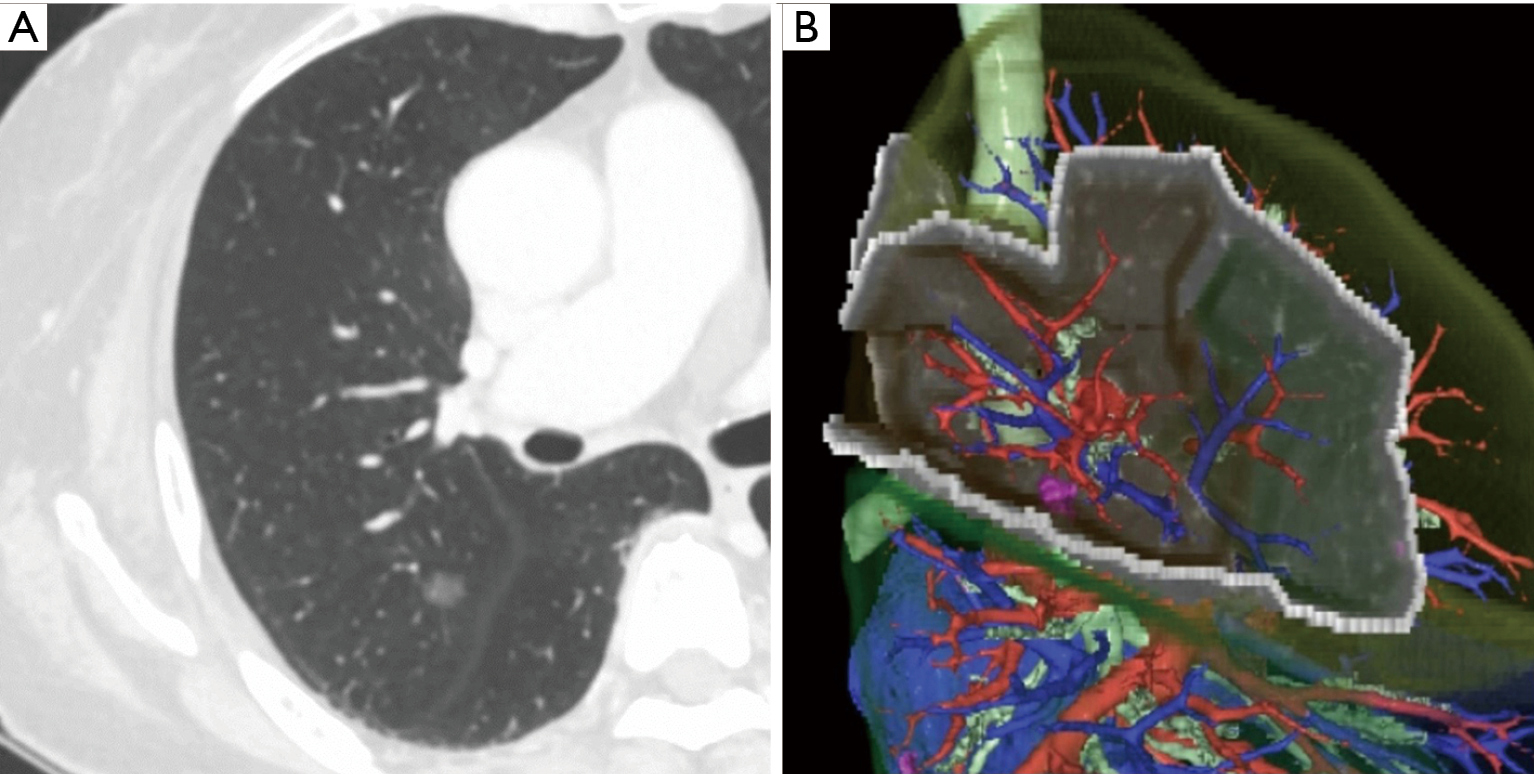 Figure 1 Preoperative evaluation. (A) Thin-slice computed tomography shows a part solid ground-glass nodule (GGN) in right segment 2a; (B) a virtual intersegmental plane can be established.

We believe that segmentectomy is indicated for radiologically non-invasive NSCLCs such as those with a GGN appearance. If the GGN is located at ≥1 cm depth from the lung surface, it is generally difficult to palpate. Several techniques have therefore been described that allow preoperative marking of hardly palpable nodules, with a CT- or bronchoscope-guided technique mainly performed. CT-guided marking techniques that use percutaneous hookwire placement or dye injection are the most common (13,14). However, puncturing the visceral pleura (VP) is an associated hazard that may result in complications such as air embolism (15,16). To avoid these complications, we earlier reported a new marking technique that does not require VP puncture (17,18).

Bronchoscope-guided marking techniques can be performed without puncturing the VP (19,20). Sato et al. described the use of visually assisted lung mapping for anatomical segmentectomy (19). Bronchoscopic, multi-spot dye markings are set preoperatively, and the resection line is established using these markings. These marking techniques, however, require both expensive equipment and expert skills. Recently, marking techniques are being performed just before surgery in a hybrid operating room equipped with cone-beam CT or electromagnetic navigation bronchoscopy (21-23). These methods can effectively localize tumors and identify the resection line along the intersegmental plane.

There are some limitations of the selective segmental inflation methods. Identifying the demarcation of the intersegmental plane is sometimes difficult in the patient with emphysema, and the technique depends on the skill of the anesthesiologist (Figure 2). In addition, once segmental is inflated insufficiently, it blocks visualizing the operative field during VATS, making it difficult to close the lung parenchyma using staplers.

Sekine et al. reported transbronchial injection of indocyanine green (ICG) for demarcation (27). With this method, the authors confirmed the intersegmental plane not only at the surface but also in lung parenchyma. In our experience, however, the injected air or ICG spreads to adjacent segments over the intersegmental border via Kohn’s pores. Thus, demarcation may not be correct using these techniques.

Another way to identify the intersegmental plane is to use the segmental pulmonary artery. Misaki et al. reported that near-infrared thoracoscopy with ICG makes it possible to identify the targeted lung segment easily and quickly without the need for lung inflation (28). ICG may also be used to assess liver function.

Figure 3 Indocyanine green fluorescence images and the final aspect. (A) Right segment 2 appears dark, and the residual segment appears bright. The border between these two areas is recognized as the intersegmental plane (arrows); (B) final aspect after thoracoscopic right segment 2 segmentectomy.

In 2016, we reported our initial results of ICGF-navigated thoracoscopic segmentectomy (29). We concluded that this method was feasible but had some limitations. First, ICG may be rapidly washed out, resulting in the loss of staining. Second, in difficult settings, such as severe anthracosis on the lung surface, visualizing a clear contour pattern could be problematic because of the hypovascularity of the lung surface. Third, ICGF spreads into target segments, resulting in reduced clear contrast. Fourth, although ICGF could be observed on the lung surface, it could not be seen on the ongoing dissection plane. Fifth, marking the demarcation line with electrocautery had to be performed carefully because the background is dark in ICG mode. Currently, some companies have released near-infrared thoracoscopy equipment that merge visible light images with the fluorescent images on display (Figure 4). Surgeons can make their personal choices about using them.

The most important issue with segmentectomy is how to choose the proper surgical margin. To address this issue, we should do more to achieve proper selection of the patient, and the most advantageous surgical procedure for that patient, to avoid local recurrence after segmentectomy. Selected patients who undergo segmentectomy should survive without recurrence using surgical treatment alone.