Asthma is recognised as an allergic disease, usually starting in childhood, characterized by reversible airflow obstruction with episodic course and favourable prognosis in general, due to good response to anti-inflammatory treatment. On the contrary, chronic obstructive pulmonary disease (COPD) is typically caused by tobacco smoking, develops after the fourth decade of life and displays incompletely airflow obstruction, resulting in progressive decline in lung function and premature death. American Thoracic Society (ATS), in their guidelines of 1995 (1) defined asthma, chronic bronchitis, emphysema, COPD, airflow obstruction and identified 11 distinct syndromes. There was an overlap at 6 of these 11 syndromes.

In another recent study from Spain, as well, Soler-Cataluña et al. defined the clinical phenotype known as “overlap phenotype COPD-asthma” (4). For this diagnosis were established two major and two minor criteria. Major criteria include very positive bronchodilator test (increase in FEV1 ≥15% and ≥400 mL), eosinophilia in sputum and personal history of asthma. Minor criteria include high total IgE, personal history of atopy and positive bronchodilator test (increase in FEV1 ≥12% and ≥200 mL) on 2 or more occasions (4). However; these criteria are neither specific nor sensitive. Airway eosinophilia is not exclusive to asthma and is present in COPD patients (5). Furthermore, a clinically significant bronchodilator response (≥15%) can be elicited in the majority of COPD patients (6).

Louie et al. (8), in another review (8) prefer the following major criteria for ACOS: a physician diagnosis of asthma and COPD in the same patient, history or evidence of atopy, for example, hay fever, elevated total IgE, age 40 years or more, smoking >10 pack-years, postbronchodilator FEV1 <80% predicted and FEV1/FVC <70%. Minor criteria were a ≥15% increase in FEV1 or ≥12% and ≥200 mL increase in postbronchodilator treatment with albuterol.

Based on all these similarities and differences on the definition of the overlap syndrome-ACOS, it is therefore understandable that further clinical research is required in this topic.

COPD concerns 14.2 million adults in the USA with an estimated additional 9.8 million who may have COPD but are undiagnosed (National Health Interview Survey, 2010) (9,10). A total of 25 million Americans (18 million adults and 7 million children) have asthma (11). COPD is a deadlier disease than asthma. Nine patients with asthma die each day in the USA (11), while 377 patients die due to COPD. The 30-day mortality for hospitalized severe acute exacerbations of COPD is greater than that of acute myocardial infarction (26% vs. 7.8%) (12). Although airway obstruction is common feature in asthma and COPD, these obstructive diseases have a lot of differences in clinical practice. However, we can notice a pathologic and functional overlap between them (overlap syndrome), especially among the elderly. As we have already mentioned, Soriano et al. showed that the frequency of ACOS increases with advancing age, with an estimated prevalence of <10% in patients younger than 50 years and >50% in patients aged 80 years or older (2). Patients with overlap are either smokers with asthma or nonsmokers with long-standing asthma who progress to COPD, usually. Similar results on the age distribution were found by de Marco et al. (13), in general Italian population. They showed, through a screening questionnaire, that prevalence of asthma-COPD overlap was 1.6%, 2.1% and 4.5% in the 20-44, 45-64, 65-84 age groups, respectively.

There are three common clinical characteristics in obstructive pulmonary diseases: airway inflammation, airway obstruction and bronchial hyperresponsiveness (BHR). Chronic inflammation is considered to be mainly eosinophilic and driven by CD4 cells in asthma, while it is neutrophilic and driven by CD8 cells in COPD (14,15). Nonetheless, noneosinophilic and neutrophilic asthma has been reported too, which displayed resistance in steroids (16,17). Smokers asthmatics have elevated neutrophils in their airways, similar to COPD. Smoking promotes neutrophilic inflammation which in turn causes increased corticosteroid resistance (18,19). On the contrary, eosinophilic inflammation has been observed in some COPD patients and is correlated with greater reversibility of obstruction when steroids are given (20). When randomly selected asthmatics with incomplete reversibility are studied, we can notice elevated neutrophils in their airways and additionally the intensity of neutrophilia is related with the FEV1 decline (21-23). Furthermore, it has been already proven from histopathological and other studies that inflammation concerns all airways, large (>2 mm in diameter) and small distal (<2 mm in diameter), even the lung tissue, in both COPD and asthma patients (24,25).

In obstructive pulmonary diseases and in overlap syndrome, we can notice the remodeling phenomenon. Remodeling consists of: mucosal edema, inflammation, mucus hypersecretion, formation of mucus plugs, hypertrophy and hyperplasia of the airway smooth muscle. The increased wall thickness, as it can be seen on high resolution CT of patients with overlap (27), results in airway obstruction in most airway diseases (28,29), and it is more prominent in asthma, in comparison with COPD (30). Furthermore, increased airway wall fibrosis is reported in both asthma and COPD (31-33). Airway remodeling occurs throughout the whole respiratory tract, but remodeling of the small airways is largely responsible for the decline in lung function in COPD and long-standing asthma (34). It will therefore be understandable that pharmacokinetic strategy should focus in small airways. In long-standing asthma that previously mentioned, we can notice incompletely reversible airflow obstruction, as it happens in COPD (35,36). Concerns mainly asthmatics, older, male with increased risk of death (27,37) It is impressive the fact that 16% of asthmatics had developed incomplete airflow reversibility after 21-33 years of follow-up, as a longitudinal study showed (38).

BHR is the exaggerated response to a variety of stimuli which can cause bronchospasm and can be present in inflammatory airway diseases. Such stimuli are: pets, pollen, bugs in home, fungus, dust, strong odors, cold air, pollution, smoke, chemical fumes, exercise, anger, stress, etc. It is believed that the person that develops BHR to various stimuli, will develop bronchodilator response after proper treatment, as well. This happens due to the fact that both bronchoconstrictor and bronchodilator response reflects the same underlying disease, and we can observe it in asthma and COPD (39,40). In fact, in severe obstruction, bronchospasm provocation tests are contraindicated (41), and have been replaced with reversibility tests, for security reasons. BHR can be noticed in almost all patients with asthma, especially in those with symptoms and in up to two third of COPD patients (42). In order to recognise overlap syndrome in COPD patients with airflow obstruction we can use provocation tests with proper agents that do not cause direct airway smooth muscle contraction, such as histamine, mannitol, adenosine, hypertonic saline. BHR raises its prevalence with the age and smoking and is present in up to 10-20% of general population, often being asymptomatic (43,44). SAPALDIA study (Study on Air Pollution and Lung Diseases in Adults) proved that 17% of general population had BHR to methacholine and 50% of them were asymptomatic, hence a 9% had asymptomatic BHR (45). Furthermore, asymptomatic BHR is a risk factor for developing asthma and COPD and is associated with new symptoms of wheezing, chronic cough, annual decline in FEV1 and new diagnosis of COPD after 11 years of follow-up (46). Smoking in turn leads to increased risk of establishing BHR (47,48), while the severity of BHR is highly correlated with severe symptoms and great decline in FEV1, in asthmatics and COPD patients (42,49).

Asthma and COPD are punctuated by exacerbations, but overlap syndrome may be associated with three times the frequency and severity of exacerbations (50,51). Exacerbations increase morbidity, mortality and the economic burden of disease, as 50-75% of COPD healthcare cost in the USA is due to the treatment of acute exacerbations (1). Severe to very severe COPD patients experience 2 or more exacerbations annually, as much as asthmatics experience (52), while overlap patients suffer from significantly more exacerbations, up to 2 or 2.5 times as many as those with lone COPD (50). Further up, Menezes et al. evaluating the PLATINO study population showed, among other, that subjects with asthma-COPD overlap had higher risk for exacerbations [PR 2.11; 95% confidence interval (CI): 1.08-4.12], compared to those with COPD (53). Exacerbations are triggered by viral, mainly, or bacterial tract infection and can lead to accelerated loss of lung function (54). Thus, the phenotype of frequent exacerbator must be studied further.

Why does overlap happen?

Having already analyzed all the potentially important common risk factors for overlapping asthma and COPD, such as increasing age, smoking, BHR, inflammation, remodeling and exacerbations, the big question is why does overlap happen. “Dutch hypothesis” tries to answer the question, stating that asthma and BHR predispose to COPD later in life and that asthma, COPD, chronic bronchitis, and emphysema are different expressions of a single airway disease. Furthermore, the presence of these expressions is influenced by host and environmental factors (55). Epidemiological studies, on the other hand, proved a correlation between respiratory illnesses during childhood and impaired adult lung function (56). Knowing that airway growth starts in utero, fetal or childhood exposures may contribute to adult asthma or COPD (57).

Quality of life and hospital burden

Quality of life maybe is not considered a very important parameter for doctors and researchers, but it is crucial for patients. Kauppi et al. (59), based on patient-reported outcomes and retrospective medical record data, divided a patient population of 1,546 subjects into three groups: (I) asthma only; (II) COPD only; (III) asthma-COPD overlap and they focused in health-related quality of life (HRQoL). In the overlap group HRQoL was the poorest of all. In the logistic regression model, with the asthma group as the reference, both the overlap and the COPD group showed higher risk for low HRQoL [odd ratio (OR): 1.9; 95% CI: 1.2-3.2; and OR: 1.8; 95% CI: 1.0-3.2; respectively]. It is clear that overlap was associated with low HRQoL, when compared with asthma or COPD only. Miravitlles et al. (60), analysed data from the EPI-SCAN study, an epidemiological study in Spain that included 3,885 subjects previously diagnosed with asthma. 17.4% of them were classified with the asthma-COPD overlap phenotype and it was found that they had more dyspnea, wheezing, exacerbations, reduced levels of physical activity and worse respiratory-specific quality of life (11.1 units on the St. George’s Respiratory Questionnaire-SGRQ, 95% CI: 4.88-17.36). Discussing about hospital impact we have already mentioned Menezes et al. (53) before, who evaluated PLATINO study population and found that patients with overlap were at higher risk not only for exacerbations, but for hospitalization as well (PR 4.11; 95% CI: 1.45-11.67), compared to COPD patients. Furthermore, Andersén et al. analysed data from hospitalisations of Finnish people in a period between 1972 and 2009, covering in number the entire Finnish population (5.35 million in 2009). They focused on patients with primary or secondary diagnosis of asthma or COPD and they found that average number of treatment periods during 2000-2009 was 2.1 in asthma, 3.4 in COPD and 6.0 in overlap syndrome (61).

In summary, it has been already understood the specificity of a separate clinical entity called ACOS. Even though ACOS develops indistinct clinical and pathophysiological features that often are complicated with those of asthma or COPD, we must emphasize the importance of the syndrome. Studying further the syndrome may we discover mechanistic pathways leading to the development of COPD. And this is important because it is widely known that patients with COPD often are underdiagnosed, possibly for decades. By recognizing common risk factors it will, maybe, become possible to understand and modify the progressive deterioration of lung function, which leads to COPD (Figure 1). 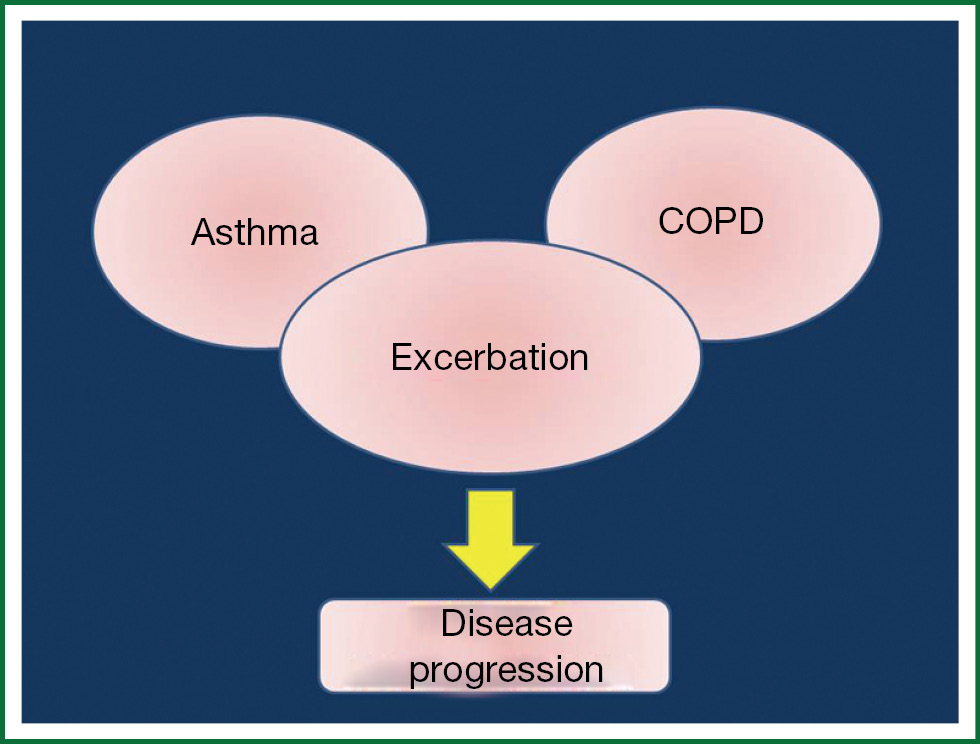