Stanford type A acute aortic dissection (AAD) carries a high risk of mortality and morbidity and may require surgical correction to avoid cardiac tamponade and sudden aortic rupture (1,2). Often, patients undergoing surgery for AAD bleed excessively and require blood products and transfusions (3-5). Thus, early diagnosis and coagulation correction may improve patient prognosis. Recently, volatile anesthetics have been studied for their negative effects on platelet aggregation (6,7). Xenon as an inhaled anesthetic is under study, and animal and human data suggest that it has a lack of organ toxicity, allows for rapid recovery, and has cardiovascular-stabilizing effects (8-11). Abraini’s group (12) reported that xenon inhibits tissue plasminogen activator (tPA) using molecular modeling and in vitro and in vivo studies. de Rossi’s group (13) reported that xenon did not affect unstimulated or agonist-induced human platelet function in vitro, and Horn and his team (14) reported that xenon monoanesthesia did not cause pathological alterations in coagulation factors in healthy pigs. The effect of xenon on physiopathology and mechanisms of AAD and surgery-induced coagulopathy have not been studied preoperatively or during and after surgery. Thromboelastography (TEG) (15) is commonly used to assess whole blood coagulation and to provide information about platelet function and fibrinolysis. Thus, we studied the effects of xenon on coagulation using TEG and conventional hemostatic tests for patients with AAD undergoing aortic arch surgery with cardiopulmonary bypass (CPB)/deep hypothermic circulatory arrest (DHCA).

We studied perioperative clinical variables and serological results from 50 subjects who underwent pulmonary static inflation with 50% nitrogen/50% oxygen from January 2013 to January 2014 and 50 subjects who underwent pulmonary static inflation with 50% xenon/50% oxygen from January 2014 to December 2014 during CPB for Stanford type A AAD in a single center clinical trial. Some data came from previously published statistics (11). Investigators were not blinded to experimental groups but patients and technicians who performed assays were blinded to groups. The clinical trial was registered in the Chinese Clinical Trial Registry (ChiCTR-ICR-15006435) and approved by the Beijing Anzhen Hospital Clinical Research Ethics Committee (identifier: 2013027). A diagnosis of AAD was confirmed for all patients by history, chest radiography, transthoracic ultrasound, and contrast-enhanced computed tomography (CT) or magnetic resonance imaging (MRI). Dissection was considered AAD if the time from the onset of symptoms to surgery was 14 days or less. This study only included type A AAD according to the Stanford classification (2,16). Medical quality 50% xenon was provided by Wuhan Newradar Special Gas Co. LTD (Wuhan, China).

Patients, aged 18–70 years-of-age, with acute type A AAD undergoing emergency surgery with CPB/DHCA in our hospital were enrolled. Exclusion criteria were coronary heart disease; heart failure; severe cardiac tamponade; unstable hemodynamics; nervous system abnormalities; clinically apparent malperfusion (17) including severe malperfusion in the lower limb, brain, heart, and kidney; visceral ischemia; and lack of written informed consent. In brief, all patients were class Aa according to the Penn Classification (18), which is the absence of branch vessel malperfusion or circulatory collapse. No patient was prescribed nonsteroidal anti-inflammatory drugs or corticosteroids before or after admission. After written informed consent, 100 patients were blinded to receiving either 50% xenon/50% oxygen (xenon group, n=50) or 50% nitrogen/50% oxygen (control group, n=50) during CPB.

Demographic and hemodynamic data were recorded immediately after admission. To avoid aortic rupture, systolic blood pressure was controlled between 100 and 120 mmHg with oral β-blockers and infusion of vasodilators (e.g., nitroprusside) before surgery. In all cases, total intravenous anesthesia was performed with sufentanil and propofol, and BIS was maintained at 45–55. After CPB, the aorta was cross-clamped and mechanical ventilation was stopped, lungs were inflated with 50% xenon/50% oxygen (xenon group) or 50% nitrogen/50% O2 (control group) to maintain an airway pressure of 5 cmH2O. Pulmonary static inflation with 50% xenon or 50% O2 was stopped 15 min before aortic de-clamping and cardiac resuscitation. After CPB, tranexamic acid, lyophilized human fibrinogen and lyophilized human prothrombin complex concentrate were used to improve coagulation according to TEG and conventional hemostatic tests. Blood products were transfused to maintain a post-CPB Hb >7 g/L and to correct coagulopathy after normalizing TEG with fresh frozen plasma and platelets. Coagulation and fibrinolysis were measured prior to surgery and 10 min and 6 hours postoperatively.

Surgical procedures described by Sun were used (19,20). In brief, all patients underwent CPB with DHCA and unilateral selective antegrade cerebral perfusion (USACP). When the nasopharyngeal temperature reached 20–25 °C, circulatory arrest was established and a stent graft was implanted. Then, a four-branch prosthetic graft was used for arch replacement. Valve-sparing root resection (aortic valve plasty, Valsalva sinus plasty, or the David procedure) or composite valve graft replacement was performed according to the subtype of the aortic root (A1, A2, or A3).

The sample size was selected to detect differences in perioperative TF values between the two groups. Sample allocation ratio was 1, and time- points were 3, and test for two means in a repeated measures design was used. With a 5% (two-sided) type I error rate, based on preliminary experiments, 50 patients per treatment group were needed to detect a 0.8 difference between two groups, assuming a standardized deviation of 1.5. The power was from 90–93% as an autocorrelation from 0.4 to 0.5 accordingly. The final sample size was 100 patients (50 patients/group) (Power Analysis and Sample Size, PASS v11.0, NCSS, LLC; Kaysville, UT, USA). 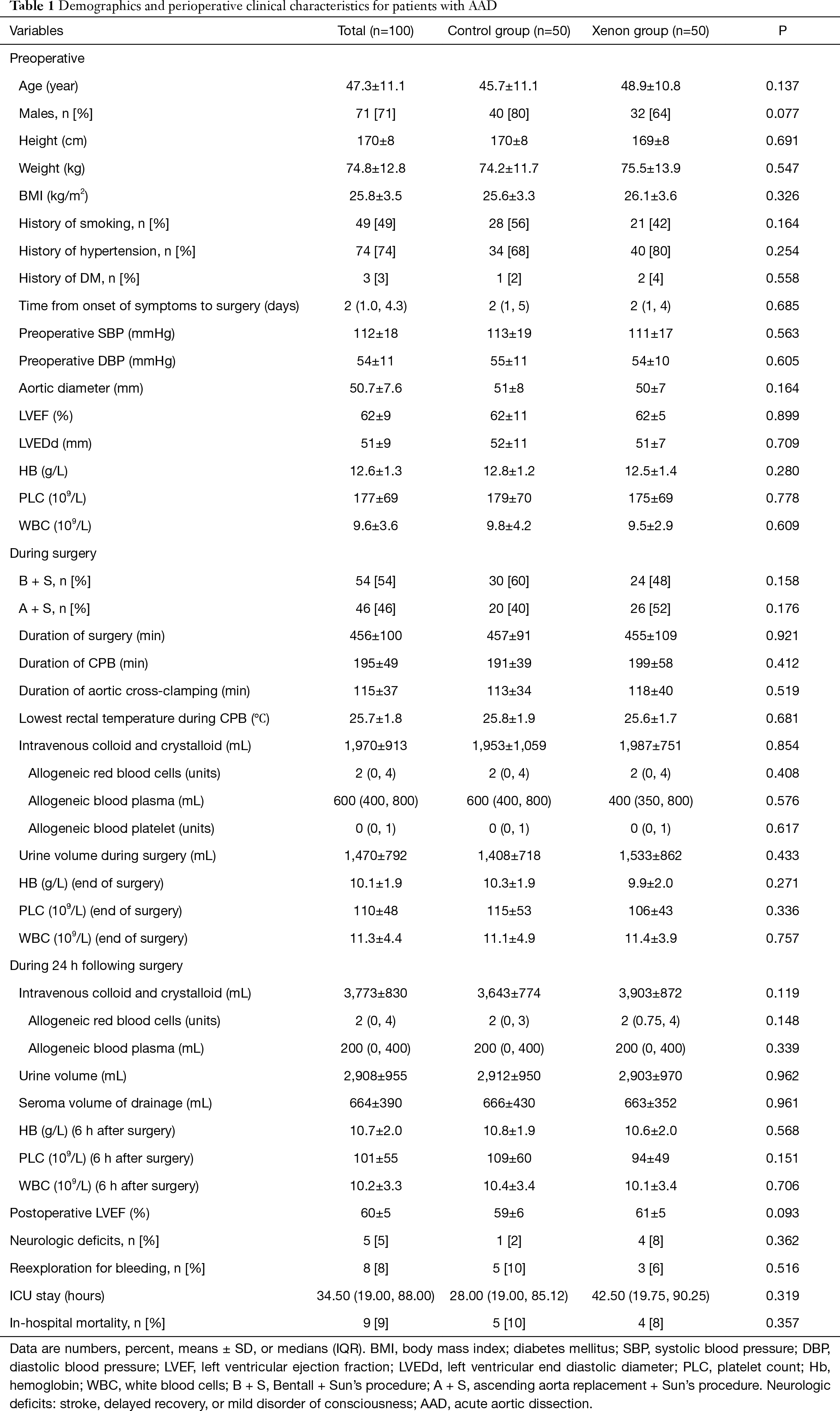 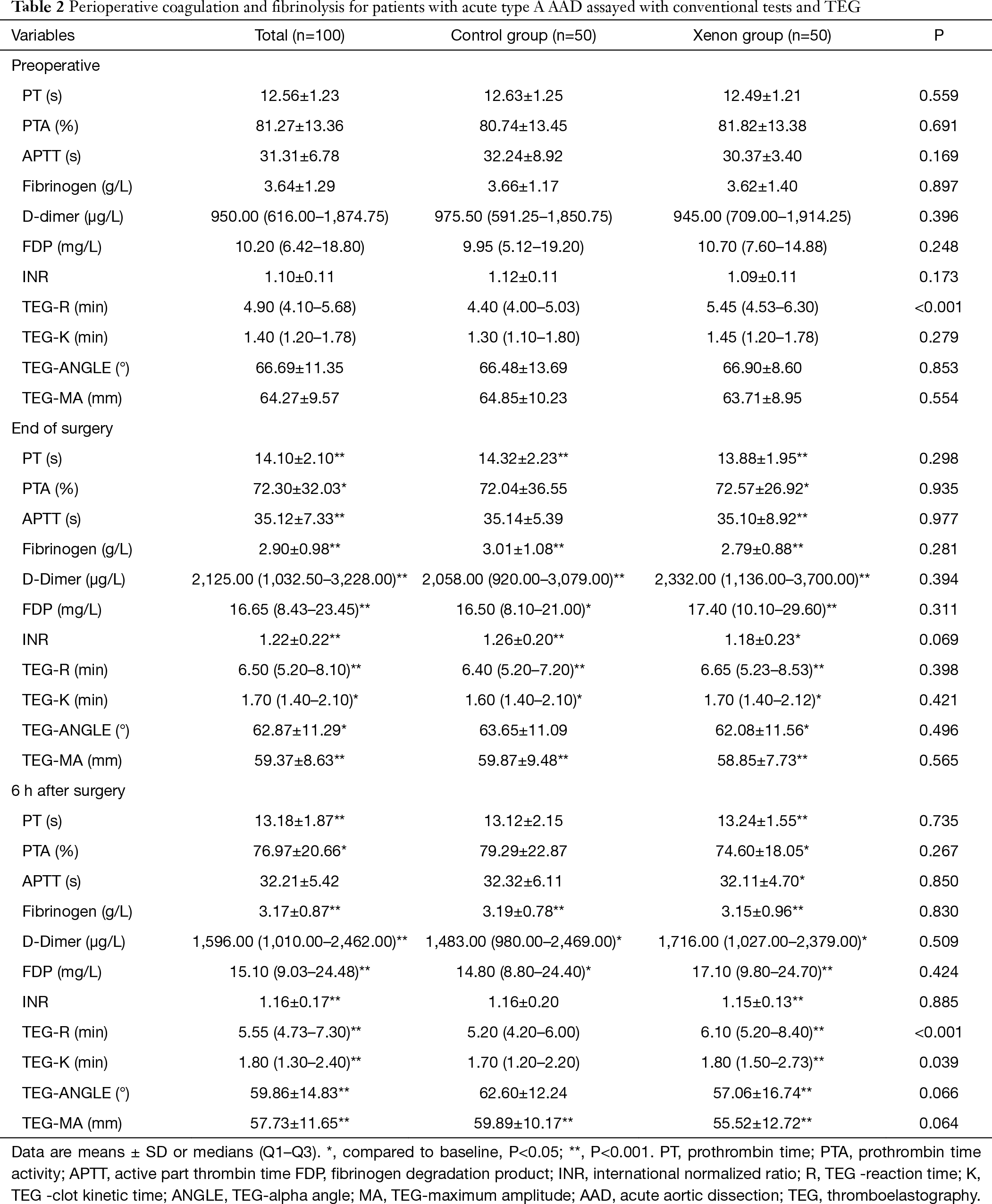 Perioperative coagulation and fibrinolysis for patients with AAD was accompanied with TF depression and decreased tPA at end of surgery and 6 hours later. These data appear in Table 3. Figure 1 depicts TF changes from preoperative to postoperative 6 hours time points and xenon had a significant effect on TF. From preoperative to end of surgery and from preoperative to postoperative 6 hours, the mean level of TF decreased significantly in control group (β −2.61, P<0.001 and β −2.83, P<0.001, respectively), but was maintained relatively stable in xenon group (β −0.5, P<0.001 and β −0.96, P<0.001, respectively). 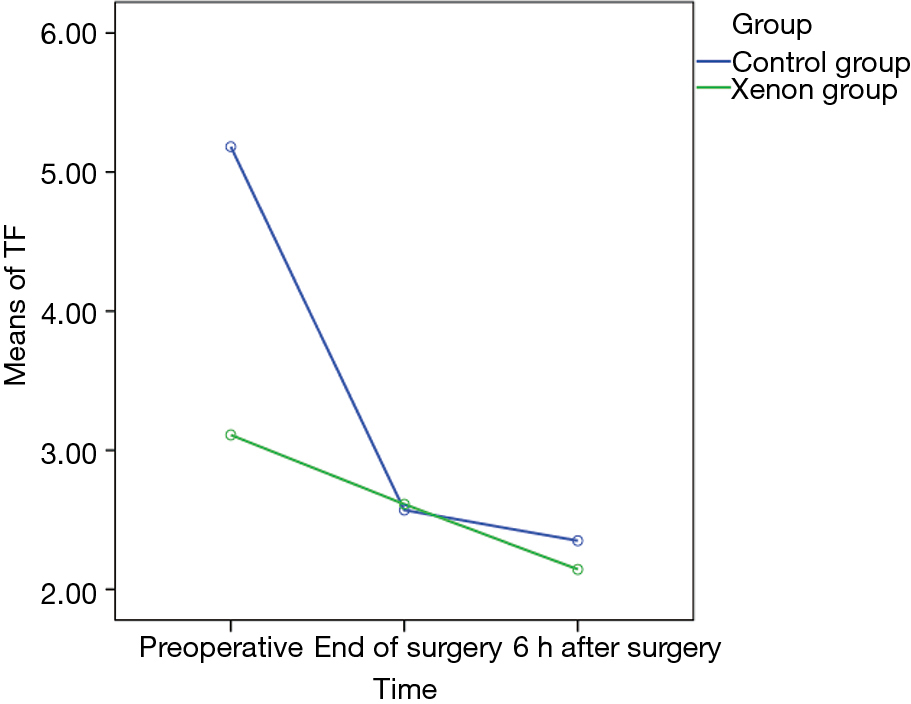 In present study, we noted an inhibition of anticoagulation and activation of fibrinolysis during the perioperative period for AAD patients. A few other reports have focused their attention to this topic (3-5,21), but none of them described the state of AAD patients using TEG and conventional hemostatic tests before and immediately after the emergent operation. In fact, AAD itself is associated with a high risk for coagulation disorders before surgery. In our study, preoperative values of TEG and conventional hemostatic tests showed a certain level of coagulation disorders. After surgery, there existed the consumption of clotting factors as well as the further activation of coagulation and fibrinolysis system, which was accompanied with TF depression and decreased tPA at end of surgery and 6 hours later. Thus, at the end of surgery, coagulation disorders tended to worsen with course of surgery.

AAD is characterized by the rapid development of an intimal flap separating the true and false lumen (16), blood flow through the nonendothelialized false lumen, tissue damage, and turbulence, which are all triggers for coagulation activation (22). During surgery, CPB-induced coagulopathy, platelet activation and dysfunction and promoted coagulation factor consumption and excessive fibrinolysis, increasing postoperative blood loss and blood product transfusion. After surgery, deterioration of coagulation function and active fibrinolysis was confirmed by conventional tests and TEG analysis. We noted that TF was lower at the end of surgery and 6 hours post-surgery, tPA was also diminished 6 hours after surgery, and D-dimer and FDP was evaluated at the end of surgery in AAD patients. Thus, coagulopathy and excessive fibrinolysis is associated with postoperative bleeding in AAD patients.

Xenon anesthesia is associated with more stable intraoperative blood pressure, lower heart rate, faster emergence and faster recovery from anesthesia than volatile and propofol anesthesia (8,9). Previous studies document that xenon did not affect platelet function in vitro but inhibited tPA (12-14). In vitro (13), whole blood was collected from healthy volunteers and was incubated with 65% xenon did not alter unstimulated or agonist-induced platelet glycoprotein expression or platelet-related hemostasis function. In vivo (14), 20 healthy pigs underwent xenon monoanaesthesia (65 vol%), and xenon monoanaesthesia did not alter significantly any coagulation parameter. While xenon is an inhibitor of tPA activator in a rat model of thromboembolic stroke (12). In our study, pulmonary static inflation with 50% xenon during CPB halted decreases in TF and also inhibited tPA at the end of surgery, which may attenuate increase in TEG-R after surgery for patients undergoing AAD repair.

Although the above-described changes were statistically significant, none of the clinical parameters such as blood transfusion or duration of surgery were significant between groups. Such condition might due to correct coagulopathy after normalizing TEG with fresh frozen plasma, platelets and hemostatics (tranexamic acid, lyophilized human fibrinogen and lyophilized human prothrombin complex concentrate).

First, our study was limited by being non-randomized, so the data are biased. Thus, there were differences in the patient groups with respect to the levels of TF in the treatment over control group at baseline. However, such differences in baseline did not affect the trends of perioperative level of TF. Second, xenon was given the period of CPB, which was short, and any potential advantages of xenon with respect to blood coagulation and fibrinolysis may have been masked during surgery or with post-operative interventions. Third, the xenon was applied statically to the lungs during CPB in which blood flow is specifically diverted from the pulmonary circulation, and we could not explain how xenon diffuse into the systemic circulation to affect tPA/TF. Previously report that might partly account for xenon effect on tPA/TF by triggering anti-inflammatory responses and suppressing proinflammatory and oxidative effects (11). Finally, Stanford type A AAD demonstrated the similar volume of aortic dissection, however we were not able to obtain highly detailed information to evaluate the volume of false lumen and thrombogenesis which significantly affected coagulation results.

We thank Accdon (www.accdon.com) for linguistic assistance during the preparation of this manuscript.

Ethical Statement: The study was approved by the Beijing Anzhen Hospital Clinical Research Ethics Committee (identifier: 2013027) and written informed consent was obtained from all patients.