Periostin, an extracellular matrix protein, has been identified as a novel biomarker of idiopathic interstitial pneumonia. Periostin is a mediator of chronic allergic diseases, and is involved in tissue remodeling observed in allergic inflammation in bronchial asthma, scleroderma, and atopic dermatitis (1). Periostin is highly expressed in idiopathic pulmonary fibrosis (IPF), and increased serum periostin correlates with the prognosis of IPF (2). Acute exacerbation (AE) of IPF (AE-IPF) is a life-threating event, and the prognosis of IPF is considerably dependent on the occurrence of AE (3). However, the association between periostin and AE-IPF has not been investigated. Herein, we have reported our findings in an autopsied patient with an AE of familial IPF (AE-FIPF) and revealed significant expression of periostin in the affected areas of the lungs. This is the first case report describing expression of periostin in AE-IPF.

In 201X, a 72-year-old woman was diagnosed with FIPF at a hospital; an older sister and younger brother had died due to similar disease conditions. There was no history of smoking. Pulmonary fibrosis slowly progressed over 5 years (Figure 1A,B). At 77 years of age, the patient was admitted to the same hospital for increased dyspnea of 1-month duration, and the patient was then referred to our hospital for intensive treatment. 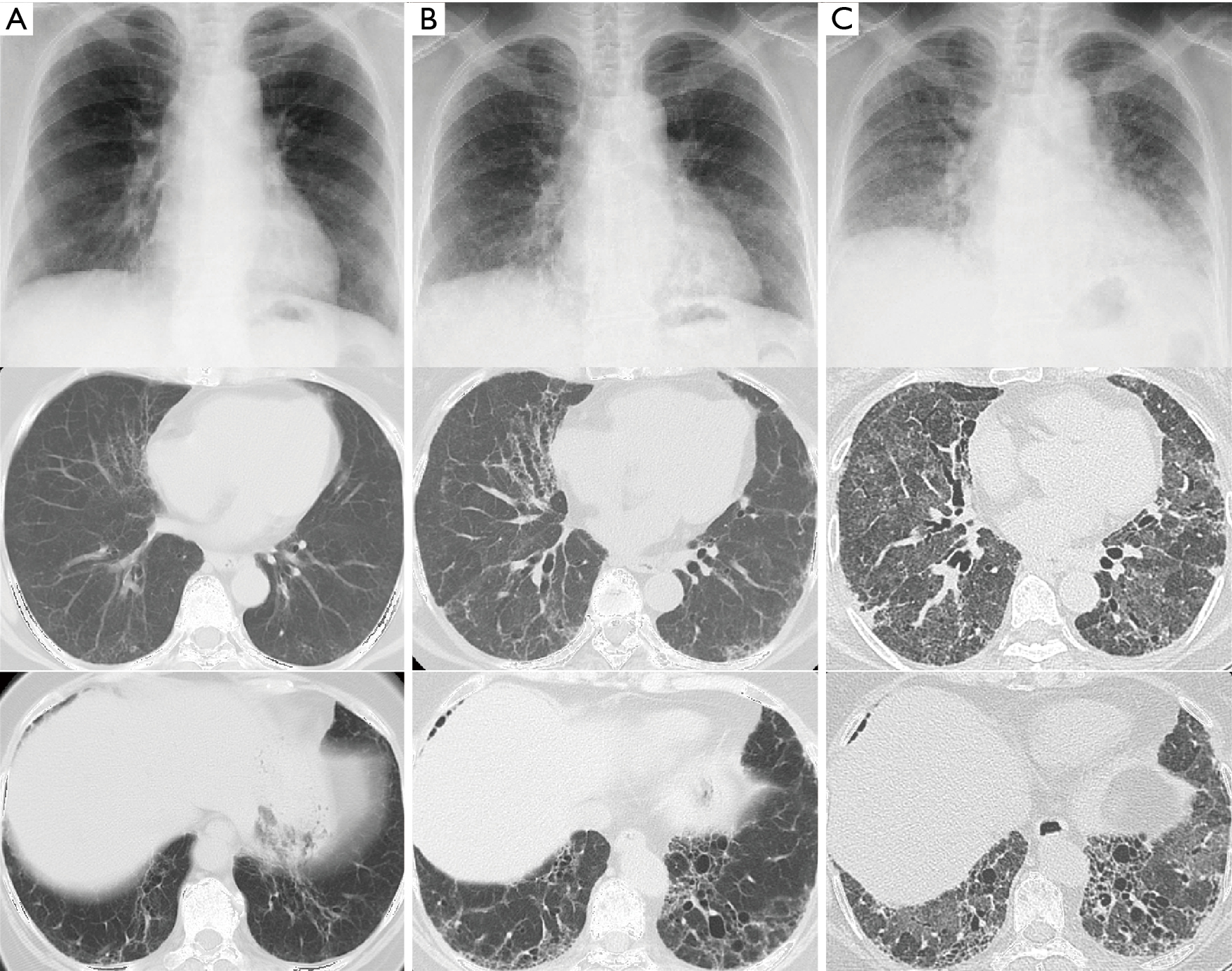 Figure 1 Chest radiographs and computed tomography images showed symmetrical reticular and ground glass opacities. The radiological features progressed slowly over 5 years from the age of 72 years (A: 72 years; B: 77 years), but then rapidly deteriorated over a month (B: 54 days and C: 25 days prior to death, respectively).

Autopsy was performed at 2 hours postmortem. At autopsy, the lungs weighted 370 g (left) and 420 g (right), respectively. Histological examination revealed a diffuse alveolar damage consistent with AE-IPF and a pattern of nonspecific interstitial pneumonia. Bacterial pneumonia was observed in the right upper lobe, and cytomegalovirus infection was identified in the esophageal and gastric mucosa, but not in the lungs. There was no evidence of granulomatous changes or polyangiitis indicating antineutrophil cytoplasmic antibody (ANCA)-associated vasculitis. To investigate the mechanism of AE-IPF, we performed immunohistochemical analysis using rat anti-human periostin monoclonal antibodies (clone no. SS19C). The antibodies were incubated with sections overnight at 4 °C. After washing with phosphate buffered saline, antigens were detected using an EnVisionTM horseradish peroxidase (3,3'‐diaminobenzidine) system (Dako, Glostrup, Denmark) as described previously (4). Interestingly, immunohistochemical analysis showed accumulation of periostin in the fibrotic lesion of the lung parenchyma, which was greater than the periostin accumulation in control and asthmatic lung samples obtained from video-assisted thoracic surgery for early lung cancer (Figure 2). As shown in Figure 3, when comparing periostin accumulation among the acute, sub-acute, and chronic inflammatory/fibrotic phases in this case, periostin markedly accumulated in sub-acute fibrotic lesions developing in interstitial tissue with proliferation of fibroblasts, which was estimated approximately 7–10 days after acute exacerbation. Less accumulation of periostin was observed in the acute inflammatory phase with neutrophil invasion. The extent of periostin accumulation in the sub-acute fibrotic phase was stronger than that in the chronic phase of fibrosis with bronchiolar metaplasia and smooth muscle proliferation. 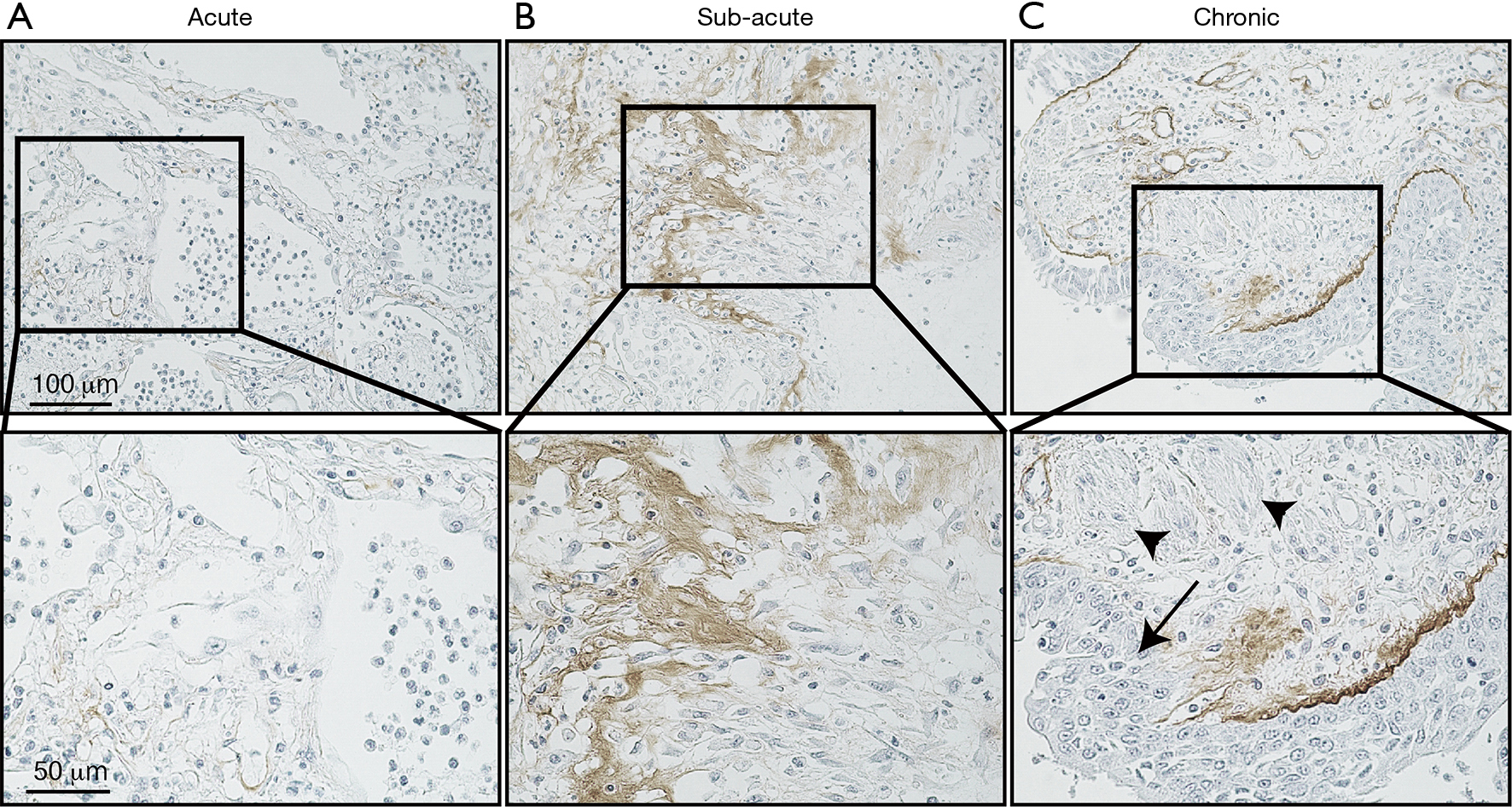 Unlike in sporadic IPF, the typical honeycomb lung is not always observed in FIPF (5). FIPF and sporadic IPF are similar in various aspects such as results of pulmonary function test, pathologic changes, radiographic features, survival data, and treatment (6). A clinical biomarker for predicting prognosis in patients with AE-FIPF and sporadic IPF would be useful in the management of these diseases and in the treatment with anti-fibrotic agents.

Periostin combines with other extracellular matrix proteins to promote the formation of collagen fibers. It is associated with fibrotic diseases such as bronchial asthma, scleroderma, and atopic dermatitis (1,7). Periostin is highly expressed in lungs of patients with IPF, but is not expressed in patients with nonspecific interstitial pneumonia. Serum periostin levels are significantly elevated in patients with IPF when compared to healthy individuals (8). Recently, Ohta et al. reported that increased serum periostin is correlated with the prognosis of IPF (2). We measured the serum periostin level on admission and evaluated the expression of periostin in the lung obtained at autopsy by immunohistochemistry. In this case, periostin was highly expressed in lungs on autopsy, especially in the fibrotic interstitium and bronchiolar epithelium, while it was not expressed in the healthy lung tissue. On comparison of accumulation of periostin in the inflammatory/fibrotic acute, sub-acute, and chronic phases, accumulation of periostin was strong in the stroma tissue, consists of extracellular matrix. In this case, periostin may have accumulated in the fibrotic lesion in the sub-acute phase after AE-IPF.

Serum periostin levels were not clinically useful for predicting the prognosis of AE-FIPF in our case. SS18A × 17B periostin antibodies recognize inflammatory periostin produced in asthma and atopic dermatitis, while SS20A × 19D periostin antibodies specifically recognize fibrotic periostin produced by fibroblasts (2). While serum periostin may be a biomarker of IPF, it was not elevated in the patient with AE of IPF in this study. We speculated that serum periostin might be elevated at later phase of AE-IPF with increase in pulmonary accumulation. There may be a time lag between the production of periostin in the fibroblasts and its detection in blood circulation. Serum periostin may not be a sensitive biomarker for short-term changes in AE-IPF. However, it remains unclear if serum periostin level was elevated in the later phase of AE-IPF since it was not monitored during hospitalization in this case.

In summary, while serum periostin was not elevated on admission, accumulation of periostin was identified in the lungs at autopsy. Periostin might be related to the development of AE as well as chronic fibrosis. However, additional cases of FIPF or AE-IPF are required to elucidate the relationship of periostin with AE-IPF.

Informed Consent: We were careful to not to identify the patient and other relevant family members when preparing the manuscript. We obtained written informed consent in Japanese from the spouse of the patient for publication.