Esophagus cancer (EC) is the eighth most common cancer worldwide and the sixth leading cause of cancer death (1,2). Esophageal adenocarcinoma (EAC) predominates in western countries, while esophageal squamous cell carcinoma (ESCC) is the most common histological type in Asian countries. Surgical management is still considered as the mainstay of treatment for all resectable cases. However, surgery alone (S alone) showed poor long-term outcomes, and the 5-year survival rate was rarely >30% even after curative resection (3,4). Neoadjuvant chemoradiation followed by surgery has been a standard treatment in western countries (5-8). However, many Asian patients still choose surgery as their initial therapy, especially in China.

Postoperative radiotherapy (PORT) is not recommended by the current National Comprehensive Cancer Network (NCCN) guidelines for patients who underwent radical resection (9). However, many patients developed local recurrence or distant metastasis (10). A number of studies have investigated whether PORT leads to improved cure rates compared with S alone, but individual reports have been conflicting (11-29). A meta-analysis of five randomized controlled trials (RCTs) performed by Malthaner et al. found no benefit from PORT in patients with ESCC (30). However, all included RCTs were designed more than 20 years ago, employed a conventional two-dimensional radiotherapy (2D-RT) technique, three of them were small with fewer than 50 patients in the treatment group, and two of them included data of palliative resection. Since this meta-analysis, data from one recently published RCT (11) and some retrospective studies including several large retrospective studies (17-25) have demonstrated a potential benefit from PORT in patients with resectable ESCC. Therefore, it is necessary to reevaluate the value of PORT for ESCC. In the present study, we performed a systematic review and meta-analysis of currently available evidences to further determine whether PORT improves survival compared with S alone in radically resected ESCC.

This meta-analysis was conducted in accordance to the Preferred Reporting Items for Systematic Reviews and Meta-analysis (PRISMA) criteria (31).

Studies were included if they met the following criteria: (I) types of studies. RCT, or prospective or retrospective cohort study; (II) types of participants. Participants with a histopathological diagnosis of ESCC and resectable disease; (III) types of interventions. Patients with surgery as their initial treatment and compared patients who received radical resection with or without PORT; (IV) outcome: reported survival [overall survival (OS) and/or disease-free survival (DFS)] data. If multiple articles covered the same study population, the study with the most recent and complete survival data was used. Studies were excluded if any of the following criteria were applied: (I) letters, editorials, case reports, and reviews; (II) survival data could not be extracted from the literature.

The data were extracted by two investigators independently, and the consensus was reached in case of any discrepancy for all the data. The following data were extracted from each study: first author, years of publication, duration of the study, country of origin, numbers of patients (with and without PORT), study design, time-to-event data (OS, DFS), locoregional recurrence and distant hematogenous metastases data, and occurrence of grade 3–4 adverse events. In case that studies did not report sufficient data, authors of those studies were contacted for further information by Email if possible.

The Newcastle-Ottawa Quality Assessment Scale (NOS) was used to assess the quality of retrospective studies (32). The NOS comprises of three items: patient selection, comparability of the study groups, and assessment of outcomes. The quality of each cohort study was scored on a scale ranging from 0 to 9 by two independent researchers. Six stars or greater was considered to be sufficiently high-quality studies.

Statistical analysis was performed using the software Review Manager 5.3 (Cochrane Collaboration, Oxford, UK) and STATA MP14.0 (Stata Corporation, College station, TX, USA). Because the median survival or survival rates at a specific point in time were not expected to be reliable surrogate measures for the pooled survival analysis, hazard ratios (HRs) and their 95% CIs were used as summary statistics for OS in the present meta-analysis. Crude HRs with 95% CIs were either extracted directly from the original reports or calculated by the Kaplan-Meier curves based on the methods of Parmar et al. (34) and Tierney et al. (35). A statistical test for heterogeneity was performed by the Chi-square (χ2) and I-square (I2) test with significance set at P<0.10 and/or I2>50%. If significant heterogeneity existed, a random-effects analysis model was used; otherwise, a fixed-effects model was used. In addition, we conducted subgroup and meta-regression analysis to search for the source of heterogeneity. The stability of the pooled results was evaluated by a sensitivity analysis in which the data of an individual study was removed each time. The funnel plot, Begg’s test (36), and the Egger’s linear regression test (37) were performed to investigate any potential publication bias. If evidence of publication bias was observed, the trim and fill method (38) was applied to correct the bias. A P value <0.05 was considered to be statistically significant.

The literature search and study selection procedures are shown in Figure 1. The initial search from the electronic database retrieved 1,766 articles. After removing the duplicates, 1,049 citations were identified. Of these, 995 were excluded through an abstract review. The remaining 54 articles were screened through a full-text review for further eligibility. Because two Taiwan Cancer Registry-based articles, two articles of Xiao et al., and three articles of Chen et al. covered the same study population, four of them were excluded, and three articles (12,14,25) with the most recent and complete survival data were retained. Finally, 6 RCTs and 13 retrospective studies assessing 8,198 patients (2,779 patients receiving PORT and 5,419 patients receiving S alone) were included in the meta-analysis. For six included RCTs, five of them (12-16) were the same with that enrolled in the previous meta-analysis performed by Malthaner et al. (30), and the remaining one was new eligible (11). Two RCTs (11,15) included data of palliative resection and radical resection, but only data of radical resection were extracted. Characteristics of the eligible studies were summarized in Table 1. 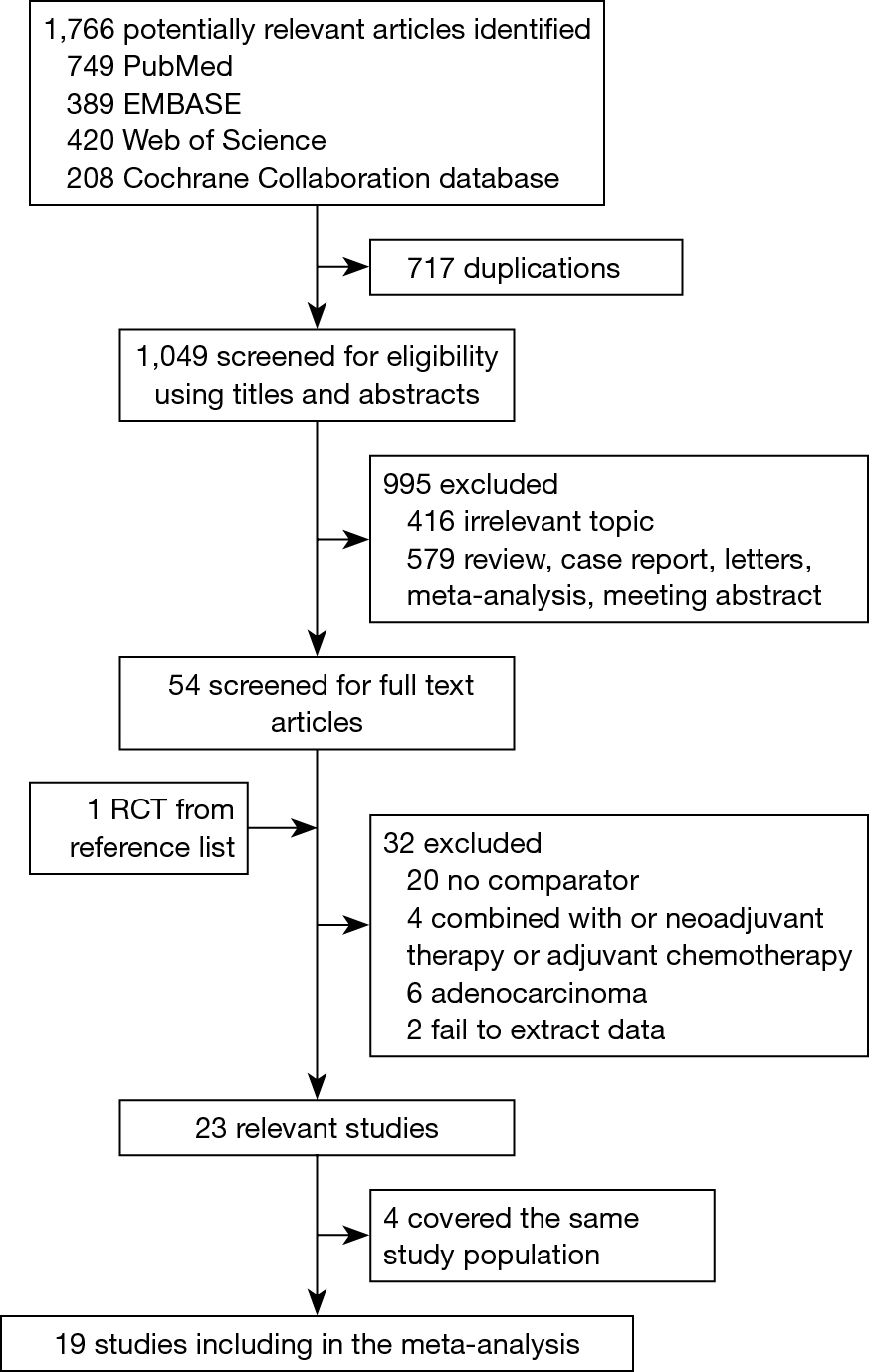 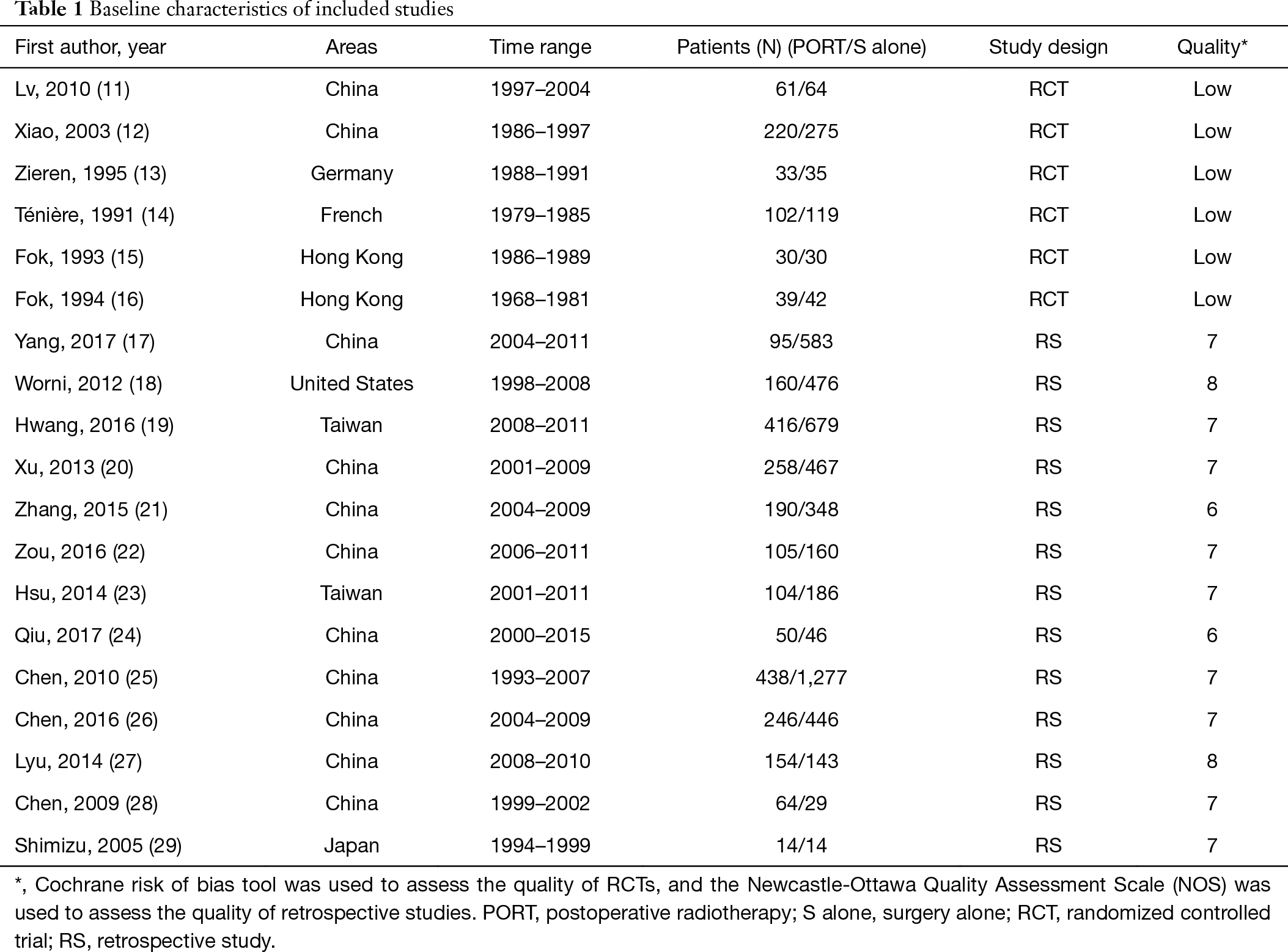 The two researchers showed good consistency in assessing the study quality of nineteen included studies (Table 1). All of the retrospective studies demonstrated a score of ≥6 (Table S1). The qualities of the included RCTs were generally low. One RCT were considered to be in “high risk”, and the remaining RCTs were classified as “unclear” with respect to the risk of bias (Figure S1). 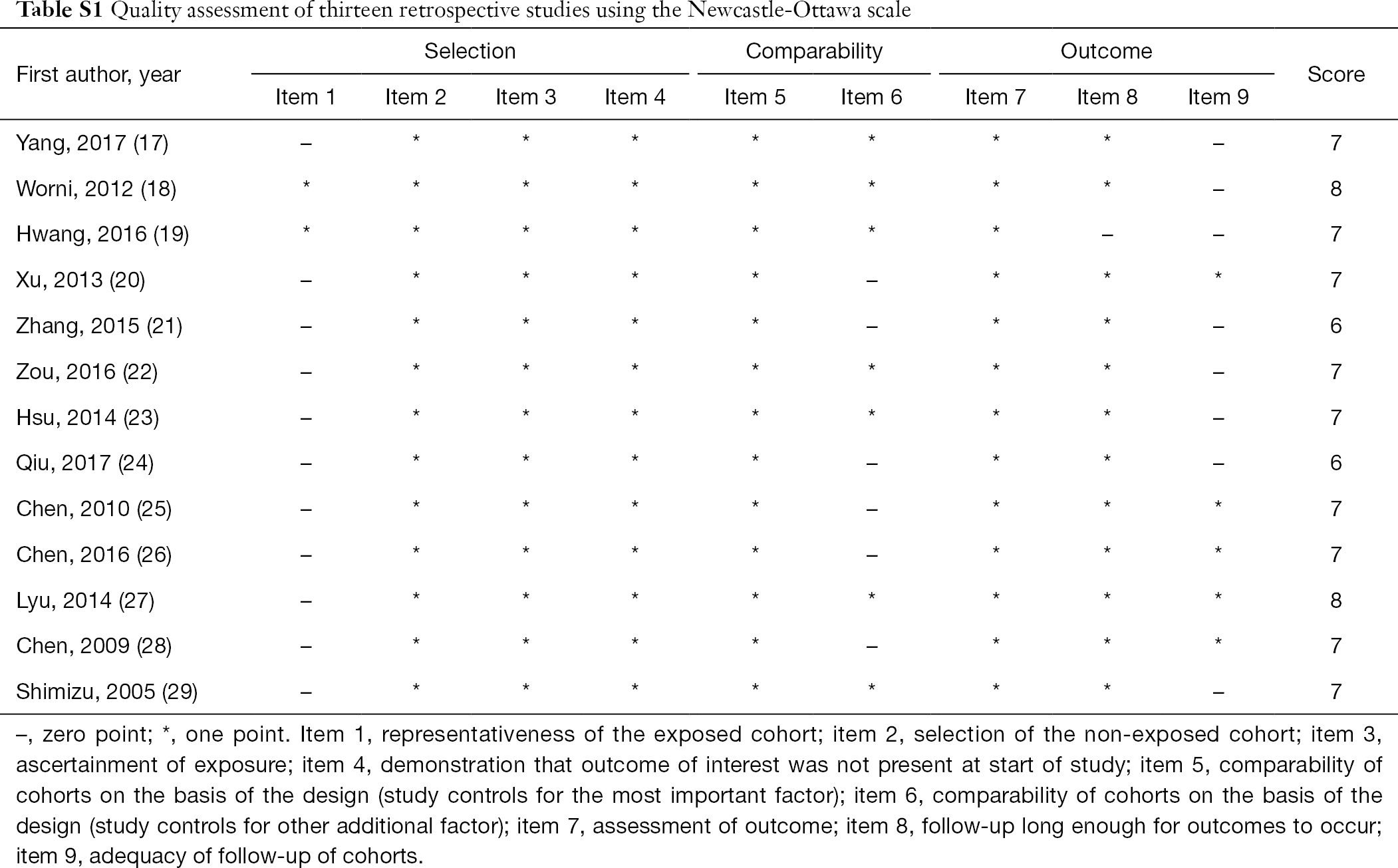 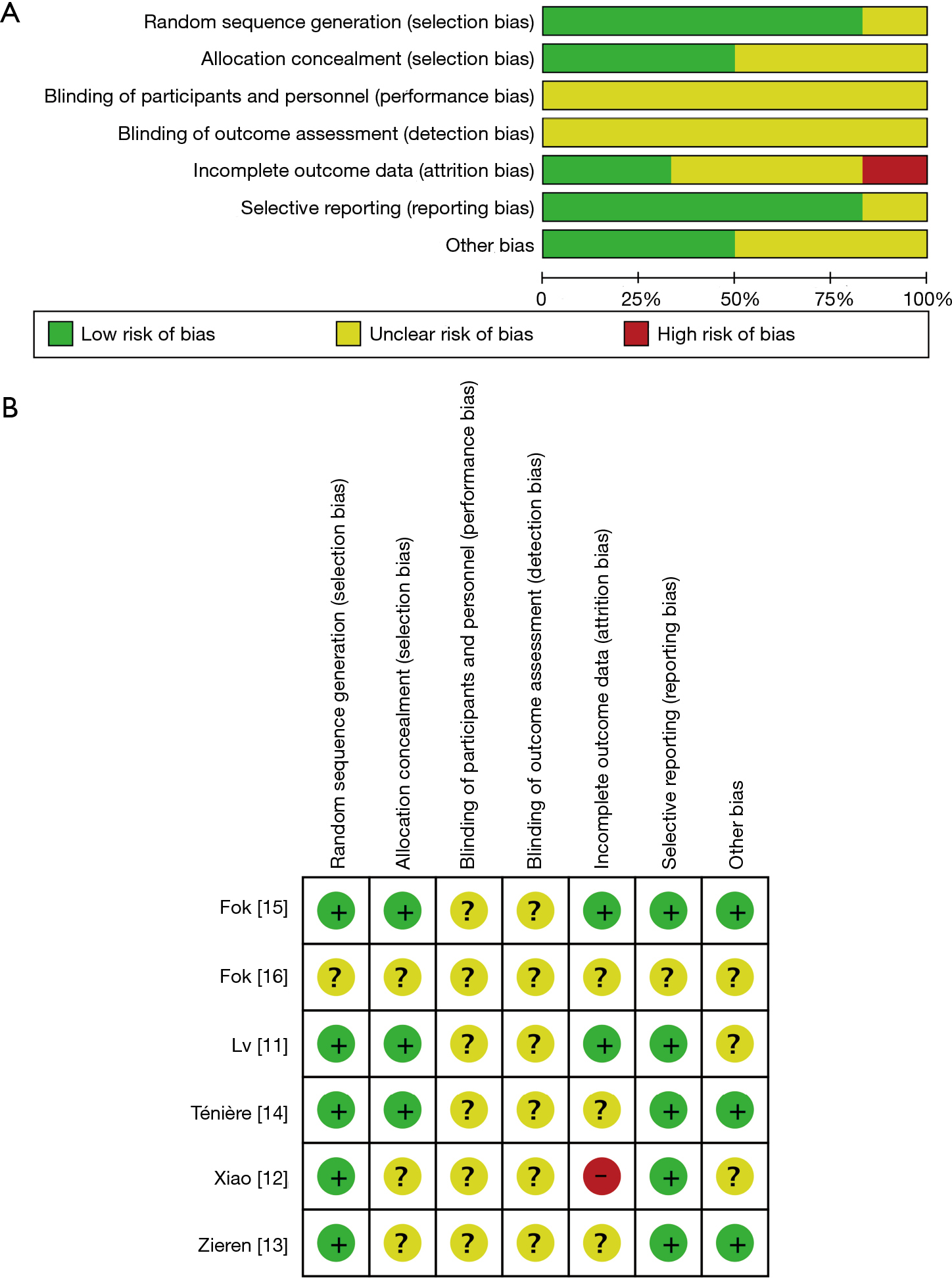 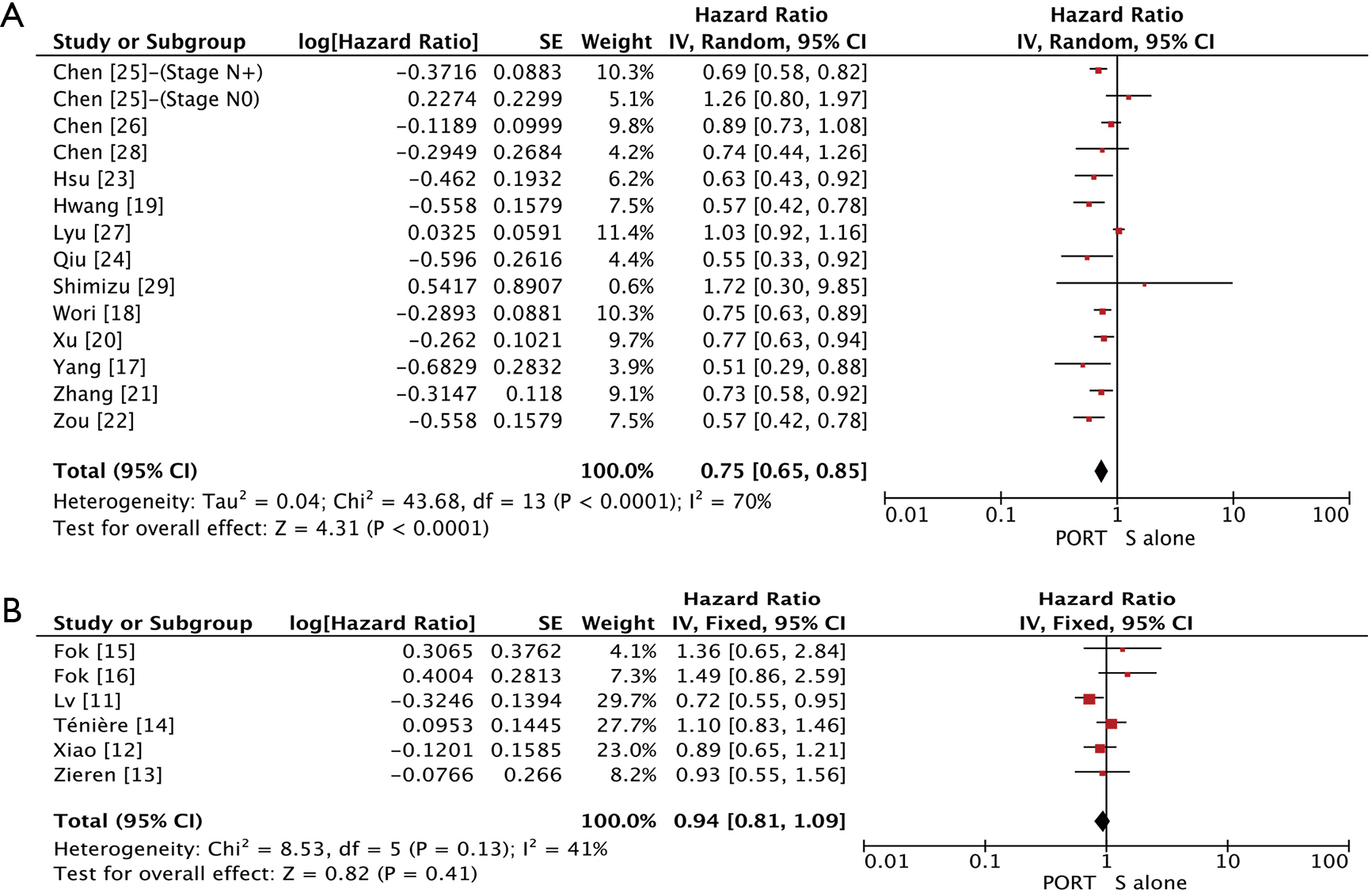 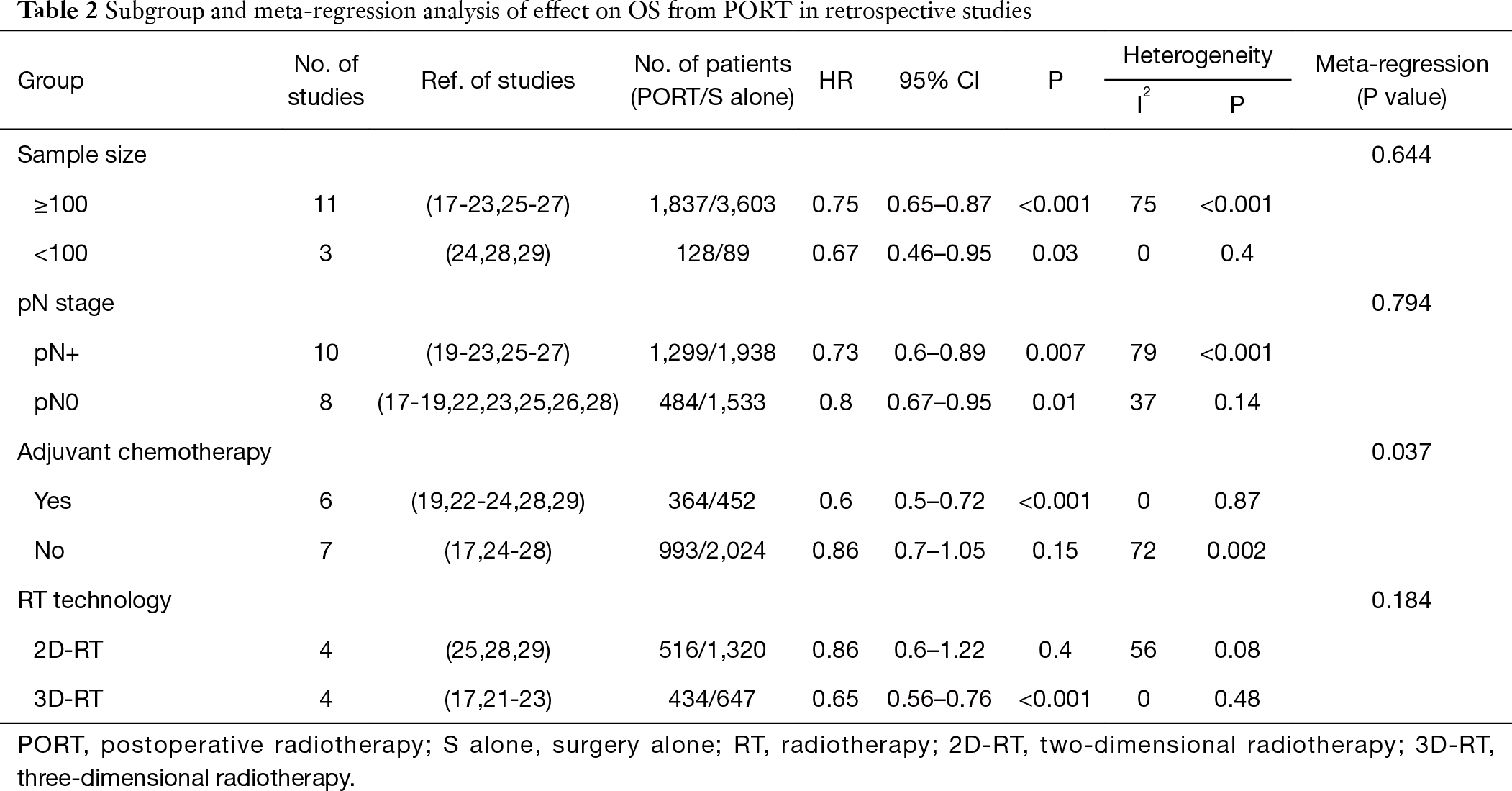 Sensitivity analyses were carried out to assess whether individual studies influenced the results in retrospective studies and RCTs, respectively. When individual studies were removed one at a time from the analyses for OS, the corresponding pooled HRs were not markedly altered by any single study (HR lies between 0.72 and 0.76 in retrospective studies and between 0.92 and 1.1 in RCTs), confirming the stability of the presented results (Figure S2). 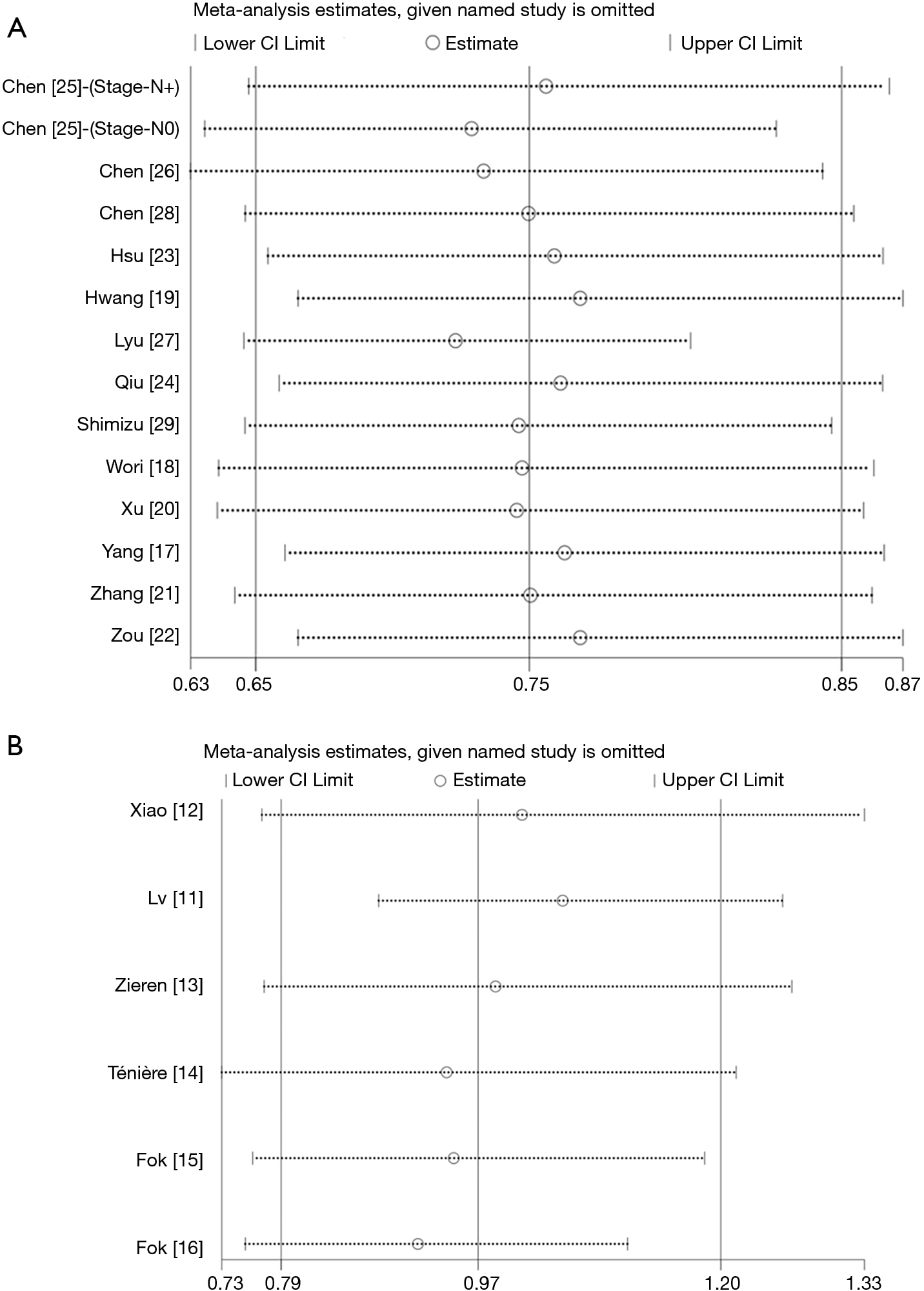 Figure S2 Sensitivity analysis for the comparison of OS between PORT and S alone. (A) In retrospective studies; (B) in RCTs. OS, overall survival; PORT, postoperative radiotherapy.

Publication bias in terms of OS was assessed in retrospective studies, but not done in RCTs due to the lack of number of studies. The funnel plot is shown in Figure S4. Although the Begg’s test results indicated no publication bias (P=0.511), Egger’s test suggested a borderline significant probability of publications bias (P=0.084). However, the trim and fill method demonstrated that no missing studies were detected, indicating that our results were reliable. 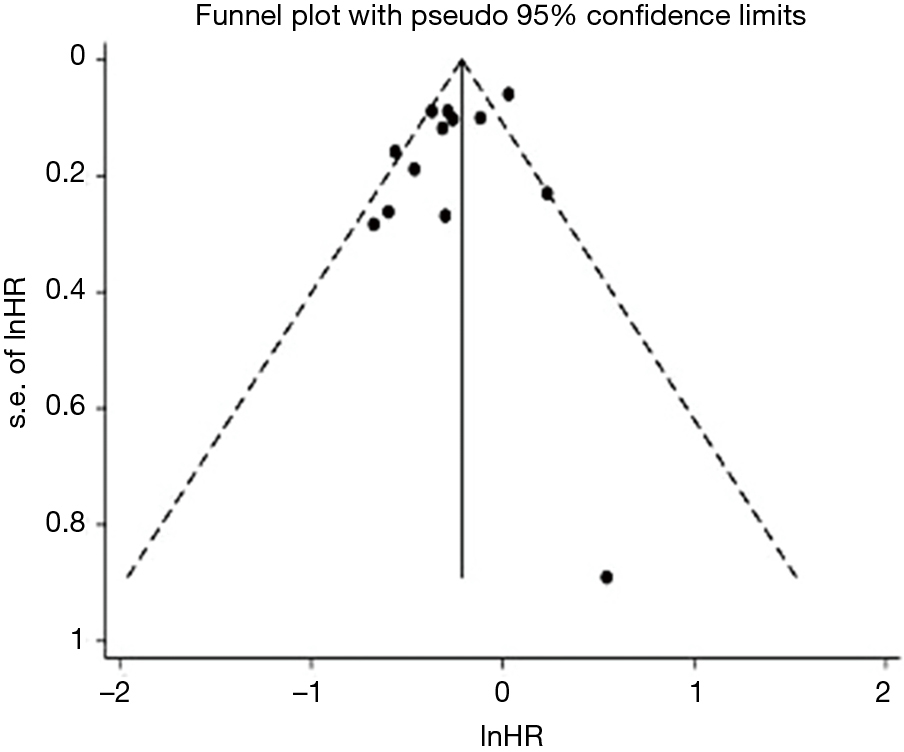 Neoadjuvant chemoradiotherapy (CRT) remains to be the standard treatment modality for locally advanced EC based on the results of the CROSS trial (7). The CROSS study demonstrated a 14% increase in 5-year OS for patients with EC (both squamous cell carcinoma and adenocarcinoma) treated with neoadjuvant CRT compared with surgery alone (7). In the latest network meta-analysis conducted by Montagnani et al., 25 trials were included, neoadjuvant CRT was associated with the most robust survival advantage across different multimodality treatment options, but adjuvant CRT was associated with a non-significant benefit (39). However, we have to be confronted with is that the initial treatment for majority of patients’ trends to be surgery in China for various reasons. Although postoperative multidisciplinary treatment including RT and CRT has been vigorously implemented, there are no current practical guidelines suggesting postoperative treatments, possibly due to the absence of a large randomized trial or a high-quality meta-analysis demonstrating its survival benefits.

There may be several possible explanations why RCTs failed to show OS benefit with the use of PORT. Firstly, 2D-RT technique was used in all included RCTs. Compared with 2D-RT technique, 3D-RT delivered a high dose to the tumor target volume while potentially minimizing the radiation dose to the organ at risk. Most of individual studies of PORT using 3D-RT showed consistent OS benefit compared to S alone (17,21-23), while the results of studies using 2D-RT were various. In current meta-analysis, PORT significantly improved OS for PORT using 3D-RT, but not for that using 2D-RT when compared to S alone. Secondly, adjuvant chemotherapy was not used in combination with PORT in most of included RCTs (12-16). Only one included RCT (11) used PORT with chemotherapy and showed significant improved OS. OS benefit from PORT with adjuvant chemotherapy was also reported in several retrospective studies (19,22,23). A meta-analysis comparing surgery followed by adjuvant CRT to surgery without adjuvant CRT (non-CRT) for resectable esophageal carcinoma concluded that CRT could gain a survival benefit (40). In the present analysis, PORT showed significant improvement of OS compared with S alone in subgroup of PORT with chemotherapy, but not in subgroup of PORT alone which accounted for the most of heterogeneity of the treatment effect on OS. Thirdly, data from included RCTs were of low quality, and the sample size of them were small (three of them were with fewer than 50 patients in PORT group). Thus, it might be underpowered to detect the difference in OS.

There are several limitations in our meta-analysis. Firstly, all of included RCTs were of low quality which might be underpowered to detect the difference in OS. Secondly, significant heterogeneity was seen in pooled-analysis of OS (I2=70%) in retrospective studies. By using subgroup and meta-regression analysis, PORT with/without chemotherapy was identified as evident contributor of heterogeneity. Thirdly, a few HRs were not directly reported in the texts, and hence calculated from the Kaplan-Meier curve. This may result in bias and error. Fourthly, several individual studies did not report resection status, and a part of patients with R1 resection should be contained which might be a confounding factor. However, subgroup analysis of R0 resection showed a survival benefit from PORT (HR =0.73, 95% CI: 0.66–0.8). Finally, majority of included studies were performed in China, thus, extending the conclusions to other regions should be discreet. Other confounding factors may also affect the survival, such as radiation doses, tumor location, pathological grade, and operation type. However, we could not conduct a subgroup analysis of that due to lack of detailed data or number of studies.

The present study shows that PORT can improve DFS and decrease risk of locoregional recurrence in patients with radically resected ESCC, and PORT using 3D-RT or in combination with chemotherapy is likely to be more useful. Further well-designed, prospective studies are needed to confirm the effect of PORT on OS.

Ethical Statement: The study did not involve any experiment on humans or animals, thus ethical approval was not necessary.