Clinicopathological features of lung cancer in patients with rheumatoid arthritis

Rheumatoid arthritis (RA) is a systemic inflammatory disease that predominately affects articular and related structures. The prevalence of RA in the general population ranges from 0.5% to 2% (1). Approximately 40% of patients with RA have some types of extra-articular manifestations, including myocarditis, pneumonitis, serositis, valvulitis, myositis, arteritis, peripheral neuritis, and hematological changes (2). The lung is a frequent site of extra-articular involvement. RA could affect the pulmonary parenchyma, airways, pleura, and vasculature. A growing body of evidence has suggested an elevated risk of lung cancer (LC) in the RA population (3-5). However, existing literature regarding RA associated LC have been hampered by the limited sample size, lack of a control group of general LC patients, and absence of information about genetic mutation status and anti-cancer treatment outcomes. We therefore performed a retrospective cohort study to identify the potential clinicopathologic differences of LC in RA patients and in patients without systemic connective tissue disorder (CTD). Furthermore, as smoking is a shared risk for both LC and RA, we compared the clinicopathologic characteristics of LC patients with RA according to their smoking status, aiming to explore the role of smoking in RA associated LC.

Chest radiological examinations were reviewed retrospectively by an independent reading of two chest radiologists in the absence of clinical information. The tumor located within 2 cm of the proximal bronchial tree, trachea, esophagus, major vessels, heart, pericardium, and other mediastinal structures is defined as the central lesion, while the one located larger than 2 cm of the aforementioned mediastinal structures is defined as the peripheral lesion. The peripherally located tumors were further grouped based on the lobe involved.

The current study was conducted in accordance with the guidelines of the Declaration of Helsinki and the ethical guidelines for epidemiological research and approved by the Institutional Review Board of Peking Union Medical Hospital (No. S-K253).

Comparisons between the LC patients with RA and those without CTD 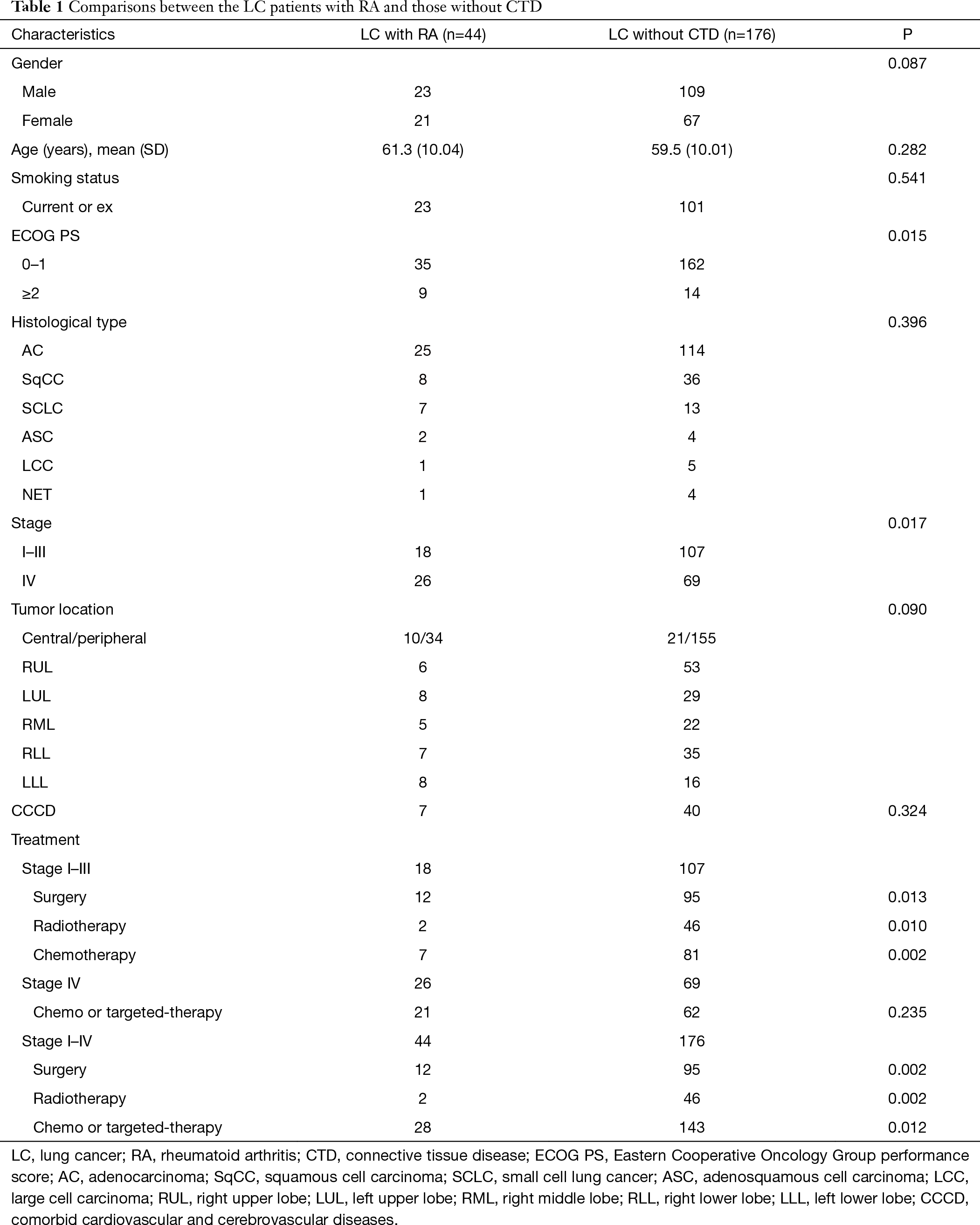 As to RA disease activity, most patients are in remission. Only two patients showed low disease activity according to the values based upon CDAI, which did not affect the ECOG PS. Specific CT patterns of RA-interstitial lung disease (RA-ILD) were identified in 18 patients (40.9%), including usual interstitial pneumonia (UIP) pattern in 13 patients and non-specific interstitial pneumonia (NSIP) pattern in 5 patients. Results of serologic testing were not available in all LC patients with RA in the study; 31.7% (13/41) of the patients are ANA positive, 92.9% (39/42) RF positive, and 64.3% (27/42) CCP positive. 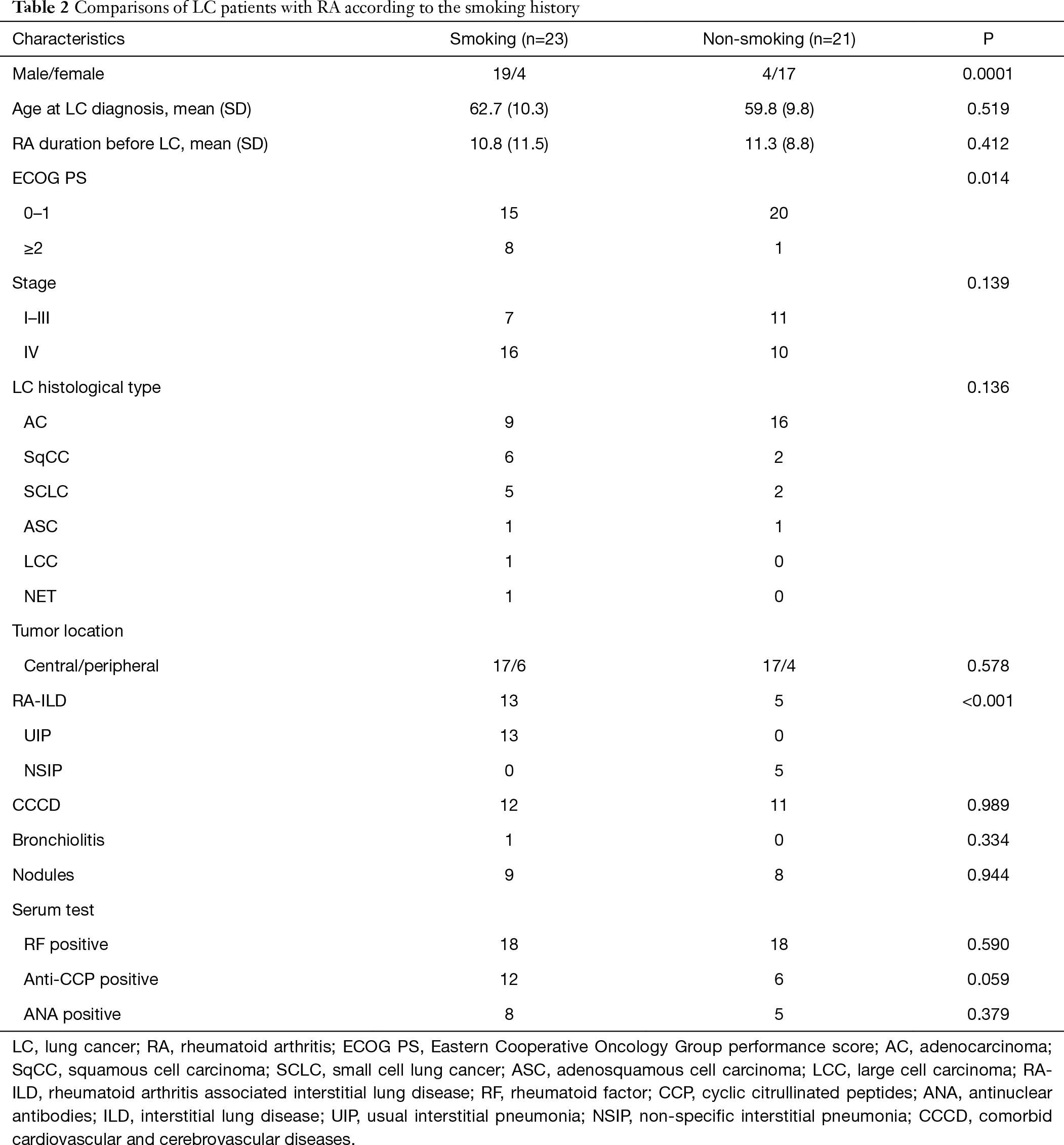 Anti-RA and anti-cancer treatment in LC patients with RA

Of the 44 LC patients with RA, 41 patients (93.2%) had received nonsteroidal anti-inflammatory drugs (NSAIDs); 23 (52.3%) had received glucocorticoids; 36 patients (81.8%) had received at least one disease-modifying anti-rheumatic drug (DMARD), including methotrexate in 29 patients, cyclophosphamide in 13 patients, leflunomide in 11 patients, and hydroxychloroquine in 9 patients. Besides, 23 patients have received Tripterygium glycosides, 27 patients received total glucosides of paeony. The information regarding the treatment history cannot be obtained in three patients.

As reported in the previous epidemiological study (9), male patients predominate in our control group of LC patients without CTD. In contrast, female patients account for nearly half of the cases in the LC with RA group, which might be attributed to the higher incidence of RA in women (10). Notably, only one female patient and 50% of total patients had a smoking history in the LC with RA group. Compared to the previously reported smoking rate in LC patients (11), the lower smoking rate in LC patients with RA suggested that RA itself, independent of tobacco exposure, may be a risk factor for LC. However, inter-group comparisons on gender ratio and smoking rate failed to show statistically significant differences, which is likely due to the limited sample size.

The most common location of LC is the upper lobes in both groups, which is in consistent with the previous epidemiologic study (12). The majority of LC patients with RA had adenocarcinoma, followed by squamous cell carcinoma (SqCC) and small cell carcinoma. A similar histological pattern of LC with CTD had been described in the reported literature, with a predominance of adenocarcinoma, and with few cases of SqCC and small cell carcinoma (13,14). As the underlying chronic inflammatory process in RA may participate in the development of LC, gene mutation profiling of LC in RA patients may be different from that in general population. However, a large proportion of patients in our study are diagnosed before the advent of routine molecular testing of LC, information regarding the EGFR or ALK mutation status was obtained in only 6 cases of adenocarcinoma, with 5 cases negative for both EGFR and ALK mutation, and 1 case positive for EGFR exon 21 L858R point mutation. Saijo et al. (15) reported that EGFR mutation was not observed in the 7 non-squamous NSCLC patients with CTD, whereas 10 out of 17 patients without CTD tested positive for EGFR mutations. Similarly, another study in systemic sclerosis showed that only 1/10 had EGFR mutation (16). However, interpretation of these data is limited by the small number of cases with molecular testing performed, and further comprehensive genomic profiling is warranted.

Unexpectedly, the majority of patients are diagnosed at an advanced stage in LC with RA group. This is at odds with our presumption that LC could be detected at an early stage in patients with RA thanks to a regular follow-up. A proposed explanation for the contradiction is that majority of the cases in our cohort are referred from rural hospitals where inadequate access to quality medical care often leads to a delayed diagnosis. Additionally, a selection bias may exist, given that RA patients with advanced LC are more likely to be referred to our center as RA associated comorbidities and the use of DMARDs greatly complicate the medical treatment for LC. Nonetheless, our findings raise concerns over the negligence of malignant pulmonary lesions in RA patients and highlight the need for increased attention to and efforts for optimization of cancer screening protocols in RA patients.

With regard to the ECOG scoring, a significantly larger proportion of LC patients with RA has an ECOG PS ≥2 compared to those without CTD. The comorbidities related to RA and its treatment, coupled with the more advanced stage of LC at presentation, may provide an explanation for the poorer performance status in LC patient with RA.

ILD has been reported to be the most common pulmonary manifestation in RA patients, occurring in 10–20% of patients (17). In our study, ILD was observed in 40.9% of LC patients with RA. A postulated reason for the higher prevalence of ILD in our study is that respiratory symptoms caused by LC may prompt a diagnostic imaging which could result in a recognition of either early ILD or very mild ILD that would otherwise be asymptotic. Of the 18 cases of RA-ILD in our study, 13 are UIP, while five are NSIP. In consistent, prior studies have also shown that although NSIP is the most common pattern in CTD-associated ILD, UIP is more frequent in RA-ILD (18,19). Notably, all cases with UIP were found in patients with smoking history, while NSIP was noted only in non-smoking patients. This suggested a role for smoking in the pathogenesis of UIP in RA patients. Besides, the presence of UIP was significantly more common in RA-associated LC compared with LC in general population. This could be easily explained as UIP is a common type of pulmonary involvement in RA (17).

This study has several limitations, most notably its retrospective nature and single-institution design, which may introduce potential bias in patient selection and will limit the generalizability of our results. Another limitation is that the duration and dosage of DMARDs treatment could not be obtained which may contribute to the development of LC and ILD. Further, survival analysis should be performed, and an identification of potential risk factors would be of value. However, survival data cannot be attained in several patients in the study.

Compared with LC patients without CTD, LC patients with RA were more likely to be diagnosed at an advanced stage and have a poorer ECOG PS score, and were less likely to receive surgery, radiotherapy, chemotherapy and targeted therapy.

Ethical Statement: The study was approved by the Institutional Review Board of Peking Union Medical Hospital (No. S-K253) and written informed consent was obtained from all patients.