Esophageal cancer is the ninth most common cancer worldwide (1). In general, there are two histological types of esophageal cancer: squamous cell carcinoma (SCC) and adenocarcinoma (AC). SCC is the predominant type of esophageal cancer worldwide, but the incidence of AC has increased tremendously and has in several western countries exceeded the incidence of SCC (1-4). In western countries, the primary risk factors associated with SCC are tobacco and alcohol use, low socioeconomic status and poor nutritional condition (1,5). This risk profile might contribute to an increased risk of perioperative complications and prolonged hospitalization.

Standard treatment for limited disease SCC is surgery, while treatment for locally advanced disease consists of a combination of neoadjuvant chemoradiotherapy and surgery, if tolerated by the patient (3). Surgical resection of the esophagus offers a curative potential, but the procedure is technically difficult and has reported 30-day mortality between 0.5–12% (6-11). The 5-year survival after resection for esophageal cancer ranges from 15–47% in previous reports, but with vast variations depending on stage and treatment (4,12).

Previously, the impact of postoperative complications on survival has been explored primarily in mixed populations with SCC and AC demonstrating conflicting results (11,13-15). However, the complication rate has been significantly higher in patients with SCC compared with AC in several studies (7,11,14,15). The aim of this study was to investigate the influence of postoperative complications on survival, following open esophageal resection, exclusively in a western population with SCC.

In a retrospective observational study, all patients undergoing open surgical resection for esophageal SCC at the department of cardiothoracic surgery at Rigshospitalet, Copenhagen University Hospital, Denmark, between February 2010 and December 2015, were consecutively included. Exclusion criteria were not established. Pre- and perioperative clinical data and mortality were registered as well as length of stay (LOS) in the intensive care unit (ICU) and during the entire hospitalization. Furthermore, all complications categorized as a Clavien-Dindo classification of 2 or more were registered for analysis.

We used the Clavien-Dindo criteria to grade the complications included in the analysis. The Clavien-Dindo classification ranges from grade 1–5; grade 1 defines any deviation from the normal postoperative course without the need for treatment, with the exception of simple regimens such as antiemetics, antipyretics, analgesics, etc. (16). Because we wanted to identify complications, which potentially could affect the postoperative course in a clinically significant way, we only included complications with Clavien-Dindo grade 2 or more. Anastomotic leakage was proven by water-soluble contrast swallow, computed tomography (CT) scan, gastroscopy or bronchoscopy. Infection was defined as suspected infection requiring prescription of antibiotics beyond the prophylactic antibiotics given in association with surgery. Sepsis and septic shock was registered, when these conditions were documented by the treating physician in the patient record. This was subsequently verified according to the systemic inflammatory response syndrome (SIRS) criteria (17). Delirium was defined as postoperative confusion and the use of haloperidol or similar antipsychotic drugs. Atrial fibrillation was defined as new postoperative atrial fibrillation verified on electrocardiogram and attempted either electrically or medically converted. Chylothorax was confirmed by biochemical analysis of fluid samples from the chest drain. Two patients had a splenectomy performed during the initial surgical procedure, which was not considered a postoperative complication.

Survival was calculated from time of index surgery to censoring date May 18, 2018. The survival analysis was performed using the Kaplan-Meier method including the log-rank test for comparing data. The Cox proportional hazard model was used to calculate the hazard ratio (HR) and 95% confidence interval (CI) of death for any of the complications included in the database. Categorical data were compared using the χ2-test or Fisher’s exact test. Continuous data were compared using logistic regression for parametric data and the Mann Whitney-U test for non-parametric data, respectively. Parametric data are stated as mean ± standard deviation (SD), and non-parametric data as median (25–75% quartile), unless otherwise specified. Ten percent of the database was validated by another member of the study group (ASF). Data were analyzed using SPSS version 24.0 (IBM SPSS Statistics, Armonk, NY, USA). A two-sided P value <0.05 was considered significant.

In the study cohort, 133 patients were enrolled. Patients had a mean age of 65 years and approximately two-thirds were male (Table 1). More than two-thirds of the patients had previous or ongoing use of tobacco and alcohol, and co-morbidities were common (Table 1). The majority of patients had received neoadjuvant chemoradiotherapy. As expected for the general characteristics for patients with SCC, body mass index (BMI) was within normal limits (22.4 kg/m2). Patients with and without postoperative complications did not reveal significantly altered demographics and preoperative characteristics, although BMI was on the verge of being significantly lower in the group with complications (Table 1). The 30- and 90-day short-term survival was 99% (two cases) and 96% (six cases), respectively. The estimated long-term survival was 37% in the 131 patients included in the long-term survival analysis. The estimated 5-year survival on the entire population was 57%, and actual 5-year follow-up was possible on 47% of the patients, which revealed a 5-year survival of 47%. Median follow-up was 39 months (range, 0.4–99.2 months). 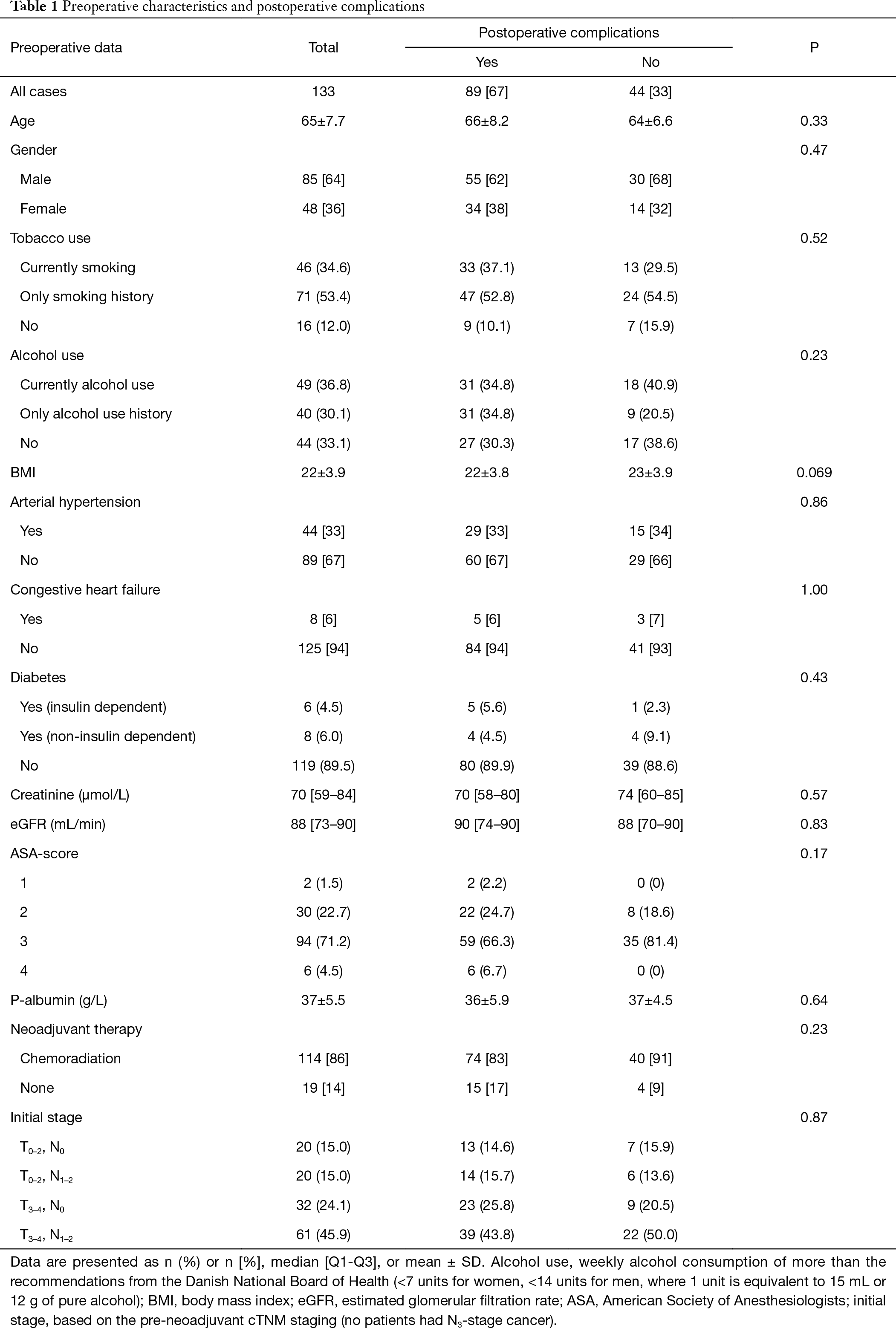 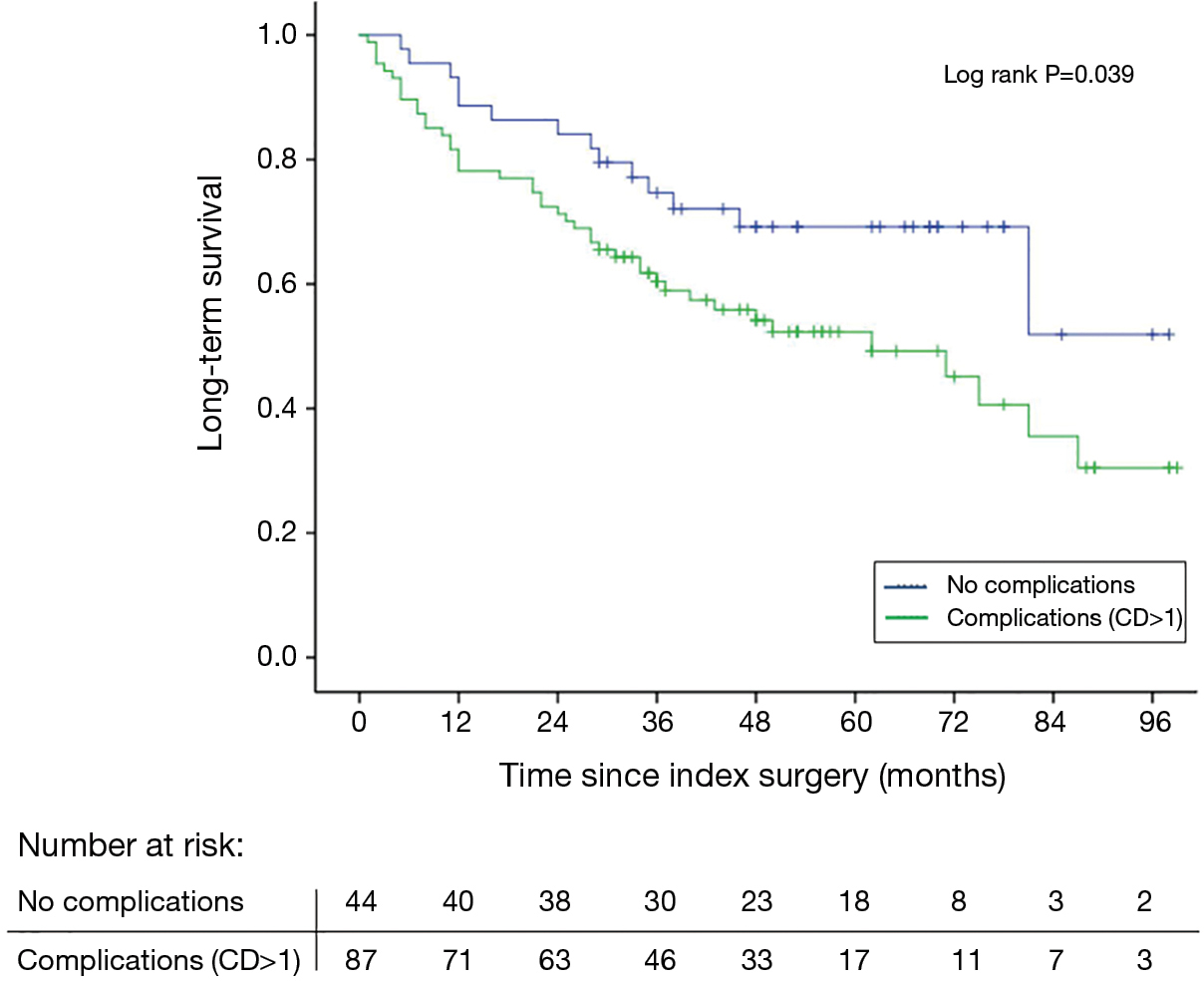 Figure 1 Kaplan-Meier survival curves including numbers at risk for the long-term survival according to postoperative complications. CD, Clavien-Dindo.

The type of complication significantly influenced the long-term survival. In this respect, patients developing an anastomotic leakage, sepsis or septic shock had a significantly higher risk of a poor outcome, while infection, delirium, atrial fibrillation and chylothorax were not associated with worse outcome (Table 3). 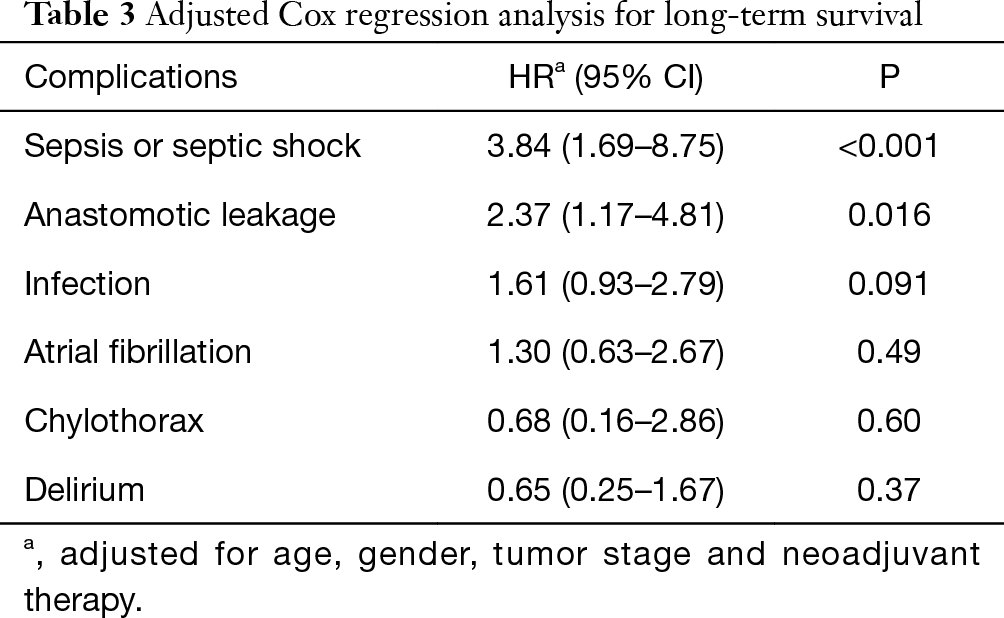 In the present study patients experiencing one or more postoperative complications during their index hospitalization for surgical resection of esophageal SCC, had a reduction in long-term survival of 22 percentage points compared to patients without complications. The development of sepsis/septic shock and anastomotic leakage were the most jeopardizing factors for survival. However, the overall 5-year survival of more than 55% was considerably better compared to the majority of previous studies.

Previous studies on mixed populations with both AC and SCC report 5-year survival rates from 15–47% (4,12). However, key differences exist between the two histological subgroups including patient characteristics and treatment protocols. The 5-year survival for SCC is normally worse than for AC (15,18,19). This has been related to differences in tumor location and prevalence of lymphatic spread, as well as patient comorbidity, with more tobacco and alcohol use and poor nutritional status among SCC patients (19,20). Quite interestingly, in this study there were no differences in preoperative patient characteristics among patients with and without postoperative complications. BMI was on the verge of being statistically lower among patients with complications. However, preoperative P-albumin, which is another marker of nutritional status, was comparable in patients with and without postoperative complications. This may suggest that the previously reported association of a low nutritional status and poor survival may be confounded by the fact that this is mainly observed in patients with SCC, and not a significant risk factor on its own (21,22). The improved survival observed in the present study could be due to a selected western patient population with for instance earlier detection of the disease. However, the majority of the patients (70%) were diagnosed with the more severe stages of cancer (T3−4; ≥N0), and 86% of the patients received neoadjuvant therapy prior to surgery. In previous studies neoadjuvant therapy was only given to 5–58% of the patients (7,8,11,13-15,23). However, recent studies demonstrate an improved long-term survival when using chemoradiotherapy in addition to surgery compared to surgery as the sole treatment (12).

Improved survival in our study could also be due to changes in hospital volume of esophageal cancer surgery compared to earlier studies. The benefit of an increased hospital volume on short-term survival has been demonstrated in several studies (6,9). At our institution we treat approximately 50% of the esophageal surgery cases in the Danish population, which previously was taken care of in several smaller hospitals. This has resulted in more than twice the number of patients per year (from 55 to 130) referred for esophagectomy, of which approximately 20% are SCC (personal communication). In the same period the number of thoracic surgeons performing esophagectomy has been reduced from four to three and the annual caseload per surgeon has therefore tripled. In the present study complication rates were equally distributed between surgeons. The improved survival is unlikely to be related to a single specific reason, but may be attributed to an optimized treatment in the multidisciplinary interventions provided by oncologist, surgeons and anesthesiologists in recent years (24).

The increased survival in the present study was seen despite a high incidence of complications, which was observed in 67% of the patients. Complication rates ranges in the literature from 16–67%, and almost consistently more common in SCC patients (11,15,25). The broad range of complications may be due to differences in classification and reporting of complications, as well as selection of study population (26). We used the Clavien-Dindo system to assess the complications for analysis due to the validation and widespread use in Europe (16).

The number of patients developing sepsis or septic shock was markedly higher in the present population compared to previous studies (11% vs. 4–6%) (11,15,27). At the same time the number of patients having suspicion of an infection was very high with more than half of the population treated with antibiotics in the postoperative period, and 19% of the patients with infection fulfilled the sepsis or septic shock criteria, indicating a certain immunological vulnerability of these patients following surgery. Whether the widespread use of antibiotics reflects true infection is unknown. Initiation of early empirical antibiotics have demonstrated improved outcome, both in patients with sepsis and intraabdominal infections (28), which may have let to pre-emptive activity. It has been proposed that the metastatic outbreak following resection surgery is due to postoperative immune suppression as well as the activations of pathways involving, i.e., IL-32 (29,30). This immunological susceptibility could also explain the high incidence of postoperative infections and sepsis in this patient cohort.

A limitation of this study is the retrospective observational design at a single institution and the relatively small sample size. The size of the cohort especially affects the numbers at risk in the Kaplan-Meier estimates, meaning that interpretation should be done with caution. A propensity score match could have added additional strength to the study, but because of the small sample size this was not appropriate. Another limitation is the outcome, survival, which is a rough parameter not discriminating the specific cause of death. An alternative outcome could have been cancer-related death, but specific information on cause of death was missing in many cases. Likewise, data reflecting cancer recurrence was not obtainable, since medical treatment and follow-up occur in a multitude of institutions.

One of the major strengths in this study is the homogeneity in terms of the histology in the patient cohort, perioperative treatment, and the fact that few investigators were involved in the data collection.

We found an improved 5-year survival in patients undergoing surgical resection for SCC compared to previous studies with mixed populations, despite a more frequent occurrence of complications. The presence of postoperative complications significantly reduced the long-term survival with 42%. The development of sepsis/septic shock and anastomotic leakage were the most jeopardizing factors for long-term survival.

Conflicts of Interest: this study has been presented at the 32th Annual European Association of Cardiothoracic Anaesthesiology (EACTA) Congress, Berlin, Germany, 20 April 2017.

Ethical Statement: All procedures followed were in accordance with the ethical standards of the responsible committee on human experimentation and with the Helsinki Declaration of 1964 and later versions. The Danish National Committee on Health Research Ethics waived consent. The Danish Data Protection Agency (RH-2016-169) and the Danish Patient Safety Authority (3-3013-1628/1) approved the collection and processing of patient data. Patients’ personal data is secured in accordance to national guidelines.