The 8th edition system is based on T, N and M categories and stage groupings (Tables 1,2), consistent with other caner types. The T categories are defined by the degree of invasion of the thymic malignancy into adjacent structures. These structures are grouped into “levels” of invasion; involvement at a particular level may or may not include multiple structures within that level, and may or may not include involvement of structures of a lower level. In part, this represents that involvement of lower level structures is logically present for certain tissues to be involved, but may be inconsistently reported (e.g., the mediastinal pleura must be traversed if the lung is involved). The N category is arbitrarily divided into anterior compartment nodes that are close to the thymus and deep nodes that are further away. The M category is divided into subpleural or pericardial implants and pulmonary intraparenchymal nodules or extra-thoracic metastases. 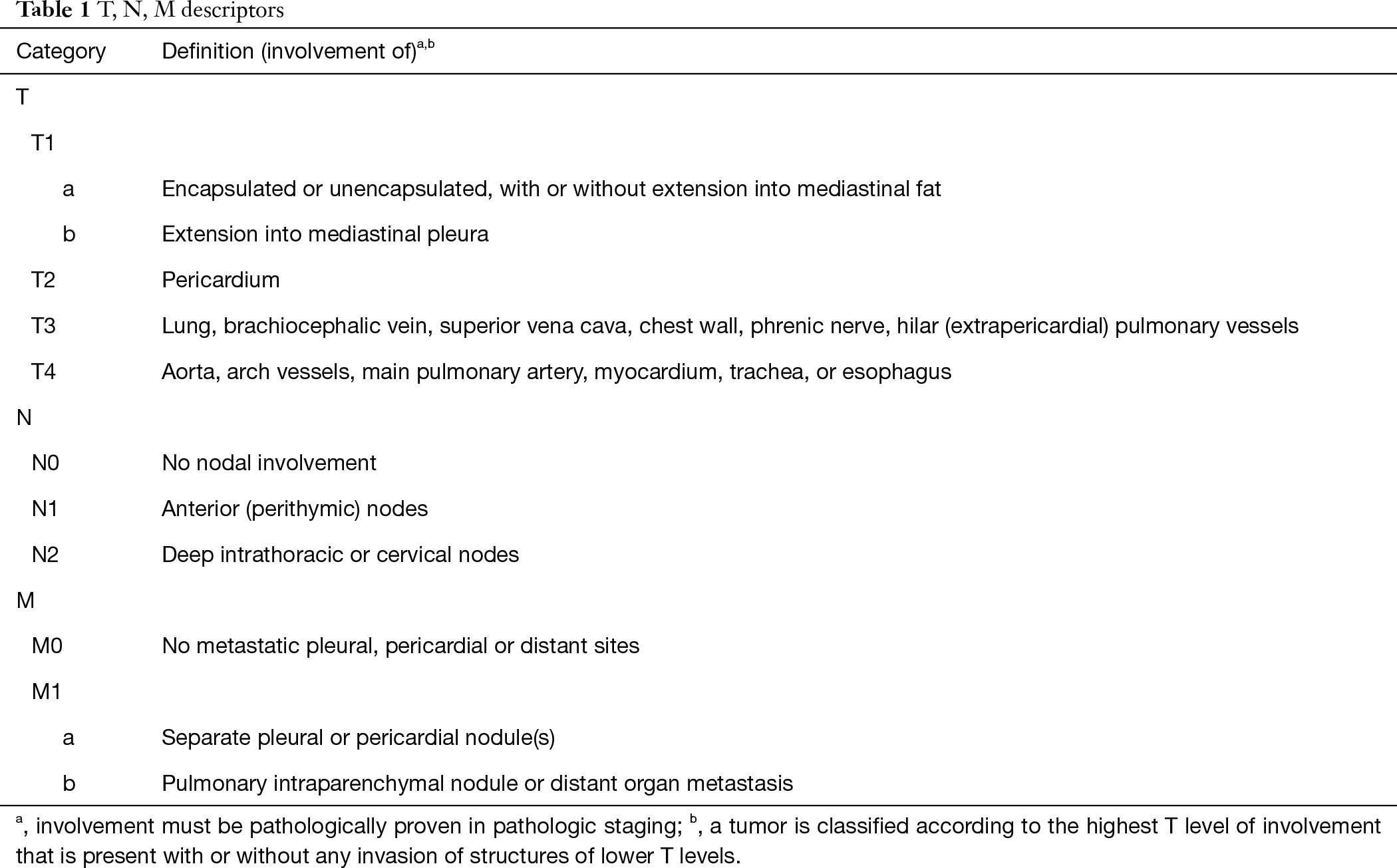 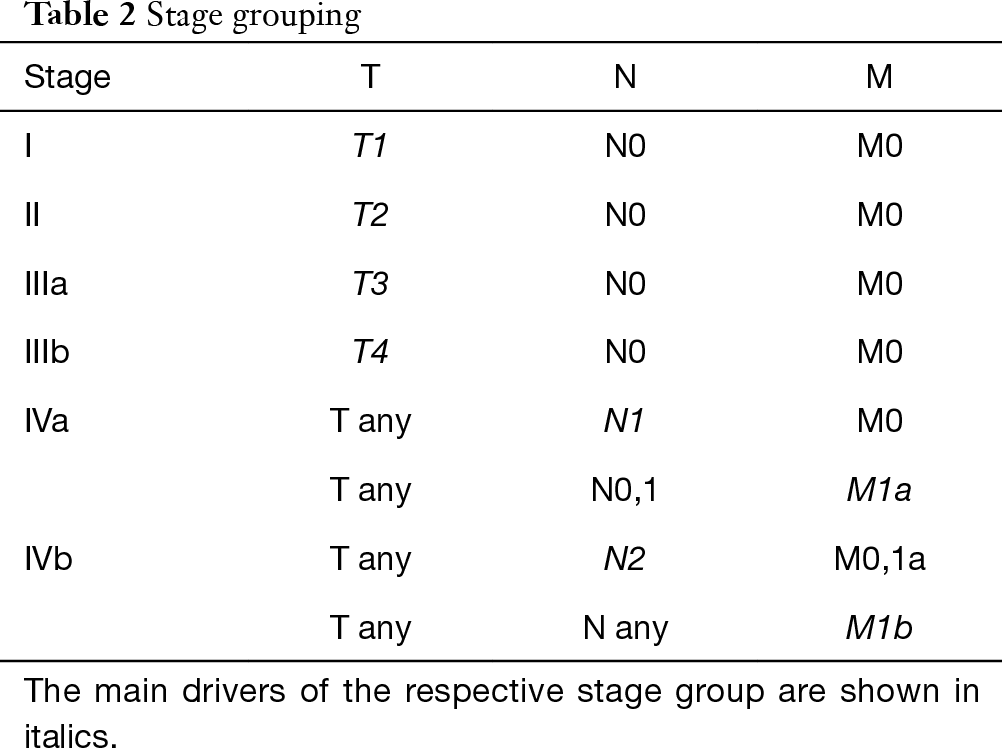 The foremost impact of the 8th edition thymic stage classification is likely that for the first time there is a worldwide uniform system. This should have a significant impact in promoting scientific understanding of the clinical behavior of these malignancies. The fact that many different stage classification systems were used inhibited the ability to pool data from multiple centers; additionally, previous systems were often ambiguously defined leading to discordant application even among centers that used the same schema. Collaborative research across multiple institutions is essential in a rare disease such as thymic malignancies.

The 8th edition stage classification system draws attention away from factors that are not relevant. For example, much energy was devoted to definition of nuances of capsular invasion. Invasion of the mediastinal pleura was also previously a major factor (based on a presumption that this presented an important barrier to the potential for pleural implants); however, this structure has proven to be hard to identify in many cases, and does not appear to be of prognostic value.

The IASLC-ITMIG system focuses on invasion of adjacent structures, which has also been a focus of previous systems. The new system provides further differentiation of levels of local invasion. However, many questions remain. It is difficult to define invasion by imaging in many cases; therefore, it is challenging to accurately define the clinical stage prior to resection. Further investigation is needed to understand the prognostic implication of invasion of specific structures (currently available data does not show clear differences between structures within a particular level). It is also unclear whether observed prognostic differences reflect a biologic implication of the degree of invasion, or if it merely reflects the ability to treat (i.e., completely resect) these tumors. An inherent difference in the ability to resect a thymic malignancy is probably an appropriate characteristic to define a stage category. However, a categorization that is based on treatment is likely to lead to inconsistent outcomes across institutions and over time if there is variability in surgical sophistication or institutional attitudes regarding management strategies and treatment aggressiveness.

A challenge that is inherent in the implementation of the new IASLC-ITMIG system is how to combine this with older data. This is not a shortcoming of the new system per se, it is an inherent issue whenever there is a change in a classification system. In fact, this is the reason why stage classification should only be altered periodically, based on robust assessment that a change is needed, and that the categorization is based on valid biological characteristics. It also largely reflects missing detail in older data if sufficient detail is available tumors from historical databases, these can readily be classified according to the new system; however, this is almost always missing.

How to accurately determine the clinical stage in thymic malignancies is poorly defined. Because clinical stage is what is available when treatment decisions are made, this is an important area for further research. Characteristics that have been identified for invasion into adjacent structures include tumor shape (round vs. lobulated), infiltration into surrounding fat and size, but more investigation is needed (6).

Tumor size is visually readily apparent and thus remains prominent in the initial assessment of a thymic malignancy. However, the implication of size is still questioned. Some individual institution studies suggested that size was of prognostic value while others did not. The large IASLC-ITMIG analysis could not demonstrate that size was important in either resectability or prognosis. However, this may reflect uncertainty and inconsistency in what the recorded tumor size measurements represent. Thymic malignancies are often not round—it is unclear what a single dimension of size refers to (largest dimension in any plane? Largest dimension among axial, coronal and sagittal planes? Largest in an axial plane?). Even 3 dimensions of size may not capture the full extent of thymic tumors, which frequently are draped around other mediastinal structures. Definition of a better parameter of size may unmask a prognostic effect that is elusive at present.

The node map that accompanies the 8th edition classification was empirically developed (7). It remains to be seen whether this is a useful way of categorizing degrees of node involvement. Assessment of this is hampered by the fact that intraoperative sampling/dissection of nodes has been inconsistently practiced. ITMIG has proposed standards for intraoperative assessment (8). Any suspicious nodes (e.g., enlarged, firm or PET avid) should be removed, separately labeled and submitted. Routine removal of any adjacent anterior mediastinal nodes is encouraged for thymoma in general; if there is T3,4 involvement an anterior mediastinal lymph node dissection is recommended, and systematic sampling of N2 nodes is encouraged. For thymic carcinoma systematic removal and separate submission of anterior mediastinal, intrathoracic, supraclavicular and lower cervical lymph nodes is recommended (8).

In summary, the new IASLC-ITMIG stage classification system for thymic malignancies represents a major step forward. It is based on a large number of patients and a careful analysis. It provides greater detail regarding invaded structures and the assessment of nodal metastases. It also underscores that the traditional focus on the capsule and mediastinal pleura is not helpful. A consistent worldwide system will enhance the ability to pool data across institutions. The new system provides a solid foundation to address unresolved questions, and undoubtedly will lead to better understanding and patient management over time.