A case of coronary arterio-venous fistula: the role of cardiac computed tomography

Coronary artery fistulas (CAFs) are often incidental findings in patients undergoing conventional coronary angiography (CAG). CAFs represent a congenital or acquired abnormal vascular communication of coronary arteries with cardiac chambers or any segment of the systemic or pulmonary circulation bypassing capillaries within myocardium (1). Patient may present with non-specific symptoms such as dyspnea or asymptomatic (2). The origin and the drainage site are important for patient management and eventually for clinical treatment. Unlike CAG, cardiac computed tomography (CCT) gives a comprehensive overview of coronary vessel course, diameter, and wall, not to mention the relationship with all the surrounding structures (3); ejection fraction and ventricular volumes can be quantified together with Qp/Qs ratio, kinetic alterations and perfusion analysis.

The RCA originated from the right aortic sinus and appeared diffusely dilated with a tubular pattern (maximum diameter 12 mm), tortuous and atheromatous with no significant obstructive stenosis, and terminated at the crux cordis into a large fistulous plexus (maximum diameter 45 mm) connected to coronary sinus (Figure 1). The fistula presented a knot-like shape involving both the coronary artery and the great cardiac vein (Figures 2,3). At rest perfusion analysis revealed a segmental transmural defect on the basal inferior myocardial wall adjacent to the coronary fistula (37.21±3.04 vs. 85±5 HU in remote septal myocardium) (Figure 1C,D). Moreover, a mixed eccentric plaque causing a significant stenosis was detected on the middle left anterior descending artery (LAD) with a significant hypoperfusion on the anterior myocardial wall (40±3 HU). Despite the preserved ejection fraction (70%) and global systolic function, both the left and the right ventricle were dilated (VTD =104.66 and 117.6 mL/m2); the Qp/Qs =1.1, calculated according to the method proposed by Osawa et al. (5), revealed a non-significant left to right shunt. There was neither myocardial wall alteration nor evidence of aortic dissection. 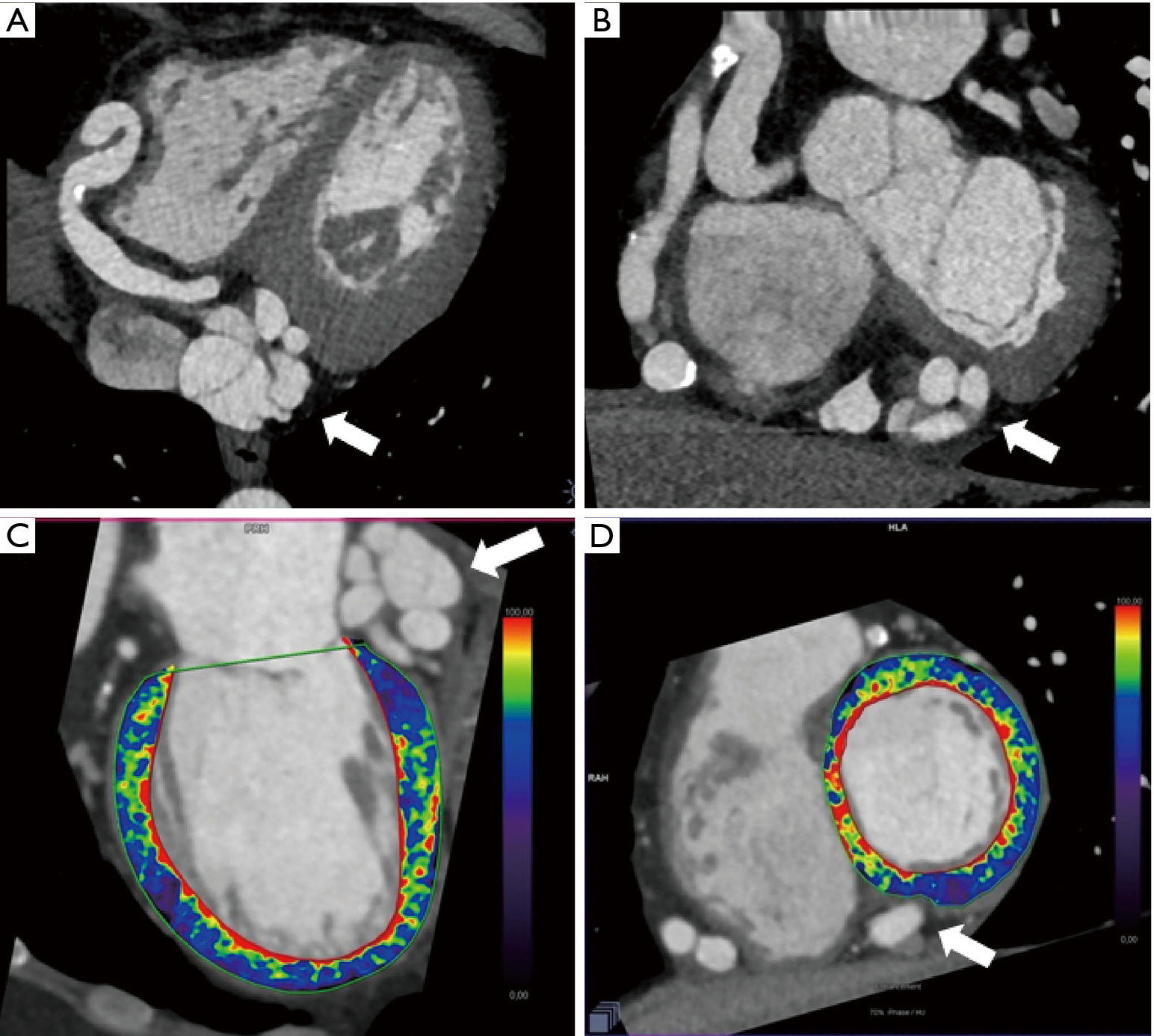 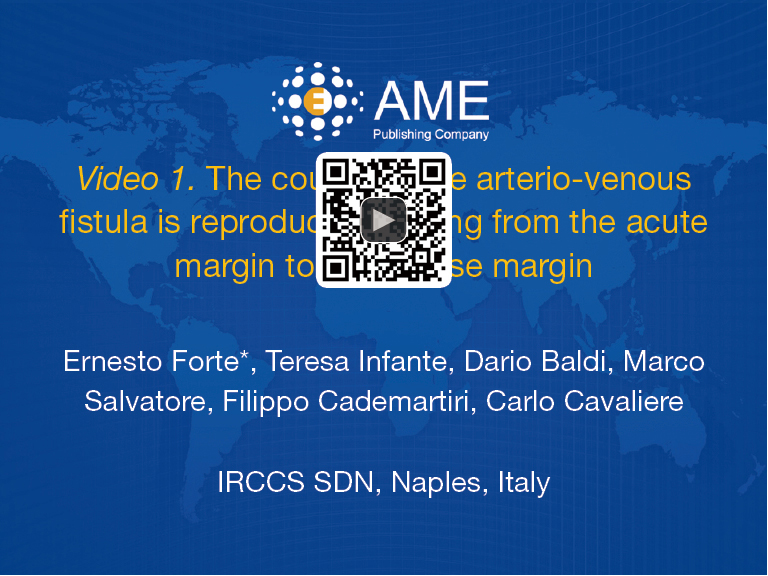 Figure 2 The course of the arterio-venous fistula is reproduced ranging from the acute margin to the obtuse margin (4). Available online: http://www.asvide.com/article/view/27403 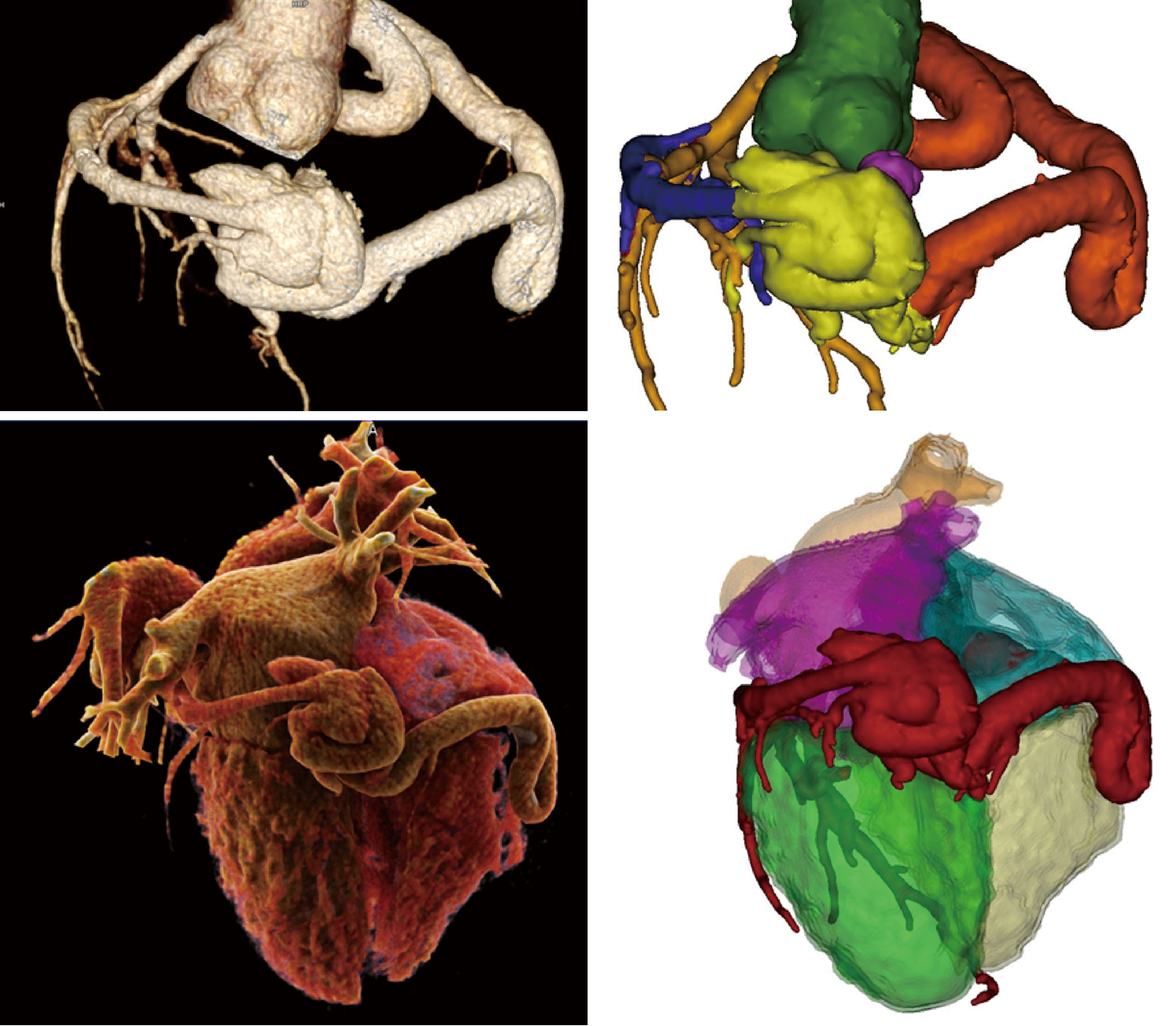 Even if most patients are asymptomatic, in some cases they present with typical signs (continuous heart murmur, right ventricular enlargement, cardiac dysfunction, endocarditis and arrhythmias) and symptoms (dyspnea, orthopnea, fatigue and chest pain) (6). Congenital CAFs are essentially due to persistence of sinusoids, which in normal heart nourish the trabecular myocardium but, at approximately 32 days of gestation, after myocardial compaction, are replaced by arteries, veins and capillaries (9). From a pathophysiological point of view, CAFs change course to myocardial blood flow causing its reduction downstream of the fistula with possible consequent ischemia to the supplied myocardial territories. Subsequently, the fistulous coronary artery can undergo a compensatory mechanism driven by the pressure gradient existing between the two communicating structures and leading to coronary enlargement or notable tortuous course, with several possible complications such as aneurysm development, atherosclerotic deposition, and even rupture in a few cases (2,10).

Medical imaging is fundamental to assess the location and size of the fistulas and allows the differential diagnosis of CAFs with other diseases presenting with dilated or tortuous coronaries as anomalous left coronary artery arising from the pulmonary artery (ALCAPA), Kawasaki disease, Takayasu arteritis and coronary artery ectasia related to atherosclerosis (1).

The reference standard technique has been represented by CAG (in absence of any alternative imaging technique to display coronary anatomy) by which, at the same time, both diagnosis and endovascular procedures can be performed. However, CAG is invasive, the anatomical relationships with surrounding structures are not visualized, and, even more important, the high flow of the fistula results in high flux of contrast agent with consequent decreased vessel attenuation so it can be very difficult to obtain a complete and sharp definition of the fistula itself. In the last decades, cardiac magnetic resonance (CMR) and CCT have been developed. CMR provides several tools to assess cardiac function and tissue characterization but coronary display is limited to the proximal course, mainly due to the lower CMR spatial resolution and contrast-to-noise ratio compared to CCT (1,11). Moreover, MRI of the coronary arteries is markedly limited by trigger and motion artifacts, it is time consuming and still represents a research field not being widespread in clinical practice. Despite the use of ionizing radiation, CCT is the non-invasive reference standard for the imaging of the coronary tree; the volumetric approach and high spatial resolution of CCT render quite easy to show coronary anomalies and the presence of coronary artery disease (12). The cutting edge technologies have led to both morphological and functional analysis, fast acquisition, implementation of low-dose protocols and good image quality also in patients with high heart rate.

As regards at rest perfusion analysis, even though it is able to identify resting perfusion defects associated with previous myocardial infarction and resting ischemia due to hemodynamically significant coronary stenosis, it is based only on Hounsfield unit measurements and is very prone to artifacts so ischemic myocardium may go undetected and a vasodilator stress CT perfusion imaging is needed to definitively evaluate for ischemia (13).

In our case, CCT allowed an accurate diagnosis revealing a large fistula draining in to the coronary sinus associated to a significant obstructive coronary artery disease. The RCA appeared markedly dilated with several calcifications and multiple kinkings and the LAD presented a significant obstructive stenosis. Cardiac function analysis showed that both the right and the left ventricle were enlarged but the ejection fraction was preserved and there was no significant left-to-right shunt, even though biventricular volumes resulted increased. Moreover, perfusion analysis unmasked the abovementioned myocardial steal phenomenon.

The management of CAFs include close monitoring, generally in asymptomatic patients, and treatment by surgical ligation or percutaneous transcatheter closure with occlusion coils or umbrella devices in case of symptoms, unfavorable features or evidence of large shunt (Qp/Qs >1.5) (6). In our case, the patient was recommended to a specialist consult after which a conservative management with follow up surveillance examinations was advocated.

Funding: This study was supported by the grants from the Italian Ministry of Health (Project Code: GR-2011-02349436).