In recent years, radical pleurectomy/decortication (P/D) for surgical treatment of patients with resectable malignant pleural mesothelioma (MPM) has been increasing (1,2). The outcomes of P/D are reported to be comparable to those of extrapleural pneumonectomy (EPP) with no significant difference in survival of patients with MPM (3-11). Macroscopic complete resection (MCR) in any surgical procedure for resectable MPM is critically important (12-14). While both P/D and EPP remove the parietal pleura similarly, P/D removes the visceral pleura with preserving the lung parenchyma. Visceral pleura is excised macroscopically by surgeons, and resected specimens are analyzed histopathologically.

The visceral pleura consists of five-layers: mesothelial and medium subcutaneous layers, elastic plate, connective tissue and basement membrane (15). It is important to evaluate where in the five layers lies the actual dissection plane in P/D. There are no reports evaluating the pathology of the visceral pleura after P/D for patients with MPM. In this study, we examined a pathological assessment of surgically removed visceral pleura in P/D and added survival analyses according to the pathology.

Visceral pleura of consecutive 25 patients with MPM who received radical P/D under the setting of multimodality treatment consisting of surgery and postoperative chemotherapy at Tokyo Medical and Dental University Hospital between April 2010 and April 2018 were studied. The pathological stage was evaluated based on the IMIG staging system, and histological classification was based on the WHO classification (Table 1). Among these patients, there were 20 cases of epithelioid tumor, 1 of desmoplastic tumor and 4 of biphasic tumor. Nine patients had stage I MPM, one had stage II, 11 had stage III, and 4 had stage IV. Clinical records of all patients were fully documented. 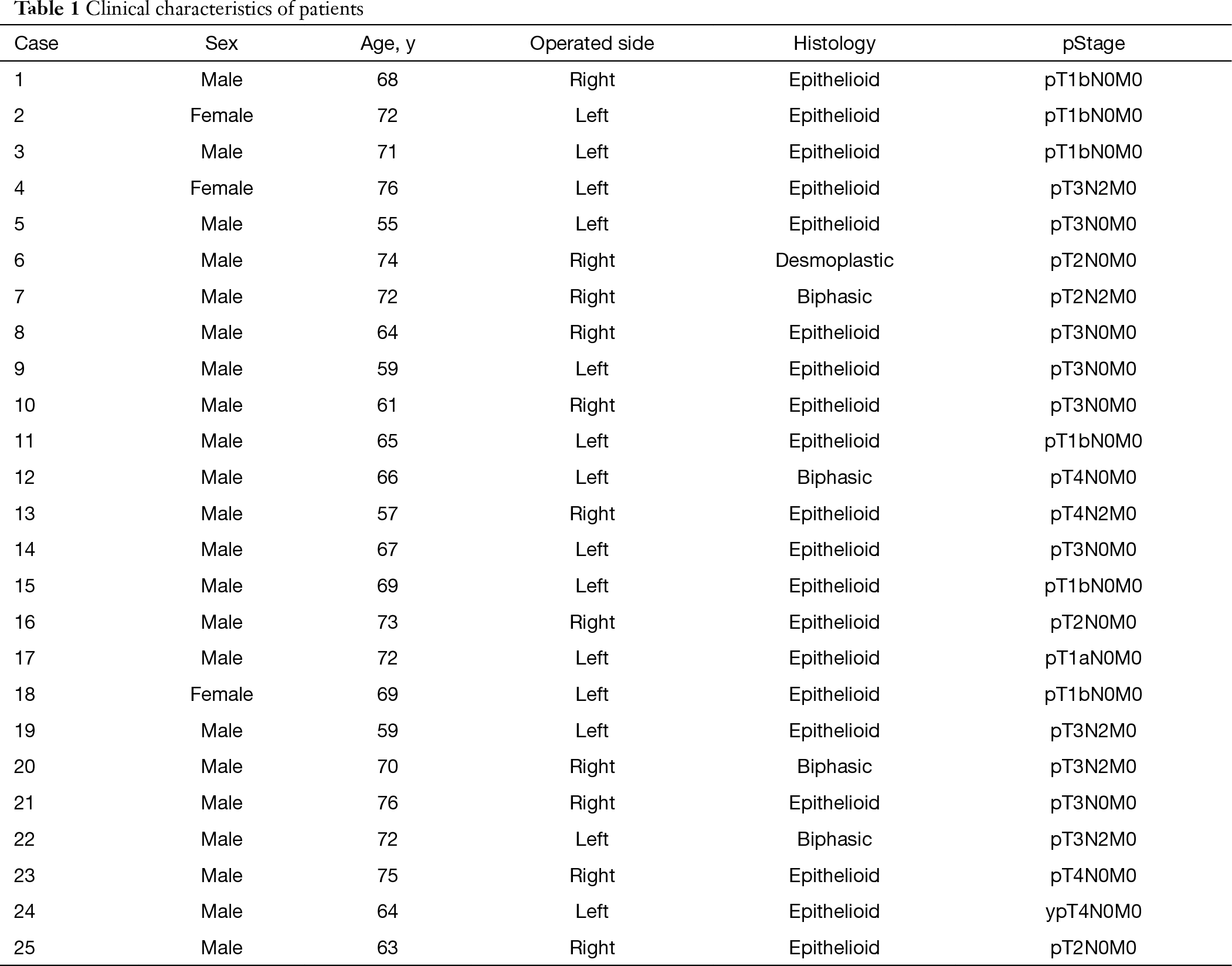 This study was approved by the Ethics Committee of Tokyo Medical and Dental University (No. M2000-1097), and informed consent was obtained from all the patients.

All enrolled patients underwent P/D as their initial surgery. P/D was performed via a wide posterolateral thoracotomy through the sixth rib bed and additional incision at the ninth intercostal space. The parietal pleura was exfoliated radically, and the costal pleural layer was segregated from the endothoracic fascia. All the visceral pleura were removed by a blunt dissection to clear the tumors, leaving the lung parenchyma intact. The diaphragm or pericardium was resected and reconstructed, when the tumor invaded macroscopically. Finally, all patients received intraoperative intrapleural hyperthermic cisplatin perfusion for one hour (2). MCR was obtained in all patients.

In this study, only visceral pleural lesions were evaluated. Whole removed pleura including adjacent tissue after P/D was fixed in the formalin in the operating room. A few days later, both surgeons and pathologists identified the parietal and visceral pleura together in the pathology lab. At least two specimens of visceral pleura each lobe were obtained for histopathological analysis. We examined a total of 99 lesions in 45 lobes from 25 patients at the following sites: right upper lesions (n=20), middle lesions (n=14), lower lesions (n=20), left upper lesions (n=22), and lower lesions (n=23) (Table 2). Microscopic examinations were made from slides stained with both hematoxylin-eosin (H&E) and Elastica van Gieson (EVG) stains according to standard protocols. The decision to separate the pleura from the parenchyma was based on the macroscopic invasion of the disease. We defined the involvement of the visceral pleura using the depth criteria (Figure 1); type D0: no tumor involvement in the pleura; type D1: tumor involvement is not reaching the elastic plate; type D2: tumor involvement between the elastic plate and the basement membrane and type D3: tumor involvement up to the lung parenchyma. The structures of mesothelial and medium subcutaneous layers, elastic plate, connective tissue, basement membrane, lung parenchyma, and the separation of the pleural surfaces were pathologically evaluated by H&E and EVG staining of the pleura in 99 lesions collected from 25 patients. The stained sections were examined by two authors (M Kobayashi and C Takasaki) without knowledge of the patient characteristics. 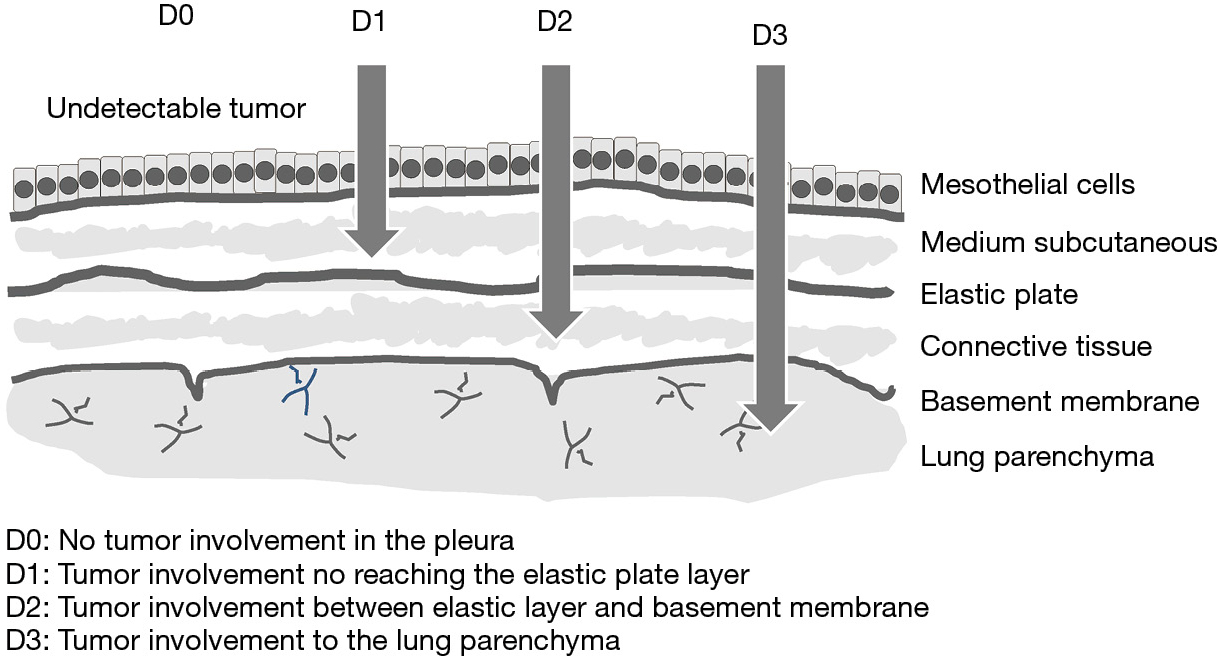 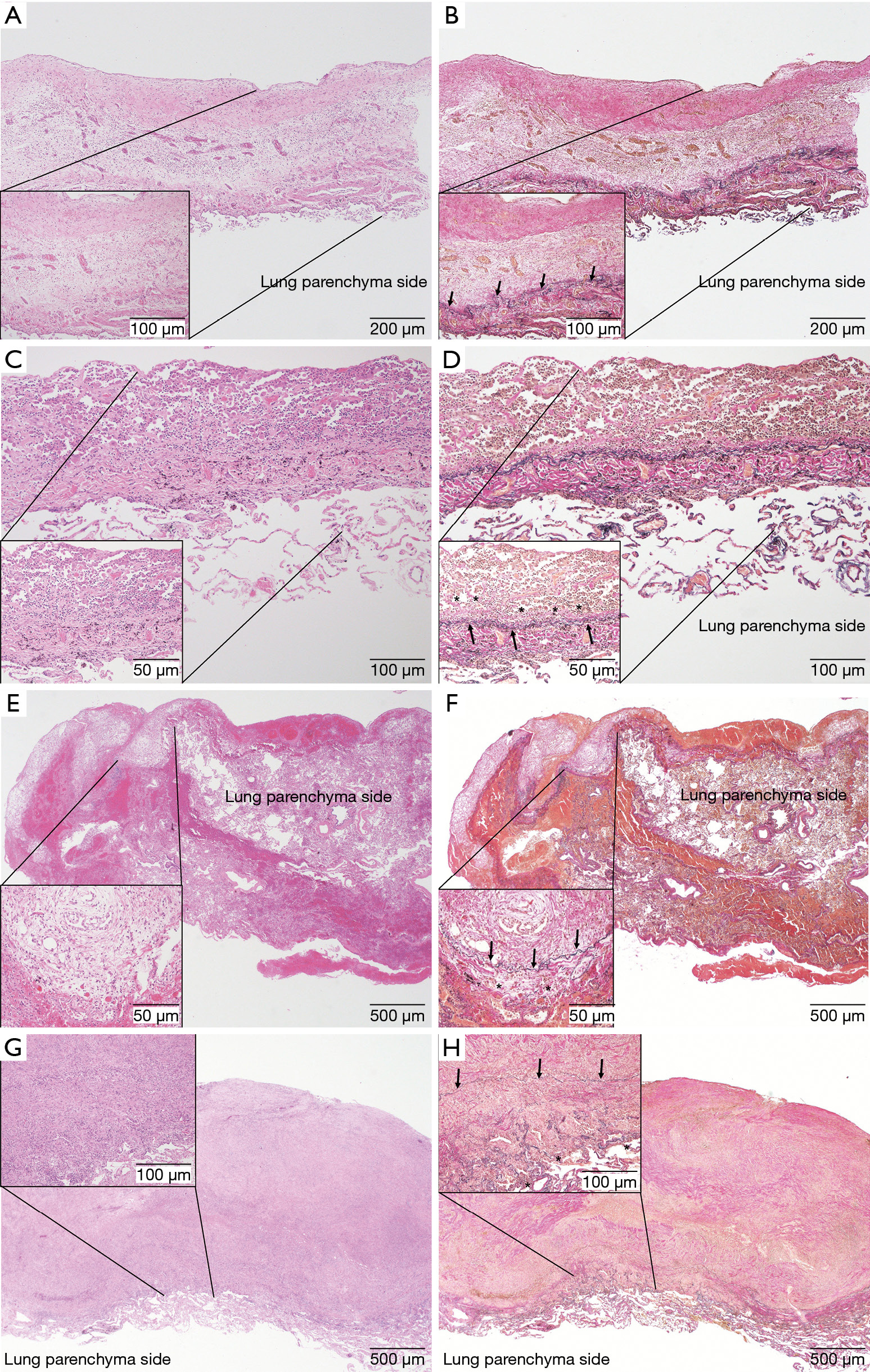 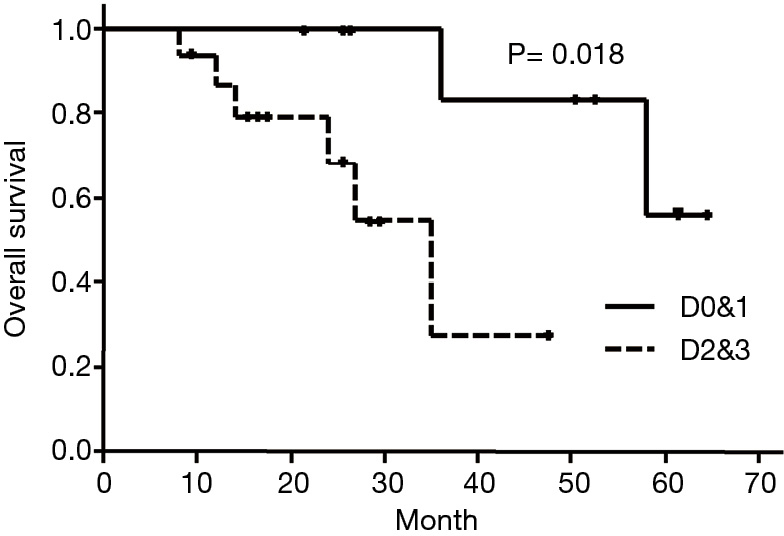 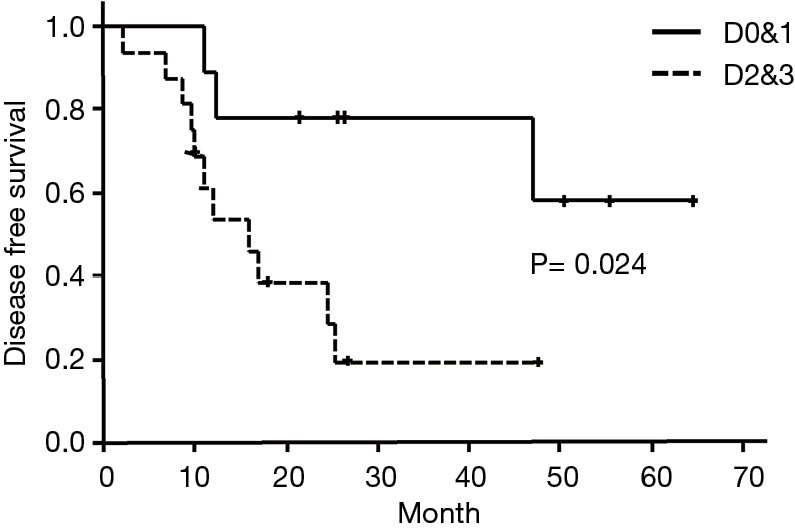 In addition to pathological assessment of visceral pleura, we analyzed the relationship between depth of the tumor invasion and prognosis. Tumor involvement into elastic plate influenced poor prognosis and high recurrence rate. The depth criteria of visceral pleura could help us in classifying pleural invasion histologically and possibly predicting the prognosis.

This study has several limitations. First, it had a small number of cases from a single institution. Future collaborative research using larger sample sizes to obtain an agreement of dissection plane of the procedure. Second, not all of the visceral pleura were microscopically examined in the MPM patients. Third, being a retrospective study, a patient bias could have existed.

In P/D for MPM, the dissection plane of visceral pleura was the lung parenchyma regardless of tumor involvement. Pathological assessment with the depth criteria of pleural invasion would provide a classification of pleural involvement and an estimate of the prognosis.

Ethical Statement: This study was approved by the Ethics Committee of Tokyo Medical and Dental University (No. M2000-1097), and informed consent was obtained from all the patients.