Primary pleural liposarcoma (PPL) is an uncommon tumor. The pleomorphic variant of PPL is difficult to diagnose due to a nonspecific clinical presentation and radiologic manifestations simulating a pleural collection of different etiology.

The first case of PPL was reported by Ackerman and Wheeler in 1942. Less than 20 cases of PPL have been described in the literature.

We are presenting the case of a female patient with the pleomorphic variant of a PPL.

A 49-year-old female patient with thoracic pain and dyspnea for 3 months. The chest X-ray showed a left basal opacity of lobulated contours, compatible with an extrapulmonary mass. The thoracic computer tomography (CT) scan showed a left pleural collection/mass, of 18 HU density and passive pulmonary atelectasis (Figure 1). At surgery a pleural mass (19×10 cm) of gelatinous consistency was found. Histopathological findings confirmed the diagnosis of a pleomorphic variant of pleural liposarcoma (Figure 2). The patient showed evidence of tumor recurrence 6 months after surgery. 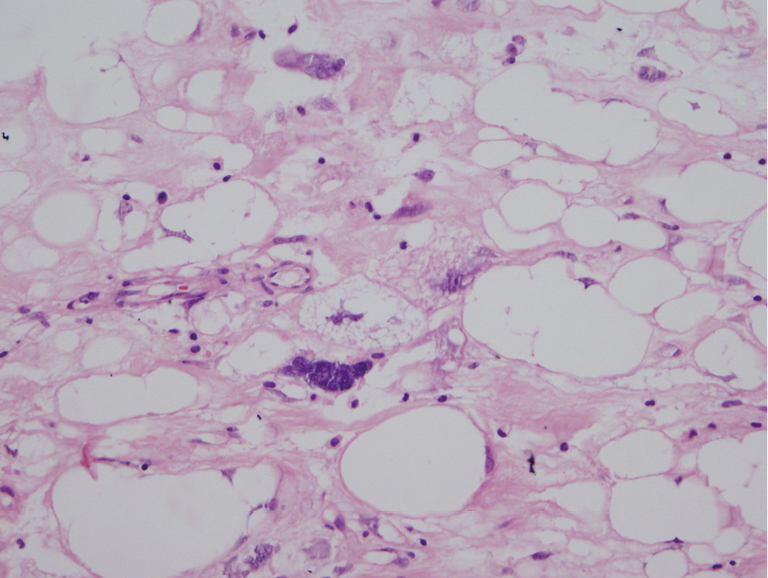 Malignant primary pleural neoplasms represent 10% of the pleural tumors. Mesothelioma is the most frequent tumor in this group (90%) (1). Primary pleural sarcomas and lymphomas are also described. Sarcomas originating in the pleura are rare and include: liposarcoma, synovial sarcoma, malignant fibrous histiocytoma, primary neuroectodermal tumor/Ewing’s sarcoma, angiosarcoma, chondrosarcoma, osteosarcoma and leiomyosarcoma (2).

There are less than 20 cases of PPL described in the literature. In 16 documented cases of PPL it was more frequent in men (11 men and 5 women), between the ages of 19 and 80 years (average of 50 years).

Liposarcomas, including the one originated from the pleura, are thought to derive from residual primitive mesenchymal tissue. Malignant transformation of a preexisting lipoma, parietal pleural adipose tissue or subpleural fat, are considered alternative hypotheses for the pathogenesis of PPL (2,3).

Macroscopically, PPL is nodular, lobular and has a gelatinous appearance. A series of four patients by Okby and Travis, describes tumors with largest diameters of 16 to 20 cm and weighing up to 1,868 g (3). The pleomorphic variant of PPL is characterized by the presence of a background of pleomorphic spindled and rounded cells and a variable number of pleomorphic lipoblasts (often multivacuolated lipoblasts with bizarre scalloped nuclei), positive to immunohistochemical markers (S100) (2,4). Mesothelioma must be considered as a differential diagnosis.

PPL grows slowly inside the pleural cavity and patients remain asymptomatic for prolonged periods of time. Clinical manifestations are delayed and nonspecific (cough, dyspnea and chest pain) and are related to displacement and compression of adjacent structures. PPL can be an incidental finding on imaging studies.

There are no series reported on the literature reviewing imaging manifestations of PPL. Due to the size these tumors can reach, the imaging approach is difficult (particularly chest X-rays). In early stages, chest X-rays can show an extra-pulmonary opacity. In CTs it is described as a mass of heterogenous density, with soft tissue and fat attenuation coefficients (2). Macroscopic features of the pleomorphic PPL variant can make the diagnosis difficult, due its appearance of pleural collection on CT, without fat attenuation coefficients.

The treatment of choice for PPL is radical surgery and radiotherapy. Surgical therapy alone results in local recurrence in about 70% to 90% of the cases. The series by Wong et al. showed 5-year survival of 71% for the myxoid and well differentiated PPL, compared to 12.5% for the other subtypes (3,5).

This case shows evidence of the importance of considering the pleomorphic variant of PPL among the differential diagnoses of a large, homogeneous pleural collection/mass, with attenuation coefficients above water, in the context of patients with nonspecific respiratory clinical signs or symptoms and without an important clinical record.